4 September 2013
71
On September 2, the international defense industry exhibition MSPO 2013 kicked off in the Polish city of Kielce. However, one of the main novelties of this event was shown to the public the day before. The Polish consortium of defense enterprises, even before the opening of the exhibition, demonstrated its new development - tank PL-01.


The beginning of the creation of a new project of armored vehicles was announced in mid-February of this year. As it was reported then, the enterprises OBRUM, Bumar and Huta Stalowa Wola will create a promising tank for the armed forces of Poland. A little later, in May, a cooperation agreement was signed with BAE Systems Corporation. Specific information about the project in February was extremely scarce. Polish industrialists only announced that the finished machine will have a combat weight of about 45-50 tons, the fighting compartment will be uninhabited, and the ammunition will be located in an isolated aft compartment. Then the first images were shown, created on the basis of opinions at that time regarding the appearance of a promising combat vehicle. The tank in the pictures partially resembled another Polish development, the Anders armored car, and, apparently, should have been a rethought and significantly revised version of it. 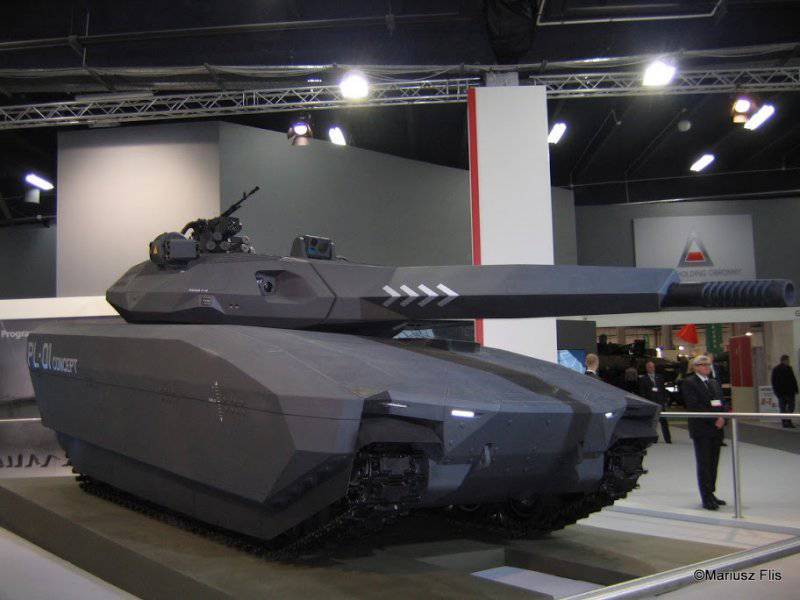 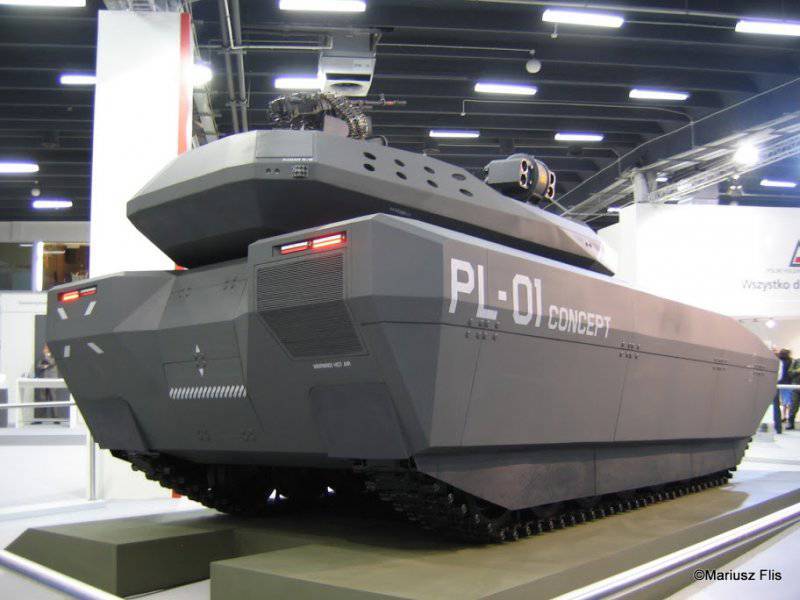 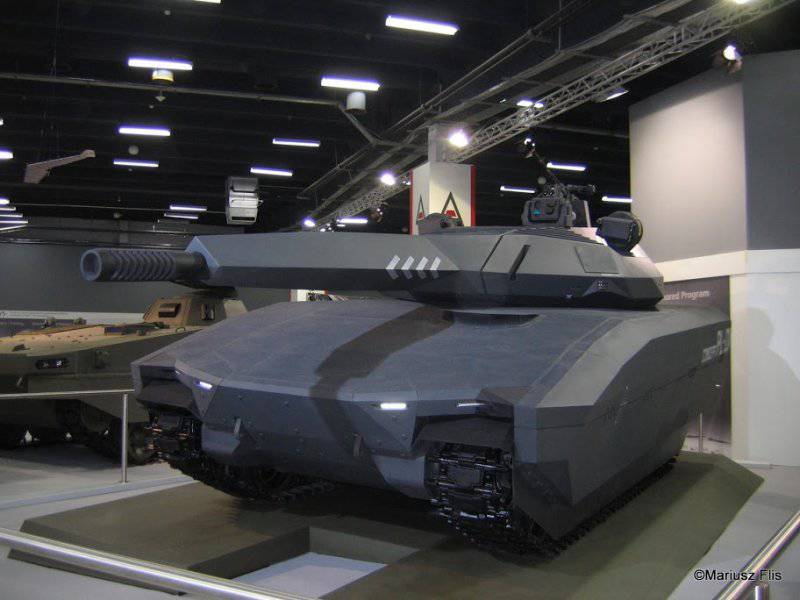 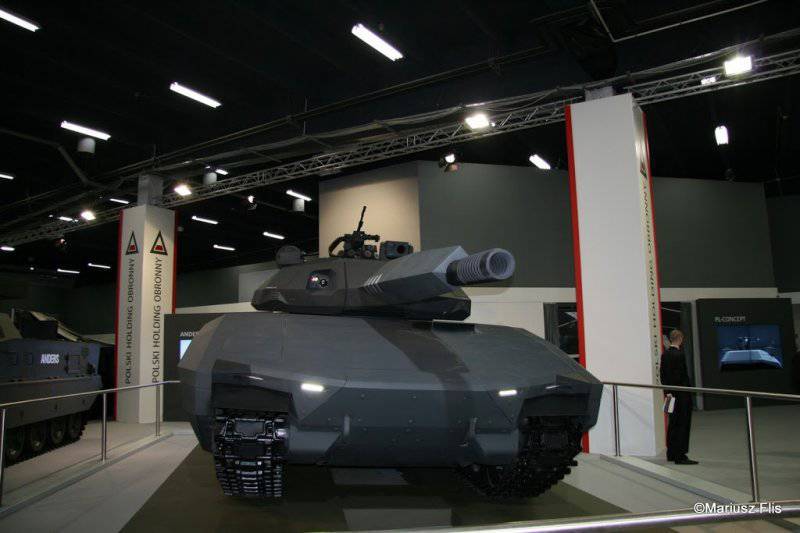 After the February presentation, the project of a promising Polish tank temporarily disappeared from sight and reappeared in the news only after its layout was built and shown at the exhibition. In general, the model brought to the MSPO 2013 showroom resembles what was shown in February this year. However, it also has a number of differences. Probably, the Polish tank builders took into account the peculiarities of certain decisions and changed some aspects of the appearance of a promising armored vehicle.

The project of the new Polish tank PL-01 is still far from practical application, but its main features have now been identified and, most likely, will not change. A cursory inspection of the layout presented at the exhibition suggests that the project actively used developments in the previous Polish tank Anders, which was once considered an advanced design that could dramatically improve the condition of Polish armored forces.

In general, the PL-01 repeats the overall layout of the Anders tank. The engine-transmission compartment (MTO) is located in front of the armored hull, and the rest of the volume is allocated for the accommodation of the crew and ammunition. In favor of the version of the front arrangement of the MTO, both the characteristic front part of the machine with the driver's hatch shifted back, and a certain hatch in the rear hull sheet. In the Anders project, the latter was intended either for loading ammunition (the project of a promising tank) or for landing a landing (in the BMP variant on the base of the tank). Judging by the available information on the placement of the entire crew inside the armored hull, this hatch can be used for landing the commander and the gunner.

On the characteristics of the reservation provided by the project PL-01, too early to say. The presented layout does not allow to judge about this parameter of the project, and official information was not disclosed. Probably, as on other modern tanks, the most powerful booking is supposed to be installed in the frontal part of the hull. A large angle of inclination of the upper frontal part can also improve the characteristics of frontal projection protection. On the sides of the layout shown are large screens of relatively large thickness. Judging by the size and appearance, these units carry multi-layer combined booking and are designed to increase the likelihood of a car surviving in the event of an attack by modern anti-tank weapons.

The hull and tower of PL-01 have a characteristic shape formed by several intersecting planes. The reasons for this technical solution are not entirely clear. Probably, the project took into account the possibility of reducing radar visibility. However, there is another version, according to which the unusual appearance of the tank is due to the purely aesthetic views of the authors of the project. One of the most controversial decisions within the original appearance was the gun cover. The characteristic quadrangular design of the chopped shape is significantly different from the solutions used in modern tanks. Including this fact can also serve as confirmation of the aesthetic version of the origin of a number of units.

The original casing covers, allegedly, 120-millimeter smooth-bore gun. For the front sheet of the casing goes only a small section of the barrel of the gun and the muzzle brake. The surfaces of the casing and the mask of the instrument, directly connected with each other, smoothly pass into the upper and lower sheets of the reservation of the tower. The tower itself is equipped with a developed aft niche. In it, probably, as in one of the variants of the Anders tank, it is planned to place the ammunition and part of the autoloader units. On the roof of the tower is a rotary remote-controlled turret with a rifle caliber machine gun and smoke grenade launchers. In addition, on the roof of the tower, near the sides, there are two units with some equipment, similar to video cameras or other similar equipment. As can be seen from the design of these devices, they can rotate around a vertical axis and swing in a vertical plane. Another unit with optical systems is located in front of the tower, next to the gun mask. The deployment of the crew inside the armored hull requires appropriate measures in relation to means of monitoring the environment. Probably for this very purpose, the PL-01 tank has a developed system of video and thermal imaging cameras.

For pointing the gun, most likely, the systems installed above the gun, as well as some devices to the right of it, are used. On the front of the tower, to the right of the gun, there is a small niche with two certain devices. To the left of the cannon, a large vertical slot is provided in the turret, apparently intended for a machine gun paired with a cannon.

It is known that the PL-01 tank will receive a promising foreign-made fire control system, an active defense system and a number of other important systems. There is every reason to believe that the creation of a complex of electronic equipment in the framework of the project of a promising Polish tank will be handled by the international corporation BAE Systems. Exact information about this collaboration and the role of the corporation in the project has not yet been announced.

The project PL-01 is still at the stage of early design work. In the near future, the Polish tank-building consortium will show only a mock-up at showrooms and exhibitions. Construction of the prototype will begin only after a few years. Trials are scheduled to begin no earlier than 2016. If all the works go according to the schedule, then in the 2018 year the deliveries of serial PL-01 to the customers will begin. In view of the early stages of the project, it is too early to say who will acquire the new Polish tanks. Most likely, the Polish Ministry of Defense will be their starting customer, after which you can wait for orders from third countries.

In the light of the information currently available, the project of a prospective Polish tank looks interesting, but at the same time ambiguous. The stated characteristics and conclusions that can be drawn from the appearance of the existing layout undoubtedly make PL-01 an interesting project. At the same time, the state of Polish tank building and the absence of any major successes in the past years cast doubts on meeting the deadlines or even the very possibility of successful completion of a new project. However, all such assumptions may be biased and do not reflect the actual state of Polish tank-building enterprises. Therefore, it is worthwhile to wait a little with the conclusions and wait until the Polish tank-building consortium and its foreign colleagues announce the completion of one or another phase of the project.

Ctrl Enter
Noticed oshЫbku Highlight text and press. Ctrl + Enter
We are
In the footsteps of the exhibition Eurosatory 2016: trends in the development of armored vehicles. Part of 3Wunderwaffe for Pantservaffe. Description of the design of the tank "Mouse"
Military Reviewin Yandex News
Military Reviewin Google News
71 comment
Information
Dear reader, to leave comments on the publication, you must to register.