August 30 2013
32
On Wednesday, August 28, a test of the new Russian bridge bridge IMZH-500, which should go into service with the Russian army already in 2014, took place at a military training ground near Yaroslavl. State tests of prototypes of property and special equipment of railway troops were held at the site. For these purposes, new special equipment was introduced on the Norsky Peninsula, which is intended for the construction and repair of railway lines both on land and on water.


According to the Office of the Press Service and Information of the Russian Ministry of Defense, as part of the demonstration of engineering equipment near Yaroslavl, a tactical and special exercise was held with a pontoon-bridge railway battalion from a separate railway brigade ZapVO. During the exercises, a flood railway bridge was built across the Volga. And the culmination of the test exercises of the IMZh-500 bridge-flyover, half a kilometer long, thrown across the Volga, was the pass of a military echelon with various military equipment, as well as the pass tank and automobile columns under the influence of sabotage groups and aviation conditional adversary. 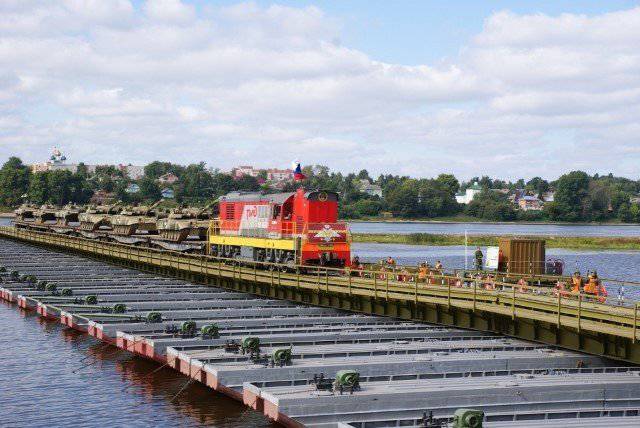 The main experimental object and the real “nail” of the test program was the modern bridge-bridge IMZH-500, which was installed at an altitude of 8 meters. The collapsible construction of the bridge was designed by Moscow specialists, and all the necessary structural elements, which so far exist only in a single copy, were made in Bryansk at the 192-th Central Railway Equipment Plant. According to Sergey Solovyov, who is the chief engineer of the railway forces of the Russian Defense Ministry, the military railway workers began work on a fundamentally new, pre-fabricated bridge construction in 2009 year. By 2013, their work reached the stage of state trials.

Sergei Solovyov told reporters that the old version of the bridge, which was designed as early as 1960-70, had the designation REM-500. At present, this development does not correspond to the level of modern loads, only trains can move along it, while for wheeled and tracked vehicles, this bridge is impassable. At the same time, the new design of IMZH-500 is completely devoid of these shortcomings. Under the new overpass bridge, both military echelons and armored vehicles and cars can safely move. According to Solovyov, all samples of Russian equipment currently in service can be transferred to a given area using a new bridge. 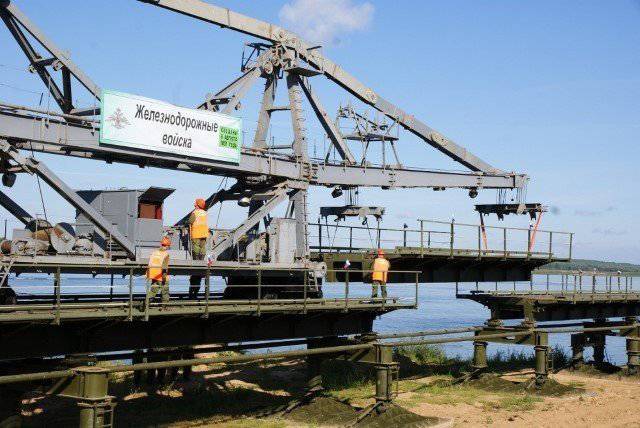 Moreover, such a transfer of military equipment can occur at a sufficiently high speed. For example, railway trains can travel on this bridge at speeds up to 50 km / h, a tank can reach speeds up to 60 km / h. In just one day, this bridge is able to miss more than 40 60-wagon trains with various military equipment and troops (weighing up to 4 thousand tons), as well as more than 5 thousand trucks and up to 2,5 thousand tanks and other tracked vehicles. A significant advantage of the new army bridge is the fact that the maximum height of its metal supports is equal to 14 meters.

Sergey Solovyov noted that the modern bridge-bridge IMZH-500 will go into service with the Russian bridge railway battalions and will be used on the technical cover of the railways. IMZH-500 is designed for the rapid organization of bridges in a variety of hydrogeological conditions. An experimental model of this bridge should soon complete a set of state tests and examinations. These bridges will appear in the state defense order from next year. There is nothing strange in this, given that the Supreme Commander of the Armed Forces of the Russian Federation had previously been given the task that before the 2020 year in all types of aircraft, including railway troops, the share of the delivered modern technology reached 70%. 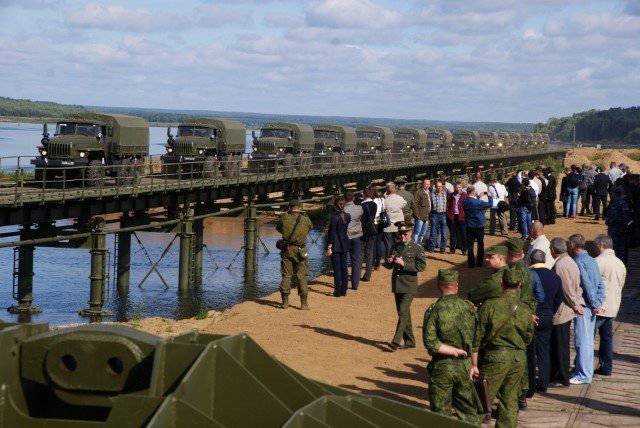 Judging by the statements of the representatives of the armed forces of Ukraine and Belarus present at the exercises and tests of the new bridge, these two states are also ready to replace the outdated SEM-500 with new Russian structures. “Good speed characteristics, good increased load, the possibility of passing tanks and cars on the bridge ...” - Alexander Tsekhovsky listed the main advantages of IMZH-500, being the head of the department of the State Transport Service of Ukraine. According to him, the Ukrainian armed forces are also interested in acquiring such engineering structures and modernizing their own railway units.