Russian optics on the rise 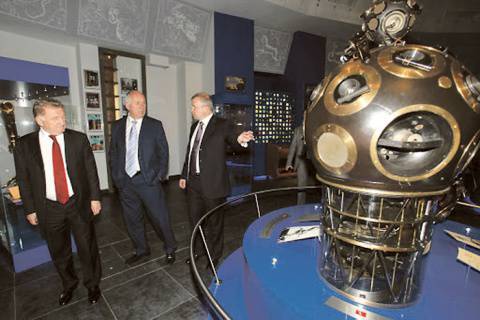 Four days later, the XI International Aviation and Space Salon MAKS-2013, which will be held under the patronage of Russian President Vladimir Putin, will open in the town of Zhukovsky near Moscow. The head of the Russian state spoke highly of MAKS. The president said that during its existence, the salon “has turned into a good, good-quality international platform, where manufacturers can show what they have done, and aerospace technology lovers can look at the achievements of the global aviation industry and the space industry.”


As Rostec CEO Sergey Chemezov said, this year the state corporation plans to show more than 100 exhibits. Some of them will be represented by enterprises of OJSC Shvabe, of which Rostec is a key shareholder.

The decision to form Shvabe Holding, the leader of the optical-electronic sector of the domestic economy, was taken in 2008 in accordance with the intention of the Russian government to implement the policy of reforming the defense industry complex of Russia. The main goal of uniting the leading domestic optical enterprises was to increase the competitiveness of the Russian optical-electronic industry in the global markets of military and civilian products. In 2009, real events were carried out to unite enterprises into a single whole.

The holding received its name in honor of the founder of the Ural Optical-Mechanical Plant, the German Theodor Schwabe, who came from Switzerland to Russia, who had opened a sales and production of geodetic instruments, optical accessories and medical instruments in 1837 in Moscow. As Shvabe CEO Sergey Maxin explained, this name was chosen by the holding to show the long and rich history of the company and announce the traditionally high quality of its products. “Rebranding was necessary so that our holding could compete on equal terms with leading global companies for which the brand is one of the key assets, the most important competitive advantage, no less important than the production base,” he stressed. The director also noted that the Company has “a good pace of development, a lot of people wanting to join the holding company.” “We expect that we will expand, and are preparing for this,” said Maxin.

The structure of "Shvabe", which until October 2012, was called "Scientific and Production Concern" Optical Systems and Technologies ", includes 37 organizations, including research institutes, design offices, research and production and production associations. They are located in Moscow and the Moscow region, in St. Petersburg, Vologda, Kazan, Yekaterinburg and Novosibirsk. The headquarters is in Yekaterinburg.

The holding's enterprises employ about 20 thousand people, including 4,8 thousand scientific workers, 478 of whom have degrees of doctors and candidates of science. The average age of employees is approximately 49,6. In 2012, the management of the holding company conducted planned work to reduce the managerial staff and increase the number of technical specialists. The management team was reduced by 16%, and the number of engineers and technicians increased by 33%. At the same time, the number of workers remained unchanged, but labor productivity increased significantly.

In the 2012 year, as Sergey Maxin recently told representatives of the Russian media, the holding's net profit amounted to 934 mln. Rubles, which is 13% more than in the previous one. According to the director, in 2013, it is planned to bring the net profit to 1,051 billion rubles. Last year, sales amounted to 26 billion, that is, it grew by 27% compared to 2011 year. In 2013, it is planned to increase this figure by another 21%. The expected profit should be 31,5 billion rubles.

The most important event in the history of Shvabe, according to its head, was the completion last year of the incorporation of all federal state unitary enterprises in the holding. Now, having become joint-stock companies, these enterprises have been able to enter the stock markets and the borrowing markets, including foreign ones. In addition, the key shareholder of Rostec holding decided to transfer the shares of its affiliated organizations to the ownership of Shvabe.

In 2017, the holding intends to enter the IPO, which, as noted by Sergey Chemezov, will attract additional investments. The proceeds from the sale of shares are planned to be spent on upgrading the holding's enterprises, R & D and developing new products.

Shvabe develops and manufactures high-tech optical-electronic systems and complexes for military and civil purposes. According to the head of Rostec, the corporation headed by him "attaches paramount importance to the development of the optical-electronic direction." “No domestic aircraft or helicopter can do without the products of the enterprises of the Shvabe holding company. It is installed and successfully operated on space, land and marine technology, is in great demand among builders, hunters, traffic organizers, doctors and scientists both in Russia and abroad, ”Chemezov said.

The range of products developed and manufactured at the holding's enterprises includes about 6 thousand items. Last year almost 75% of Shvabe products were intended for all types and types of troops of the Russian Armed Forces, as well as for the FSB and the Ministry of Internal Affairs. The rest of the products were delivered to the civilian sector. In the future, it is planned to change this ratio and increase the range of civilian products, the volume of which should increase to 50%.

By orders of law enforcement agencies, research and production units develop and produce optoelectronic systems and complexes, and many other military products. They supply troops with sighting systems for combat aviationmissile forces, navy and intelligence. Products of this purpose are used in the Ministry of Internal Affairs, the FSB and other law enforcement agencies.

The civil and military products of the holding find real demand in more than 80 countries of the world. But the main importers of its military component are still China and India. In 2012, the company's total order book for the next five years exceeded 81 billion rubles.

In the newly developed Development Strategy of the holding up to 2020, it is indicated that its leadership attaches primary importance to the creation of new technologies for military and civilian purposes. At the present stage, the holding is developing and introducing 79 unique technologies, among them such as the optical-electronic integrated system for the latest generation aircraft, mobile surveillance-tracking all-high-level observation stations of man-made space objects; fluorosilicate fibers; Yttrium-lithium double fluoride laser crystals with a diameter of up to 15 mm and a length of up to 150 mm with rare-earth elements; ion exchangeable glass for gradient optics; devices adaptive for work with the helmet-mounted target designation and indication system. The holding's enterprises are also developing a new generation of optical-electronic infrared range systems for information and telecommunication systems for global control of the territory of the Russian Federation, the water area of ​​the World Ocean and outer space. Optical-electronic systems are being developed for anti-aircraft missile systems, optical sighting fire control systems and reconnaissance tools using new optical glass production technologies, aerospace optical-electronic and optical photographic means of sensing and monitoring the earth's surface. Among recent developments is a complex of laser means for protecting ships from pirates, an unmanned hyperspectral complex for conducting remote aerial reconnaissance in the near zone of the adjacent territory.

In 2012, Shvabe enterprises spent 3,7 billion rubles on R & D. Before 2020, it is planned to increase this figure several times. In general, allocations for the innovative development of the holding in 2020 are planned to be increased to 87 billion.

Currently, the holding has created 10 centers of competence in the most important areas of activity, including such areas as laser systems and complexes, ECO for military and civil aviation, for naval fleet and air defense, for armored vehicles, for small arms weapons, melee weapons, artillery, intelligence and a number of others. In the near future, four more such centers are planned.

The management of the holding plans to carry out a large-scale diversification of production and to double the share of civilian products and revenues from its sales. For example, sales of medical equipment by 2020 should increase by 34 by a year, and optical materials by nine times.

In the upcoming aerospace show, most Shvabe holding enterprises will participate. For the first time, they will present their products and technologies as a whole, and not as separate expositions, although on one stand, as it has been until now. Stand "Shvabe" will include space and aviation components. According to representatives of the holding, some enterprises will not exhibit real exhibits, but only information about themselves and their achievements, which visitors will be able to see through interactive monitors.

In addition, promising equipment and products for civilian use can be seen at the Shvabe stand. UOMZ will show the 730, 820 and СОН-М Optical Observation Systems. The Lytkarinsky optical glass plant will demonstrate space mirrors for satellites with the “Opal” and “Karat” lightweight structures, a meteorological visibility meter, and a cloud height detector ROV-5. Krasnogorsk plant them. S.A. Zvereva will present the GEOTON-L1 multizone remote sensing imaging equipment for Resurs-P, which is currently operating in space.

The holding's management attaches great importance to the upcoming salon, since it will allow new domestic technologies, such as photodetectors and thermal imagers and a number of other recent technological advances, to be demonstrated to potential domestic and, above all, foreign partners.