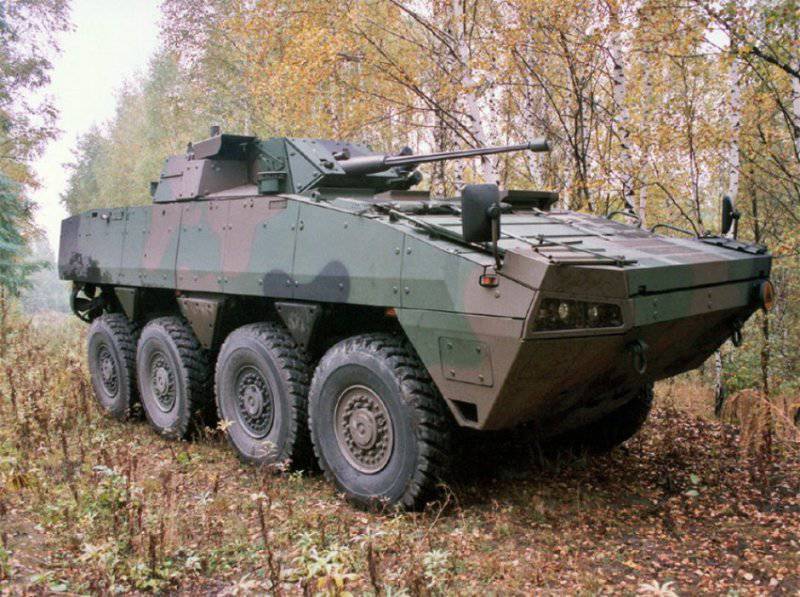 The tender for the wheeled armored personnel carrier caused a lot of controversy. Before analyzing their feasibility or selection requirements, you should pay attention to the fact that wheeled armored personnel carriers can be divided into several classes in terms of the level of protection that it provides for a vehicle, and therefore, each class has a different weight of its own base.

The ground forces ordered a floating 8 × 8 vehicle with a mass of approx. 20 t. These are typical requirements placed on a vehicle of this class - other members of this category are Steyr Pandur or MOWAG Piranha / LMV / Stryker. It is worth emphasizing that there are also vehicles on the market that offer a higher level of protection, but by increasing the mass (it is approaching 30 t), which makes the ability to swim and air transportability by medium aircraft impossible. The most popular vehicles of this type are German GTK Boxer as well as French VBCI. 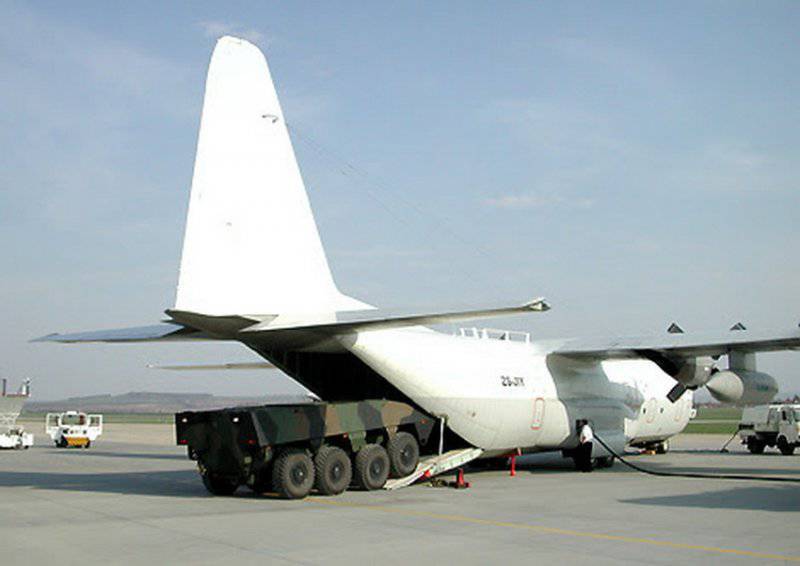 The C-130 air transport requirement is most likely inspired by the requirements of the American BTR Striker program. Practice has shown that this requirement was divorced from reality - the Hercules aircraft with an armored personnel carrier on board is on the verge of payload. For a start, you can take just a supply of fuel from a transport worker, which significantly reduces the range of the aircraft, so much so that the operation of air transport can lose its meaning. In the case of Poland, this requirement seems even less important, having weighed on the fact that at the time of the beginning of the tender Poland did not have Hercules aircraft, and it was obvious that it would not have more of them.

Now the air vehicles themselves in the “national” version must be adapted to the air transport by the C-130 aircraft (such requirements could be put before this version), as well as other versions with the appropriate weight and dimensions capable of air transport by the C-130 aircraft eg. WEM version machines. Obviously, all Wolverines can be transported by such planes as IL - 76, C - 17 or AN - 124.

The requirement for the ability to overcome water obstacles is part of the military tactics of the Warsaw Pact, where most armored vehicles have such ability. In the Western states such a requirement is not made, or it is not paid any principal attention. Taking into account that brigades equipped with Wolverines must be lighter and have a great tactical mobility, the formulation of such a requirement may be a matter of principle. Most likely, the future BMP (receiver of the floating BWP - 1) will not have such an ability (for example, BWP - 2000, which was developed at one time), so leaving such an opportunity in the case of a wheeled armored personnel carrier may look necessary.

Possibilities such as "buoyancy" are needed only for groups that use this machine in a wide range of activities. 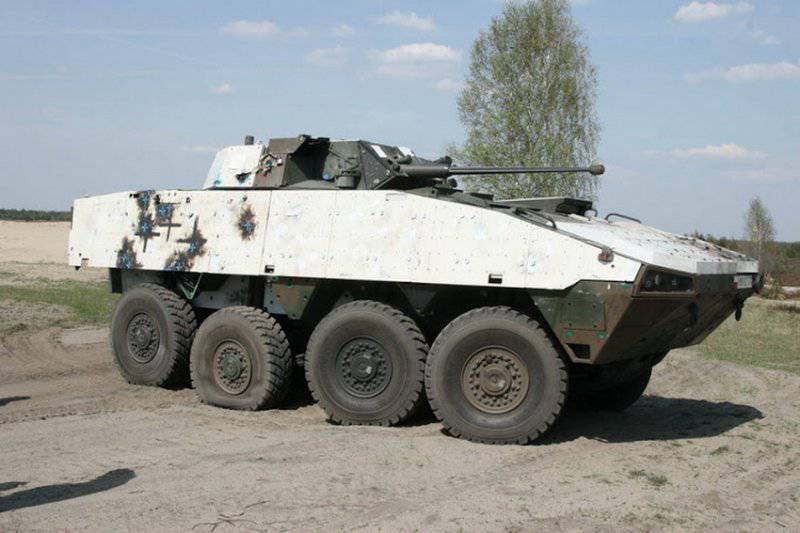 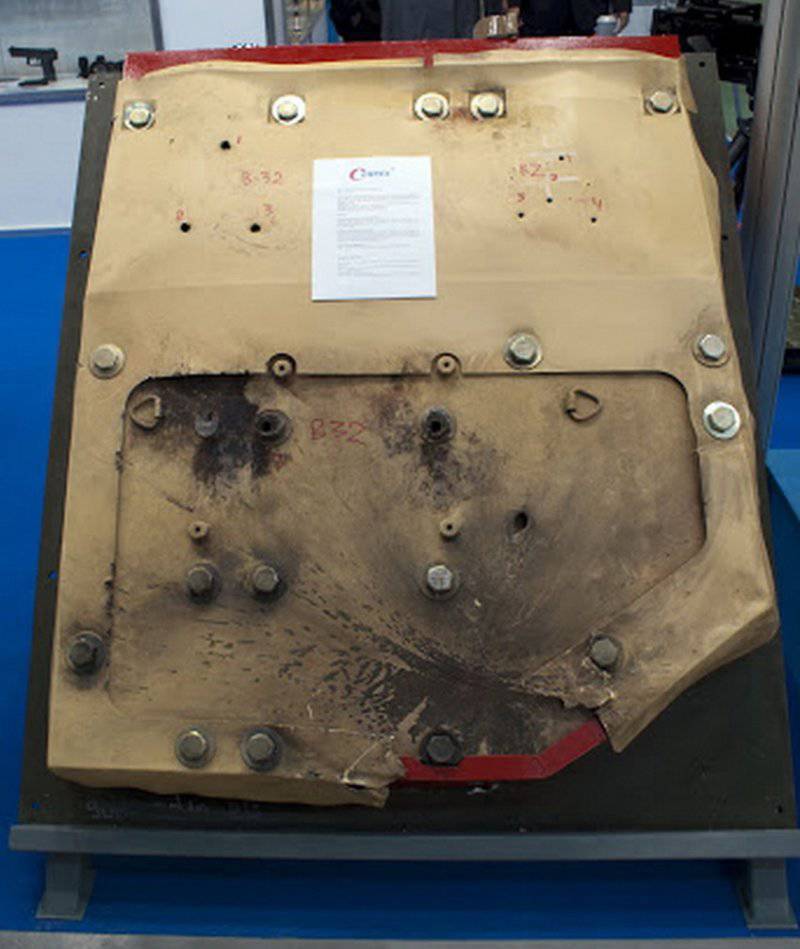 Wolverine after a positively completed test-shelling of 14,5-mm KPVT; additional armor plate (used in the "Afghan Machines") after the detonation of PG grenades - 7В (the most popular type of grenades for RPG-7).

The basic version of the vehicle has 60 ballistic protection of the tower at 4, and the rest at 3 according to STANAG 4569 against artillery pieces, bullets, and anti-personnel landmines at 3 and anti-mine mines at 3a.

The vehicle in the "Afghan (with additional booking) version" has a ballistic protection enhanced to the full level of 4 (in all directions), the front armor which in the main version provides the level of protection 4 + has been enhanced. In the "vital zone" of the vehicle, it provides protection against RPG-7 grenade launchers.

The level of protection of the main Wolverine before firing 14,5-mm bullets from the front and 7,62-mm from the side directions is typical and does not differ from the protection used by the US Army on striker vehicles or other similar vehicles. It is worth emphasizing that from the beginning it was planned to equip Wolverine with additional reservations, increasing the level of protection (however, it was not part of the initial contract, and had to be purchased separately).

The question of strengthening the level of Wolverine reservation, gained relevance, before the departure of the Polish Military Contingent to Afghanistan, many mass media presented Wolverine as an armored personnel carrier dangerous for the crew, and also unsuitable for use in combat conditions. These accusations were unfounded, and even harmful. An alternative for KTO Wolverine was the use of armored HMMWV vehicles and the BRDM - 2 "Jackal". Both of these vehicles have a lower level of ballistic protection than Wolverine (even compared to the main version), but more importantly, these vehicles practically do not provide protection against the greatest threat in Afghanistan - mine-trap explosions, while Wolverine protects against an explosion under wheelless mine weighing 6 kg TNT. The launched media campaign brought to the administration at the expense of the taxpayer to Afghanistan 10 vehicles BRDM - 2 "Shakal", which were never used, because BRDM-2 did not provide a sufficient level of protection (although some cars were covered with HESCO armor plates, which represented additional body protection element).

The need to send Wolverine to Afghanistan (as well as a seemingly aggressive media campaign) brought to the equipment an additional purchase reservation for Wolverine (the booking of the Israeli firm Rafael was purchased), as well as the purchase of several other additional equipment items specifically for the BTR missions in Afghanistan. 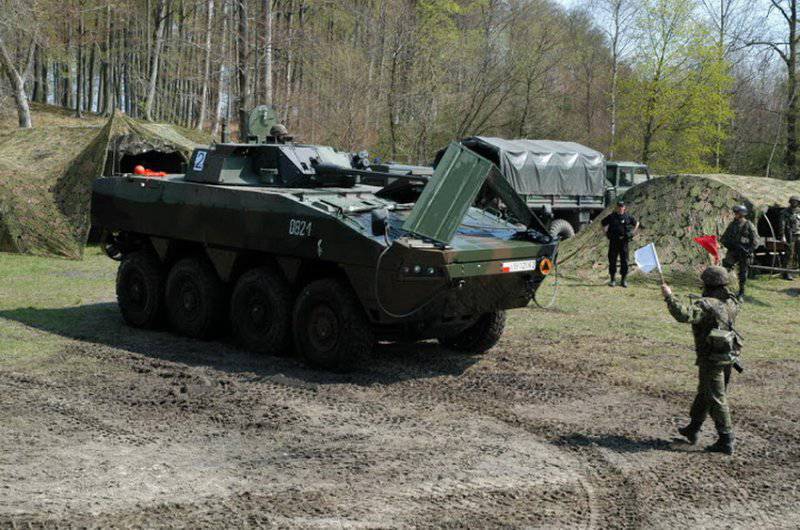 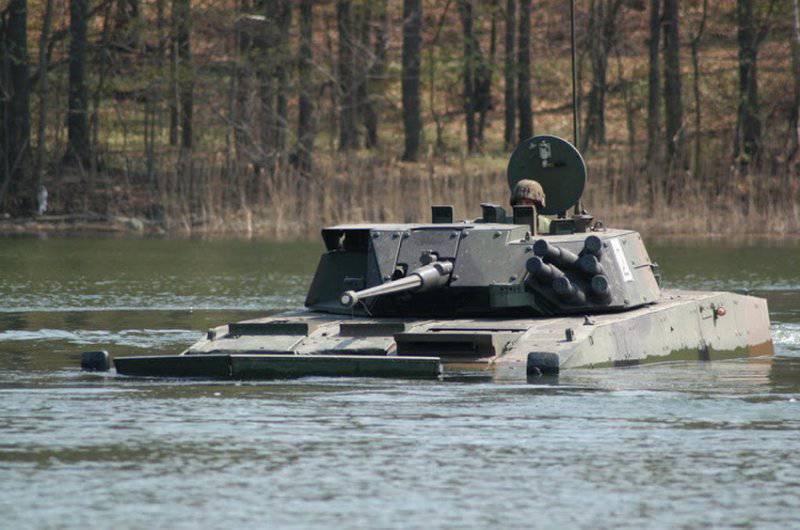 Wolverine during the raising of the wave deflector, as well as during the overcoming of water obstacles.

The circumstances of the departure of KTO to Afghanistan were not the only moment when the BTR became the target of an aggressive media campaign. A similar situation occurred before. 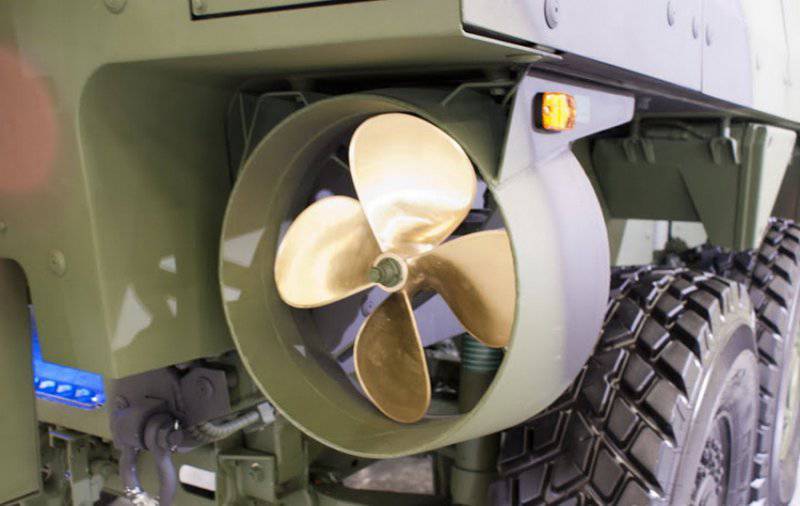 Propeller that provides movement through the water

The requirement for buoyancy is a stand-by dispute, and so the original version of all Wolverines are equipped with a wave deflector that is laid out manually with the help of a crew member, who had to leave the vehicle in order to do this. The shape of the hull has a rather interesting look - it resembled the bow of a boat. It was a decision that was approved with the requirements of the Polish user - however, the media used this fact for anti-propaganda (a lot of exaggeration) that it could be dangerous to raise the vehicle shield in different circumstances, emphasizing that the competitor (CTO "Lynx") has a breakwater, decomposition which is performed automatically. The manufacturer undertook, free of charge for the decision-making by the commission, to retrofit, as on new ones already delivered earlier, an automatic elevator drive. 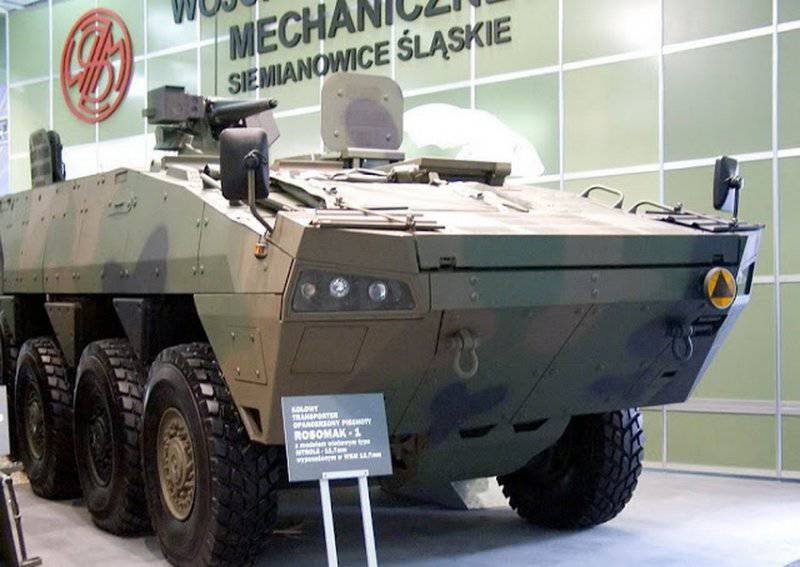 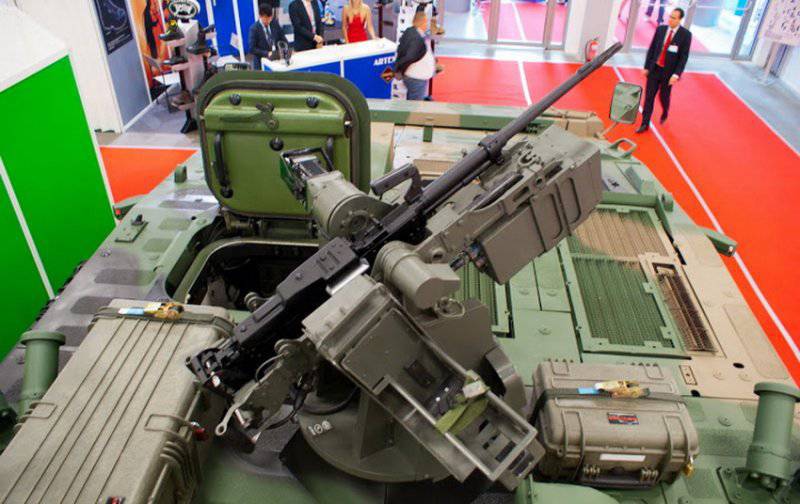 In accordance with the initial task of the 230 Wolverine (including the 135 Wolverine - 1 in the version of the infantry transporter) had to be equipped with remote-controlled weapons modules equipped with UKM machine guns - 2000 (7,62 mm) or WKM - B (12,7 mm).

The winner of the first tender, which ended on October 24 in 2005, was the offer of the Israeli Rafael - RCWS - 127 Mini Samson, but the contract was not signed, however, for unknown reasons. It was decided to repeat the last phase of the tender.

In February, 2006 was sent to the Treasury of MO to submit tenders with slightly modified requirements. The cheapest offer was offered by OBR SM (with the ZSMU module - 127), but two weeks later he withdrew his proposal, most likely the manufacturer was afraid that he would not be able to fulfill the contract (due to time periods), which would have ended up paying for him forfeit.

In early April, 2006 returned to talks with Rafael, but there were protests from the Italians from Mellar, to return to talks with all bidders.
The case involved the Commissioner of the Ministry of Defense. Anti-Corruption Procedures. Proposals were made by 11 May and this very day determined the winner - OTO Mellar (module Hitrole). The contract for 249 of the finished modules was signed by 31 on July 2006 (it was necessary to abandon the equipment requirements of the modules with machine guns of Polish production, the modules had to be armed with FN MAG and FN M2HB) however this contract was canceled given the signing of the contract with the manufacturer in on 60 days without compensation agreements.
In the first half of 2007, the idea was outweighed by the fact that specialized versions do not need remotely controlled modules that are so expensive and complicated in this case would be useful non-habitable towers, such as on Rosomak-S-ATGM (s) with Spike ATGM It showed an example sent by the APC, with the Polish military contingent (PVK) to Afghanistan and Chad.

How much does Wolverine cost?