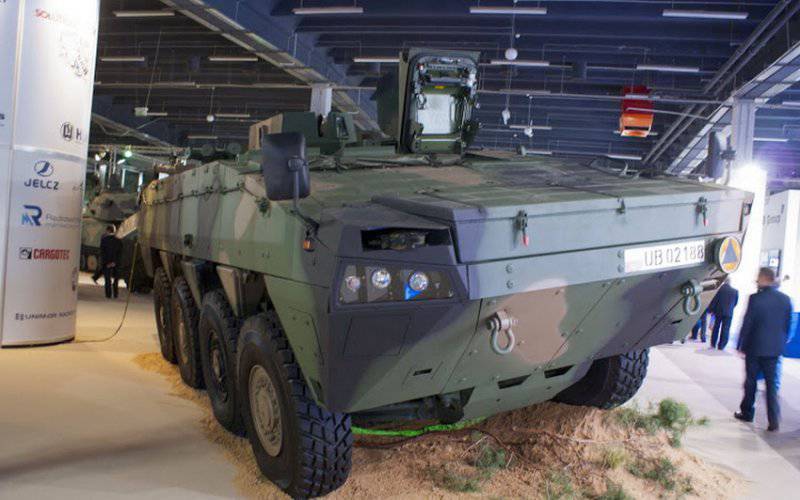 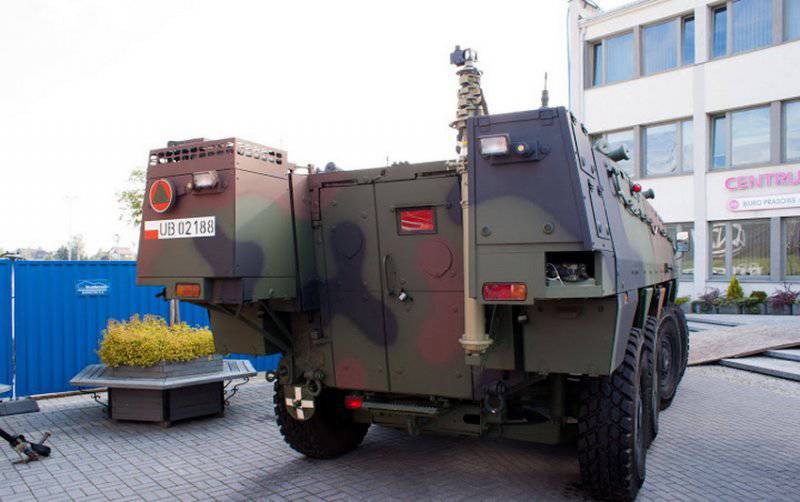 Commander machine control mortars "Cancer" - designed on the chassis of Wolverine in the basic version, equipped with an auxiliary generator, as well as a rotating machine gun for self-defense. 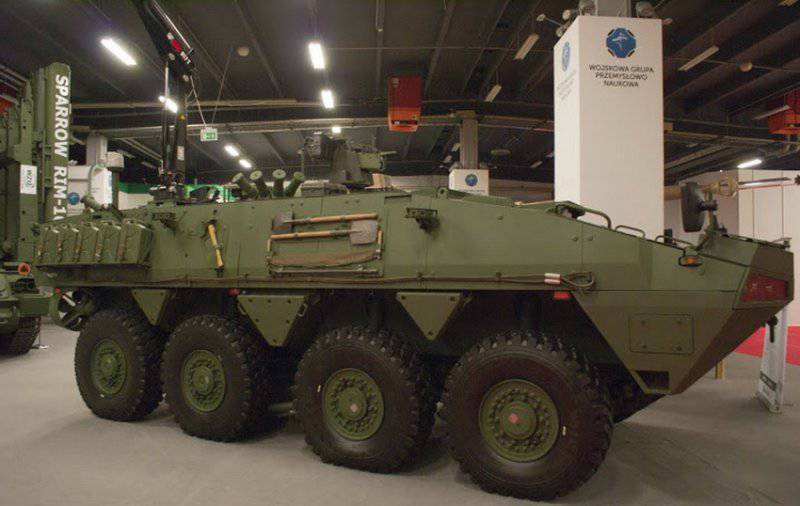 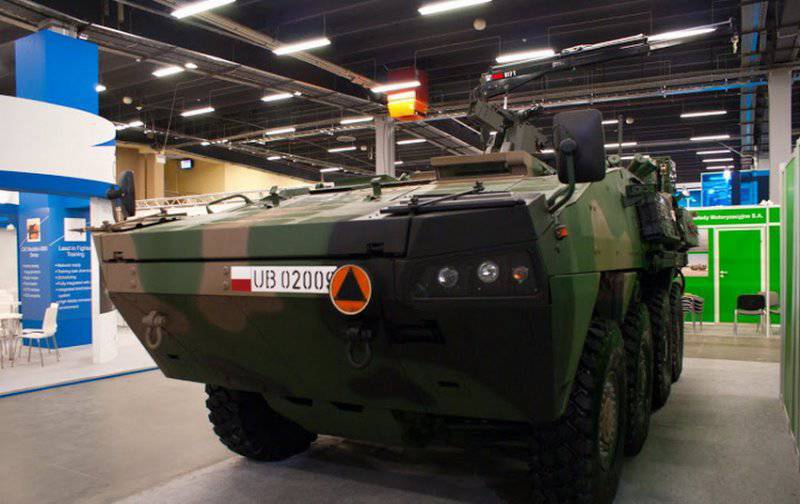 Rosomak - WRT - Technical reconnaissance vehicle equipped with a single-color crane. At the MSPO 2011, a prototype machine was first presented. Its task is to provide basic technical assistance to damaged and stopped vehicles (the implementation of more repairs, as well as evacuation will be handled by other vehicles).

The equipment includes: Hiab boom (crane) with a tonnage 1, diagnostic equipment and spare parts for Wolverine, rescue equipment (pneumatic jack), emergency generator (one internal, second remote), basic set of tools and spare parts for mechanical and electrical repairs. The designers did not forget to also provide working conditions - a large tent is included in the vehicle’s equipment, as well as artificial lighting, together with tripods, which allow to work at night. 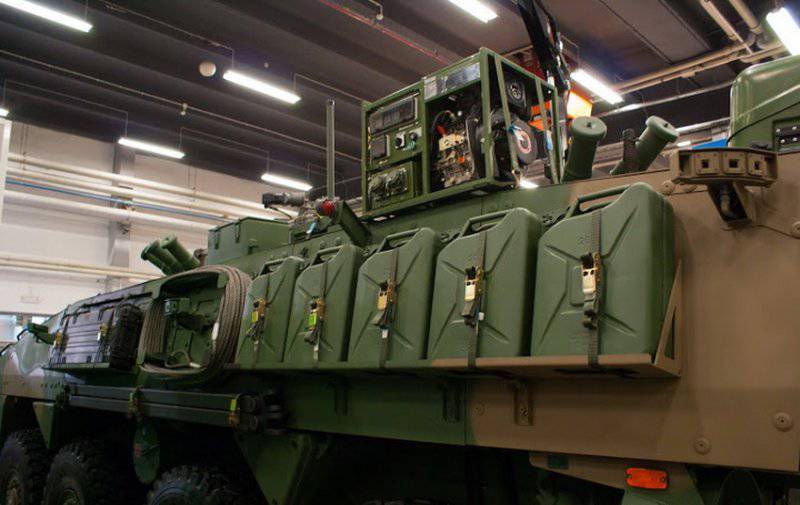 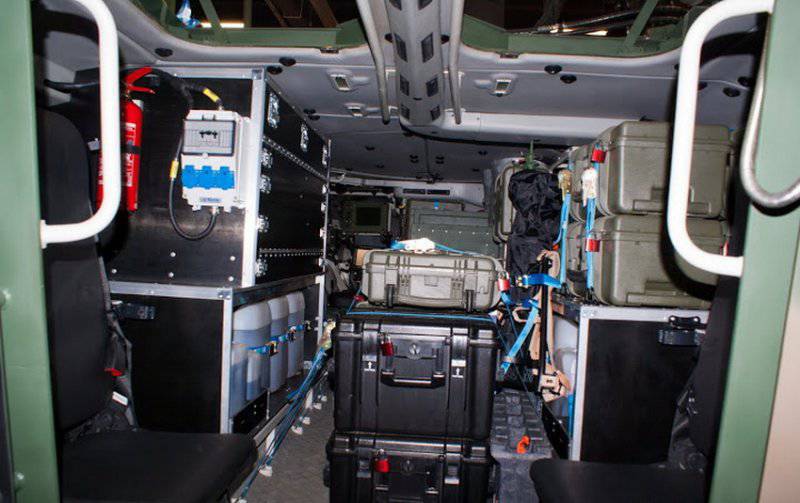 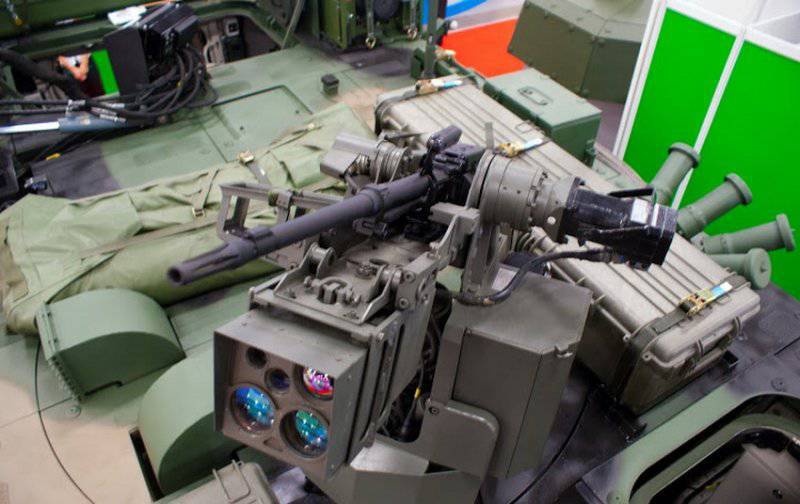 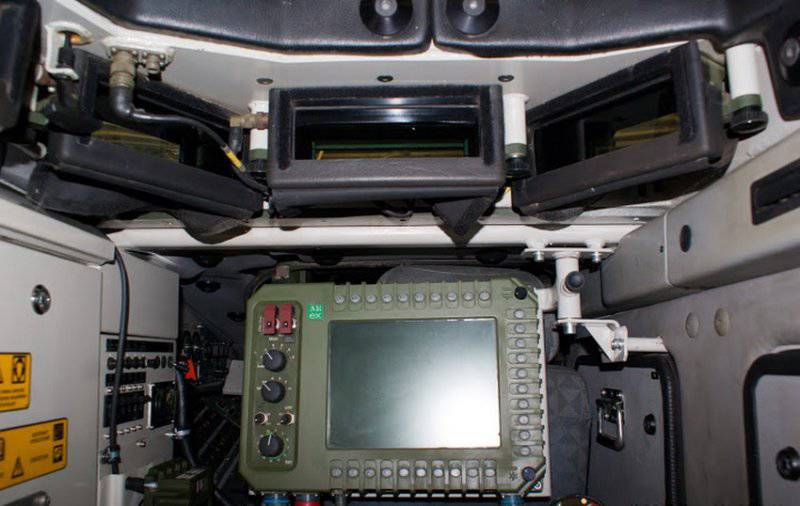 For self-defense, a remote-controlled Kobuz rifle unit with a 7,62 - mm UKM - 2000C machine gun should be used. To monitor the environment there is a day camera and a thermal imager. The combat module is controlled by the commander, who sits behind the driver. The commander-operator of weapons, in addition to the day channel in the module, has at its disposal a set of periscopes, which to a large extent expand its visibility. The complement of combat equipment is the SPP - 1 Obra - 3 system with a set of launchers for aerosol grenades.
The machine is an element of a wider concept of technical support vehicles in the interests of units armed with Wolverine.
In 2008, MO has planned to purchase 25 vehicles of this version. 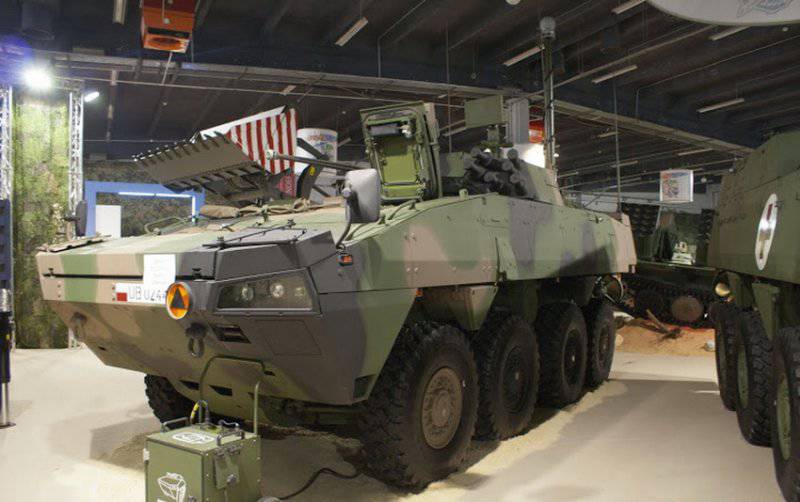 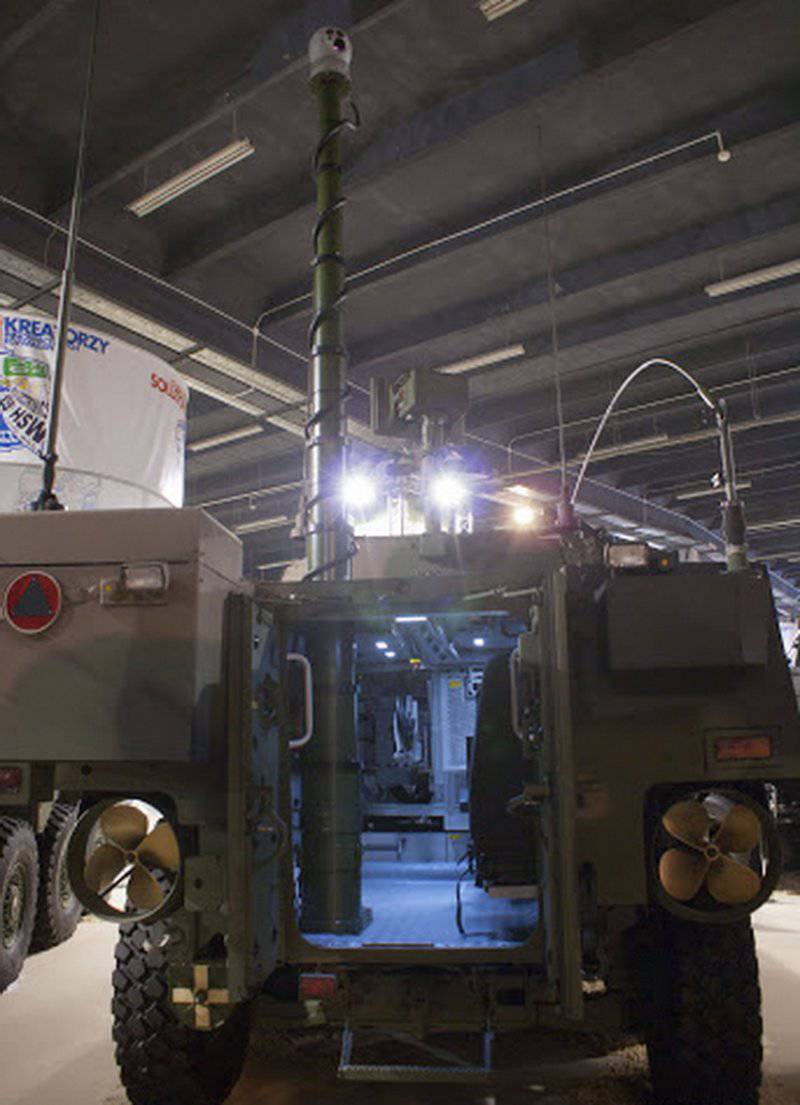 Rosomak - R1 и Rosomak - R2 - Intelligence vehicles were developed on the basis of the combat version with the 30-mm cannon, at the beginning it was planned to use the chassis shortened on the 60 cm for this purpose, with the 6 × 6 wheel formula. Later left this idea. At the MSPO 2012, a pilot version of the intelligence CTO was demonstrated. The vehicle is based on a floating variant (this is one of the requirements of MO). Additional equipment is located in the detachment of the landing force and on the tower and has no effect on the combat capabilities of the conveyor. The troop compartment of the reconnaissance vehicle was completely refitted. It has space for two operators and special equipment, including an 4-meter telescopic mast. The FLIR Systems observation block with a camera, a thermal imager and a laser rangefinder is placed on its top, which allows reconnaissance to a distance of 20 km.

The second key element of the equipment is the Turkish close-range radar Aselsan ACAR Ground Surveillan. Radar can detect a person in motion at a distance of 12 km, and columns of vehicles to 40 km. The radar is placed on a small mast at the back of the tower. The complement of reconnaissance systems is the acoustic fixation system of the shot as well as the navigation system. The standard equipment of the vehicle is supplemented with remote equipment, which includes portable surveillance systems and a directional microphone. 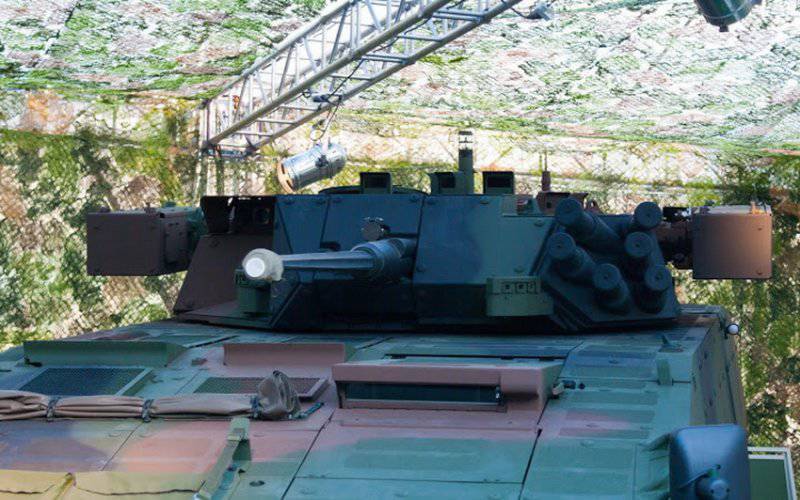 Rosomak - 2. Version with launchers ATGM Spike was planned in 2002 year, now not sure that this option will go into the series. At MSPO, the 2011 WZM presented a prototype BTR with a Hitfist turret - 30P, as well as Spike - LR launchers. At MSPO 2012 GTR Melara presented the placement of the ATGM, according to the requirements of the Polish military, where PUs were “inscribed” under the dimensions of the body, the weight of the launcher was also reduced. 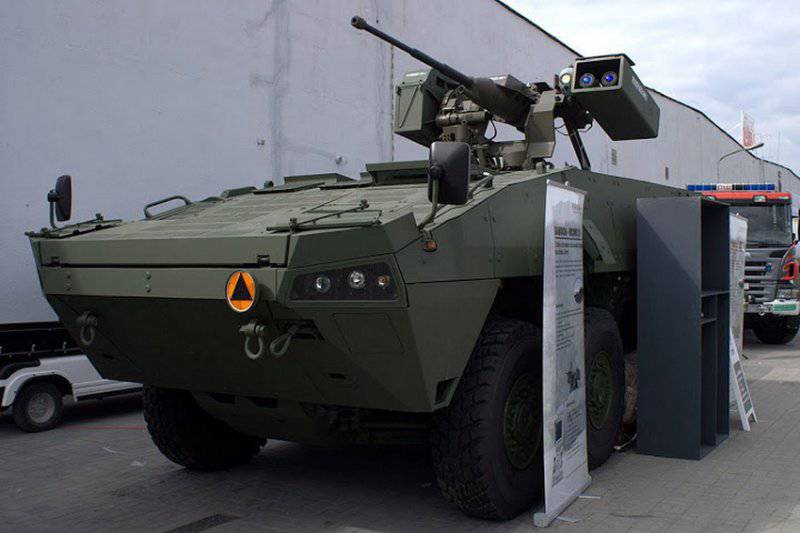 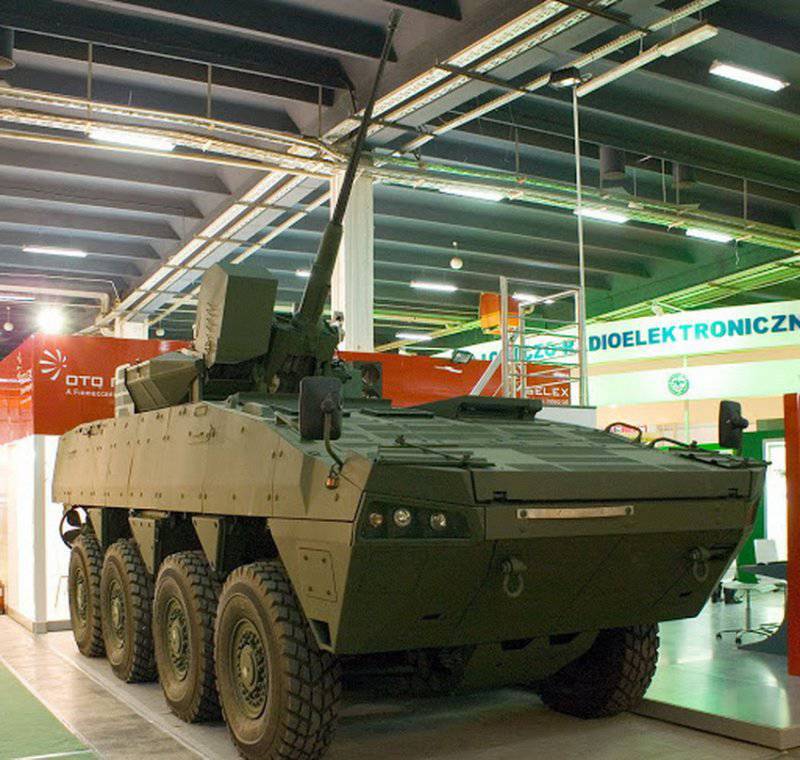 Rosomak - 1 125 units of KTO should have been equipped with so-called "small towers". Now this idea is left with the cancellation of the order for remotely controlled modules, however, plans to introduce additional 128 units (or more, as a result of an increase in the order for armored personnel carriers), as linear vehicles, made it possible to return the previous decision.

For these vehicles, as a result of additional purchases, “big towers” ​​with the 30-mm cannon and with the ATGM will be available. Most likely it will be an already uninhabited tower, possible options like Hitfist - 30 OWS, Samson Mk 2 or Lance (Spear). In any case, the Spike ATGM will be integrated into the tower. 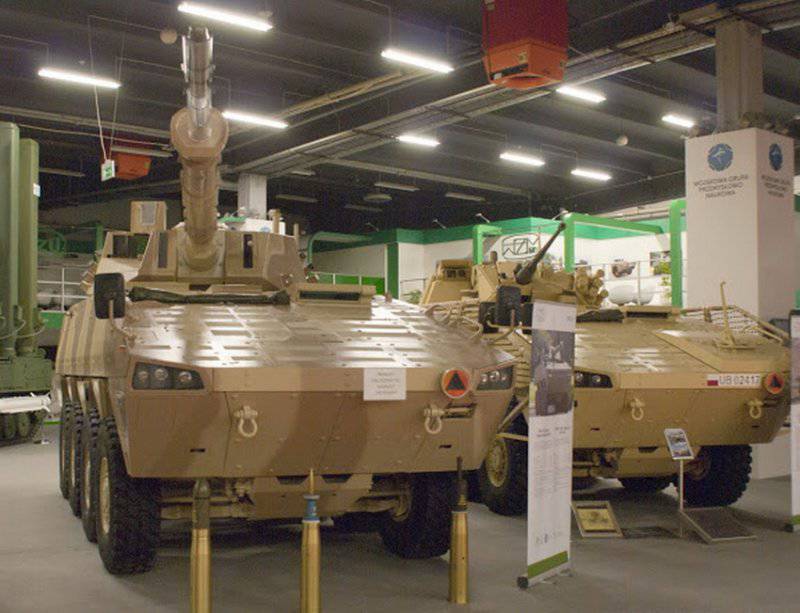 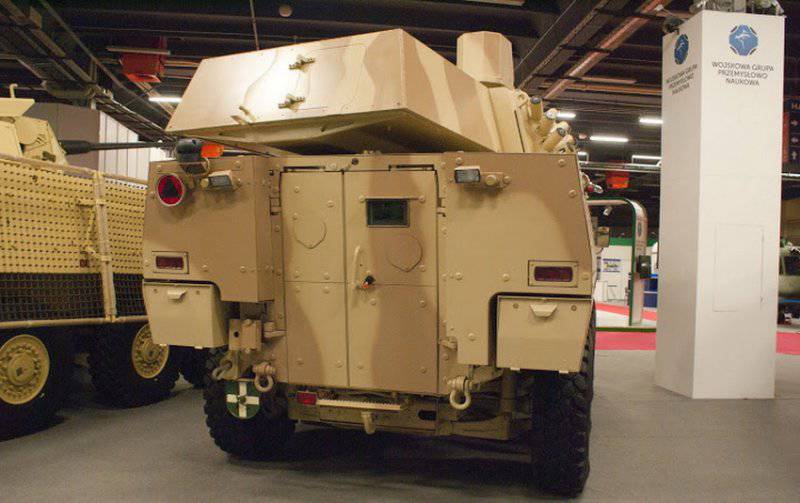 WWO Fire Support - Officially, such a car was not planned, but its concept may force a return to the revision of the program. Options that WWO Wolverine could have can be equipped with an 105mm cannon CT tower - CMI Defense product CV or a Hitfact GTR Melary tower, with two versions: with an 105-mm gun like an 120-mm gun. The advantage of the CT - CV tower is the fact that it was tested on the Patria AMV chassis (exactly on the XC - 359, AMOSa carrier). The prototype of Wolverine with the CT-CV tower was presented at MSPO 2011 and MSPO 2012 (in this second case it was dubbed “Wolf”).

The 105-mm caliber may be a good option for Western states that have stocks of such ammunition. Polish Ground Forces do not want the introduction of such unpromising tank caliber (to the unitary 120-mm used now, as well as 125mm separate-cartridge loading) ammunition.

Rosomak - WPT - A technical assistance vehicle equipped with an 4-ton crane. The car should be an addition to the WRT. If successful, the development, like the WRT, should be developed on the basis of the base “Wolverine”. The vehicle must be ready for heavier repairs: the crane is designed to raise the turret or engine. In 2008 MO planned to purchase 13 units of this version.

Rosomak - RSK - RCB reconnaissance vehicle (scheduled one in 2008 year, you must have 8 units).

Rosomak - WD - commander machine based on combat KTO (planned 18 units of this version).

Wolverine - car control air defense - Commander machine, for the commander of the battery of the brigade, two with battery and battery (Rega system) - you need 6 pieces. 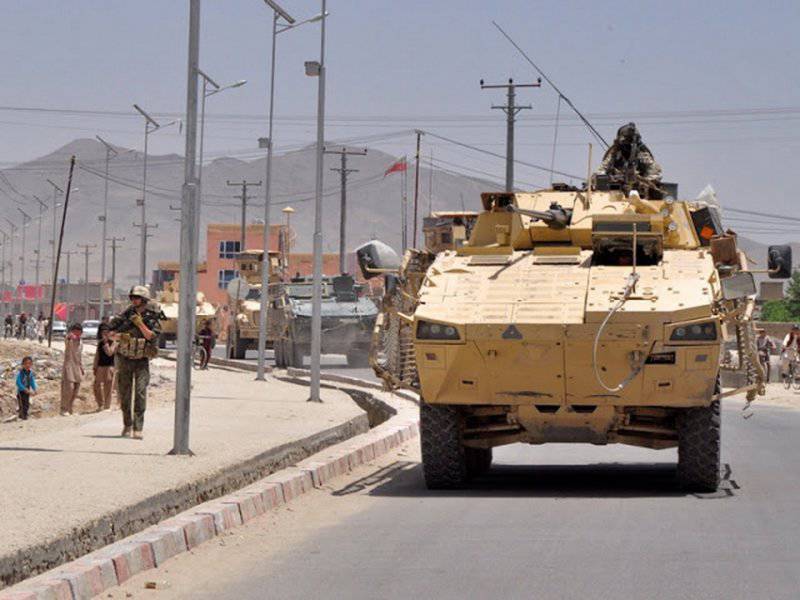 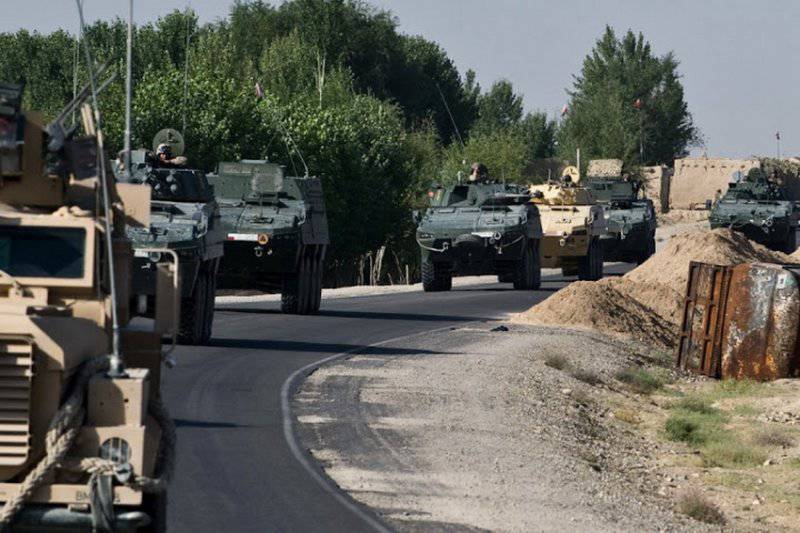 In 2007, 24 modified, combat Rosomak - M1 was sent to Afghanistan, part of the equipment of the Afghan package was installed directly in Afghanistan. An additional reservation was made several months later, during which time the cars were operated without it. Two of them were damaged, so serious that it was impossible to repair them on site and at the beginning of 2008 were replaced with new ones. At the same time, 4 Rosomak - WEM was also delivered in a transitional version, which replaced the medical unit “Lynx - MED”. At the turn of the 2008 / 09 of the year, vehicles arrived in Afghanistan in the version of the Rosomak armored personnel carrier - M3. The M1 and M3 vehicles used in Afghanistan are equipped with Rafael supplementary booking kits.

In the 2009 year, along with the increase in the number of contingents, the number of Wolverine also increased. As of September 2009, the total number in Afghanistan was the 91 machine, of which 75 vehicles were in active operation (the rest are either temporarily or permanently not in use). The use of Wolverine along with the Cougar MRAP removed the need to use, offering a significantly lower level of protection, the HMMWV, as well as other BTR, which also provide a lower level of protection. 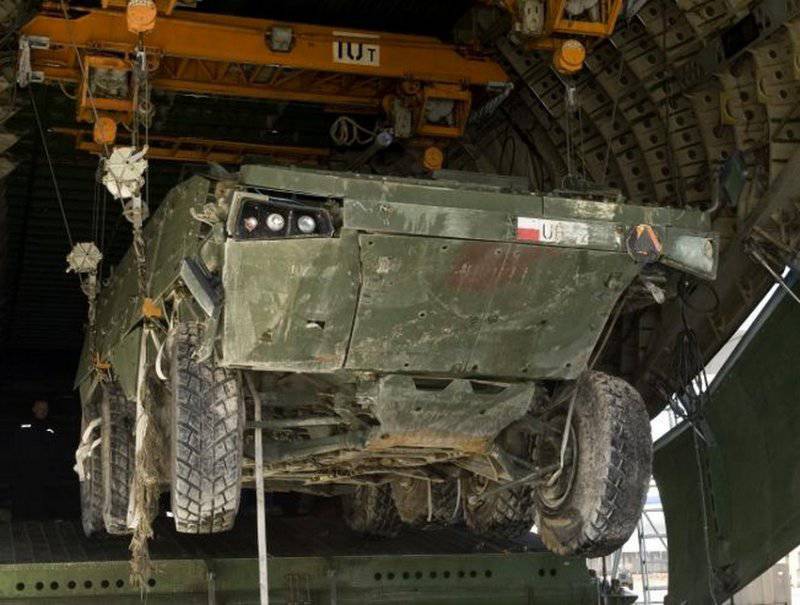 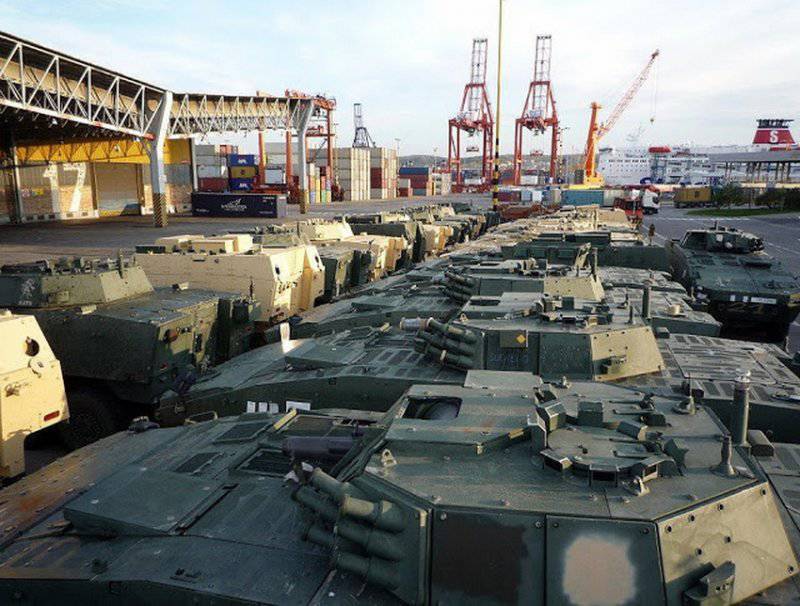 Damaged cars were usually transported by air (leased by An - 124), to the detriment of the withdrawal of the Wolverine contingent were transported by sea.

In the following years, damaged or destroyed cars were returned and replaced with "new" ones. In 2011, the first M1M version cars arrived in Afghanistan. Initially, they did not have RPGNet screens that were installed in the following months (it took several months, but the screens were eventually installed on most PVC cars). Rosomak - WEM in the version with modules were reequipped to the WEM - M version, while the contingent also received new MRAP, M - ATV cars (officially supplied from the USA by Provincial Reconstruction) 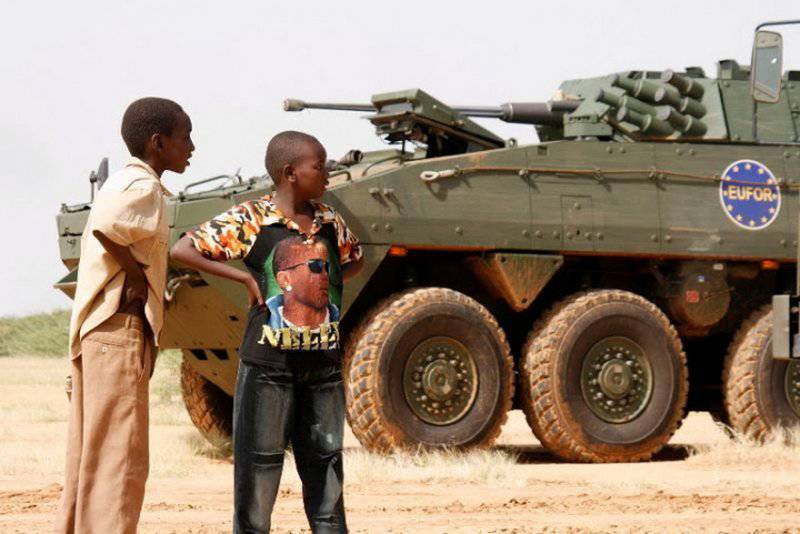 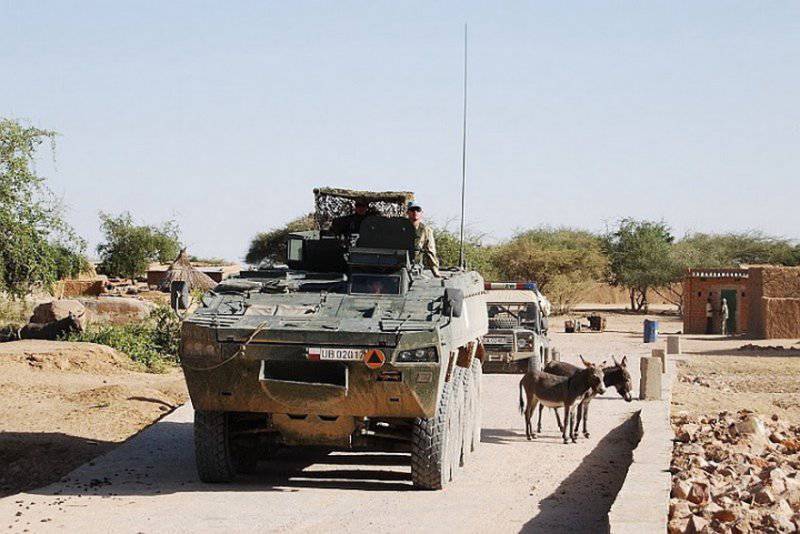 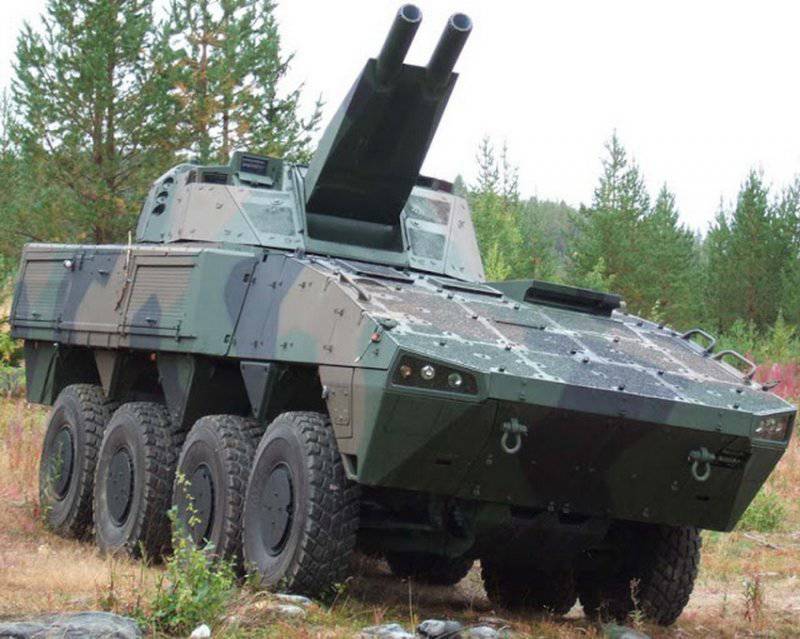 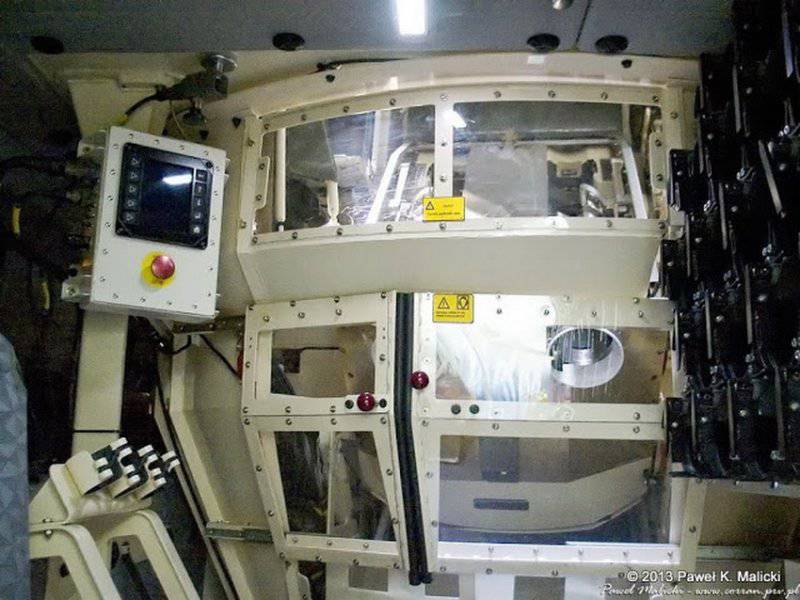 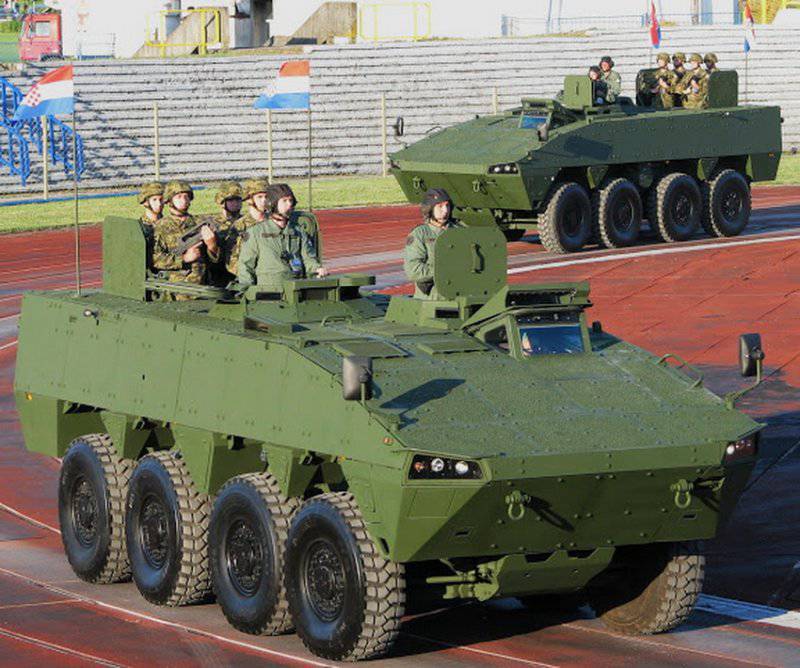 This country ordered an 2007 vehicle from 84, but 2008 expanded the order with 42. The first Croatian cars AMV were delivered in December 2008. Considering the beneficiary’s financial problems, the contract’s deadlines have not been determined, but now the deliveries of all 126 machines are running out (all CTOs had to be delivered before the end of 2012). Croatian AMVs are based on heavier, non-floating cars in the Finnish configuration. 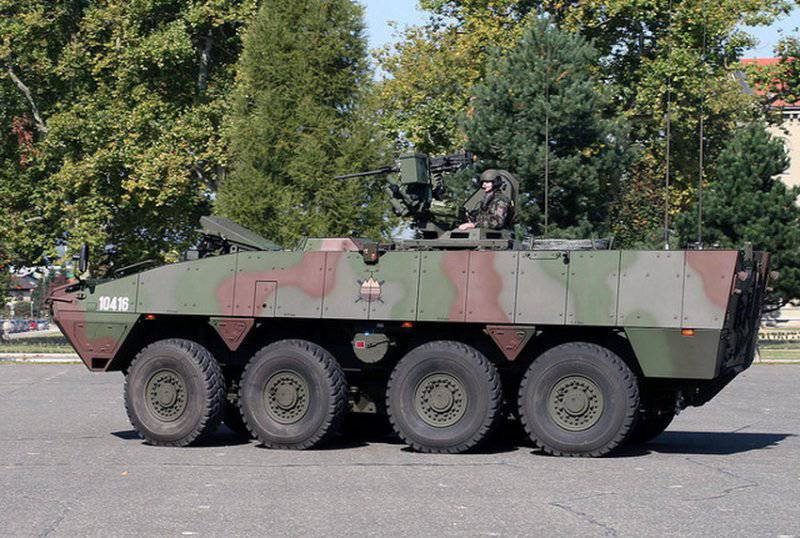 The local version of AMV under the designation Svarun ordered in the number of 135 copies, in different versions (including 12 mortars). Due to budget problems, as well as an incorrect ordering procedure, it was reduced to 30 machines. 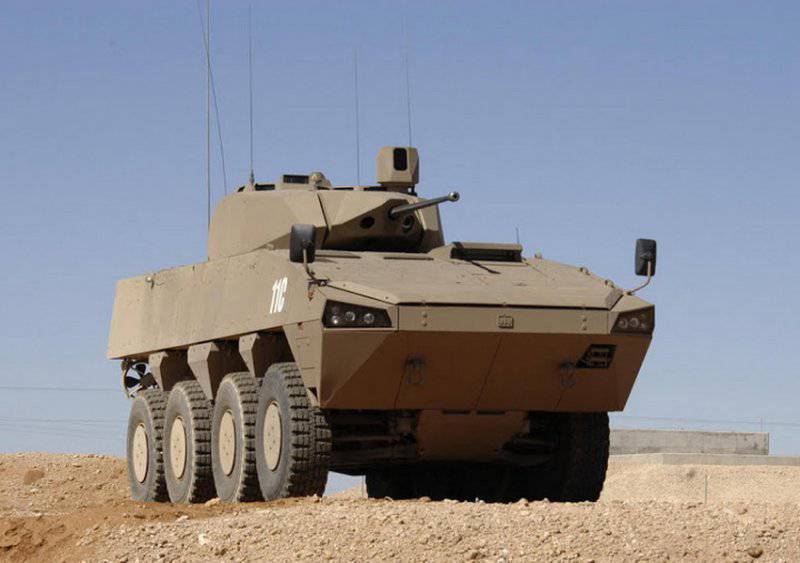 The African country ordered the entire 264 vehicle in five versions (wheeled BMP, ATGM (s), MOP car, self-propelled mortar, commander vehicle). The local designation of the car is Badger. The African version should provide protection in front of bezminochnymi mines with the equivalent of 10 kg TNT.

This country has ordered an 113 vehicle for picking a motorized brigade. The order was postponed because the initial tender had to be repeated. The winner was again the Patrii offer. Possible future increase in order. 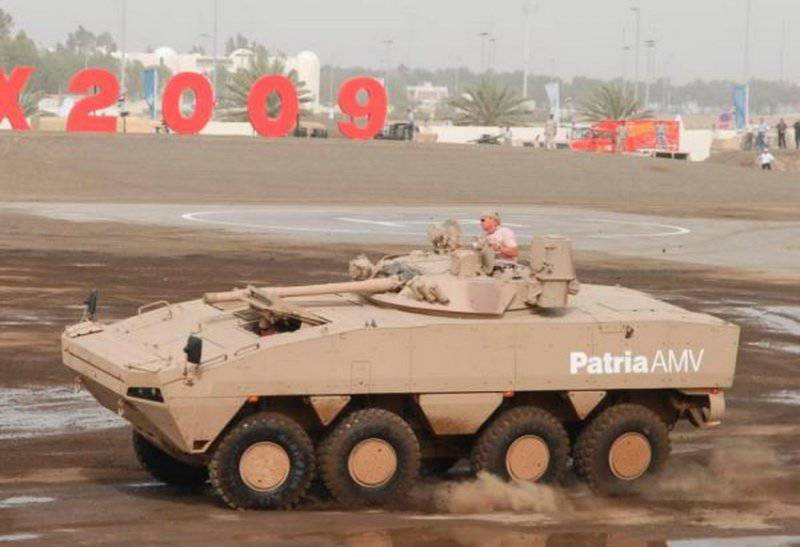 The UAE ordered 15 vehicles for the purpose of conducting tests (including NEMO self-propelled mortars, as well as an extended chassis on which the BMP-3 turret is installed). Order can have an impressive scale. 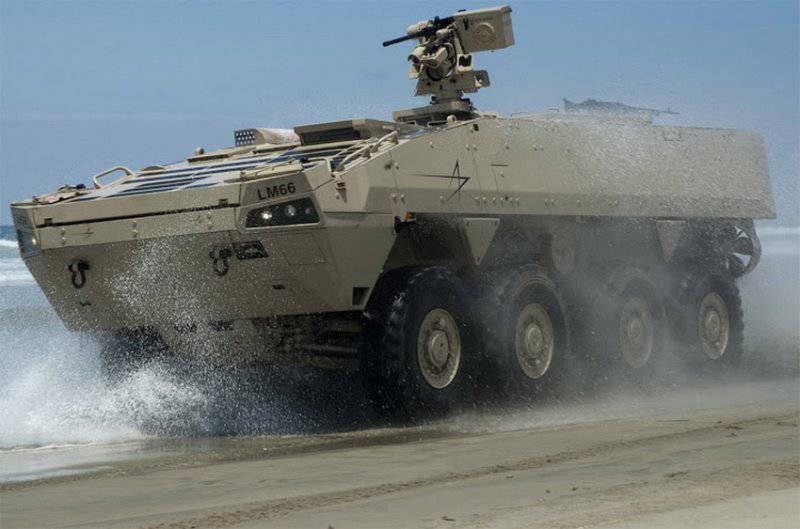 The Marine Corps is testing Havoc, the local floating version offered by Patri with Lockheed Martin. The car looks very similar to Wolverine - it distinguishes here with the presence of a ramp, another wave deflector, as well as an extended air intake to the engine. Havoc has a chance to win in the program of Marine Personnel Carrier - a new armored transporter, for USMC (US Marine Corps).
13.07.2013