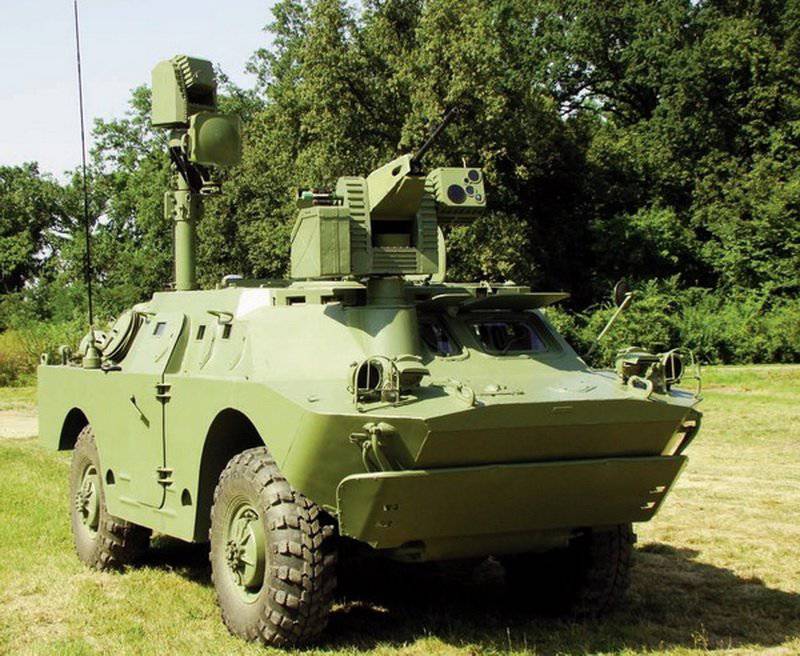 Now, the Ministry of Defense of Ukraine is thinking about modernizing the BRDM-2 and transferring it to the Airborne Forces instead of the UAZ. The vehicle must have a combat module instead of a turret and a troop compartment for an 5-6 person. This decision makes it possible to abandon the launch of the Dozorov-B, which many consider to be still a “raw” machine. 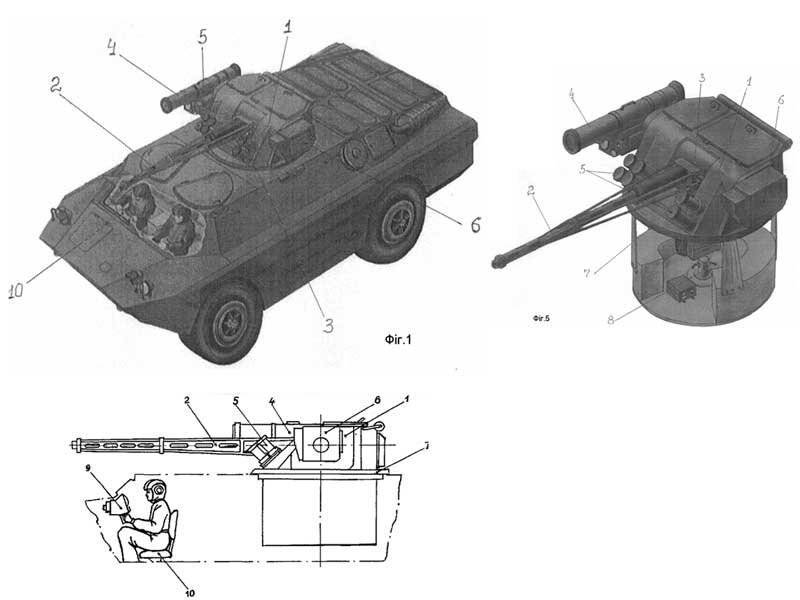 Option BRDM-2 with the module "Ingul"
However, this idea came to mind the Ukrainian military is not the first. The fact is that Serbia has taken the same path of modernization.
Serbia is a lot like Ukraine. A country with a high scientific base, glorious history The military industrial complex successfully develops armored vehicles and armament, but only a handful of them enter the army. Everything is mainly exported. The difficult economic situation in the country allows only to modernize the existing equipment.

"Wolf" ("Kurjak") - Modification BRDM-2
One of the projects of the company Jugoimport SDPR was the creation of an armored reconnaissance vehicle '' Wolf '' through the modernization of the BRDM-2. The originally shown prototype version had minor changes. One of the biggest changes was a new turret with a built-in 20-mm gun, it was also planned to install a module made of 12,7 mm, 7,62-mm machine guns and 30-mm automatic grenade launcher in its place. 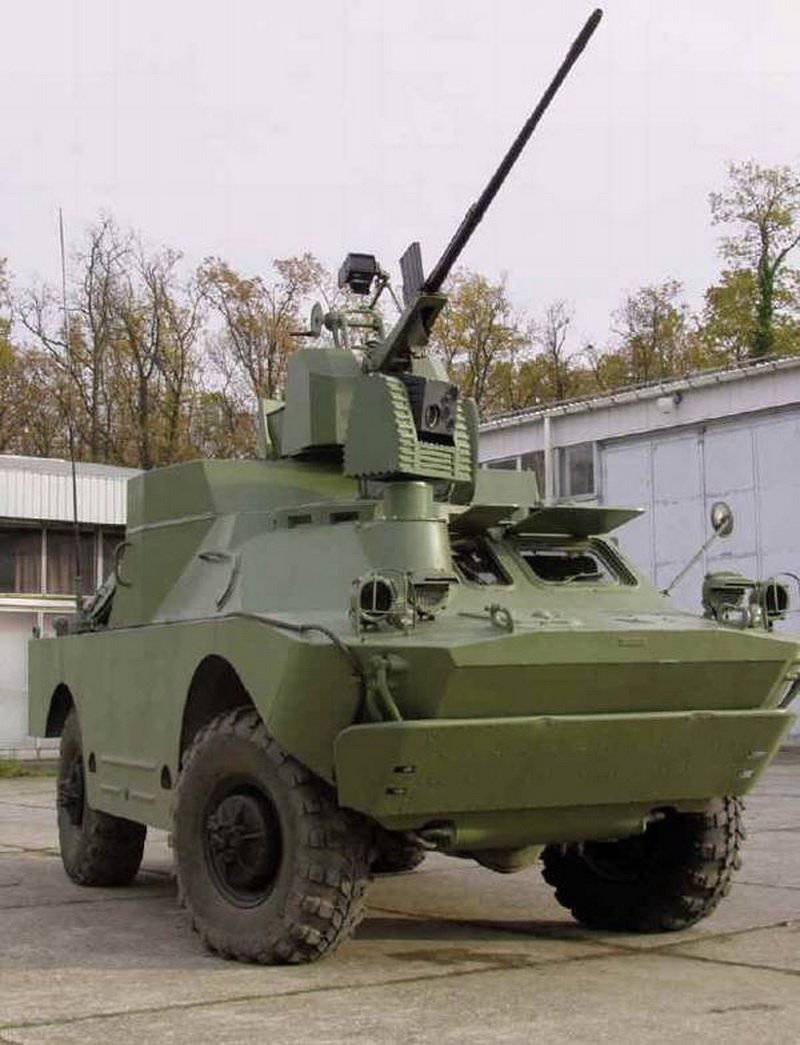 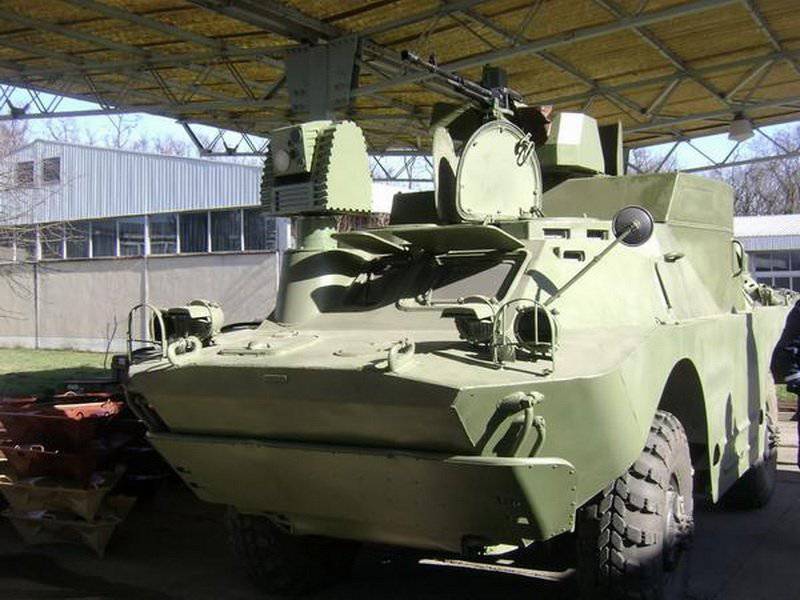 The combat compartment of the armored car was rebuilt, primarily by removing the central auxiliary wheels and wheel arches, so that in addition to the permanent crew members from 4, people can receive an infantry landing force - a reconnaissance detachment from 4 people. Special attention was paid to the increase in armor protection. As an option, installation of new, more modern diesel engines 128kW (174 hp), which significantly increased the dynamic characteristics of the machine. Vehicle speed increased to 110 km / h. The car retained the ability to move on water. There is a version where, due to an increase in the effective volume, they abandoned the water cannon, replacing it with two external propellers. You can also see the most notable changes, which includes multitouch surveillance devices - TOMS. In combination with the commander’s and GPS monitoring system, this device allows you to expand the visual observation of the battlefield during daylight hours, as well as the possibility of observing at night and in difficult meteorological conditions.

Such modifications may be primarily of interest to countries with BRDM-2 and modest defense budgets. For a relatively small amount of capital investment, you can get a more modern intelligence armored car or a rapid response vehicle.

However, some obvious drawbacks are noteworthy, primarily the Harrow cannon ammunition. The store supply, on 10 (!) Shells, moreover, it is located behind the defense of the tower, from the outside. Due to the small ammunition (total 100 shells in 10 stores), the gun is not able to duel with a sudden enemy. We tried to fix this flaw by installing a drum magazine on 60 projectiles. However, the drum is a good target. 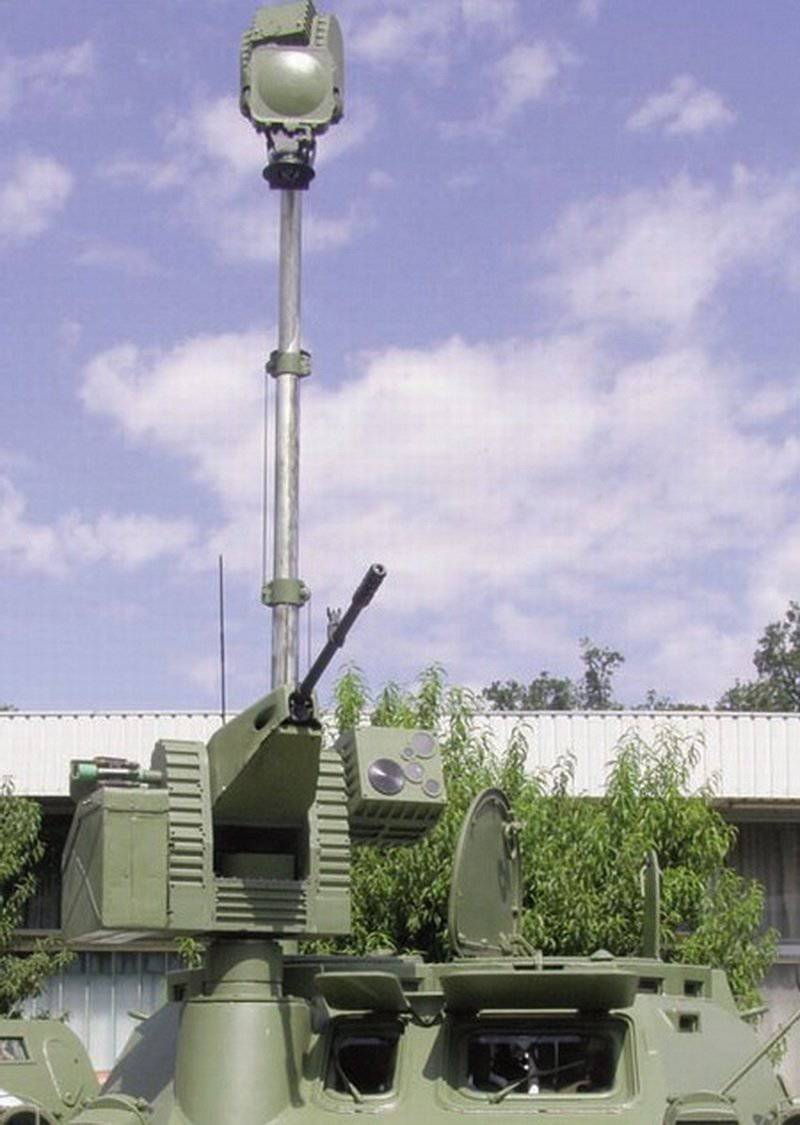 The tower with the 20-mm gun was removed and replaced by the installation of a telescopic mast on which the TOMS surveillance device was installed.

This allows her to raise it to a height of up to 4 m above the vehicle and thus increase the field of observation, with a total height of more than 6 meters, without exposing the BRM to detection.

Defensive weapons shifted to the cabinet on the right. Significant changes have affected the commander. He had integrated the remote control 12,7 mm machine gun and opto-electronic unit, which constitute a single sighting device, with a thermal imaging channel and a laser rangefinder. Ammo 200 ammo. 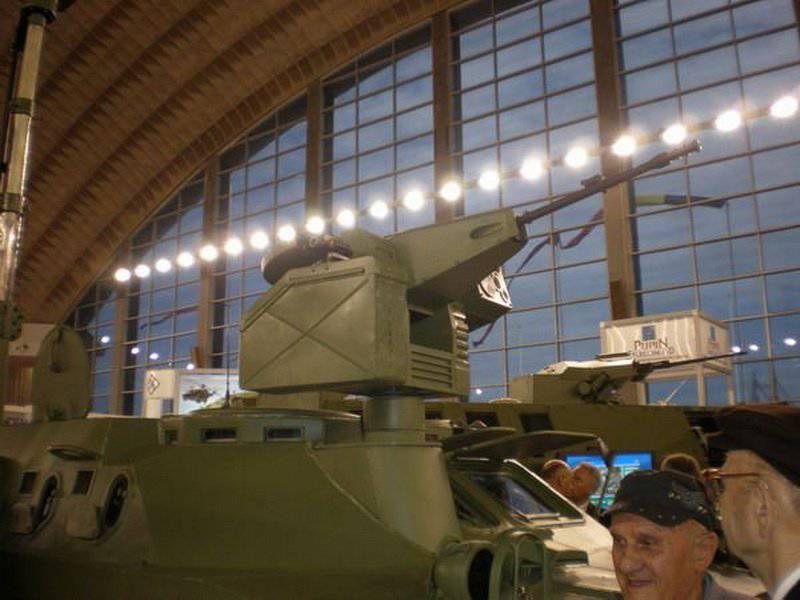 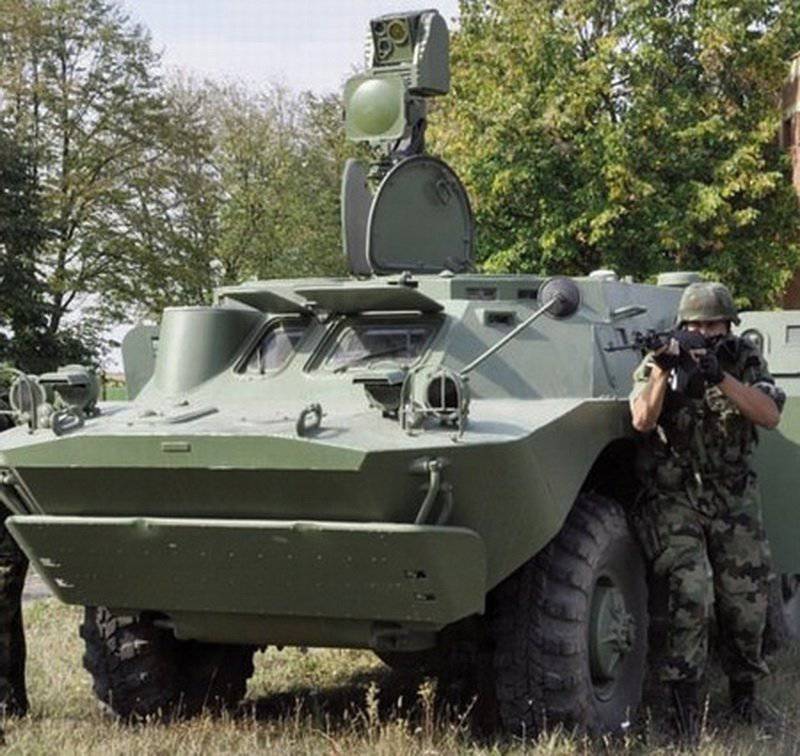 At the end of the year 2009. A PR-15 short-range radar reconnaissance station was installed on the mast.
Radar can detect, under favorable weather conditions:
Man - up to 7 km.
Car in motion on 15 km.
A subsonic air object at a distance of 20 km, at an altitude of 1000.
Recently, the question of installing anti-tank guided missiles with a separate sighting channel was considered.

TOMS - a complex of observation and measurement. 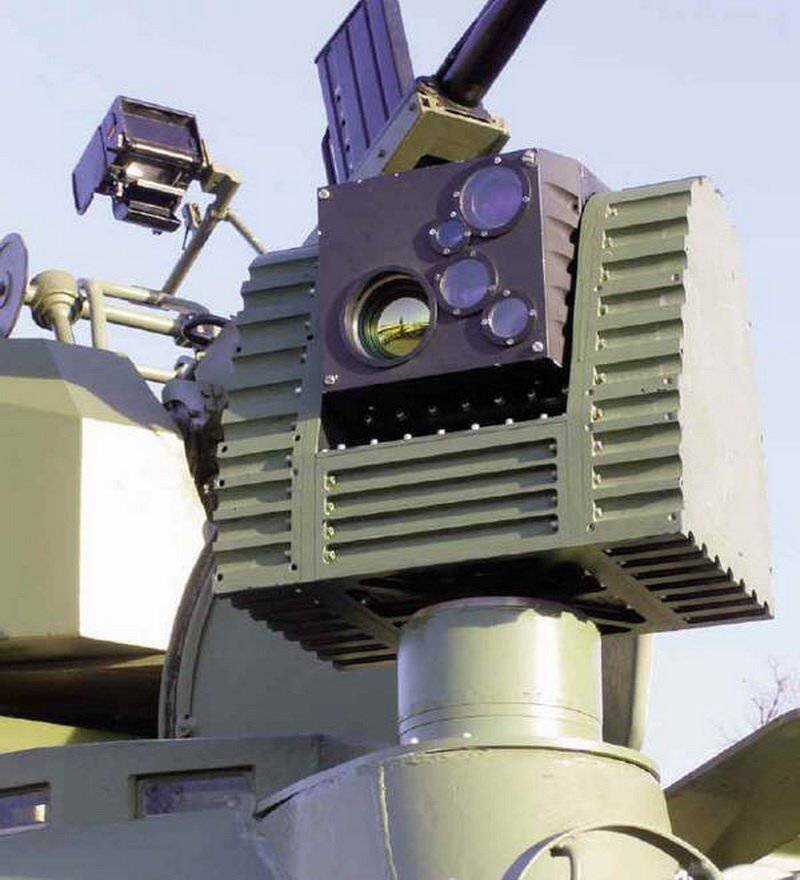 TOMS includes a laser range finder, two cameras, and a thermal imaging device.
The basic idea is that several different sensors are being combined, which work in several types of optical spectrum and, accordingly, increase the possibility of target detection. All sensors are placed in a metal case that provides ballistic protection at a distance of 250 m from 7,62 X54mm.
The two main modes of TOMS: preparatory and working. In the first version, TOMS carries out the procedure for determining relative to its own coordinate system. The second generation also makes it possible to determine the positioning of a target in space, plotting it on an electronic map.
TOMS allows you to:
- automatic camera selection (TV (1,2) or thermal imager);
- search and track the selected target.
The positions of the device can be from the combat and viewing platform when it rises to 50, see TOMS consists of several "smart" subsystems that allows you to process data and, if necessary, transfer them to the command centers of batteries or battalions. TOMS can be used on various armored vehicles, small boats, etc. 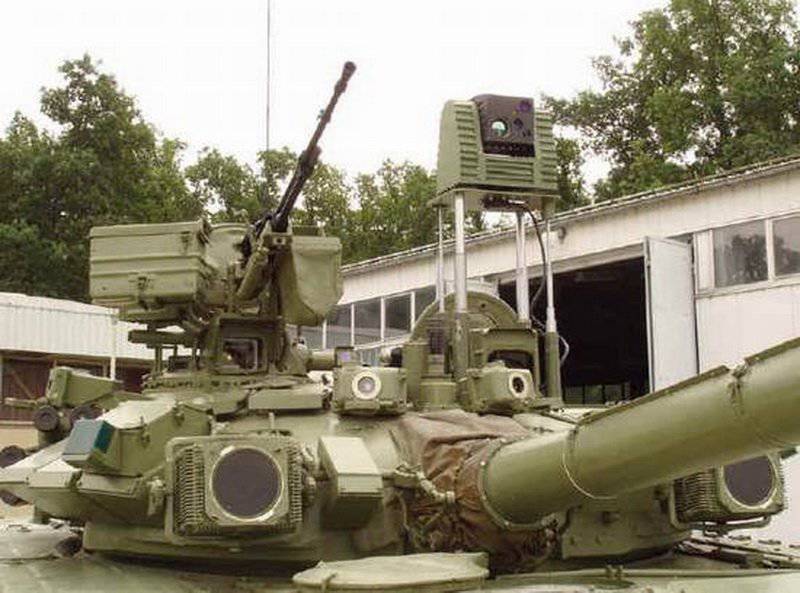