The construction of nuclear icebreakers LC-60 given the green light


On Wednesday, August 21, Russian Prime Minister Dmitry Medvedev signed a relevant government decree, which determines the amount of budgetary investment for building 2-x serial nuclear-powered icebreakers Ave 22220 60 MW (LK-60Я), the official website of the Russian government reports. The explanatory note to the resolution states that the amount of budget financing of the project in 2014-2020 will amount to 86,1 billion rubles. Ships must be transferred to the customer of Atomflot, a federal state unitary enterprise that is part of the Rosatom State Corporation, in 2019 and 2020, respectively.

In the spring of 2013, the Ministry of Finance of Russia proposed to make changes to the draft government decree and significantly limit the amount of budget financing of the project: for the first nuclear icebreaker - 38,9% of its total cost, and for the second icebreaker - 30%. The rest of the financing was supposed to be provided by attracting extrabudgetary sources. Among potential investors of this project, the Ministry of Finance considered companies that could use the Northern Sea Route to transport cargo. 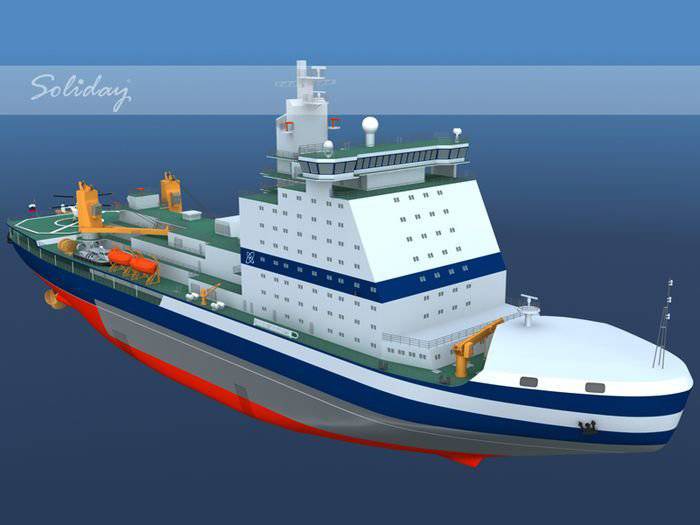 Icebreaker LC-XNUMHЯ, project
Last week, Atomflot CEO Vyacheslav Ruksha made a statement that companies that are going to work on the development of the Arctic shelf, by the year 2019-2020 may be left without sufficient icebreaking support for the NSR due to the lack of a final decision on the construction of two icebreakers on the new project LC-60Я. Ruksha hoped that the decision to build new nuclear-powered icebreakers would be made as early as September 2013 of the year, but it is already clear that 2019 is a year lost for us. According to the Atomflot Director, the first production icebreaker will be commissioned no earlier than 2020 of the year.

The competition for the construction of two icebreakers for project 22220 was announced back in January of this year, initially it was planned to be summed up by the end of February 2013, but due to the fact that the procedure for financing the project was not approved, the tender end date was postponed several times. Currently, the deadline for applications has been extended until August 28, and the results of the competition are scheduled to be announced on September 2, 2013. The main applicant for the implementation of this order is the St. Petersburg company Baltzavod, which is part of the state United Shipbuilding Corporation (USC). OSK Baltiysky Zavod-Sudostroenie LLC, a subsidiary of Baltic Shipyard LLC (all orders and personnel of the Baltzavod are transferred to it, it has a license to build icebreakers) has already submitted its application for participation in the competition for the construction of both icebreakers. It is worth noting that at present, the shipyards of this enterprise are already building the lead icebreaker of the series. At one time, the company was the only bidder for its construction and received a state order for its initial price. The construction of the first icebreaker LK-60Ya cost the Russian budget 36,9 billion rubles. This ship is planned to be delivered the fleet even before the end of 2017.

The decision to build two new nuclear icebreakers seems reasonable. Currently, the 5 of Russian nuclear icebreakers is working on the SMP. At the same time, the lifespan of the Vaygach and Taimyr low-level icebreakers ends already in 2018, and by the 2021, only one ship remains in the Russian nuclear icebreaking fleet - the 50 of the Victory Years. To ensure the uninterrupted posting of merchant ships along the routes of the Northern Sea Route, it will be necessary to lay and put into operation a new universal nuclear-powered icebreaker for the 2021 year. According to the schedule originally approved by the government, the construction of the first LC-XNUMHA icebreaker should begin on 3 on January 60, in January on the 1, an icebreaker should be laid on the slipway, and in May 2014, the icebreaker should be launched. After extensive testing, the nuclear-powered icebreaker must be handed over to Atomflot to the home port of Murmansk 2015 June 2017. The second icebreaker should start building a year after laying the first one, it is planned to lay it on the stocks of the year in November, 15, and to launch it through the year, 2019. Atomflot is to receive the December 2015 ship 3 of the year. 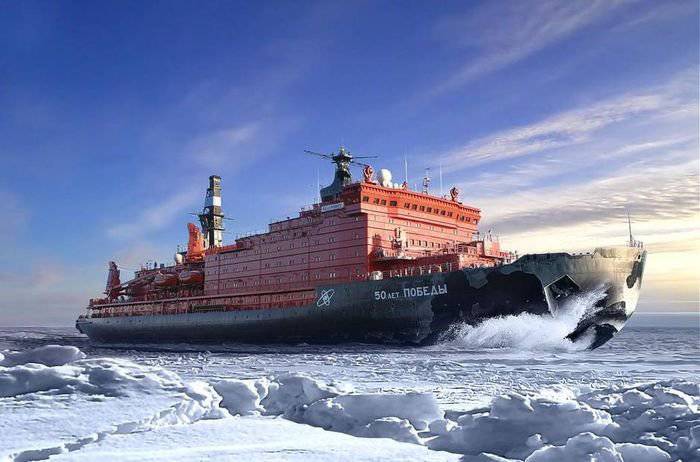 In recent years, Russia has repeatedly tried to declare itself as a state for which the development of the Arctic is one of its priorities. It is the presence of its own atomic icebreaking fleet that allows Russia to maintain the informal status of the main Arctic power. But in recent decades, due to global climate warming on the planet, almost all polar states began to think about how to strengthen their position in the Arctic. We decided to do this and countries that are far enough from the Far North, for example, China, which has plans to build their own icebreakers.

For this reason, the construction of new nuclear icebreakers by Russia looks quite justified. According to Yury Krupnov, who is the chairman of the supervisory board of the Institute for Demography, Migration and Regional Development, the people who insisted on building new Russian nuclear icebreakers did absolutely right. At present, the Northern Sea Route is a transport artery vital for the Russian Federation, which in no case can be passed on either to the PRC or to any other countries.

Over the past 3, the turnover of cargo on the NSR has almost doubled. However, while transportation is mainly carried out under foreign flags. Currently, there are not many Russian ice-class ships that could be used in the Arctic. However, by the year of 2016, when the construction of gas processing plants in the Ob Bay will be completed, the Russian cargo traffic should immediately increase by 16 million tons of cargo per year. By the way, this gas has already been sold for many years in advance to the states of Southeast Asia. In the future, 9 million tons of petroleum products should be added to it. 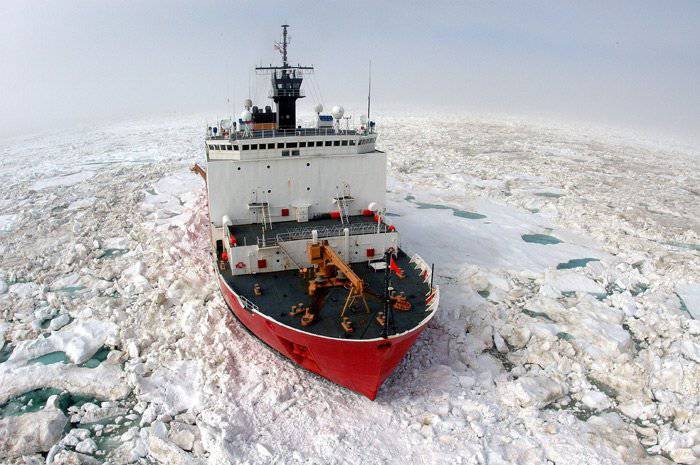 The Northern Route is continuously developing, it is not surprising that, with some observed climate warming, in the past few years, shipowners from around the world have begun to look closely at the Arctic. If new transport vessels are built that will be able to sail under the conditions of the Arctic Ocean, in the foreseeable future, the cargo traffic on the Northern Sea Route can grow tenfold. Of course, the Suez Canal, through which about 600 million tons of cargo passes annually, will not be overtaken by Russia, but the time savings that are achieved when passing from Europe to Southeast Asia through the NSR are 1,5-2 times. For some shipowners, such time savings can be crucial.

Icebreaker LC-XNUMHA The project 60 should be the most powerful and largest icebreaker in the world. Its length should be 22220 meters, width - 173,3 meters, minimum working draft - 34 meters, draft on a constructive waterline - 8,55 meters. The planned total displacement is 10,5 th. Tons. A fundamentally new two-reactor power plant of the “Rhythm-33,54” type with a capacity of 200 MW will be installed on the new icebreaker, which will replace the traditional OK-175 systems. It is reported that the new power plant will be much safer and almost 900 times smaller in size. In addition, the reactor core will be reset only once per 2 years.

It is reported that the new nuclear-powered icebreaker of the project LK-60Ya will have an increased service life (up to 40 years), as well as better ice-passing capacity (2,8-2,9 meters against 2,5 meters on old ships). The feature of the ship will be the variable draft, which will allow the use of an icebreaker in various conditions - both on the routes of the Northern Sea Route and in the mouths of polar rivers. The double ship design is a unique technical solution. A special ballast system installed on the icebreaker will allow him to change the draft from the maximum to the minimum and back. Gathering seawater in ballast tanks, the icebreaker will be able to increase its maneuverability in heavy ice conditions. During the approach to the mouths of the Siberian rivers, the atomic icebreaker will drop ballast and “float up”. 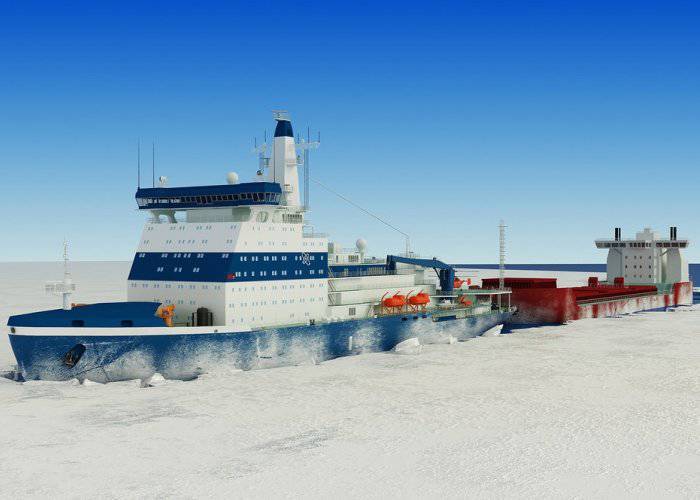 Icebreaker LC-XNUMHЯ, project
The fact that, most likely, all the new generation icebreakers will be manufactured at the Baltic Shipyard, is not an accident. According to Alexander Voznesensky, general director of Baltiysky Zavod - Shipbuilding, this enterprise is the only company in Russia that has been building ships of this class for the past 50 years. Secondly, only this enterprise is able to implement an atomic icebreaker with a capacity of 60 MW in metal without attracting capital investments. Thirdly, today only Baltiysky Zavod has an appropriate license from Rostekhnadzor for the construction of LK-60Я. The CEO also noted the fact that this very large project of the Baltic Shipyard will be able to play a very important role in the financial rehabilitation of a strategic enterprise.

It is reported that icebreakers of this type will work in the western region of the Arctic: in the Barents, Pechora and Kara seas, as well as in the shallower areas of the Gulf of Ob and on the mouths of the Yenisei. In the summer-autumn period, the LC-XNUMHA icebreakers will be operated in the eastern region of the Arctic. The icebreakers of this class will be designed to conduct ships along the NSR, provide expeditions, escort research vessels, carry out rescue operations in the Arctic, tow ships and other floating objects on clear water and in ice.

Known technical characteristics of the atomic icebreaker of project LK-XNUMHA: