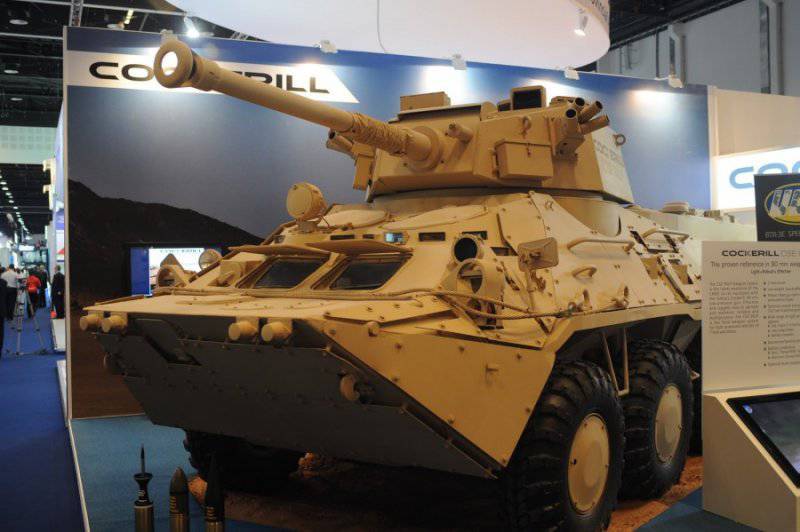 In the framework of the international defense exhibition, which was held 17-21 February 2013, in the United Arab Emirates, Ukraine presented its own production of new armored vehicles.

In addition to the KRAZ-ASV / APC / 2013 armored vehicle, which was developed in Kremenchug and made on the basis of an all-terrain vehicle, the fire support vehicle based on the CMI Defense armored personnel carrier BTR-3E armored turret was also of great interest. This machine is evidence that Ukrainian-made armored vehicles have great chances to win back their segment of the world arms market, in particular, in the industry of light armored vehicles.

This project, according to Evgeny Golubenko, director of the state enterprise Ukroboronservis, is the result of bilateral cooperation between the Ukrainian company and the Belgian company CMI. He also noted that the memorandum of cooperation between the two states was signed in 2012. The main purpose of the document was joint development and the beginning of serial production of a joint armored vehicle, which would be adapted to NATO standards. In addition, the document was aimed at finding promising new markets. 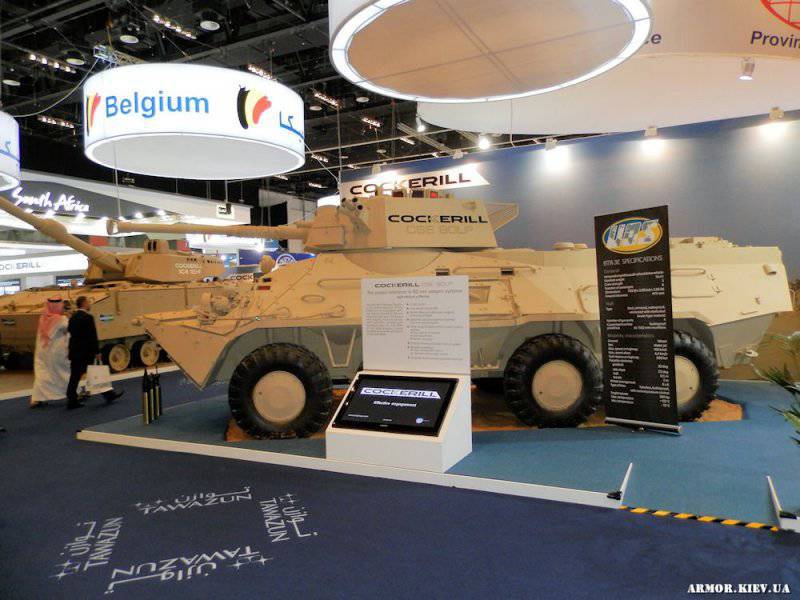 E. Golubenko also noted that the Ukrainian manufacturers specially adapted the Ukrainian armored personnel carrier for the installation of the Belgian tower, which made it possible to use 90-millimeter shells that meet the standards of the military unit. In addition, this project also provides for the use of Ukrainian guided missiles. 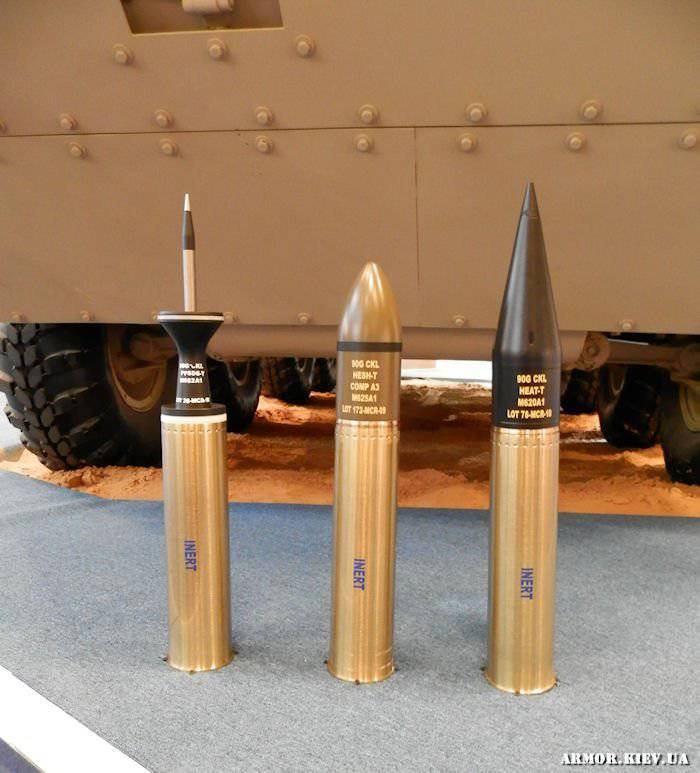 The director of Ukroboronservis emphasized that the goal of adaptation is to create a jointly competitive product and access to those markets where, by tradition, European manufacturers hold leading positions. In particular, we are talking about the Middle East and South America. Serial production was organized at the facilities of the Ukrainian enterprise “Kiev armored plant”. The implementation of this project was made possible through the use of working capital of the concern “Ukroboronservis”. At the same time, budget funds were not used at all.

In turn, the director of the Kiev factory, Vadim Shkavro, stated that the production of the armored personnel carrier is a vivid example of the fact that cooperation between Ukrainian enterprises and leading European companies is very successful, and that it is based on a fairly high level of design thought of domestic developers and the potential of European manufacturers, which fully complies with the world's stringent standards. 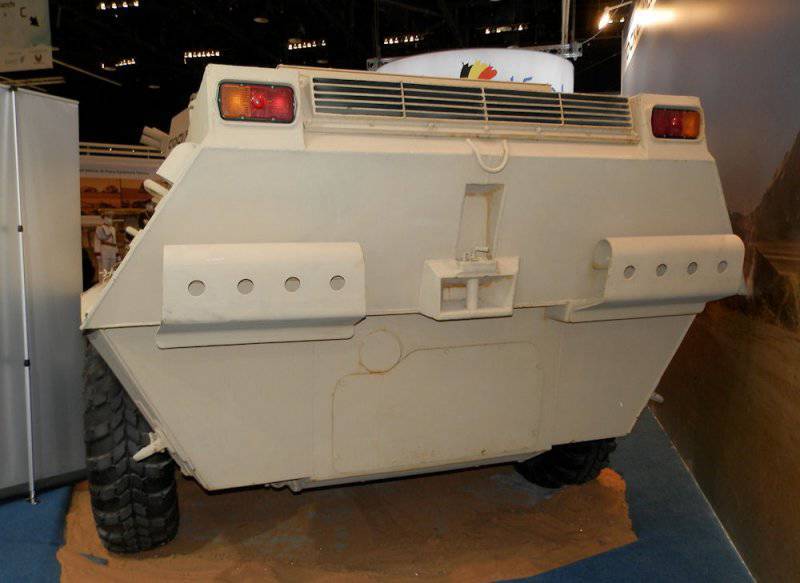 On this sample of an armored personnel carrier, you can install a variety of power plants, not only domestic but also foreign production. The main feature of the BTR-3E presented at the exhibition was the double combat compartment and the Cockerill CSE 90LP armored circular turret, equipped with a 90 millimeter low-impulse cannon and an 7,62 caliber machine gun paired with it. The substandard squad and the tower itself is a lightweight and compact combat module that is fairly simple to install on any type of armored vehicle. Thanks to modern design, high firepower and reliability, this combat module has high combat properties. However, it is very easy to manage.

It should also be noted that the combat module of the Belgian production has proven itself in the world market and exported to many countries. Currently more than 2,5 thousand units of such guns are sold. Not only modern high-explosive high-performance cumulative and sub-caliber projectiles can be used as ammunition in cannons, but also Ukrainian guided missiles. The gunner and commander of the armored personnel carrier can fire, using a digital fire control system equipped with electric pointing drives and a combined sight. The gun is manually loaded by the commander of the BTR. The use of this weapon makes it possible to solve a large number of tactical tasks: from conducting the fight against non-state military formations to conducting a full-fledged battle.

According to the developers, the low weight of the combat module made it possible to maintain a high level of mobility of the armored personnel carrier. The layout provides for the location of the control compartment in the front, the combat compartment in the middle part and the power plant in the stern. The car is equipped with a multi-fuel diesel engine with horsepower 300, which makes it possible to reach speeds up to 100 kilometers per hour. Diesel can be used at temperatures up to 50 degrees, while the range of fuel is about 750 kilometers.

The BTR-3E has a manual gearbox, which significantly reduces the cost of an armored vehicle compared to cars that have an automatic transmission. All 8 drive wheels of the armored personnel carrier can be “shod” not only in tires of domestic production, but also in tires made in France by Michelin.

The base version of the armored personnel carrier BTR-3E is a floating one. At the same time, based on the available information, this sample is not intended to overcome water obstacles (there is no water jet and a water-reflecting shield).

The armored personnel carrier is covered with Ukrainian-made armored steel - Zaporizhstal and Azovstal factories. Armor is further enhanced by the use of a Kevlar interlayer. All this guarantees the protection of the crew from the enemy's 12,7-millimeter bullets, and in addition - fully complies with NATO booking standards. Due to the successful design of the undercarriage of the armored personnel carrier and the booking structure, high durability against the effects of damaging factors of an explosion in the event of a collision with an anti-tank mine is ensured.

In order for the crew and paratroopers to feel more comfortable inside the car, the height of the troop compartment was increased. Moreover, at the request of the customer, an air conditioner can be installed in the APC (as shown by the practice of using the Ukrainian contingent of armored vehicles in Iraq - its presence is simply necessary for the effective accomplishment of tasks).

It should also be noted that devices for protection against penetrating radiation in the event of an explosion of nuclear ammunition, as well as against bacterial agents, toxic agents and radioactive dust when moving through contaminated areas are installed on this armored vehicle.

It can be assumed that the new model of an armored personnel carrier of joint Ukrainian-Belgian production can be offered not only to those countries that already have the BTR-3 (and there are currently ten such countries) as a modernized version, but also potential new customers.

Ctrl Enter
Noticed oshЫbku Highlight text and press. Ctrl + Enter
We are
Flexible firepower: a modular approach in the new family of Cockerill towersFire power for all occasions. Overview of combat modules and towers for cars of light and medium weight categories (5 part from 5)
Military Reviewin Yandex News
Military Reviewin Google News
34 comments
Information
Dear reader, to leave comments on the publication, you must to register.