Sea power of China. Through 20 years, the Celestial Empire will become the mistress of the seas

August 22 2013
26
Today, the PLA Navy is unable to fully support the foreign policy and foreign economic expansion of the country, which is due to the technical backwardness of the vast majority of the ship. Nevertheless, we are talking about one of the most dynamically developing fleets of the world, which are equipped with the newest ships.


The main problems of Chinese fleet are associated with relatively underdeveloped scientific and engineering schools in the fields of military radio electronics, rocket and aircraft engineering, and also power plants.

Today, China’s naval forces comprise about 250 thousands of people and have one Liaonin (formerly Varyag) aircraft carrier, three nuclear submarines with ballistic missiles and five non-nuclear (diesel-electric) nuclear submarines in service. ) submarines, about 60 destroyers and frigates, more 60 mine and landing ships and about 160 boats of various classes.

Nuclear-based ballistic-missile submarines (SSBNs) of the 094 Daqinqyu type will form the basis of China’s nuclear triad. Currently, the PLA Navy has two such ships. Three more are under construction. According to their characteristics, these boats roughly correspond to the similar Soviet third-generation ships - projects 667B and 667BD. 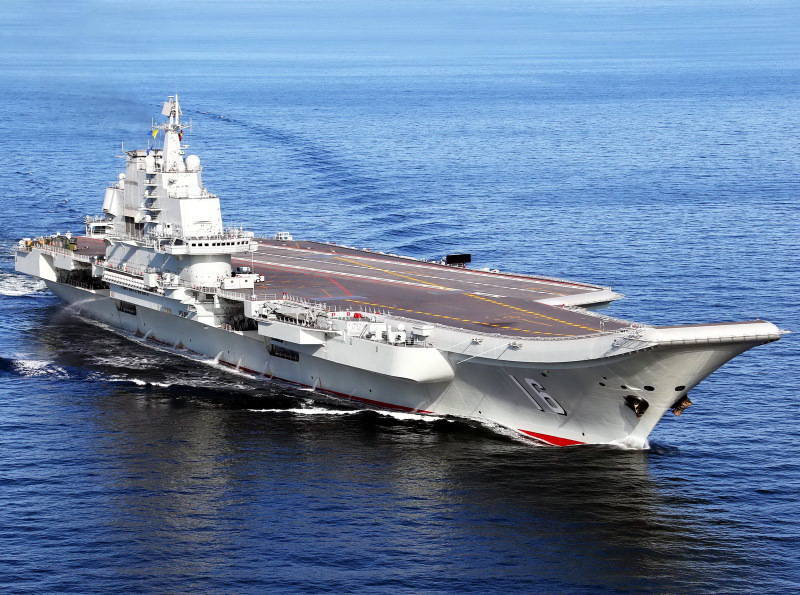 These ships can defeat targets throughout the United States, Russia and Europe. However, their high noise level by modern standards will force the Chinese naval leadership to limit the areas of use to the coastal zone, where it will be necessary to solve the problem of ensuring their combat stability from the antisubmarine enemy submarines. Given the high level of development of stationary, positional and mobile means of search for submarines in the United States, it will be very difficult to solve this problem of the Chinese Navy.

The value of these ships as a means of guaranteed retaliation will be relatively small - during the period of military operations usual weapons most of them can be destroyed by anti-submarine forces in areas of military mission or at basing points aviation and rockets.

The newest are atomic multipurpose submarines of the 093 type. The fleet has two such units and another one is under construction. Before 2020, five more types of 095 are supposed to be put into operation, which represent an upgrade of the 093 type.

According to their characteristics, these ships correspond to the Soviet submarines of the project 671РТМ. They entered service with the USSR Navy at the beginning of the 80s, and are currently being withdrawn from the combat strength of the Russian Navy as obsolete.

A prospective group of multi-purpose nuclear submarines of China consisting of seven to eight units will be able, in conjunction with naval aviation, to destroy one aircraft carrier and sink two to four escort ships from the standard AUG, losing up to half of its forces.

Among the non-nuclear submarines of national construction, one should mention one 041-type submarine, similar to the Russian submarine of the 636 project, and three types of 039. It is planned to build three more submarines of the 041 type.

In terms of their tactical and technical data, these ships are fully consistent with the world level and are able to effectively deal with modern nuclear submarines - the American Los Angeles and the Russian 971 project.

In total, the composition of the Chinese Navy expected in the near future, seven such ships.

In addition to national-built submarines, China has 12 submarines of Russian-built 636 and 877ECM projects.

Such a grouping can, in cooperation with anti-submarine surface ships and naval aviation, solve anti-submarine tasks in the coastal sea zone of China.

In general, the submarine forces of the Chinese Navy, even in the medium term, will have very limited capabilities for conducting combat operations in the ocean zone. At the same time, considering their large number, they will be able to resist (albeit at great losses) both submarines and surface ships of a potential enemy in cooperation with surface forces and naval aviation in China’s coastal zones.

Aircraft carrier on the cheap

Of the new surface ships of China, first of all, the aircraft carrier Liaoning should be noted, the commissioning of which marks the creation of the Chinese aircraft carrier forces. Received from Ukraine for only 20 million dollars at 68 percent availability, it became the cheapest aircraft carrier in the world. In the process of completion, the main technical equipment received by him (in particular, electronic weapons, air defense systems and power plant) were of Chinese design. It is supposed to have about 60 aircraft, including up to 40 J-15 aircraft (copied from the T-10K sold by Ukraine, which in turn is a prototype of the Russian carrier-based Su-33 fighter) and based on 20 helicopters Russian Ka-28. Foreign analysts, in particular American, believe that the value of this ship is small. Firstly, J-15 in its characteristics, primarily electronic equipment and weapons systems, is significantly inferior to the American F-18E (F). Secondly, it has neither airplanes, nor DRLO, EW and reconnaissance helicopters, which significantly limits its capabilities. And finally, there is practically no means of self-defense. In particular, the air defense system is capable of ensuring the destruction of only single airborne targets at low altitudes.

This ship is not able to withstand the US aircraft carrier groups, not to mention the connections. However, performing tasks in the coastal regions of China in cooperation with ground-based DRLO airplanes, he is able to repel the strikes of carrier-based tactical aviation groups of up to 16 – 20 vehicles at sea and ground targets, providing zonal cover to a depth of 400 – 500 kilometers.

It can also effectively operate as part of anti-aircraft carrier groups. But the solution of all technical problems necessary for the construction of a full-fledged aircraft carrier, is possible in China only in the medium term.

Among the modern destroyers of Chinese construction can be attributed two ships of the type 051C, the main purpose of which is to provide air defense of operational groups of surface ships.

Another new destroyer is a ship of the 052 type, the main weapon of which is the HHQ-9 SAM (64 vertical launchers). It is a copy of the Russian ship multichannel SAM "Fort-M".

China has more than 20 modern ships capable of operating in the ocean zone. The complex of air defense systems of such ships is able to repel group attacks of air attack weapons.

Of the new frigates of the Chinese Navy, 14 of the 054 type should be noted.

So, having at its disposal a certain number of modern ships with multi-channel air defense missile systems and anti-ship complexes of medium and short range, China can form up to six ship strike groups or one aircraft carrier group and two or three ship strike groups. In cooperation with nuclear submarines and naval aviation, these forces are capable of smashing one US carrier group. In this case, the loss of the Chinese side can amount to up to 30 – 40 percent of the ship composition.

The influence of other ships of the Chinese fleet on the course and outcome of warfare in the ocean zone will be insignificant, despite their relative numbers.

In the near sea zone

Of the new ships of the near-sea zone of the Chinese Navy, corvettes of the type 056 should be distinguished, which now numbers about 10 units. They have four anti-ship missiles YJ-83 and SAM FL-3000N (PU on 24 cells), as well as quite relevant anti-submarine weapons. Among the modern missile boats of China are more than 40 catamarans "Hubei 022", the main weapon of which is the anti-ship missiles YJ-83. This composition allows the Chinese Navy to form in the coastal zone up to three naval search and attack groups to combat submarines and up to 10 strike groups of missile boats with surface ships of the enemy.

The loss of the Chinese Navy can be up to 30 percent naval vehicles, 30 – 35 percent of frigates and up to 40 percent of missile boats.

As part of the naval aviation of China, its strike component is the most developed — aircraft designed for striking surface ships.

The modern ones include 48 Russian-made Su-30МК2 and its Chinese copy J-16, a number of new fighters J-10A. The 54 fighter-bomber JH-7A and 124 fighter J-8 will also have combat significance.

These forces are able to provide cover from enemy air strikes (up to 40 machines) to the naval forces of the Chinese Navy when hovering from DRLO aircraft to a depth of 400 kilometers from the coast.

On the surface ships of the opposing side, these forces can deliver group strikes to a depth of 500 kilometers from their coast.

Anti-submarine aviation in China is represented by 60 helicopters of Russian and Chinese origin and is able to counter enemy submarines up to 50 – 10 kilometers from the coast. That is, it cannot make a substantial contribution to the fight against enemy submarines.

Thus, at present, the ship structure of the Chinese Navy, as well as the fleet of naval aviation, can operate effectively only in the near sea zone under the cover of ground defense aviation.

The main problems of the Chinese fleet are associated with relatively underdeveloped scientific and engineering schools in the areas of military electronics, rocket and aircraft construction, as well as power plants.

Overcoming these problems will allow China in the medium term, with the release of a sufficient number of modern surface ships and submarines to become one of the leading naval powers.

The situation when the Chinese Navy gains absolute superiority while maintaining current trends in both China and Russia comes about in 7 – 12 years, it is then that the main part of the Chinese shipbuilding program will be executed.