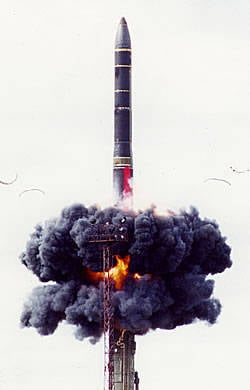 The new nuclear combat equipment of intercontinental ballistic missiles developed in Russia will be able to overcome all existing and prospective missile defense systems. This was stated by the general designer of the Moscow Institute of Thermal Engineering (MIT), Yuri Solomonov.

"In 2010, we had a unique job that allowed us to make a fundamentally new step in creating a new type of combat equipment, which is the result of integrating ballistic type combat equipment with individual means of breeding it in exchange for the so-called" bus "on combat missiles," said Solomonov .

According to him, this development "will put an end to all the conversations regarding our fight with the non-existent missile defense system of the alleged enemy." Solomonov noted that “almost 30 years ago we were talking about the possibility of implementing such a combat equipment scheme as science fiction.” “And last year we first put this science fiction into practice with a positive result,” said the designer.

He explained that now "the rocket, as a whole, practically ceases to exist after the completion of the last marching stage." "As is known, the existing rocket has a huge section of breeding warheads in order to have certain defeat possibilities in the case of using the multiple warheads of a single rocket for several targets that are distant from each other," said the designer.

According to him, "now the task is to ensure that this idea has already been adapted to existing missiles and missile complexes." “This in itself is not an easy job, it will take several years,” said Solomonov. He noted that Topol-E experimental missiles will be used to work out new combat equipment.

Thus, it turns out that the new nuclear combat equipment of Russian intercontinental ballistic missiles must also successfully withstand the US missile defense system, which the Kremlin considers to be directed against Russia. In response to the US plans to deploy missile defense systems in Europe - in Moscow, Iskander missiles were threatened to be deployed in the territory of the Kaliningrad region.

At the same time, it was reported that despite its high cost, the vaunted American system does not work, writes NEWSru.rom. In particular, in the 2008 year, the Pentagon report said that the US missile defense system had already cost the US $ 100 billion, but the US military was facing problems when launching training targets.

Recall the sea-based intercontinental ballistic missile "Bulava" will be put into service in the 2011 year, if the planned test launches are successful. “Tests will be resumed in summer when the White Sea is freed of ice. In total, 2011-4 of the Bulava launches from the fourth generation rocket carrier are scheduled for 5,” Yuri Dolgoruky. If the tests are passed with a positive result, then it will be absolutely enough for the ship’s missile system to be put into service, ”said Solomonov.

He said that the missiles for the upcoming test launches have already been made. "Within two years, we must equip the submarine. (Yuri Dolgoruky, which should have the Bulava 16 missiles in service). That is, we will produce as many missiles on it as missiles. Plus, we’ve got a backlog for control launches. Today it is an absolutely solvable problem, "said Solomonov.

The 15 test launch of the Bulava missile from Yury Dolgorukiy was scheduled for December 17, but was postponed due to the unavailability of the submarine. The previous 14 Bulava test launches were carried out from the onboard of the nuclear-powered strategic missile cruiser Dmitry Donskoy, which was specially converted to launch a new missile. Of the 14 Mace test launches, seven are considered successful or partially successful, the rest are emergency.

“There is no sense going back to the launches from the Dmitry Donskoy nuclear submarine. We already used it for these purposes, and it was a pioneering decision, since the ground stand ordered to live long and needed huge amounts of money for its implementation "- said Solomon.

The starting platform for further testing of the Bulava before adopting a missile is, of course, the Yuri Dolgoruky, as well as all the boats of this family as they are commissioned, because they must also be certified by Bulava launches, the expert noted. " If the first test launch this year from the submarine "Yury Dolgoruky" will be worked out successfully, we will conduct all further launches from it, "said Solomonov.

“Perhaps, in the process of control shooting, when solving some additional special tasks, Dmitry Donskoy will be used as a launching stand, since everything there is adapted for carrying out these launches,” added Solomonov.

On the stocks of the "Sevmash enterprises" in Severodvinsk, serial 955 project ships of the same type with the "Yuri Dolgoruky" - "Alexander Nevsky" and "Vladimir Monomakh" are currently being built. The construction of the strategic cruiser "St. Nicholas" is also planned. The missile carriers will receive the Bulava intercontinental ballistic missile. In total, according to the state armament program, it is planned to build 2017 ships of the 8 project before 955.

Р30 3М30 "Bulava" (RSM-56 - for use in international treaties, SS-NX-30 - according to NATO classification) - the latest Russian three-stage solid-fuel rocket, designed to arm the promising atomic submarine strategic rocket carriers of the Borey project. The rocket is capable of carrying up to ten hypersonic maneuvering nuclear blocks of individual guidance, capable of changing the flight path in height and course and hitting targets within a radius of up to 8 thousand km. The Bulava will form the basis of a promising group of strategic nuclear forces of Russia up to 2040 - 2045.

Technical developments used in the Bulava sea-based intercontinental ballistic missile can be used in strategic ground-based missile systems, Solomonov said. "I want to emphasize that about half of what has already been implemented in the Bulava is also implemented in the RS-24 (Yars) rocket (solid-fuel intercontinental mobile-launched ballistic missile with a divided head)," said Solomonov.

However, he noted that if we talk about the technical appearance of the Bulava, which would allow to solve this problem, it is possible in this rocket from the point of view of its technical characteristics.

Constructor said: "The rocket itself in the cost of a shot is approximately 25-30%, all the rest is the whole complex. And in order to link one with the other, this is not done overnight." “We need to bring to mind what we are doing now. If this issue is raised later, then we need to return to it, as is usually done from a design and technical point of view,” said Solomonov.