Who will say his last word in the war - a man or a robot?

August 16 2013
65
Humanity cannot afford the risk of losing the right to kill with machines. If someone thinks that this statement from some fictional universe of the movie “Terminator”, in which the Skynet network of supercomputers has unleashed a war to destroy humanity, he is simply greatly mistaken. This is quite the official call of the UN Special Rapporteur on extrajudicial executions, arbitrary executions or summary executions, Christophe Haynes. This 30 specialist in May 2013 spoke at the UN Human Rights Council for introducing a global moratorium on the manufacture and placement of lethal autonomous robotic systems (Lethal Autonomous Robots or LARs).


“If ordinary UAVs still need a person at the controls who would be responsible for deciding on the use of lethal force, LARs are equipped with computers that are able to decide who will be their next goal,” worries a law professor from SOUTH AFRICA. He is confident that a war without proper reflection is a mechanical slaughter, meaning it is human thinking. Haynes doubts that even the most sophisticated of the AI ​​samples are able to follow the main rule of any modern armed conflict - to distinguish between legitimate military objectives and objects. This is especially relevant, since the prospect of using artificial intelligence in military operations is a matter for the near future, perhaps this future has almost arrived.

One of the opponents of developments in the field of military robotics, Chris Jenks, who is a professor of military law, notes that many have misunderstood that autonomous defense systems have been around for about 20 years and more than once their mistakes led to human victims. In the course of both military conflicts in the Persian Gulf, the American Patriot air defense missile systems mistakenly identified the enemy and shot down the American plane in one of the wars and the British plane in the second. And 5 years ago in South Africa there was a tragedy that claimed the lives of 9 soldiers. Then the rapid-fire automatic "gun-robot" went out of control and opened indiscriminate fire, it stopped, just shooting the entire ammunition.

The first fully autonomous UAV (Condor project) was created by DARPA back in 1988, and the Israeli army has been armed with Harpy automatic UAVs - projectile shells that are designed to destroy radar stations for more than 20 years. Also in service with the American fleet The Phalanx missile defense system is located, which has tasks for the automatic detection, tracking and destruction of air targets, including aircraft and anti-ship missiles. Ground forces also have an analogue of this complex - the C-RAM system. In addition, not so long ago, the U.S. Navy launched another X-47B UAV, which is able to independently carry out its flight plan, and human intervention in its control is necessary only in emergency cases. 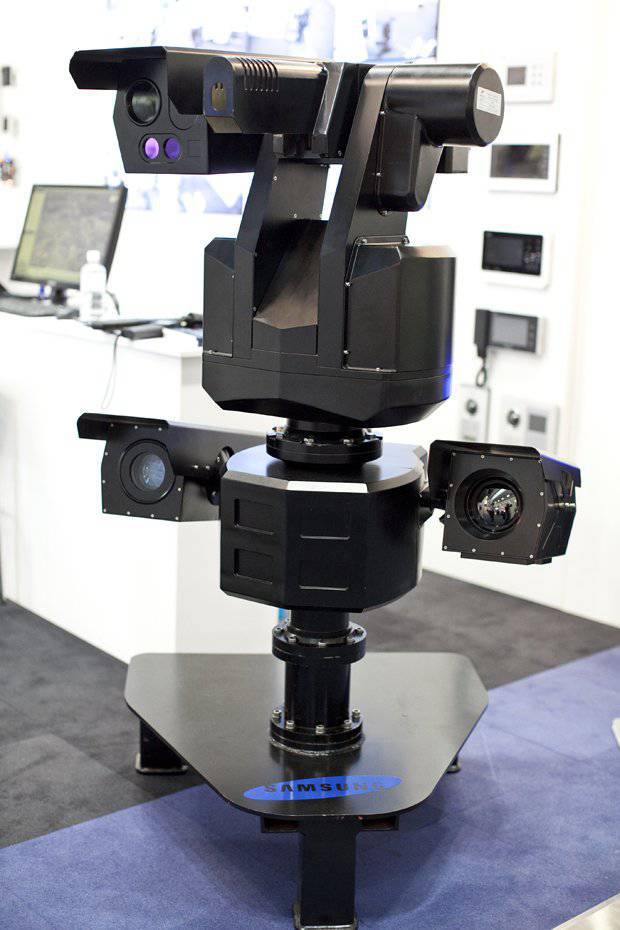 Samsung SGR-1
In his report, Haynes cites several more examples of the use of robots, some of them have much more in common with the "terminators". For example, South Korean security robots, which were designed by the military unit of Samsung. They are currently serving on the border of South Korea with the DPRK. And although the actions of these robots are still managed by a human operator, they can function in fully automatic mode.

Samsung's robot robot was designated SGR-1 (Security Guard Robot). Initially, it was created specifically for the protection of the demilitarized zone on the border of the two Koreas. This robot is a combination of a series of monitoring and surveillance devices, as well as “suppression”. Its structure includes observation and detection devices, the robot is equipped with a highly sensitive high-resolution video camera, a laser range finder and a thermal imager. Installed on it means of suppression can be very diverse - from exotic acoustic guns, causing the enemy dizziness and temporary deafness, to gas and firearms weapons.

The SGR-1 robot guard is able to automatically recognize targets at a distance of up to 4 km. in the daytime and up to 2 km at night. It can activate and direct the detected enemy to various means of suppression, and also - depending on the program of the mission - to make independent decisions about the need to use weapons. The accuracy of the shooting of the robot is ensured by the installed stabilization system and is controlled by a special target tracking module, which can function in both manual and automatic mode. Moreover, this robot is not self-propelled, it is stationary. In military terminology, the definition of “guard” than “patrolman” would be more appropriate for him.

Created their own combat robots and the UK. In particular, an automatic UAV is being developed by BAE. Taranis drones, built using stealth technology, are able to carry out intercontinental flights and can carry a variety of weapons on board to destroy both ground and air targets. The first test flight of a Taranis UAV will have to be made already in 2013. It received its name in honor of the Celtic god of thunder. The development of the project is conducted by the aerospace division of the company BAE and МD, starting from December 2006. This project has already cost the creators of 223,25 million dollars. As experts believe BAE, their drone Taranis will be the most invisible and will have increased autonomy. 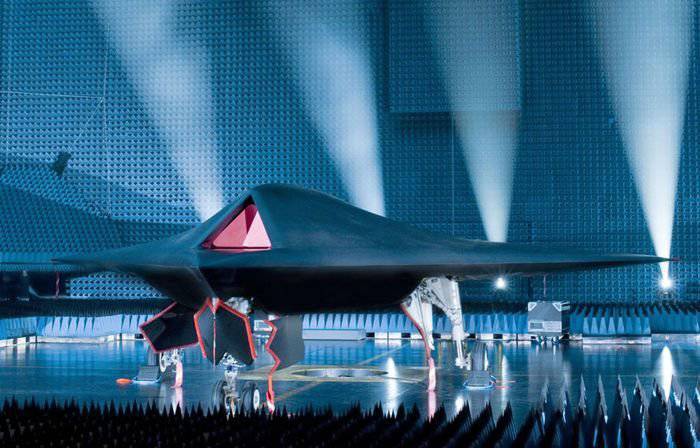 Drone taranis
According to published materials, the Taranis drone will combine a number of modern technologies that will allow the on-board computers to be used to perform complex air maneuvers, define targets and evade threats. Flight managers will only have to confirm the attack. Despite the fact that the drone looks like a toy - it is not a toy at all. The device has an impressive size: the wingspan of the drone, made by technology "stealth", is about 10 meters, and its length - 11 meters. In flight, the device will be able to develop supersonic speed.

However, according to British Foreign Minister Alistair Byrd, London is not going to develop automatic robotic systems for use in war. Yes, and the United States back in November last year, through the official directive of the Pentagon, they said that they wanted to preserve “the appropriate level of human participation when using force. This undeclared moratorium will last for 10 years. By the end of this period, they believe in the United States, the Pentagon will be completely puzzled by the issues of repelling the threat posed by the PRC, and the need for an adequate response dictates the continuation of work in creating and improving military robotics.

True, it should be noted that from the full-fledged AI, which could independently determine its actions in the theater of hostilities, all the systems described above are far enough. So, both in London and in Washington, they can declare the need to find the human hand on the control panel only because, in reality, it is simply impossible to do without human control. In turn, employees of the US National University of Defense believe that the design and creation of fully autonomous combat systems seems quite likely in the next few years.

In the creation of artificial intelligence also marked significant advances. The American company IBM is actively testing its Watson supercomputer, which has access to 200 millions of pages of structured and unstructured information that a computer can process in just a fraction of a second. Since February this year, the Watson computer has been officially used to diagnose and treat cancer. The supercomputer operates with “big data”, statistical information from many oncological clinics, which generalization would not be possible for ordinary doctors. 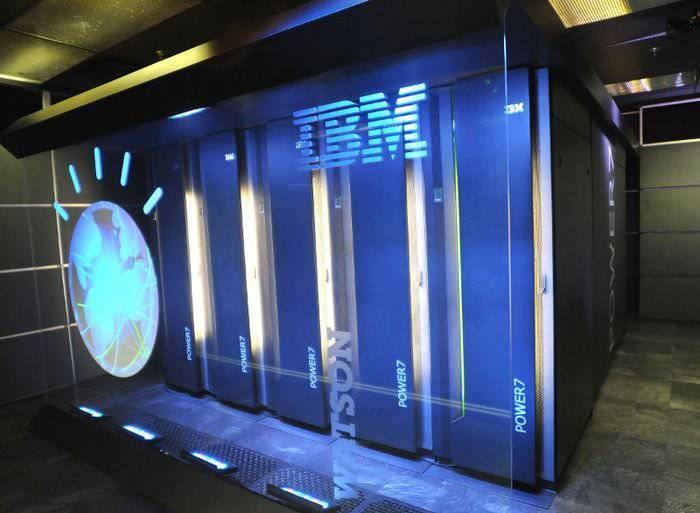 Watson supercomputer
The Watson supercomputer, developed by IBM engineers, is able to completely replace the automated systems that respond to customer calls. “Artificial Intelligence” will be able to independently provide advice on smartphones and tablets, by phone, in online chat rooms, SMS and email. The technology created by Nuance is responsible for processing the human voice in it. For example, the Watson supercomputer is able to explain all the subtleties of savings instruments and pension savings to clients of the bank, and to subscribers of cellular networks how to connect this or that service to replenish the balance of their account.

This supercomputer became famous after being able to defeat American experts in the television game Jeopardy in 2011! (analogue of "His game" in the Russian Federation). Since then, the supercomputer is in very high demand from American commercial organizations. IBM engineers spent more than 4's on creating it. The Watson supercomputer is able to perform on the order of 80 trillions of operations (teraflops) per second, its RAM is equal to 16 terabytes, and the heart of the computer is a processor running on 2800 cores.

One of the most complex programs written for it is DeepQA, which can handle incoming questions posed to a computer in natural language. It is the understanding of the human proposal that distinguishes the Watson supercomputer from the ordinary search engine, which is only able to produce a list of results in response to specified keywords.

Another well-known corporation, Google, is also working on creating artificial intelligence. Based on the developments of the Laboratory of Artificial Intelligence at Stanford University, the company's specialists have created a prototype of a fully autonomous car. The on-board computer of such a car is able to track a huge number of various environmental parameters, even the mimicry of drivers who move in the neighborhood of the car. 12 of such machines by August 2012, were able to overcome 500 thousands of miles. (in total) without a single accident. Cars moved along the roads of California and Nevada, 2-s from 3-s of the US states, in which the free movement of such devices is already allowed at the legislative level. These systems are self-learning, which, according to their creators, can be considered a breakthrough in the field of robotics. 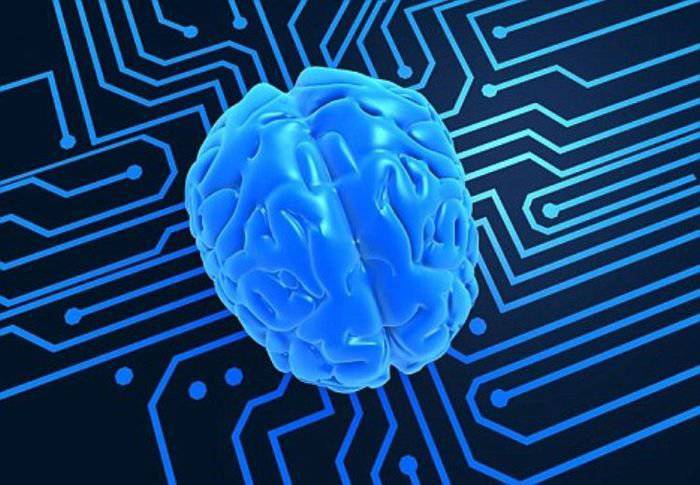 Naturally, such developments are of interest to the military, who also conduct their work in this direction. Very soon, many modern types of weapons can get a full-fledged artificial intelligence. And that means the question of who will say the last word in the war - a person or a robot - is becoming increasingly relevant.