Airships have returned to Russia

August 15 2013
33
In Russia, the presentation of the first in the country "airship" took place. She passed 8 August 2013 year in the city of Kirzhach, located on the territory of the Vladimir region. Here “Avgur Aeronautical Center” presented a Russian-made airship AU-30. Modern Russian airships are planned to be used for the transportation of goods, solutions for technical work, for tourist purposes. At the same time, the project leaders promise that, despite the fact that basically the vehicles will be supplied to the military, they will be able to generate income. The first commercial contracts for airships AU-30 "Augur" plans to conclude in September this year.


The aeronautical base in the city of Kirzhach began a new life. Created at the beginning of the century, it could not survive the 2008 financial crisis of the year. The machinery located here suffered from vandals and eventually became inoperable. However, now the specialists of the Avgur Aeronautical Center again restored the base, as well as one of the airships AU-30. The plans of "Augur" - the organization of the test and experimental units. It is assumed that they will be needed to put into practice the next rather large project of the company - the creation of the Atlant multi-purpose airship. It is planned that Avgur itself will be able to train technical specialists and pilots, of whom there are very few in Russia at present. The second airship AU-30, which is currently inoperative in the hangar, will be restored and will be used to test components and assemblies of the new airship "Atlas".

According to representatives of the Russian company, the airship AU-30 today meets all the latest requirements of the airship. The airship is quite economical to operate, given the use of expensive helium: firstly, it flies without the consumption of lift gas, secondly, the natural leakage of helium is minimal, its shell is made of composite material. AU-30 can perform a vertical take-off, and the navigation equipment installed on the airship ensures its round-the-clock operation. 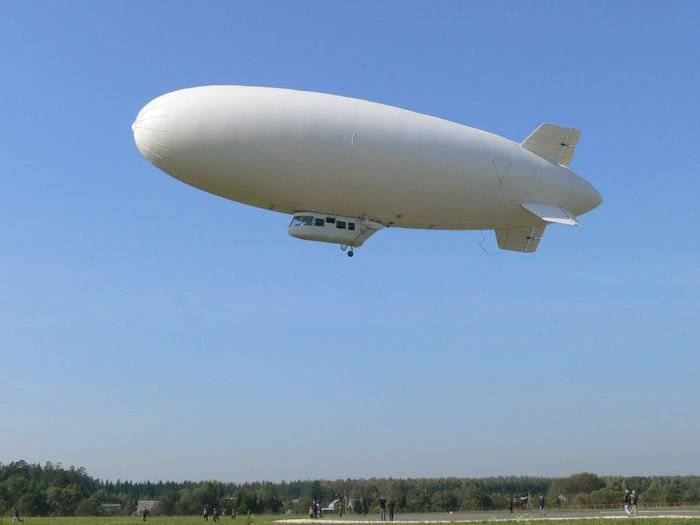 It is assumed that the airships AU-30 can be used for technical monitoring, patrolling the area, taking photos and video and for tourism purposes, the implementation of rescue operations. Elite tourism should be another area of ​​use of the airship. A representative of the Augur company noted that, of course, we are ready to revive dirigible tourism: these are unique sensations, a unique experience. He also noted that airship tourism will remain entertainment for wealthy citizens. According to the company, in order for the business to pay off, a one-hour flight on the airship will cost 400 euros to the tourist, provided that there is some kind of advertisement on board the airship.

In the design of the new Russian airship AU-30, the basic concepts of modern airship construction were implemented - this is a flight without spending lifting gas, the ability to take off and land both vertically and with a shortened takeoff run, use of modern propeller equipment in the vertical plane . Its shell was made of modern fabric-film material.

The airship AU-30 can rightly be attributed to the airships of the new generation. Flight navigation equipment installed on it allows you to make long flights at any time, day or night, in the most comfortable conditions for the crew of the airship. The unique system of automatic piloting installed on it allows to pass with high accuracy along predetermined routes. Cost-effective power plant and a large supply of fuel allow you to make long-range flights. 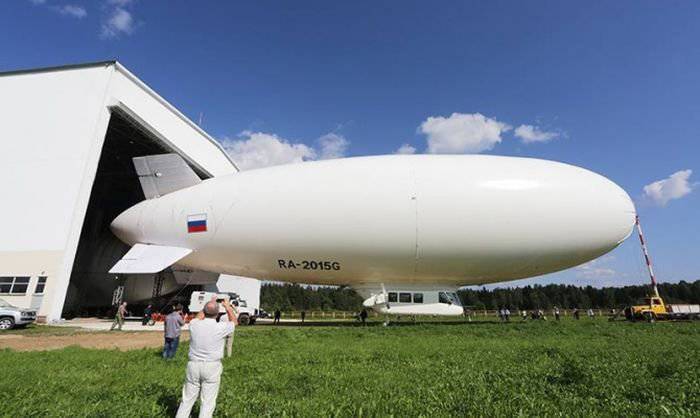 Due to the possibility of using such piloting methods as reverse, “raznotag” of engines and a change in thrust vector in a wide range, the airship was provided with a very high degree of control at low flight speeds. The layout and size of the gondola allows, depending on the purpose of the airship, to release it in a variety of versions - passenger; patrol, with the possibility of placing on board a wide range of equipment that allows you to solve problems in all types of aerial photography and video, security and monitoring of public events, minerals and other objects of interest to the customer; with VIP lounge for elite tourism. Currently, the certification of the aircraft in accordance with international and Russian requirements for aircraft of this class is underway at high rates. Already, AU-30 has a fairly large circle of customers, and there is no doubt that new opportunities will open up for it in the future.

Airship AU-30 for work and leisure

According to Mikhail Talesnikov, Commercial Director of Avgur Aeronautical Center CJSC, the first contracts with commercial customers of the airship can be concluded in September 2013. “We cooperate quite closely with many administrations of the northern regions of the country, but the Yakutian administration is most interested in the airship. We wanted to deploy aviation center near Yakutsk and carry out a wide range of work there: technical monitoring of vast territories, exploration, ”Talesnikov shared his plans.

According to Mikhail Talesnikov, the AU-30 airship fits much better than the helicopter for the above purposes. As an example, he cited the monitoring of power lines. Today in Russia more than 100 thousand kilometers of power lines. Their status must be monitored by 150 various parameters. To do this, use a laser scanner and a set of sensors. These devices function poorly with high vibration, which creates a helicopter flying at low speed. In addition, these works are very often carried out with the use of the Mi-8 helicopter, which is not particularly fuel-efficient and environmentally friendly: the airship AU-30 burns 20 times less fuel. “Today it is done on a Mi-8 helicopter that burns 800 kg of fuel per hour. We burn the entire 40 kg of fuel to perform the same work. We fly slowly and without vibration. In this regard, the airship is the ideal carrier, ”said Talesnikov. According to him, AU-30 is excellent for work in the northern regions of Russia: the airship is certified for flying at temperatures up to -40 degrees and can be refueled with ordinary motor gasoline. 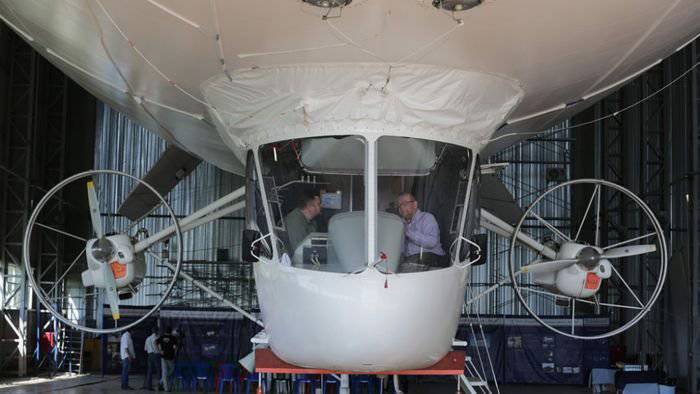 The second application of airships AU-30 may well be an elite tourism. At the same time, the company emphasizes that, on the one hand, such use of airships is less beneficial for Avgur; on the other hand, airship tourism will continue to be entertainment for the wealthy public. It is planned that the AU-30 will be able to fly, for example, over the “Golden Ring” - while the flight speed will be in the range from 60 to 100 km / h, depending on the wind direction. At the same time, the president of the Augur company, Gennady Verba, believes that the use of the airship as a regular transport is not practical - the AU-30 airship is able to take on all 8 people.

However, all plans for a brighter future so far rest on the lack of necessary certificates from the company. It is assumed that the entire package of necessary documents will be available in the coming year. During this time, the company must obtain a certificate of the MAC and validate it in EASA. After that, it will be possible to begin deliveries of AU-30 airships abroad. According to Mikhail Talesnikov, several dozen customers from abroad were already interested in the products of the Augur company. In total in the world, according to his estimates, the need for airships of this class is estimated at 200 units. Only in Russia may be required to 100 such airships. With such a need, the company will be able to enter the production of 10-12 airships annually. According to Talesnikov, already now “Augur” is able to produce 4-5 airships per year, the cost of the airship AU-30 begins with a mark in 3 million dollars and may vary depending on the configuration.

In the future, the company is going to go through an IPO.

The next major project of the Avgur company is the development of the Atlant airship, which should become an economical, roomy transport airship capable of carrying various cargoes over long distances. It is reported that, depending on the modification, Atlant will be able to lift up to 250 tons of cargo into the air, transporting it over a distance of up to 5 thousand km. The creators of the airship say that this unit will combine the best qualities of the aircraft, helicopter, airship and even a hovercraft. And among other things, he will be able to take off and land from any surface, even with water. According to Augur representatives, the payback of Atlanta will be possible through 4-7 years after its acquisition and will depend on the type of work and the airship loading. 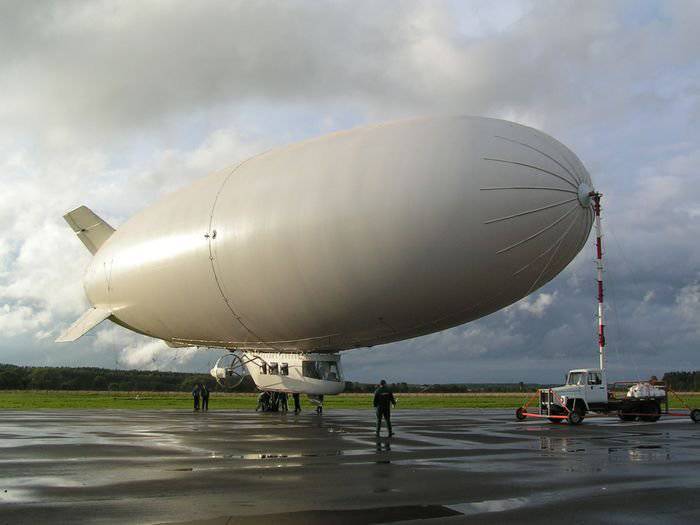 This project is funded by the Skolkovo Innovation Fund. At the stage of creating a prototype of the Atlas airship, where this program is now located, the foundation finances 75% of works, another 25% of works is financed by a co-investor. At the stage of creating the Atlanta pilot design, the share of the Skolkovo Foundation will be 50% financing.

The Russian company has very serious plans for the Atlant airship — after the implementation of this project, the company intends to enter an IPO. “Everything we are doing now is tied to commerce. Firstly, we cannot afford not to earn money, since we are business people. Secondly, we want to be useful, ”notes Mikhail Talesnikov. However, according to Talesnikov, the project of the Atlant airship will be implemented no earlier than in 4 of the year. In the meantime, the company intends to seriously engage in the commercialization of its finished project - AU-30.

Flight specifications of the Au-30 airship: