The Northern Fleet will go to the Arctic Ocean

August 12 2013
14
On the eve of recent Naval Day Fleet fleet commanders of this type of the Armed Forces held several press conferences, during which they spoke about the latest achievements and plans for the future. Perhaps one of the most interesting from the point of view of the development of the fleet and its operational plans was the statement by the commander of the Northern Fleet, Admiral V. Korolev. According to him, in the very near future, the sailors of the Northern Fleet will make several major campaigns. 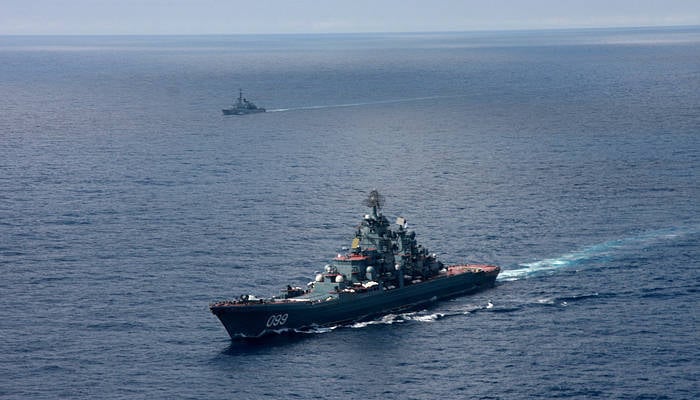 For example, over the next few months, a group of ships of the Northern Fleet, headed by the heavy nuclear-powered missile cruiser Peter the Great, will go to the eastern regions of the Arctic Ocean, where it will carry out its combat training tasks. The second planned cruise of ships will be timed to the centenary of the expedition to the North Pole by G. Sedov. During this event, several ships of the Northern Fleet will go to Franz Josef Land, where they will also conduct all the necessary combat training operations.

It should be noted that the planned trips to different areas of the Arctic Ocean and its seas will not be the first in the newest stories. In October last year, a detachment of ships of the Northern Fleet had already made a similar expedition and conducted several training events. For example, for the first time in the history of the Russian Navy, a landing party was landed on the unequipped coast of the Kotelny Island (the Novosibirsk Islands). In the course of those exercises, naval sailors studied new areas, and the marines tested their skills in the landing area on an unfamiliar coast.

In this way, news last October and recent statements by the commander of the Northern Fleet clearly indicate the plans of the Russian Navy command for the future. Following the planned trips, we should expect the next such events, the purpose of which as a result could be the permanent duty of the ships of the Northern Fleet in the northern seas. Among other things, this suggests a change in the area of ​​responsibility of this operational-strategic alliance of the Navy. Previously, the Northern Fleet worked only west of the Barents Sea. Now the sailors of this fleet will have to patrol the waters of other seas washing the northern regions of Russia.

The presence of ships of the Northern Fleet in the seas of the Arctic Ocean can pursue several goals at once. First of all, it is, of course, a demonstration of the flag and strength. Russia has the longest maritime boundary beyond the Arctic Circle, which requires it to apply appropriate geopolitical and military measures. Another, more utilitarian, goal is to protect the country's economic interests in the northern regions. In this context, it is possible to recall both the mineral reserves of the Arctic shelf and merchant shipping. Due to the specific climate, the Arctic Ocean and its marginal seas are very difficult to develop, but in some cases the complexity of use is offset by potential benefits. An example of such a calculation is Chinese plans. At present, China intends to build an icebreaking fleet to transport various cargoes to Europe along the Northern Sea Route.

An equally important reason for the presence of ships in the seas of the Arctic Ocean is the issue of strategic security. It is the northern seas that are the most convenient area of ​​the planet in which NATO can deploy its ships with missile defense systems. Being in the waters of the Arctic Ocean, an American cruiser or a ABM destroyer can most effectively intercept Russian intercontinental ballistic missiles aimed at US facilities in the active leg of the flight. Thus, in the near future, the ships of the Northern Fleet may receive a new important task: assistance to strategic missile forces and counteraction to sea-based foreign missile defense systems.

The last task for Russian sailors, who will have to serve in the seas of the Arctic, will not be as noticeable as the previous ones, but no less important in military and economic terms. Part of the waters of the marginal seas of the Arctic Ocean is not sufficiently studied. In the case of some areas, there is even no information on the depth of the sea or ocean at one point or another. In the past, these data could not be collected for a number of climatic and organizational reasons. Now, thanks to the reduction in the amount of ice, it became possible to perform not only combat missions, but also help science, collecting the necessary information. Of course, not only warships, but also specialized scientific vessels will be engaged in a detailed study of the northern seas.

Of course, all the issues listed will be resolved not immediately, but gradually. Unfortunately, the state of the Russian Navy so far does not allow ships to be constantly on duty in a particular area. However, it should not be forgotten that any such large and important business begins with the first small steps. Last year's trip to the Novosibirsk islands with the landing of troops, as well as planned trips to the eastern regions of the Arctic Ocean and to Franz Josef Land are the very first steps in a big deal. Thus, for several years, the Northern Fleet will not only be able to make trips to the seas of the Arctic Ocean from time to time, but also be constantly on duty in these areas, representing the interests of Russia there and solving the assigned tasks.

Ctrl Enter
Noticed oshЫbku Highlight text and press. Ctrl + Enter
We are
Conquerors of the "Kingdom of Ice". Russia celebrates the day of the polar explorerRussian throw to the North
14 comments
Information
Dear reader, to leave comments on the publication, you must to register.