The submarine "Kronstadt" will be completed 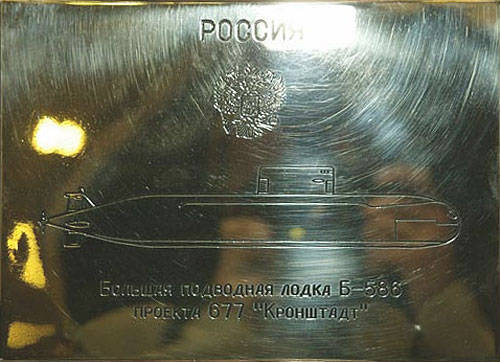 According to the press service of the shipbuilding enterprise Admiralty Shipyards OJSC (St. Petersburg), one of the most complex and controversial projects in the newest stories Russian Navy will soon get off the ground. On July 9, the management of the shipyard and the Ministry of Defense signed a contract, in accordance with which the construction of the diesel-electric submarine Kronstadt of the project 677 Lada will continue. Four years after the suspension, construction will resume and in the coming years the fleet will receive a new submarine.

DEPL B-586 "Kronstadt" was laid eight years ago, at the end of July 2005. It was planned that at the beginning of the current decade it will enter the system of the Russian naval fleet following the lead submarine of project B-585 "St. Petersburg". However, the failure to test the first submarine type "Lada" first affected the pace of construction, and then led to its freezing. Numerous flaws in the project, due to which the St. Petersburg boat could not achieve the required indicators, led to the suspension of the entire construction program of the project 677 diesel-electric submarines. Until recently, the constructed units of the Kronstadt construction were on a slipway and were waiting for the decision of the leadership of the military department and industry . Now the construction will continue. 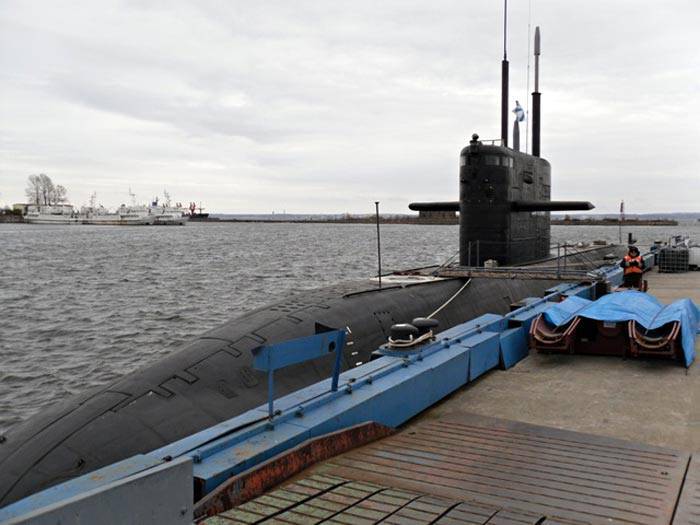 PL B-585 "St. Petersburg" pr.677 in Kronstadt, November 2010 (photo from the archive of Vladimir Vladimirovich, http://military.tomsk.ru/forum)

The announced deadline for delivery of a new submarine to the customer is 2017 year. By this time, it is planned to complete the assembly of all structural elements, install new equipment and carry out all the necessary tests. According to the official material of the Admiralty Shipyards, the construction of a new diesel-electric submarine will continue in accordance with the updated project. CDB MT “Rubin”, which is the author of the original 677 “Lada” project, took into account all the shortcomings of the main submarine and updated its technical aspects accordingly. It is alleged that Kronstadt will receive a new system of electric propulsion, a new complex for managing ship technical means, a new navigation equipment, etc.

Recall, the head submarine of the 677 project with the name "St. Petersburg" was launched in October 2004, and since then has been on trial. It was originally planned to transfer this submarine to the customer in 2006, but a number of technical problems led to several deadlines. As a result, the Ministry of Defense agreed to accept the diesel-electric submarines B-585, but only for trial operation. Almost all the problems identified by the submarine "St. Petersburg" related to the imperfection of its power plant. Thus, the main engine was able to achieve only two-thirds of the estimated power, and the actual autonomy was about half the required one. Because of these shortcomings, they decided to use the submarine as a platform for developing new technologies and equipment.

An interesting fact is that in the official report of the shipyard the submarines of the 677 project are called “non-nuclear submarines”. From this it is possible to make some assumptions about the essence of the innovations, which may be applied on the new submarine Kronstadt. One of the main recent trends in the construction of submarines is the creation of so-called. air independent power plants. Such systems, regardless of the specific scheme used, provide the submarine with the opportunity to stay under water for a relatively long time and thereby increase its survivability and combat potential. Submarines with air-independent power plants are often allocated to a separate class of non-nuclear submarines (NNS). 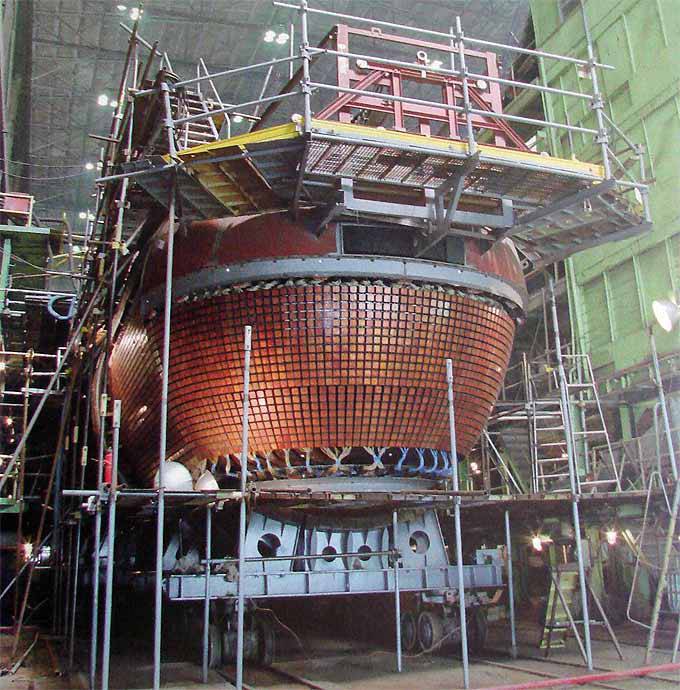 So far, there are no official data on the use of a radically new power plant on the Kronstadt submarine, which does not require frequent ascent to the surface. Recently, however, the topic of creating a domestic air-independent power plant (VNEU) with an enviable regularity is raised by officials and discussed by the public concerned. For example, in the context of the further fate of the St. Petersburg submarine, its use as a stand for developing technologies related to the VNEU or even a prototype of such a system was repeatedly mentioned. But, according to available data, the head “Lada” still has the same basic equipment as at the time of completion of construction.

Thus, some reports and conjectures suggest that Kronstadt may be equipped with at least VNEU elements. In this case, even with the most unfavorable developments, the Russian Navy will receive a submarine with a new power plant for our shipbuilding. A submarine equipped with VNEU will receive a number of advantages over existing diesel-electric submarines. First of all, this is the possibility of a long stay in the underwater position. This will significantly reduce the likelihood of detecting an anti-submarine submarine aviation or enemy ships. Another advantage of the boat with VNEU, which will allow it in some ways to compete even with nuclear submarines, are its relatively small size and lower noise. Thus, the detection of NAPL is much more complicated. 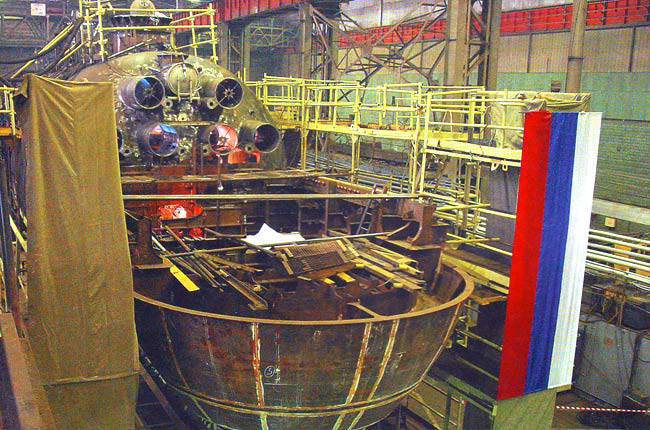 Substation B-586 "Kronstadt" in the workshop of the FSUE "Admiralty Shipyards", St. Petersburg, 10 in November 2006 (photo from the archive havron, http://forums.airbase.ru) 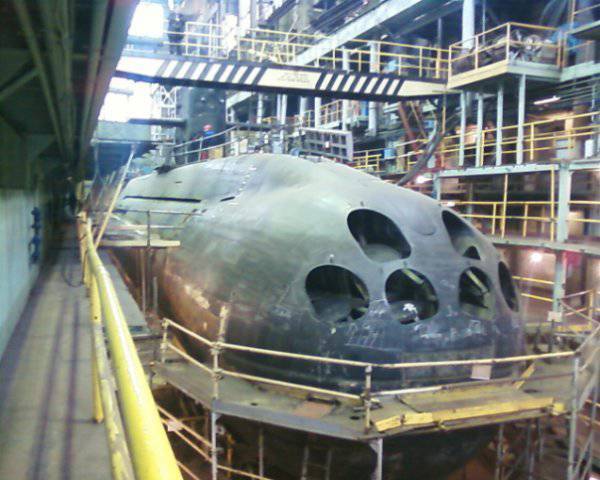 According to a number of sources, the 677 "Lada" project initially had to have an air-independent power plant in its composition. However, in the first half of the nineties, due to the difficult economic situation in the country, promising systems had to be removed from the new submarines. The head submarine "St. Petersburg" was built precisely in accordance with the finalized and "trimmed" project 677. In this case, it turns out that, at present, the employees of the TsDB MT Rubin return Ladas that they took from them twenty years ago.

Currently, the development of a full-fledged VNEU for new domestic non-nuclear submarines continues. We don’t have to talk about the details of this project: all information about it is limited to only a few short messages. It is known that the new power plant should be ready for 2016 year. Thus, it is likely that the third submarine of the 677 project may receive a promising VTU.

Unfortunately, the full official information on the details of the 677 project update has not yet become public knowledge. However, the available fragmentary information about the future of the Lada submarines makes it possible to hope not only to continue their construction, but also to master new technologies. In the future, these technologies will improve not only the "St. Petersburg", "Kronstadt" or other diesel and non-nuclear submarines, but also the following projects of submarines for the Russian navy.

Ctrl Enter
Noticed oshЫbku Highlight text and press. Ctrl + Enter
We are
"Svetlana". History of creationSuch a long-awaited "Lada"
36 comments
Information
Dear reader, to leave comments on the publication, you must to register.