July 25 2013
13
Regardless of the presence of a wearable infantry weaponsThe most valuable weapon used by the U.S. airborne forces during World War II was the Ml 57mm anti-tank gun towed by a jeep. In fact, this gun was a British 6-pound gun, manufactured in the United States. After the war, they formulated requirements for a mobile self-propelled anti-tank gun, which could be parachuted in the initial stages of an army landing operation and having firepower as tank a gun. Two samples of such a machine, under the designation T101, were built by Cadillac Motor Car Division, from General Motors Corporation. As a result of further development, an improved T10EI was obtained, which was standardized as a "self-propelled 90-mm anti-tank gun M56", also referred to as "Scorpion" (Scorpio). “Cadillac Motor Car Division” produced cars in 1953-1959. In 1953, these machines entered military trials. M56 in the US Army entered the arsenal of only the 1955nd and 82st airborne divisions, but in 101 these self-propelled guns were replaced with the M1960 Sheridan light tank. A small number of M551 delivered to Morocco and Spain, few were used by the American army in Vietnam, where they were used for fire support. 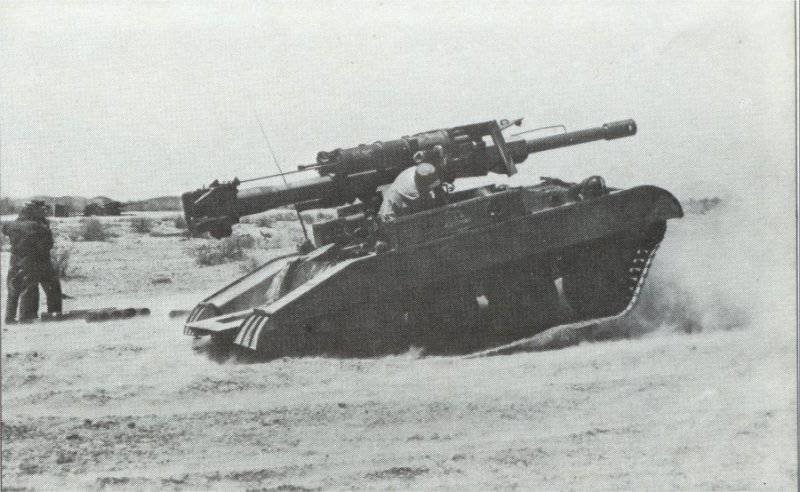 When creating to save weight in the manufacture of the hull used aluminum, and also abandoned the tower, instead of which to protect the gun used a small shield. The body is a fully riveted and welded construction. The hull is divided into two sections - located in front of the power section and the fighting compartment (middle part) and the control section in the aft part of the hull. In fact, when creating the M56 Scorpion, the developers took advantage of the unarmored chassis of the M76 floating cargo conveyor, which had four running wheels on each side and a torsion bar suspension. The gun was installed on a small carriage on top. In the case there was only the place of the engine day, the control levers and the driver, so the gunner's place was placed outside. Two more crew members were housed in a trailer with ammunition. The weight of the Scorpion was 7500 kg. The main units and components are sealed, the wiring is made waterproof.

The main drawback of the car was the complete absence of body armor for the crew, with the exception of a small gun shield. The driver's seat was to the left of the gun, the shooter was placed behind him, equipped with a sight having an increase of x4,1 or x8. For night driving, the M56 Scorpion used night-vision binoculars, worn on a driver's helmet. The commander was sitting on the box with the radio, located to the right of the driver's seat. The other two crew members were located near the tailgate on the starboard side. 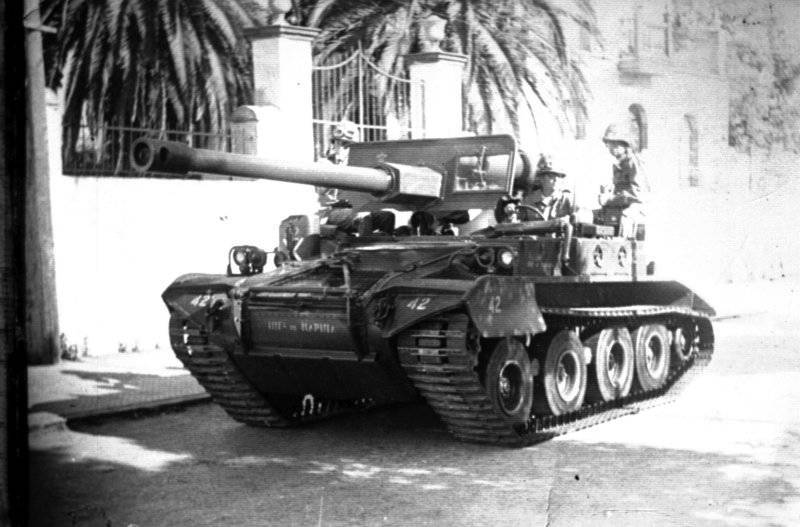 The main weapon is the M90 54-mm anti-tank cannon, which is placed openly on a thumbnail unit in the fighting compartment. The barrel of the gun is a monoblock with a screwed breech, a gun shield and a single-section muzzle brake. Valve wedge, vertical, semi-automatic. On the breech of the gun top mounted a pair of cylinders of hydraulic recoil devices. The ballistic data corresponded to the gun gun MNNX. The range of real fire was 48 meters.

Guidance mechanisms have manual drives, manual loading. The angles of vertical guidance ranged from + 15 to -10 degrees, and the angle of horizontal guidance was 60 degrees. When firing direct fire, an optical sight, having a variable magnification, was used, from closed positions - corresponding sights. 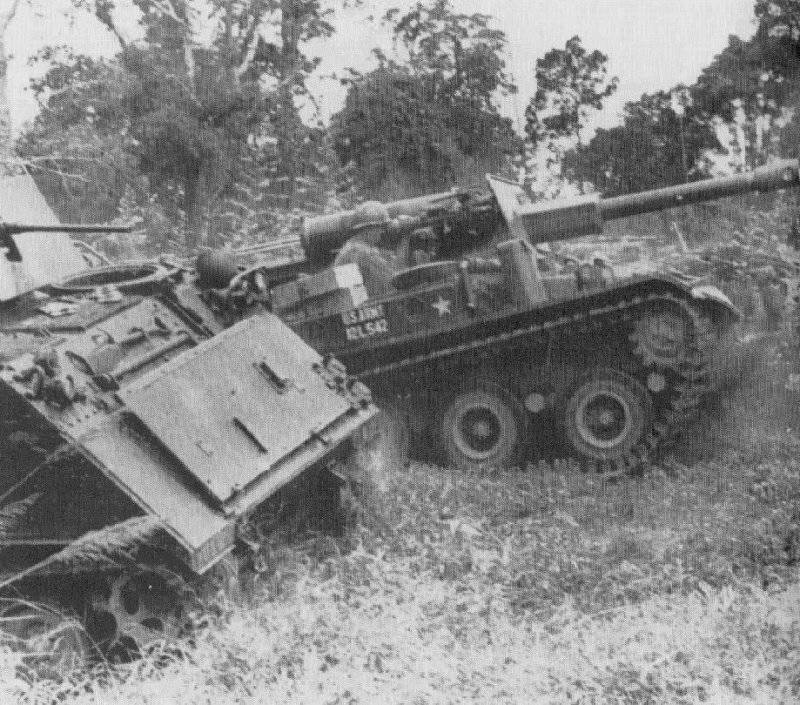 The M56 ACS had a much greater firepower, compared to the M41 light tank with its 76-mm gun, and the chassis too light. Therefore, after firing a 90 millimeter cannon, the car bounced back a few feet, and the target was no longer visible due to a cloud of dust raised by a muzzle flash. 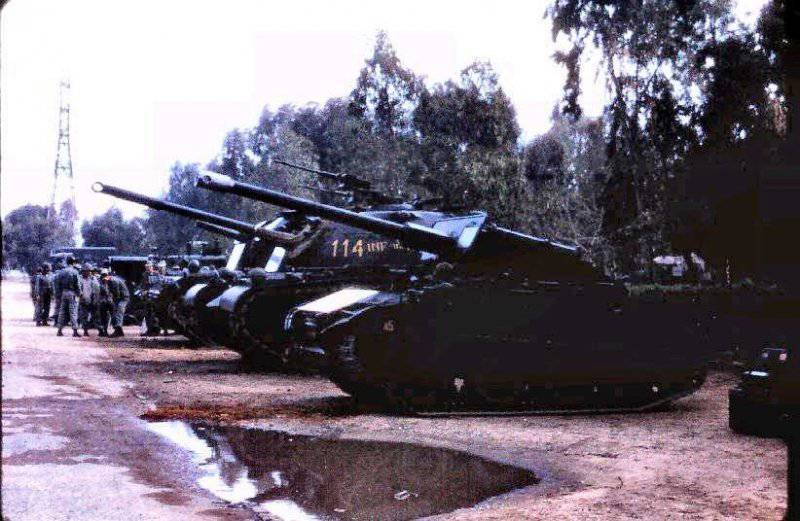 The engine was connected to a transmission of General Motors Corporation with two forward and one reverse speeds. Turning was carried out with the help of onboard gears. Chassis with four rollers with torsion bar suspension, rubber tires, front driving and rear - guide wheels, there were no supporting rollers. The caterpillar is an endless steel-reinforced rubber band.

In the undercarriage used rubber tracks with metal fittings in the form of transverse slats and steel cables. Track rollers equipped with tubeless pneumatic self-gluing tires. For the suspension of each rink served as a double torsion of small length, which was carried out in the form of a pipe with a rod placed in it. In addition, hydraulic telescopic shock absorbers were used in the suspension. Such a running gear was noiseless, lightweight and provided low specific pressure on the ground, which made it possible to overcome the muddy, sandy, swampy and snowy ground.

In May 1959, the production of M56 Scorpion was turned down, and it was decided to install an 106-mm recoilless gun on its chassis. In addition, the tracked base of the M56 Scorpion self-propelled self-propelled gun was supposed to be used as a multipurpose chassis for a floating armored personnel carrier, 106-mm and 81-mm mortars, quad-mounted anti-aircraft machine guns of 12,7 mm and ATGM launchers.

The M56 in the 1960s was used in the Vietnam War, where it was used as an artillery system for firing from prepared positions. 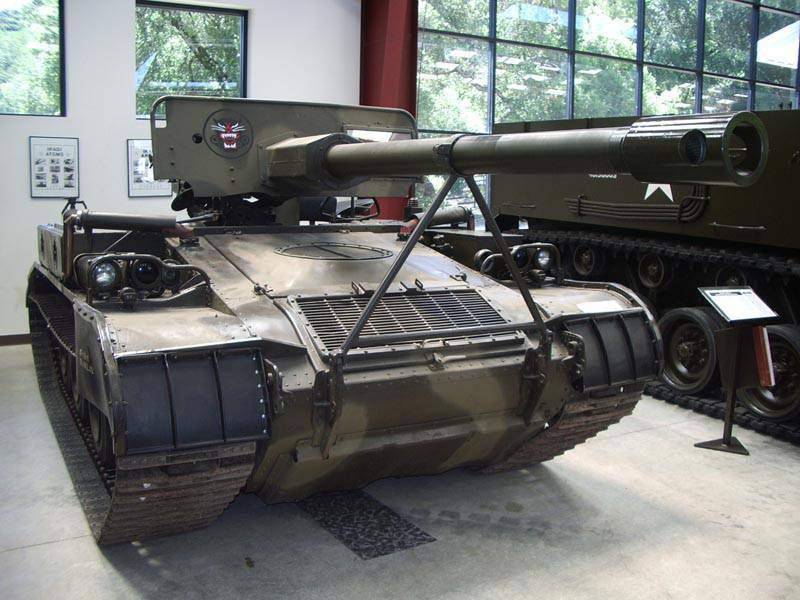 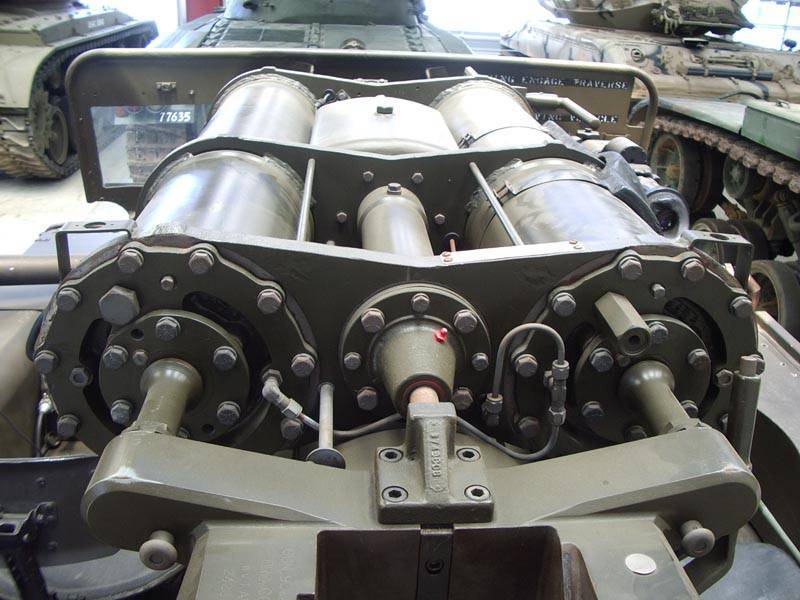 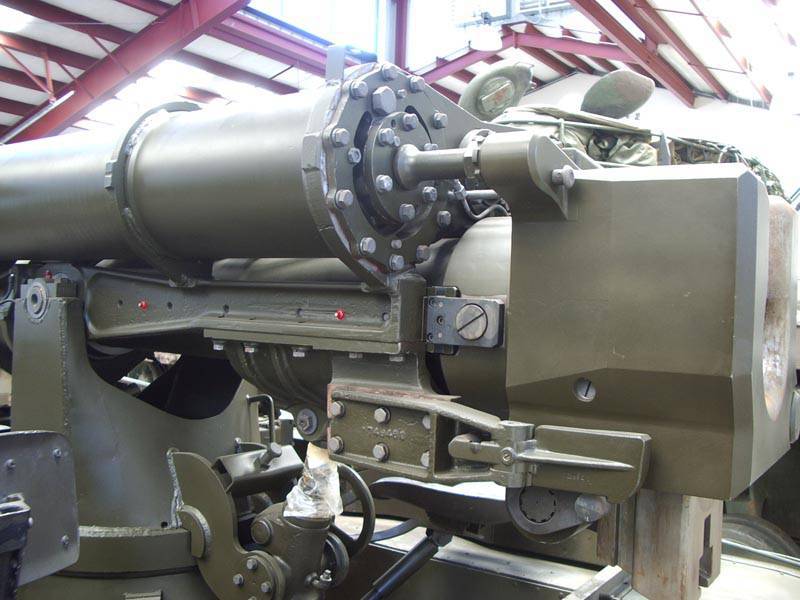 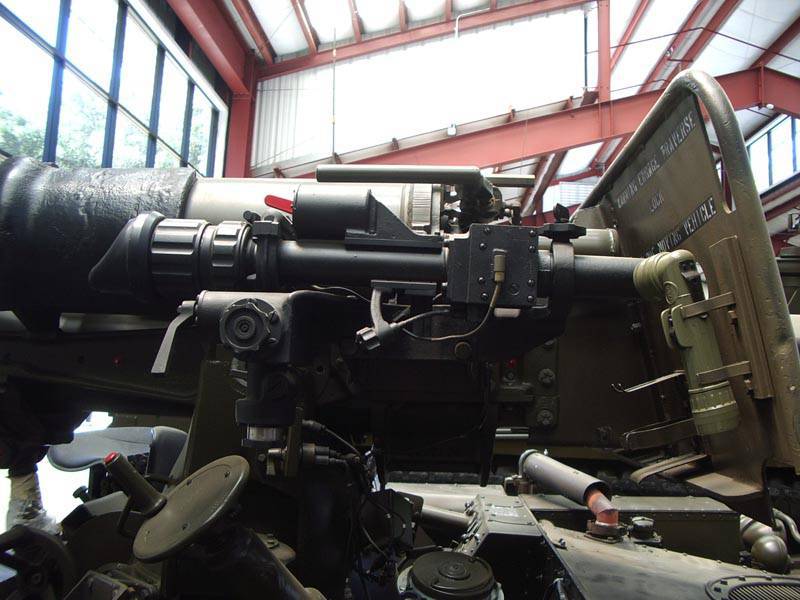 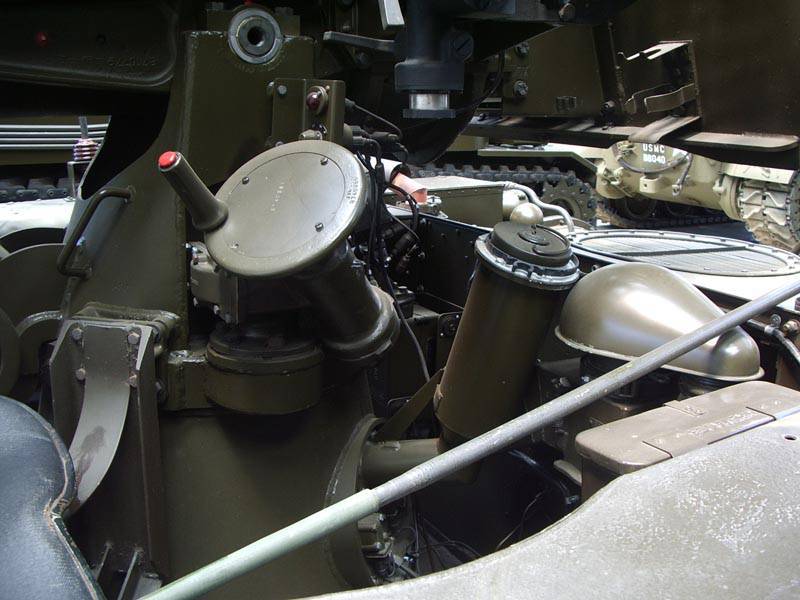 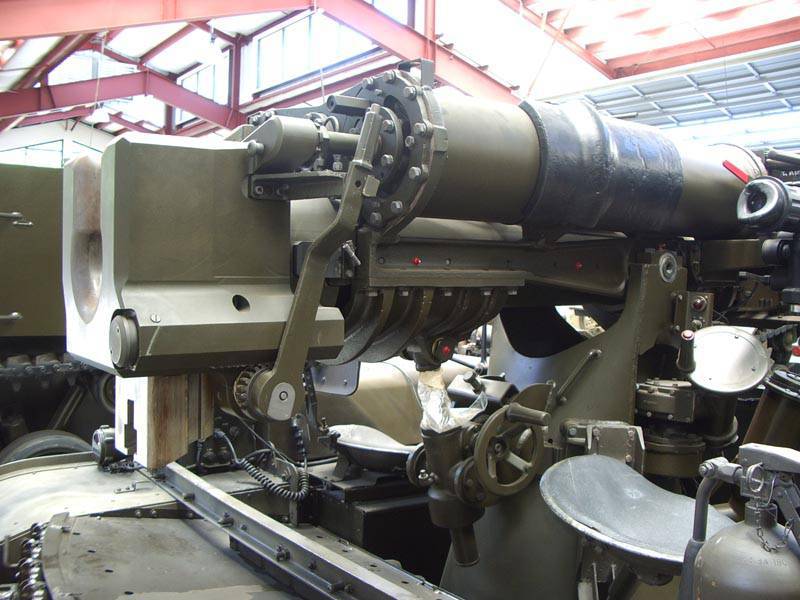 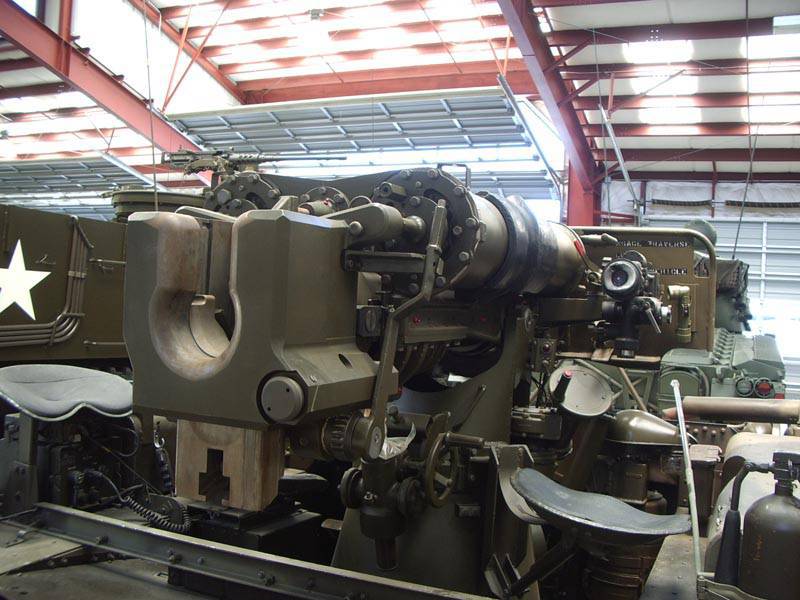 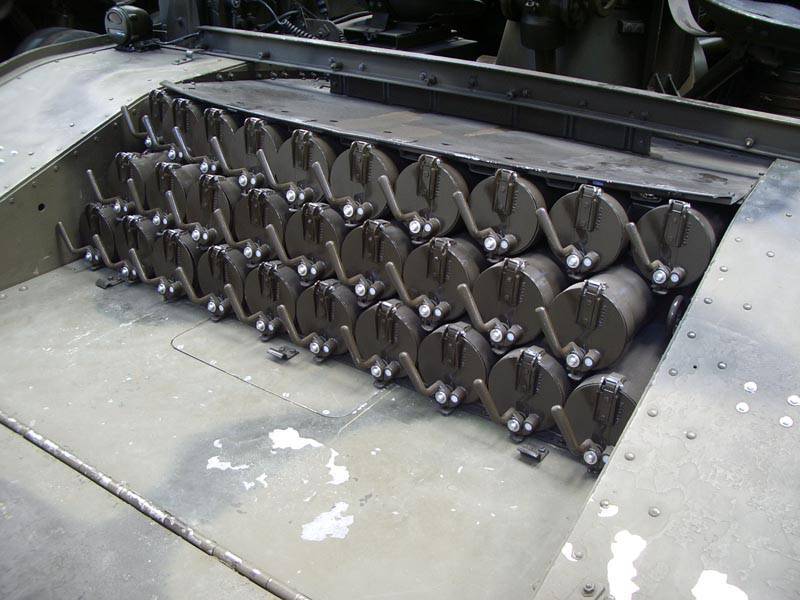 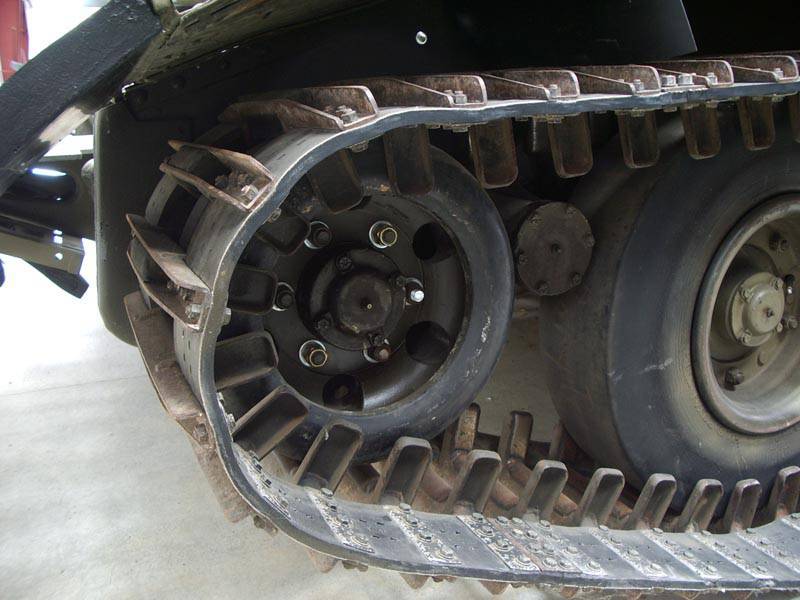 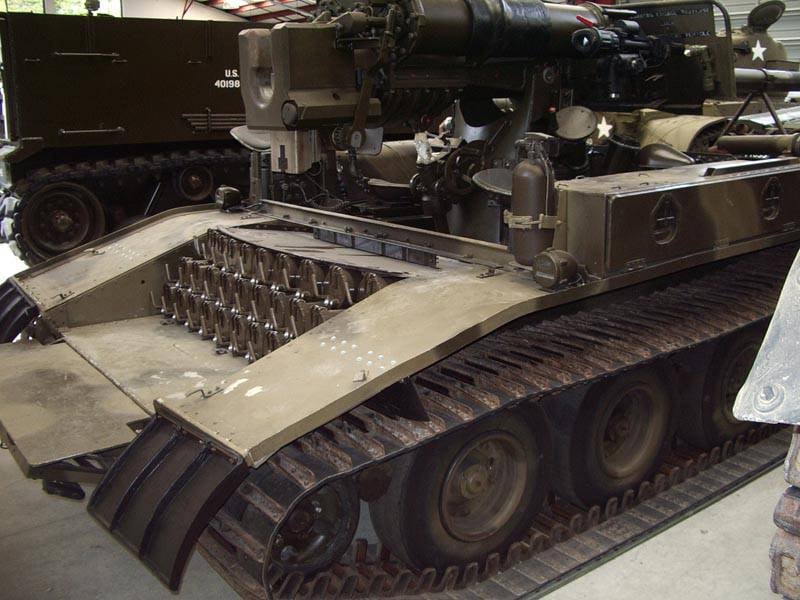 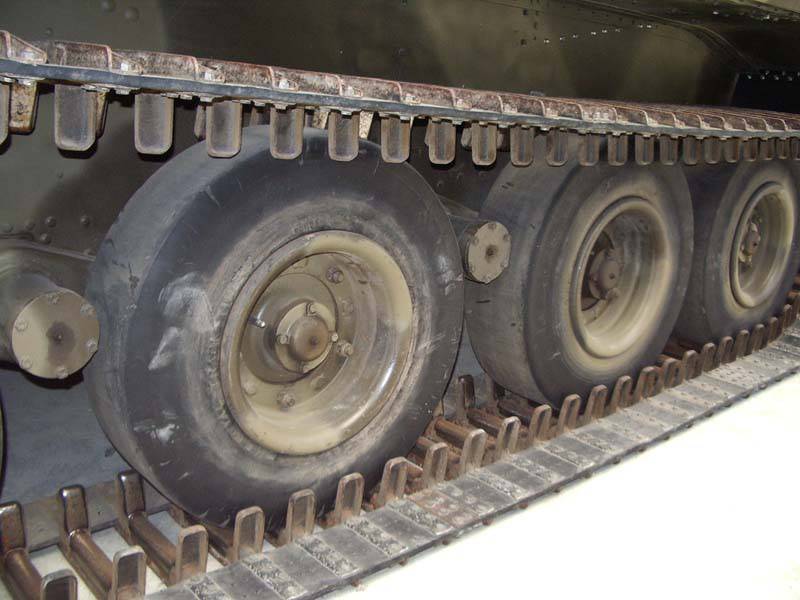 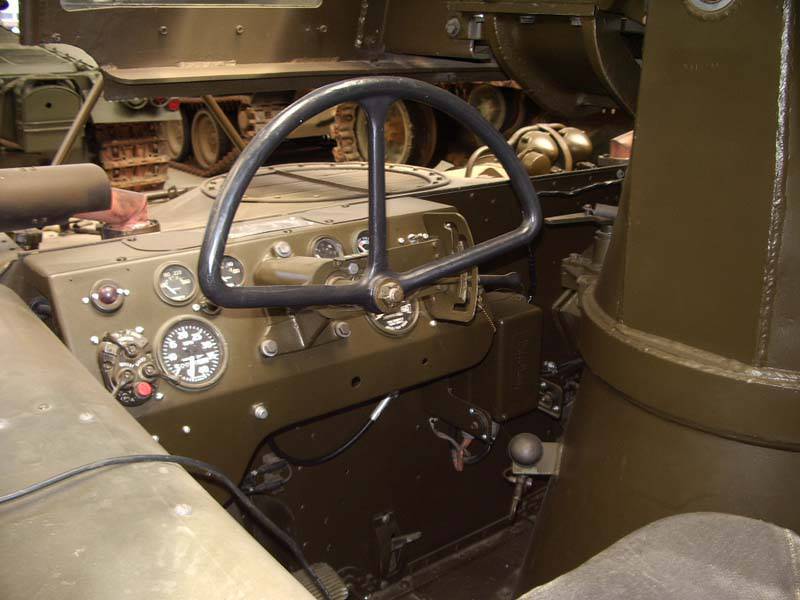 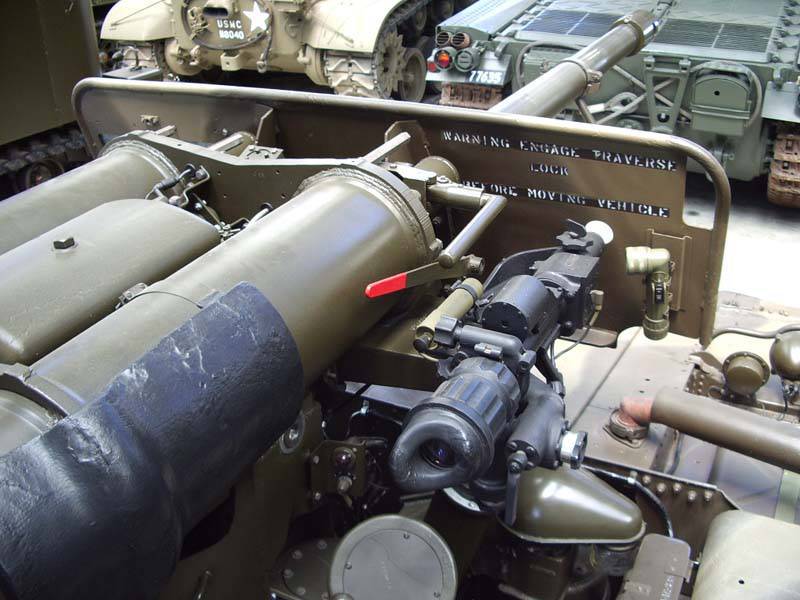 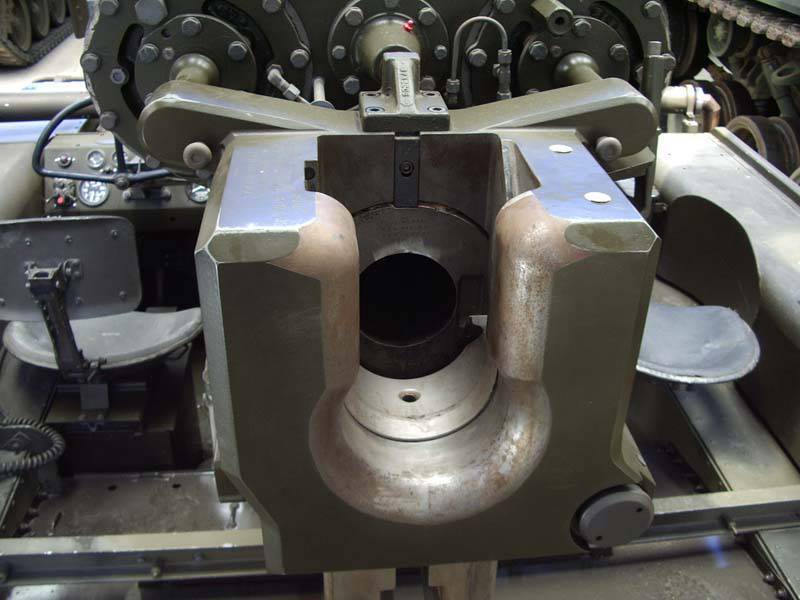 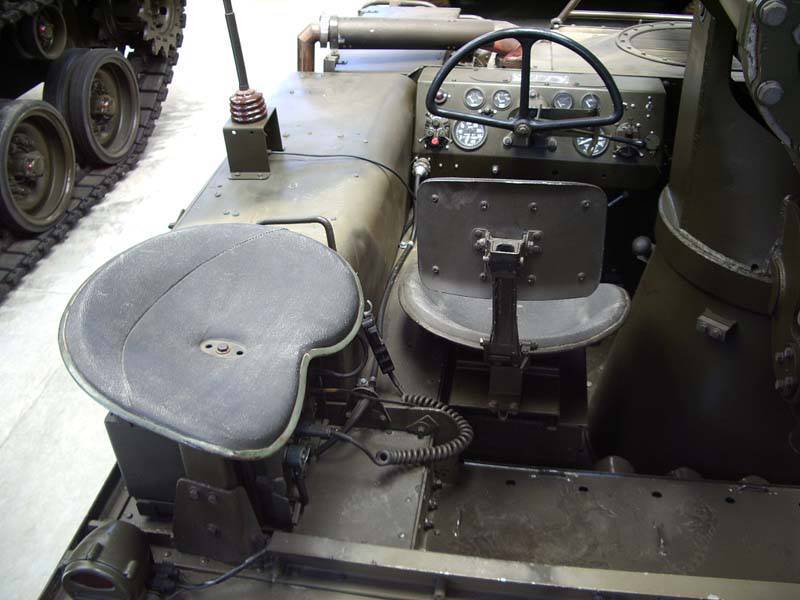 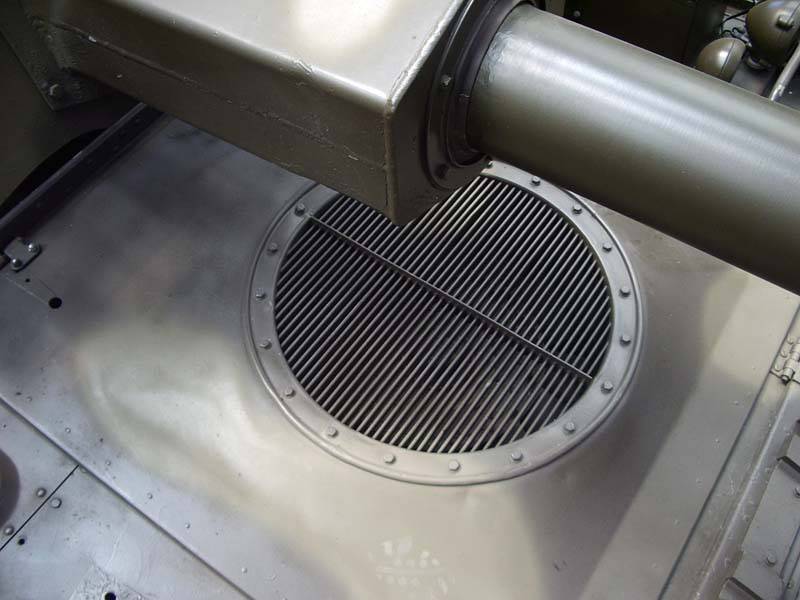 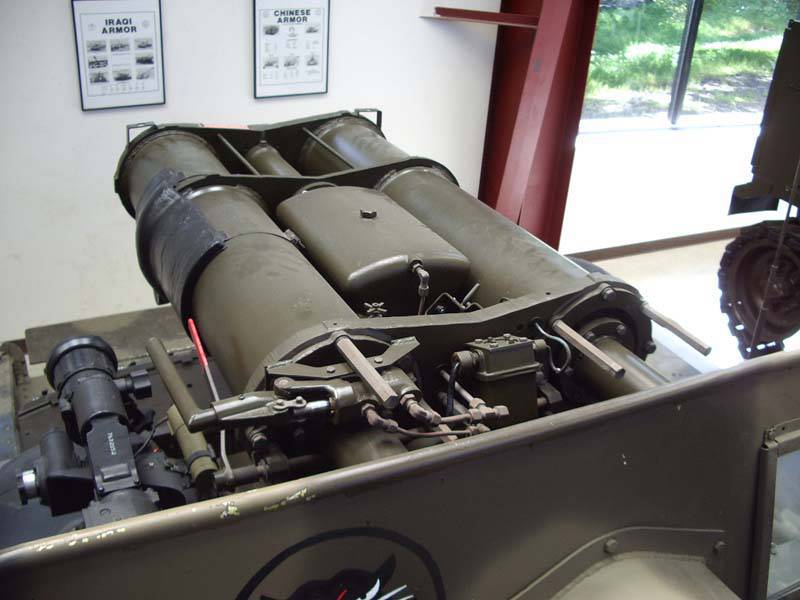 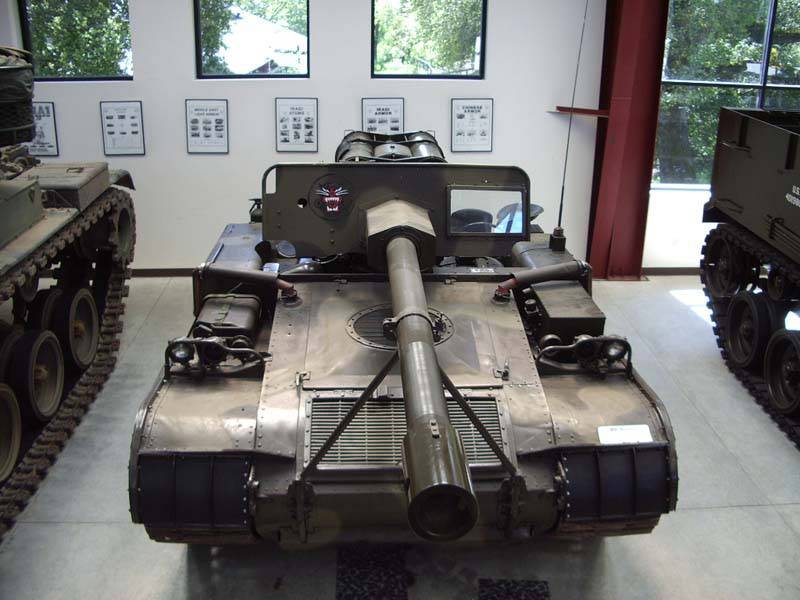