The best rifles of the twentieth century 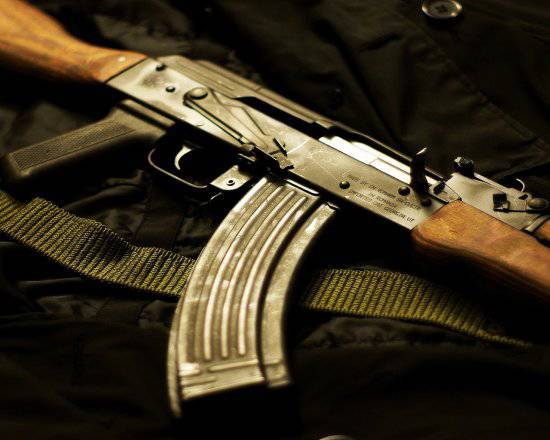 The American Channel Military Channel ranked the best samples of small weaponscreated in the twentieth century. Each model was evaluated by military experts on the accuracy of fire, combat effectiveness, originality of design, ease of use and reliability. First place went to the legendary AK-47, which received the maximum points in the 4-x categories of 5-ti.

In World War II, each infantry platoon of the American army used as many as four types of small arms with different types of ammunition. It was not very convenient, so the army authorities decided to develop a new universal rifle, capable of performing all the necessary functions at once. As a result, the M14 appeared, using a standard 7,62 mm caliber cartridge. Large-scale combat trials rifle was held in Vietnam. Soldiers liked the shooting characteristics of the M14, but it was too heavy for the assault weapons, and the lighter M16 came to replace it. However, some fighters still prefer the classic version of the rifle, mainly as a sniper weapon.

At the end of World War II, Germany faced the overwhelming superiority of the Soviet army in automatic small arms. The main weapon of the German infantry, Mauser rifles with a longitudinally sliding rotary bolt, urgently needed a more rapid replacement. She was supposed to be the revolutionary carbine Sturmgewehr 44, which marked the beginning of an entirely new family of small arms - assault rifles. The key difference between the Sturmgewehr 44 and the similarly designed light machine guns was the use of a shortened 7,92-mm cartridge, transitional between the classic pistol and rifle ammunition. The machine gun appeared at the final stage of the war and did not have time to play any significant role in it. Be that as it may, he is rightly praised for the originality and innovative nature of the structure. 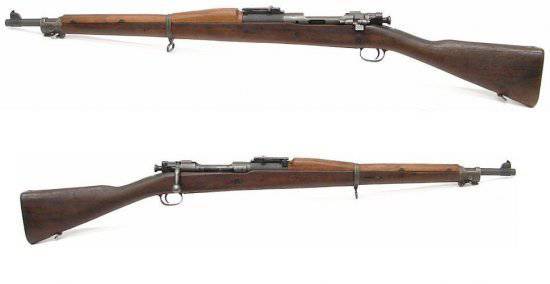 The numerous shortcomings of the Norwegian Krag-Jorgensen rifle, used by the Americans during the war with Spain, forced the US military authorities to think about creating their own, more successful infantry weapons. The gunsmiths used a sliding bolt, borrowed from the Mauser 7-mm rifle, made minor modifications to it and added a magazine for 5 cartridges to it. The result was a very successful design - the rifle has established itself as an extremely accurate, powerful and reliable weapon. 1903 Springfield was widely used during both world wars, and even traveled to Vietnam as a sniper rifle.

This automaton, which appeared back in 1977, has one very serious drawback - it looks too much like some blaster from another fantastic saga. According to many analysts, its futuristic look at one time frightened off many potential buyers. The developers of Steyr Aug used the Bull-Pup-type layout, in which the shutter and other details of the firing mechanism are carried inside the butt. This allowed to make the weapon compact and light. Among other interesting features of the rifle, mention should be made of a transparent plastic magazine, an integrated telescopic sight, and also the ability to throw the sleeves both to the right and to the left - at the request of the fighter.

Mauser 98 rifle, released at the end of the XIX century, absorbed the most promising achievements of the then arms industry. These include smokeless powder, clips with cartridges that can be simply inserted into the magazine, and finally, a longitudinal-sliding rotary bolt, still used in most hunting rifles. The weapon proved itself very well during the First World War, and in the 1930-ies, during the rearmament of the German army, the rifle was subjected to modifications, making it easier and more convenient to aim. Advanced Mauser K98k is one of the most legendary rifles of the twentieth century.

The gunners of the Belgian company Fabrique Nationale (FN), who created the FAL rifle, were clearly inspired by the German assault rifle Sturmgewehr 44. Initially, their weapons used almost the same shortened cartridges as the German model, but this ammunition did not meet NATO standards, so at some point it was converted to a longer and more powerful cartridge. It is in this form that FAL has become a classic weapon of the Cold War. More than 50 countries have adopted it - despite the low accuracy of automatic fire. FN FAL served the Australian forces in Vietnam, Israeli soldiers during the Six Day War, and was used by both sides during the Falkland Islands War.

The M1 Garand rifle, adopted by the Americans in 1936, showed itself well during World War II. In the mid-forties, General Patton called her the most effective weapon ever created by man. Of course, this is a great exaggeration, but there is no doubt that at that time M1 was the most successful, accurate and massive semi-automatic rifle. Its production was curtailed only at the beginning of the 1960-ies, and more than 6 million copies were produced.

Served as the main weapon of the British infantry during the First World War, this rifle remained in service until 1956. For non-automatic rifles, the Lee-Enfield SMLE had a phenomenal rate of fire, which was due to the extremely successful design of the bolt and also a large magazine capable of holding 10 cartridges (this the Lee-Enfield indicator SMLE was in the lead throughout the first half of the twentieth century). A trained shooter could have fired shots per minute from it before the 30, striking a target that was removed at 200. Such demonstrations were called "crazy minutes." It should be noted that the fire density achieved with the help of Lee-Enfield is comparable to that of modern semi-automatic rifles.

The M16 appeared as a modern alternative to the semi-automatic rifle M1, as well as its analogue M14. During the Vietnam War, a new rifle found a very unpleasant tendency to jam, but a small refinement made it somewhat more reliable. Since then, M16 has managed to establish itself as a very accurate, convenient, durable and effective weapon. The number of unconditional innovations, which went to the designers of this rifle, should include the use of lightweight alloy and plastic parts. In addition, the rifle uses lighter 5,56 mm cartridges (instead of the 7.62 mm in the M1 and the M14). All this made it possible to approximately double the amount of ammunition that every soldier is capable of carrying. 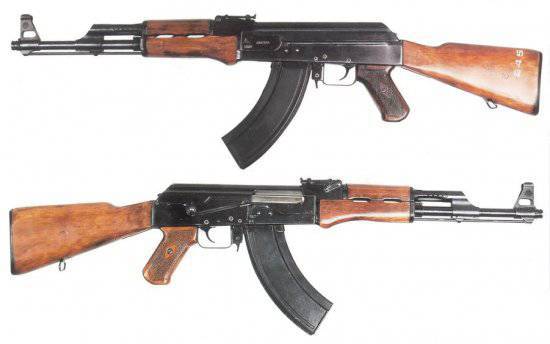 According to experts, to date, more than 75 million Kalashnikov assault rifles (AK-47 and AKM) have been released in the world. This weapon, created back in 1947, is still in service with dozens of armies in the world. Argued that the Kalashnikov assault rifle is based on the German Sturmgewehr 44 assault rifle. There is indeed an obvious resemblance between them, but in their design they differ very, very much. AK-47 consists mainly of extruded components, which makes it extremely easy to manufacture and cheap device. In this case, the machine has an amazing reliability - it can easily withstand the harshest operating conditions that can destroy any other rifles. Accuracy of AK-47 shooting is estimated as average, however this disadvantage is fully compensated by high firepower, low weight, reliability and ease of use.