July 19 2013
189
Recently it became known that the “Military Industrial Company” has created and tested a new armored vehicle. The experimental wheeled chassis, created as part of the Krymsk research project, is significantly different from all the armored vehicles currently used on wheels. The fact is that the experimental machine is equipped with a hybrid power plant and an electric transmission, which, as expected, can give noticeable advantages when used in practice. 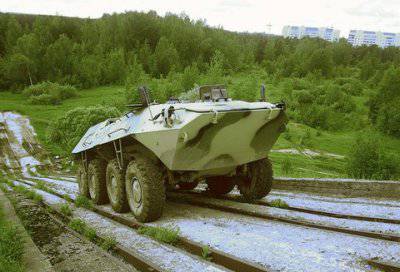 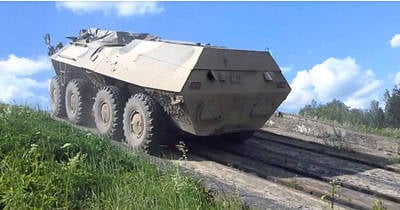 Information Agency "Rosinformbyuro" quoted the head of the project "Krymsk" V. Rudin. According to the published data, the experimental chassis is built on the basis of the hull and undercarriage of the BTR-90 “Rostok” armored personnel carrier, but it is equipped with the original powerplant and transmission. These units are made according to the “sequential hybrid” scheme. The basis of the experimental machine's power plant is the YMZ-650.10 diesel engine, produced at the Avtodiesel engine plant in Yaroslavl. Engine power for technical reasons is limited to HP 360. The torque of the diesel engine is transmitted to the traction valve inductor generator. The latter has a number of interesting features. In particular, it is equipped with a so-called. field winding, which allows to optimize the coordination of the diesel engine and generator. In addition, the generator can be used as an electric motor to start the diesel. Finally, the power plant includes a power storage unit, which incorporates electrochemical capacitors manufactured by Elton OJSC.

The electrotransmission of the experimental machine is made according to the motor-semi-axis scheme. It includes a distributed control system, made with extensive use of microprocessors, power converters of electric power, as well as eight traction electric motors. LLC NPF “Vector”, LLC NPP “Cycle +” and GOU VPO “MEI (TU)” participated in the development and production of electrical transmission units.

The microprocessor control system of the electric transmission carries out direct torque control and is therefore capable of implementing a number of active safety functions at the software level, such as ABS, ABS, cruise control, redistribution of the torque between the wheels depending on the road conditions, etc. On the chassis "Krymsk" used traction valve inductor motors with excitation winding. Planetary gears are built in engines. Allegedly, such electric motors, in combination with a control system, are capable of displaying characteristics at the level of serial excitation collector motors, considered the most convenient for use as traction motors.

The power plant and propulsion pilot chassis are as follows. The diesel engine rotates the alternator rotor, which generates alternating current. Next, the alternating current is converted to direct current, after which it is sent to the drive and to the power converters. The latter, as appropriate, change the characteristics of the current and feed it to the traction motors. The drive is used to optimize the operation of electric transmission in transient conditions. So, during acceleration, it should “help” the main diesel generator system and supply additional power to the converters. When braking, in turn, braking energy is converted into electrical energy and accumulates in batteries. Drives, allegedly, can accumulate and instantly give large amounts of electricity. In the future, this will allow new sophisticated electronic systems to be installed on such chassis; weaponrequiring high energy costs.

The applied system “serial hybrid” with a propulsion of the “motor semi-axis” type allowed the experimental chassis to show fairly high performance. The general results of the running tests are described as follows: having about one and a half times less powerful engine in comparison with the BTR-90, the Krymsk chassis showed higher driving characteristics. So, during tests at the airfield in Kubinka, a car weighing about 22 tons accelerated to a speed of 97 kilometers per hour, and it took just 80 seconds to accelerate to 33 km / h. Also, the chassis with a hybrid power plant and electric transmission was able to overcome a two-meter-wide ditch, a half-meter wall and a rise in 30 °. In addition, during the tests, the experimental vehicle towed the BTR-80 armored personnel carrier at a speed of the order of 48 km / h, and also managed to drag such a load to the slope with a slope of 15 °. The Krymsk chassis fuel tanks are no different from the BTR-90 tanks, but at the same time it is able to travel up to 940 kilometers at one gas station, moving at the usual 40 km / h speed for the columns. Turning radius on dry concrete, thanks to the use of the electric transmission control system, was able to bring to the 3,8 meter.

At the moment, the Krymsk chassis is a purely experimental machine built to test a number of new technological solutions. For this reason, you should not hope that in the very near future such equipment will appear in service with our army. However, in the long term, armored vehicles with a hybrid power plant and electric transmission can still reach mass production and practical use. The existing high performance and characteristics achieved during the tests can interest a potential customer on behalf of the military department. However, full-scale development of all necessary technologies will require investing a lot of time and money. In this regard, it is likely that the Krymsk project or new research in this direction in the near future will have only an experimental character.