July 18 2013
22
Perhaps, there is no better-known military vehicle in Russia than GAZ-66 or, in common people, “Shishiga” (“Sheshiga”). Although the car was designed in the distant sixties, its use is justified to this day. If we talk about the fleets of military units, in the overwhelming number of 66-GAZ there is, and in good condition, ready to perform certain tasks. 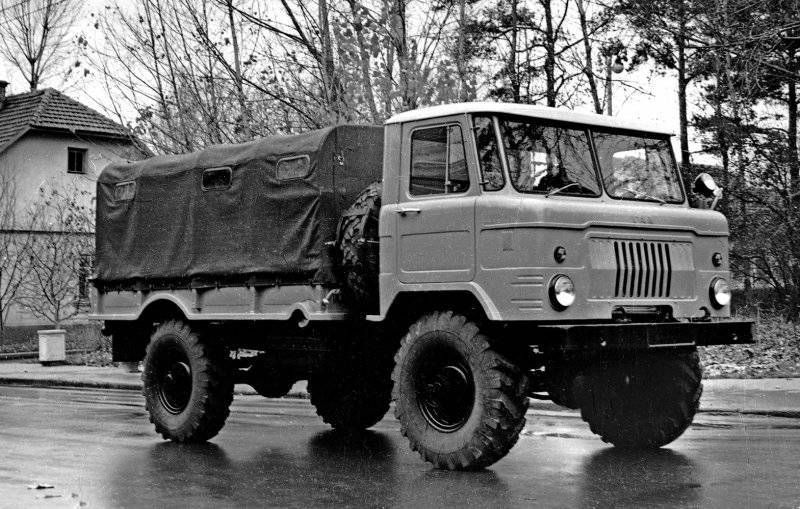 GAZ-66 in various modifications can be used as a vehicle for transporting personnel, as an ambulance vehicle, as a shift bus or as a vehicle designed for such a procedure as water well drilling. The car can be equipped with additional devices (winch, drilling rig, equipment for communication).

With the production of this workhorse of the Soviet and Russian armies was removed in 1999 year, but this does not prevent the use of "Shishigu" in the troops with a fair amount of intensity. Specifications of this car, which can be called one of the most successful design achievements, the following.

GAZ-66 carrying capacity is up to 4 tons. However, in reality, Soviet drivers transported on this “horse” and one and a half times more payload. The course at the same time was difficult, but the car withstood the load, often really saving the lives of wounded soldiers. 66-I wonderfully manifested itself on the mountain roads of Afghanistan, but it was discovered that it had a significant flaw in this country. The cab of the car was located directly above the front wheelset, which reduced the probability of crew survival to a minimum if the car drove on a mine. It was for this reason that GAZ-66 had to be withdrawn from Afghanistan, although individual units of this vehicle continued to serve there until the withdrawal of Soviet troops.

The car's power is 120 horses with a working volume of 4,25 engine l. Fuel consumption by today's standards can be considered large: at speeds up to 80 km / h, the engine eats 20 liters of fuel for every 100 km. However, in the attitude of the Soviet army to automobile fuel (approximately as water), nobody paid special attention to these consumption indicators.

Of all the amenities for the driver in the "Shishiga" was provided a hammock made of tarpaulin, which could be hung right in the cab.
Ctrl Enter
Noticed oshЫbku Highlight text and press. Ctrl + Enter
We are
Truck Opel Blitz: Wehrmacht workhorseGerman amphibious vehicles
22 comments
Information
Dear reader, to leave comments on the publication, you must to register.