Projects to increase the survivability of the main battle tank Chiftain

July 18 2013
17
By the beginning of the seventies it became clear that the main combat Tanks Chieftain in their current form will be able to remain leaders only with continuous improvement and improvement. The development of arms abroad, primarily in the Soviet Union, required the creation of new armored vehicles and modernization of the old. In the search for new ideas and design solutions, several private and state organizations were involved that were most directly related to tank building. As a result of long scientific and design work, several projects appeared to increase the survivability of Chiftain's MBT on the battlefield. Moreover, it was proposed to improve this parameter in various ways. 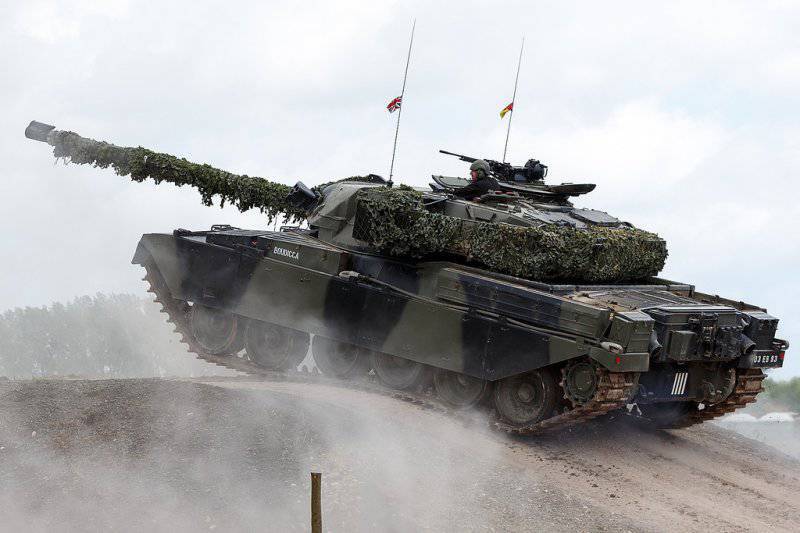 The most obvious ways to improve the ability of the tank to perform tasks and oppose the enemy’s armored machinery were the improvement of its weapons and equipment, as well as the improvement of body armor. Despite all the efforts, it was not possible to achieve a dramatic increase in the performance of 120-mm guns. The electronics, in turn, were updated regularly during each new upgrade. Thus, it remained to work out the issue of strengthening the armor.

In the sixties and seventies, several British scientific and design organizations worked on a project codenamed Burlington. The purpose of this project was to create a combined armor that protects against the maximum possible number of modern and promising weapons. The new development has attracted the attention of engineers who worked on the improvement of the "Chieftain", as a result of which a tank modernization project called the Mk.5 / 2 (FV4211) appeared. It was assumed that in accordance with this project it will be possible to build both new tanks and modernize old ones. 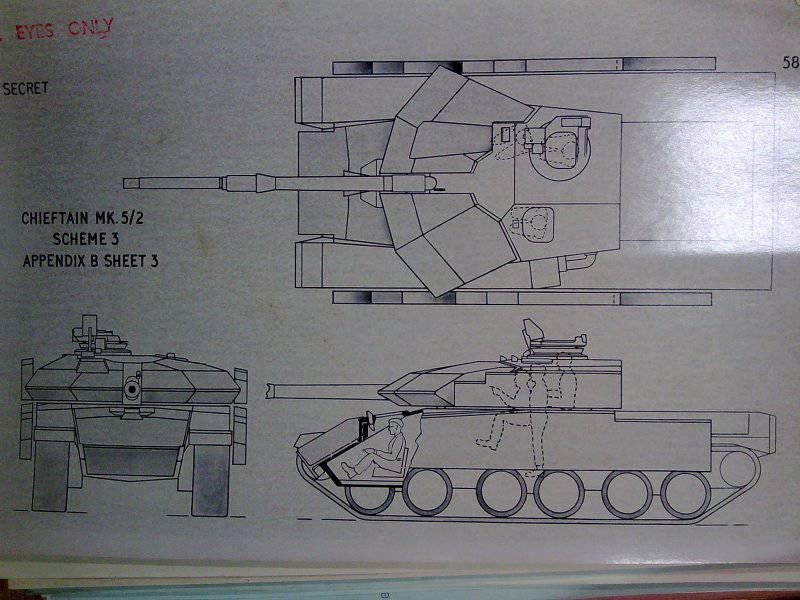 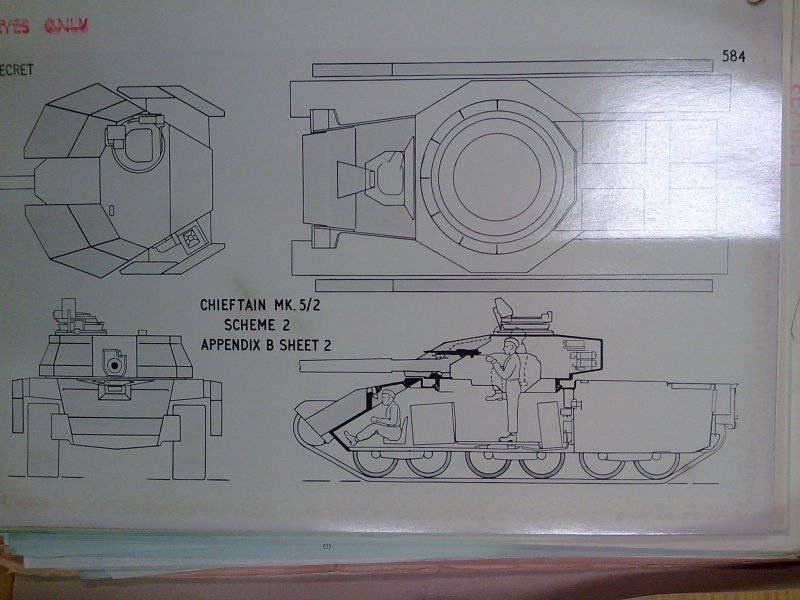 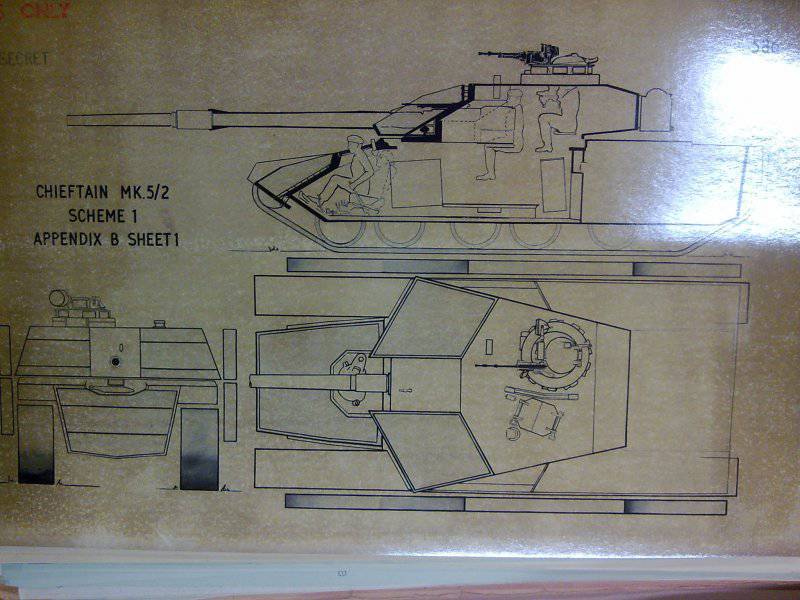 The main idea of ​​the Chieftain Mk.5 / 2 project was to equip the combat vehicle with several additional booking modules. With this approach, it was possible to significantly increase the level of protection of the tank and ensure the possibility of upgrading the machine in the conditions of military workshops. However, the first calculations showed that the combined armor "Burlington" in its present form is unsuitable for upgrading Chieftain tanks. When using it, the combat weight of the tank increased so much that it was also required to use a more powerful engine. For this reason, I had to look for new ideas.

In the original Burlington armor, rejected by the developers of the FV4211 project, fairly heavy steel plates were used. Aluminum has been proposed as a substitute for steel. When using this metal, the level of protection of the additional booking modules decreased markedly. At the same time, the mass of the whole structure decreased. As a result of analyzing the ratio of weight loss and protection level, British tank builders concluded that the use of the Burlington armor variant with aluminum sheets was suitable.

Thus, several modules should be placed on the tank, consisting of an aluminum or steel hull and containing several aluminum plates inside. Such blocks were supposed to be installed on the frontal part of the hull and on the front of the tower. In addition, at a certain stage of the project, there was a proposal to equip the hull with the long and narrow modules. In this configuration, according to calculations, the level of protection should have increased in all directions, except for the stern. 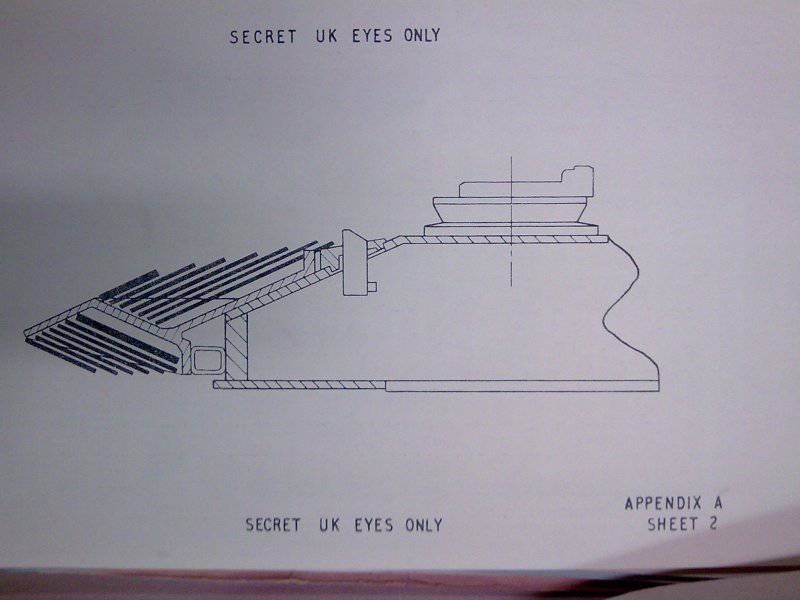 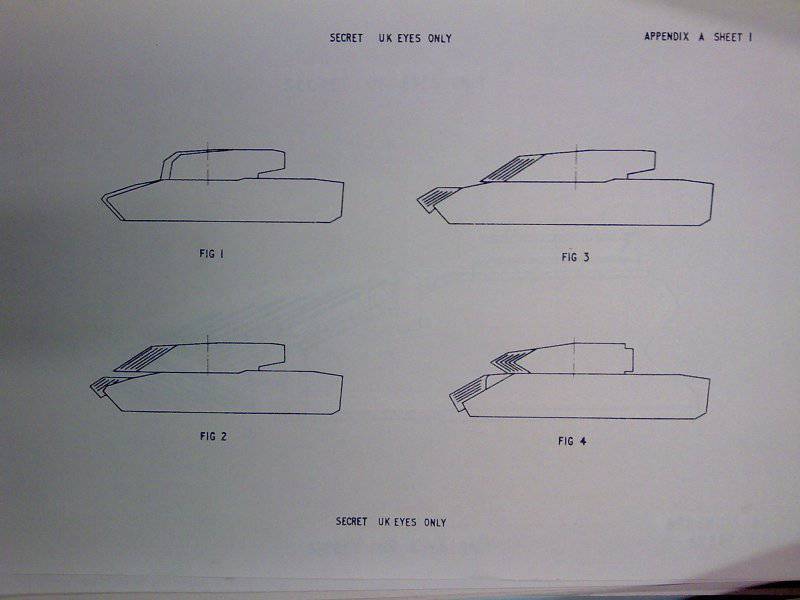 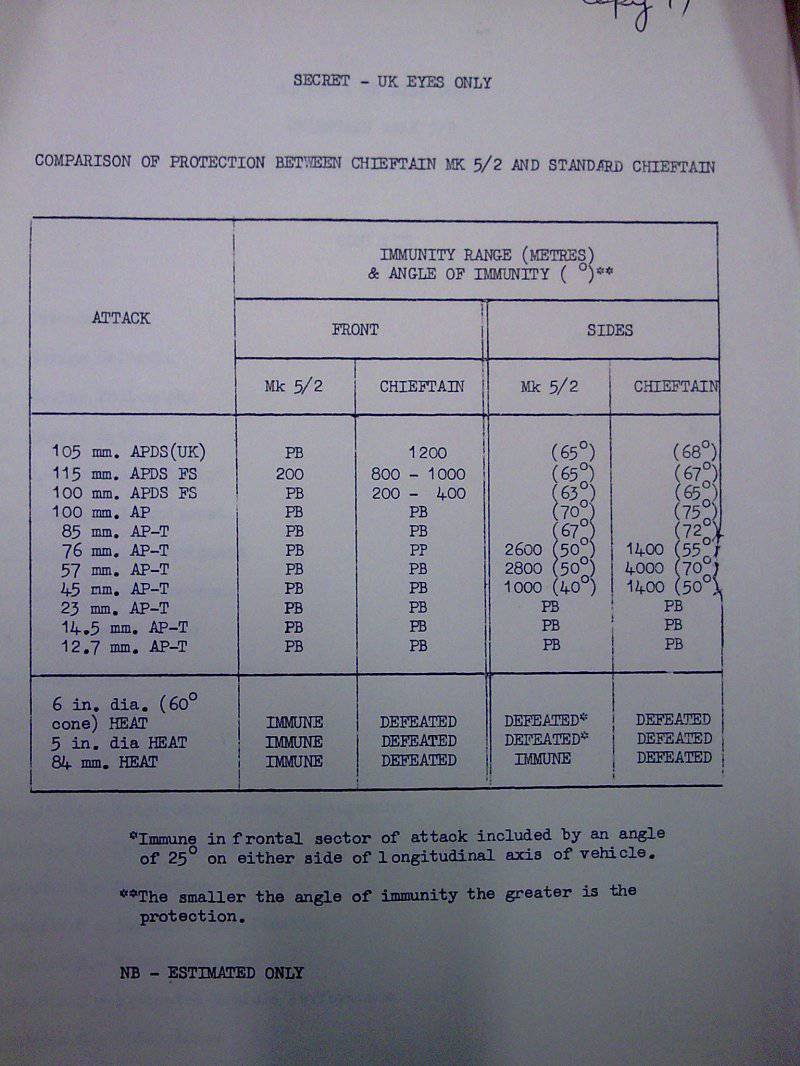 An alternative option for the placement of additional modules was also considered, which was less complex in manufacturing and installation. In accordance with it, it was proposed to use four flat modules of a relatively simple form and one wedge-shaped. The latter was supposed to be mounted on the forehead of the hull, while four others were intended for installation on the sides of the hull and the tower, with the flat tower modules having to be attached at a distance from the armor using a system of beams. This option of placing additional booking modules increased the resistance of the combat vehicle to attacks from the side and front. However, the additionally unprotected tower caused disputes. In the end, such an option for the placement of additional modules was abandoned. 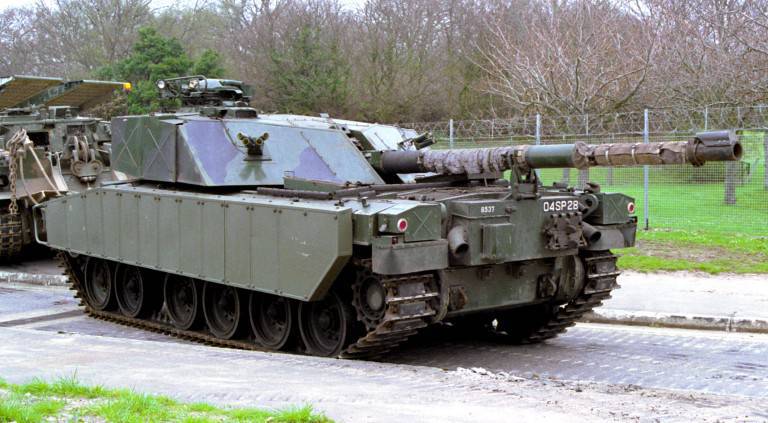 During the study of the configuration of additional modules of the combined Burlington armor, a total of about a dozen options for their placement were considered. Some of the options were abandoned almost immediately, while others lasted almost to the very end of the project. It is also worth noting that the built prototypes of the tank Chieftain Mk.5 / 2 were equipped with different modules to test different configurations. In total, nine serial tanks of the Mk.5 model were converted into this version. Exact data on their tests are not available, but from the fragmentary information available we can draw some conclusions. Obviously, the British tank builders confirmed the fundamental possibility of using additional armored modules. At the same time, they were unable to find the optimal ratio of the level of protection, weight and cost of the modules.

Approximately in the mid-seventies, the “Chieftain” project Mk.5 / 2 was closed, and the obtained developments were used a little later. In the second half of the decade, the United Kingdom commissioned Iran to create the Shir-2 MBT, in the design of which the combined armor was widely used. On the new export tank it was proposed to use the built-in armor of the Chobham type, which was a further development of the ideas and developments of the Burlington project.

After the FV4211 project, the British launched a new research program, the aim of which was also to increase the survivability of the tank on the battlefield. However, this time it was proposed to improve the capabilities of the combat vehicle not by using weapons, electronics or reservations, but by reducing its visibility. In the late seventies, the leading countries of the world became interested in the so-called stealth technology, which allowed them to reduce the visibility of technology in one or another range. This “fashion” did not bypass the British tank builders. So there was a project Chieftain SID (Signature Integration Demonstrator). 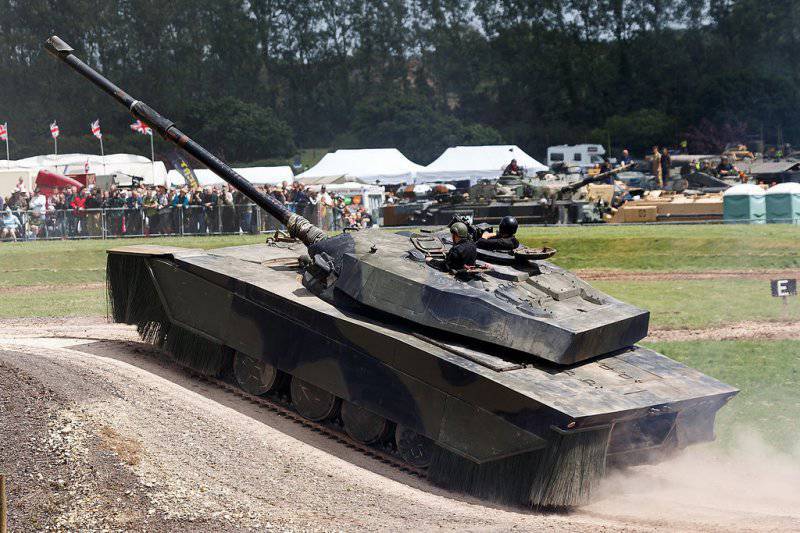 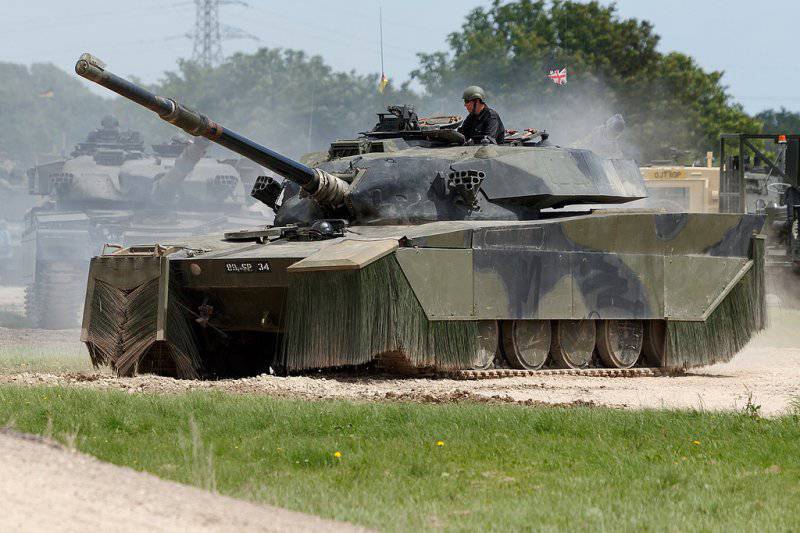 To study all the signs by which the tank can be detected, an armored vehicle of one of the later modifications was used. Before testing it was equipped with a set of additional equipment and several mounted modules. It is noteworthy that some of the equipment of the tank was made of simple and affordable materials: a large number of modules for additional “booking” were assembled from the most common plywood. Tank Chieftain SID was not intended for combat operations and was a purely research vehicle, thus making it possible to simplify the preparation of the prototype. On the frontal part, sides and roof of the case of the prototype, the Chieftain SID installed a large number of additional units, which gave the tank a specific "rectangular" look. The same units were installed on the sides and aft of the tower, which visually expanded and lengthened it. The authors of the project did not ignore the chassis, because of what appeared on the road wheels wheels, similar to the automobile.

Also, the chassis has received another original equipment, designed to reduce the likelihood of detection of the tank. At the same time, this innovation could reduce not only the radar or infrared visibility by the units of the chassis, but also by the cloud of dust generated during movement. To do this, on a prototype Chieftain SID mounted devices, because of its similarity with the folk costume of some African and Asian nations, called Grass skirt. The main element of this system is numerous thin synthetic threads, forming a kind of brush. As can be seen from the photos of the prototype, two configurations of this “skirt” were checked on the same tank.

The left track of the tank was covered in the front and rear parts, and the middle support rollers remained unclosed. The threads of the “brushes” freely hung from the suspension devices and formed a kind of curtain around the front and rear parts of the track. On the starboard side of the prototype tank there was a “Grass skirt” of a different design. Above the front of the track, a spring-loaded structure of metal parts was installed, two of which hung down and forward. They were fastened with relatively short and tough threads. Thus, in the front projection, the right caterpillar of the “Demonstrator” was closed by two contiguous “brushes”. Another difference in caterpillar covers was the absence of any aggregates along the starboard side near the drive wheel.

Accurate information about the tests prototype Chieftain SID still missing, which turns out to be fertile ground for the emergence of various rumors and speculation. Judging by the further development of the English armored vehicles, not all the innovations developed during the Signature Integration Demonstrator program had good prospects. Obviously, the closed chassis complicated the operation of the tank, but it did not give particular advantages over the standard configuration. As for the change in the shape of the hull and turret, the appearance of the main tank Challenger 2 confirms the usefulness of such solutions. At the same time, the characteristic contours of the hull and turret of the Challenger-2, formed by straight surfaces, are mainly justified by the need to install armor with a sufficient level of protection.

Both options to increase the survivability of tanks Chieftain, with all its originality, did not give the expected results. Modernization of armored vehicles of this type continued to go the old way: upgrading equipment, power plant, etc. Reservations remained old. All new ideas were only tested and tested on the basis of "Chieftain". It came to the practical application of some technical solutions later when creating new models of tanks. Thus, the conceived deep modernization of the main tank Chieftain in practice turned into several research and design works, which resulted in new technologies and know-how.

By the end of the renovation projects for the Chiften tank, the development of the new Challenger armored vehicle, which received special priority, had already begun. The main forces of the English tank building were thrown into the development of a new tank, because of which all work on the improvement of the previous technology was eventually curtailed. All prototypes of the improved Chieftain MBT that have been preserved by this time were remade in accordance with the original project and sent to the troops or transferred to museums. For example, the only prototype tank Chieftain SID is currently stored in the museum of the city of Bovington. From time to time the armored vehicle is shown at various exhibitions, including on the go.

Ctrl Enter
Noticed oshЫbku Highlight text and press. Ctrl + Enter
We are
Modernization of MBT with the aim of increasing their combat effectiveness in urban environmentsExport modifications tank Chieftain
17 comments
Information
Dear reader, to leave comments on the publication, you must to register.