The armed forces of Turkmenistan have 22 thousands of people (according to some sources, 26 thousands) and occupy the 91-e place in the list of states in terms of numbers. They consist of ground forces, air force and navy. Since Turkmenistan is in fact a totalitarian state and remains one of the most closed countries in the world, information about its armed forces is not published anywhere. Apparently, nothing to be proud of. Based on available sources, one can imagine what kind of a Turkmen army it is.

In July 1992, Russia and Turkmenistan signed an agreement on joint actions in the field of defense. In accordance with this document, the Russian Federation acted as a security guarantor of Turkmenistan and transferred parts of the former Soviet army stationed on Turkmen territory for the formation of national armed forces. Part of the Border Troops, Air Force and Air Defense remained under the Russian command. The rest are under combined command with a gradual transfer of it to the Turkmen side over 10 years.

During the transition period, Russia pledged to provide military-technical and operational-tactical support, as well as to pay compensation to the Turkmen side for the right to deploy its equipment on its territory, while Turkmenistan assumed the costs of maintaining and ensuring joint subordination. In 1993, Moscow and Ashgabat signed an agreement on the joint protection of the state border of Turkmenistan and the status of Russian military personnel on Turkmen territory. At the request of Ashgabat, Russian border guards left Turkmenistan by the end of 2000.

The Supreme Commander-in-Chief of the Armed Forces of Turkmenistan is the President (since 2006, Gurbanguly Berdimuhamedov). The General Staff of the Armed Forces is the main operational management body of the armed forces. The Ministry of Defense is developing, with the participation of relevant executive authorities, the concept of adopting systems weapons, military and special equipment and property, the state program of equipping the Armed Forces with modern types of weapons, and also forms the state defense order. 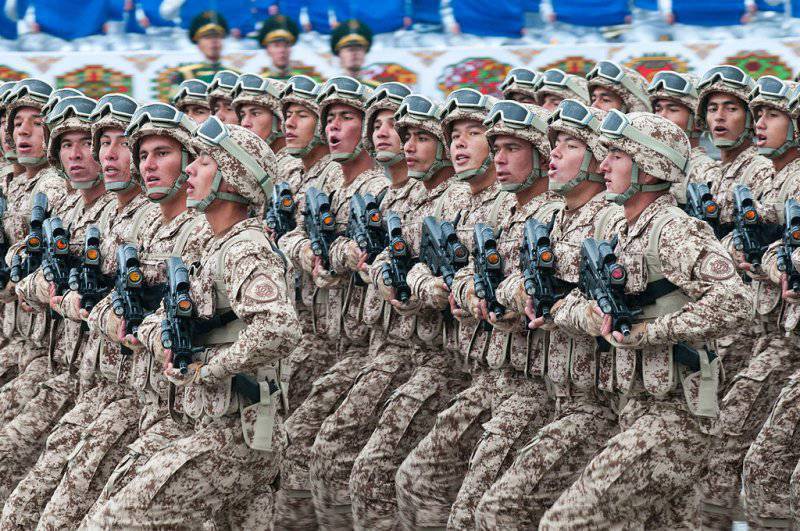 Turkmenistan maintains a neutral status. Resolution No. 50 / 80 “On Permanent Neutrality” was officially adopted by the UN General Assembly 12 December 1995. The new military doctrine was signed in January of 2009. It provides that, as a neutral state, Turkmenistan does not belong to any military alliances and blocs, does not produce or distribute weapons of mass destruction, does not participate in local and regional conflicts and does not deploy foreign military bases on its territory. It allows for the future transition to contractual service and plans to equip the army with the latest weapons. Military doctrine is defensive in nature. Subordinated to the goals of safeguarding peace in the country, respecting the integrity of its borders, maintaining the unity of the people, protecting its peaceful and prosperous life, strengthening the power of the armed forces and other troops, enhancing the international authority of Turkmenistan, developing friendship and fraternity with neighboring states.

As a threat to the country, the military doctrine considers:

Ctrl Enter
Noticed oshЫbku Highlight text and press. Ctrl + Enter
We are
Day of the Armenian army. How the armed forces of Armenia were formed and developedArmy of the world. Turkmen Armed Forces
Military Reviewin Yandex News
Military Reviewin Google News
29 comments
Information
Dear reader, to leave comments on the publication, you must to register.