The Minister of Defense ended hazing 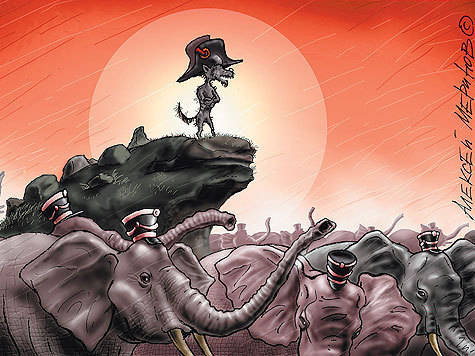 Letters to the president

Mr. President, feel yourself the Supreme Commander, because this is a letter about the army and about the most important commanders. But let's start with the ordinary soldier. He shot himself.

Last Friday, on the ground in the Sverdlovsk region, private Makarov shot himself twice. One bullet hit the left forearm, the other - in the heart. Military investigators claim that he shot himself by accident. “The basic version,” the staff said, “is careless handling weapons".

Anything can happen. But much more it looks like suicide: he wounded himself the first time, but finished off with a second shot. There is evidence that this is another victim of bullying; guy brought. If so, he posthumously became the enemy of the Minister of Defense. Because the Minister of Defense has publicly declared that we have no bullying.

On New Years, the minister gave a great interview. It is so beautiful that it would be best to put it on music and sing. For example: “There is not a single direction of the ministry’s activity that would not affect modernization, transition to a new look. We work everywhere - in all areas ... ”

You see, Mr. President, all directions and all areas are touched by your favorite modernization, hurray.

Minister Serdyukov was asked the duty question: did the army get rid of hazing? Get ready, Comrade Supreme Commander, the answer may shock you.

The minister responded in a military manner clearly:

- There is no such phenomenon in nature.

Everything would have been fine, but after two weeks (January 11 2011), the main military prosecutor Sergey Fridinsky gave a great interview. The journalist asks: “Everyone expected that“ dedovshchina ”would subside with the transfer of the conscription service to 12 months. But this did not happen. Why? ”The Chief Military Prosecutor replies:

- Yes, there were hopes that with the reduction of the length of service, many of the bad traditions will disappear, in particular, “hazing”. Did not happen. Today, it is the conscription servicemen who form the statutory statutes. Last year, more than 2000 soldiers and sergeants were convicted for assault and other violence.

The army, Mr. President and the Supreme Commander, this is your most vertical vertical. Vertical army in general can not be anything, agree? And there, inside, it turns out, just some kind of anarchy. The minister says that there is no bullying, but the chief military prosecutor refutes him.

Hazing is growing. According to the Chief Military Prosecutor’s Office, “the number of non-statutory relations increased 2010 times in 1,6 year”. The same was said last summer by Deputy Defense Minister Pankov, who called one of the main reasons for dedovshchina “communication skills acquired by draftees in informal youth groups of an extremist nature.” That is, hazing is and is growing, but not the army is to blame for this, but the bad acquaintances of school years.

We will carry out modernization, we will reform the education to the end, we will disaccustom the young people to drink, smoke and swear; intelligent intellectuals will come to the recruiting stations - dedovshchina will not. However, the Secretary of Defense knows a much faster way. In an interview (saying that bullying is no longer in nature), he added that “there is just hooliganism,” and explained how to exterminate it completely:

- It is important that the commander was in the unit, fulfilling his duties in full. Then there can be no conflicts by definition.

By what definition? - damn it knows. This is for beauty added.

“No conflicts”? - Yes, there are no such armies in the world and there can be no by definition, division and multiplication.

And the recipe is wonderful, from all diseases ... The Minister is asked: "Can we make it so that in the military units there does not arise an advantage of some ethnic group?" He replies:

- If the commander fulfills his duties in full, then just time and energy will not be in conflict. No misunderstandings will arise.

The recipe is simply brilliant: if all the officers are ... If all sadists become humanists ... if all alcoholics become sober ... If any “Mace” flies, where it is necessary ... If all the details in “Zhiguli” are made of the correct material and exactly the size, then will be a very good car by definition.

It remains quite a bit: fix the faulty officers. Let us return, Mr. President, to an interview with the Chief Military Prosecutor. The journalist says: “The rampant corruption in the country, as you well know, has not bypassed the army. This infection struck all categories of the military, from generals to lieutenants. ” The prosecutor agrees:

- The scale is sometimes amazing. Sometimes it seems that people just lost their sense of proportion and conscience. The amounts of detected theft are often shocking.

Shocking an experienced prosecutor is not easy. And the interview of the Minister of Defense (where modernization, spheres and a new look) ends like this: “It seems to me that everything is going quite well”.

What does the "seem"? Indeed, everything is going well, you can even say, she is floating in her hands, just manage to modernize and acquire a new look from a Russian designer, new ships from the French, new airplanes from Israel. And soon, they say, we will buy someone else's rifles and rifles (perhaps because our factories are maliciously slowing down on modernization and innovation).

Mr. Supreme Commander, you said in your Presidential Address: “Today we face the fundamental task of creating a new high-tech mobile army. We are going to spend on these goals more than 20 trillion rubles. This is big money. ”

Spend our generals are great. But what we get is a pitchfork on the water. Until now, alas, there were some unpleasant surprises. Including such sad ones as the suicide of a soldier after the Minister’s statement that there is no hazing.

Mr. President, would you like frankly? One of the fundamental problems (which cannot be solved with money) is as follows: senior officers do not respect the officers. They think of their ill-fated fate; about the years spent in vain waiting for human habitation; and they steal as much as they can. Of course, we will not smear everyone with black paint (we will not have enough), let's say this: some steal, while others see and are silent.

And since I had a frank conversation, I’ll have to say that not everyone in the army uses your special love tandem. Had you (invisibly) at any officer's desk, would have heard what they were saying about you, about the minister, about the prime minister ... You would have a dramatic change in your understanding of the world ... Or you would have decided that these were enemies who shaved off their beard and stole an officer's uniform from the studio Yudashkin.