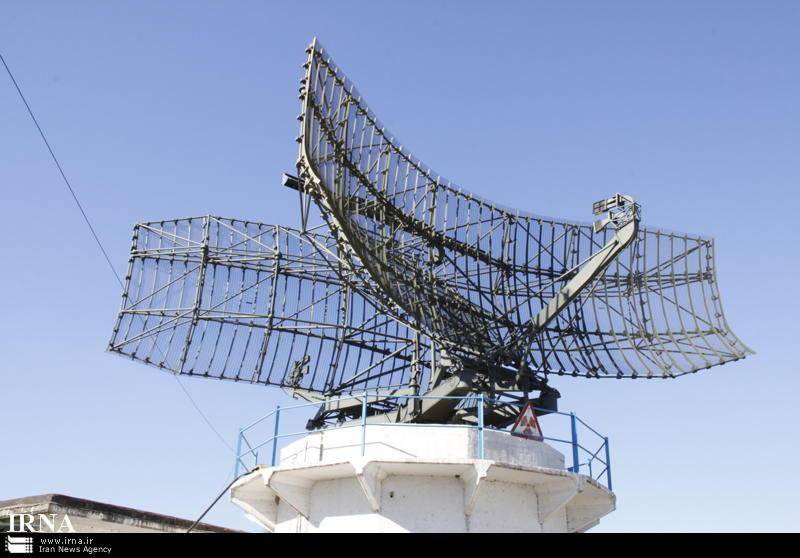 The background for the confrontation between the United States and Israel was the state of the Iranian armed forces, which came to the center of attention of many Internet resources and the media.

Iranian Air Defense and Combat Aroused A Lot of Discussion aviation. Iranian authorities understand the weaknesses of their Air Force, focusing on military action "from defense." In addition, much attention is paid to the improvement and development of air defense systems.

The Iranian authorities are not smiling to be on the same list with Iraq, Yugoslavia and Libya, so they are anxiously watching their air borders. After the last local clashes, it became clear that Western coalitions were starting conflicts with the suppression of air defense weapons and massive bombing and rocket attacks on key infrastructure and troops control points.

Even international sanctions do not stop Iran from trying to buy modern air defense systems abroad. Also, work is underway to improve the already used funds, as well as the creation of national designs.

An important component of the Iranian air defense system is the radio engineering troops (RTV).

There are several components of the aerial reconnaissance and warning system. For obtaining and issuing data on the used means of air attack for air defense systems, a network of ground-based radars is used, which are reduced to radar posts (RLP). These posts are on the dangerous directions of the state border. Iranian civil airports use 18 radars, which also monitor the air situation, transferring data to a single data exchange system. 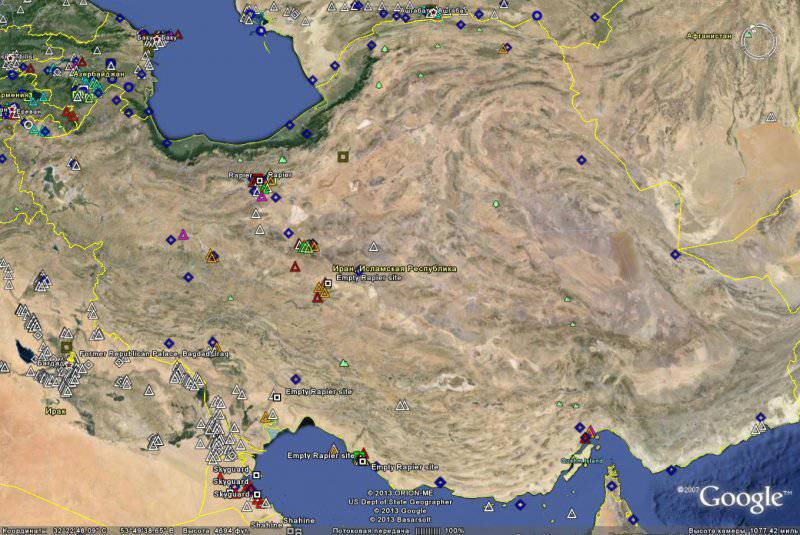 Satellite image of Google Earth: the layout of the position of ZRK (triangles) and stationary radar (blue diamonds)

During the Iran-Iraq war, the Iranian RTV was based on American radar: AN / FPS-88, AN / FPS-100, with AN / FPS-89 radio altimeters, mobile three-coordinate radar AN / TPS-43 obtained simultaneously with the Hok air defense system, as well as several British Green Ginger radar systems Type 88 (S-330) and radio altimeters Type 89.

Currently, these stations are being decommissioned due to physical deterioration. Replacement stations are purchased abroad, developing and producing their own. 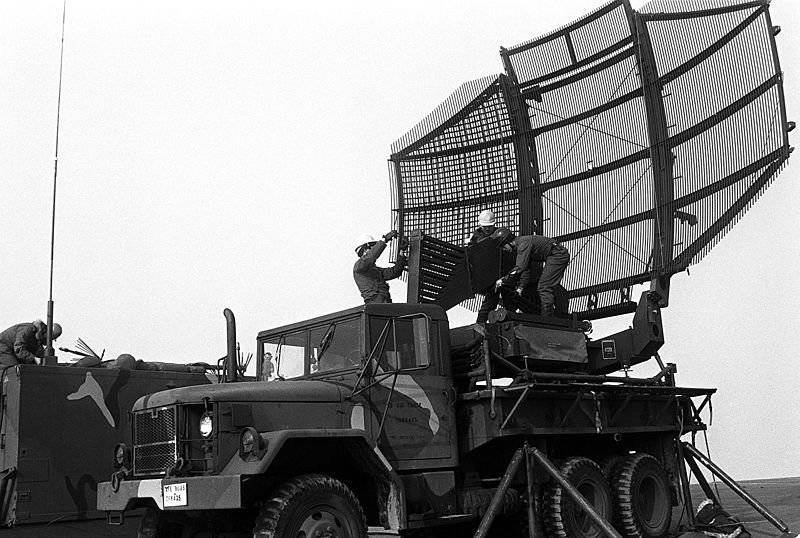 At the beginning of the 90-x, along with the delivery of the Russian C-200VE air defense missile systems, the early-warning radar "Defense-14", which was the development of the P-14 one of the most widespread radar stations in the USSR, was received.

To accommodate the radar used six large vans semi-trailers. The system can be minimized and deployed in 24 hours, which makes it conditionally mobile in modern combat conditions.

The station provides three modes of spatial viewing. "The lower beam" - an increased range for the detection of the enemy at medium and low altitudes. The “upper beam” is an increased upper limit of the detection zone by the angle of the terrain. “Scanning” - alternately switching on the lower and upper rays. 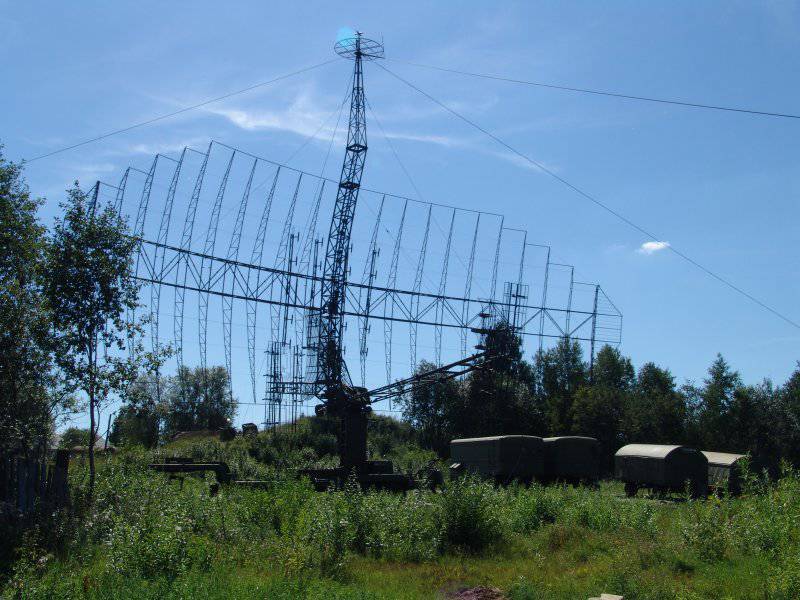 The detection range of a fighter-type air target is at least 300 km at an altitude of 10 thousands of meters. The station is served by four people.

The main purpose of the "Defense-14" - is the detection and tracking of air targets, including those using the "stealth" technology. After determining the state affiliation, target coordinates are given to the indicators and devices mated to the radar.

For the placement of the system uses six transport units. The complex includes an antenna-mast device, various equipment, as well as an autonomous power supply system on two semi-trailers. It is also possible to connect to the industrial network. In 1999, the digital radar station installed a digital center, increasing protection against passive interference, asynchronous interference and also reflections from local objects.

Together with the radar "Defense-14" the radio altimeter PRV-17 works, which determines the distance to the target, the height, speed and direction of its movement.

The device operates at altitudes up to 85 kilometers, and the detection range with a target height of 10 thousands of meters is 310 kilometers. 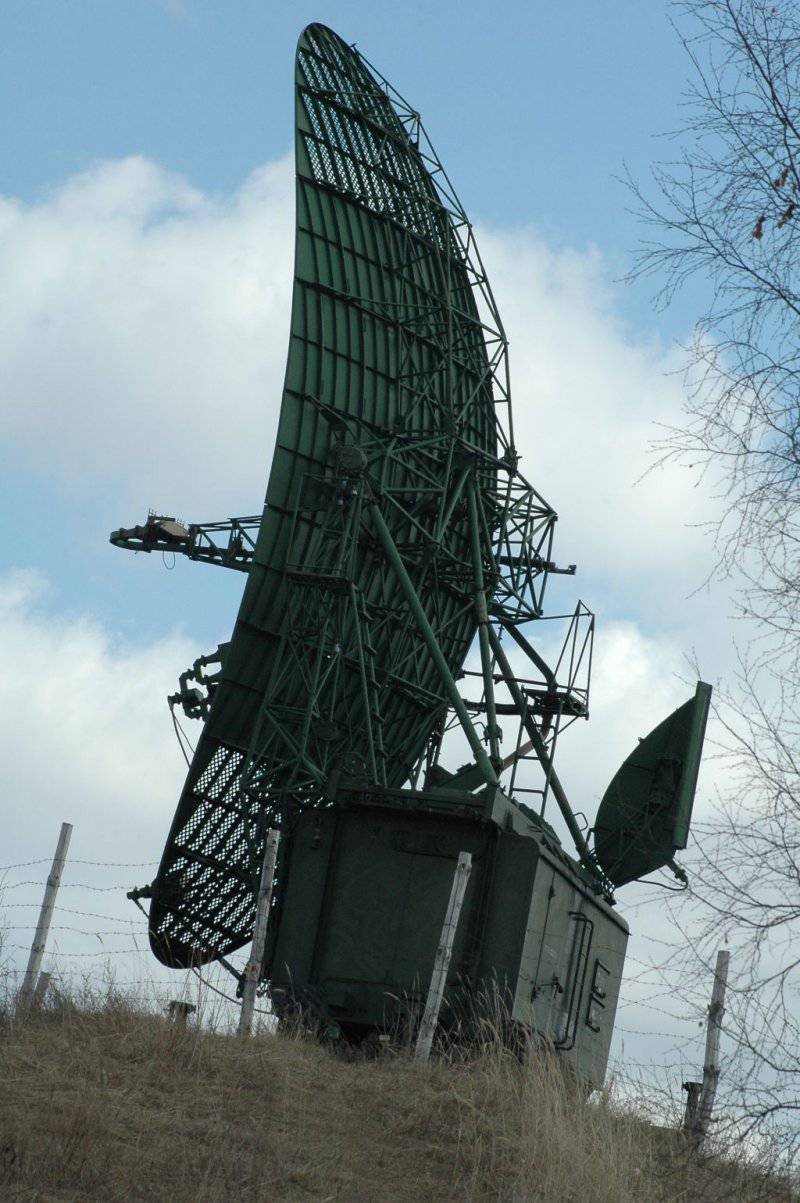 The data on the parameters of the detected target, obtained from the PDF-17, are automatically transmitted to the air defense system operators.

Perhaps the most valuable acquisitions of Iran’s air defense were the Russian Sky-SVU radar, which Iran showed during the exercises and parade in the 2010 year.

Radar 1Л119 "Sky-SVU" works in the meter range. This is a modern and mobile radar equipped with an active phased array antenna. It has good noise immunity, long-range operation.

The main purpose of this type of radar is automatic detection, as well as tracking of various targets in the sky, including subtle, using "stealth" technology. Even with 50% radiation power, the system can detect and escort UAVs with an effective dispersion area of ​​0.1 m. over distances of more than a hundred kilometers.

The detection range of a fighter-type air target is 360 km with a flight altitude of 20 thousands of meters. The deployment and collapse time of a station is up to thirty minutes. 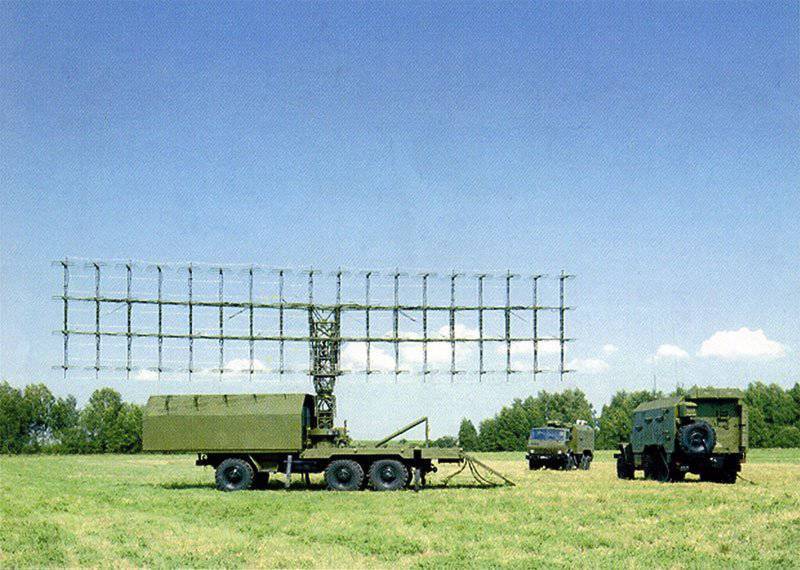 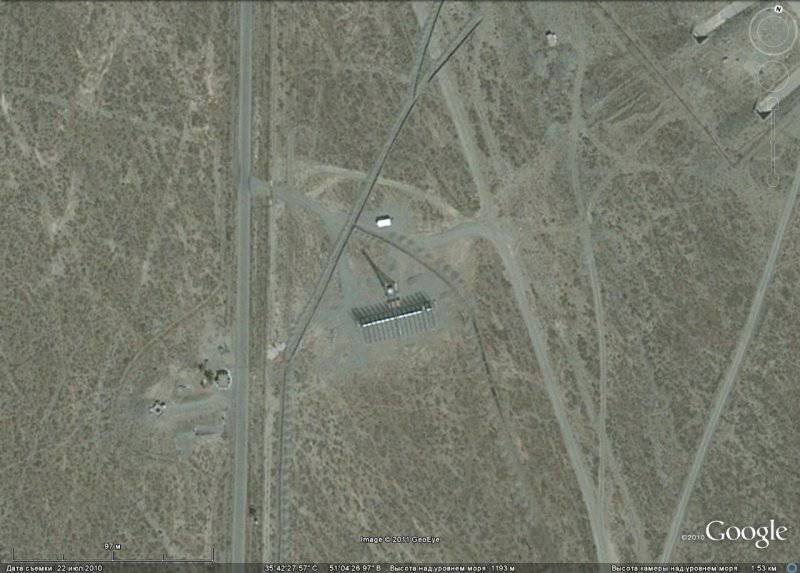 According to the official website of the Almaz-Antey Air Defense Concern OJSC, the station’s purpose is to control the airspace, as well as determine the azimuth, range, route characteristics and flight altitude of air objects, including flying at low and extremely low altitudes, conditions of intense reflections from underlying surfaces, meteorological formations and local objects.

Detection range of air targets with EPR 2 sq.m. The station at an altitude of 1000 meters is 95 kilometers. The station collapses and turns around in about twenty minutes. 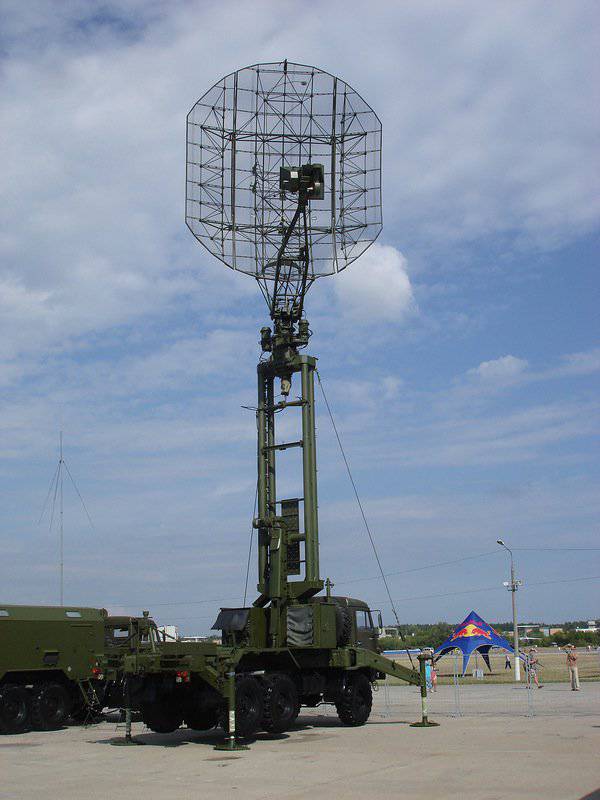 In addition to Russia, the supply of modern radar is engaged in China. One of the newest stations in the Iranian arsenal is the JY-14 radar, which was developed by experts from the East China Electronic Engineering Institute in 1990. Such radars can detect and accompany multiple targets within a radius of 320 kilometers. This data is transmitted to the air defense batteries. Also, the radar has the means to combat interference, which are provided to work in a tough electronic warfare.

The radar uses a flexible mode to switch the operating frequency, which contains a different frequency 31, a wide band of operating frequency parameters for noise tuning, and a linear frequency compression algorithm. This station can simultaneously monitor hundreds of targets, transmitting the coordinates of each to the missile air defense batteries in a fully automatic mode. Iran received a radar of this type about ten years ago.

It is worth noting that Iran is actively working on the development and creation of its own radar. The first was a copy of the AN / TPS-43 US radar. This three-coordinate radar has good mobility, detecting targets at distances up to 450 kilometers. 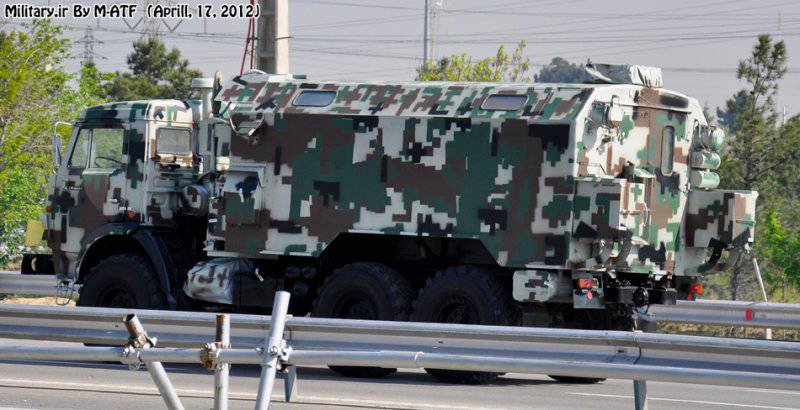 Radar "Caste 2EX2" in traveling condition at a parade in Tehran 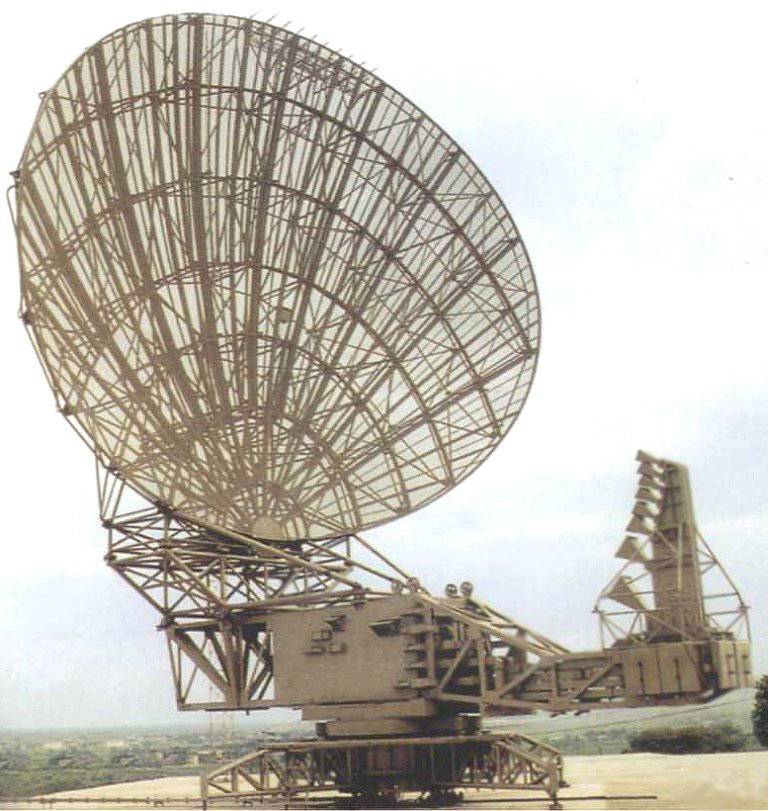 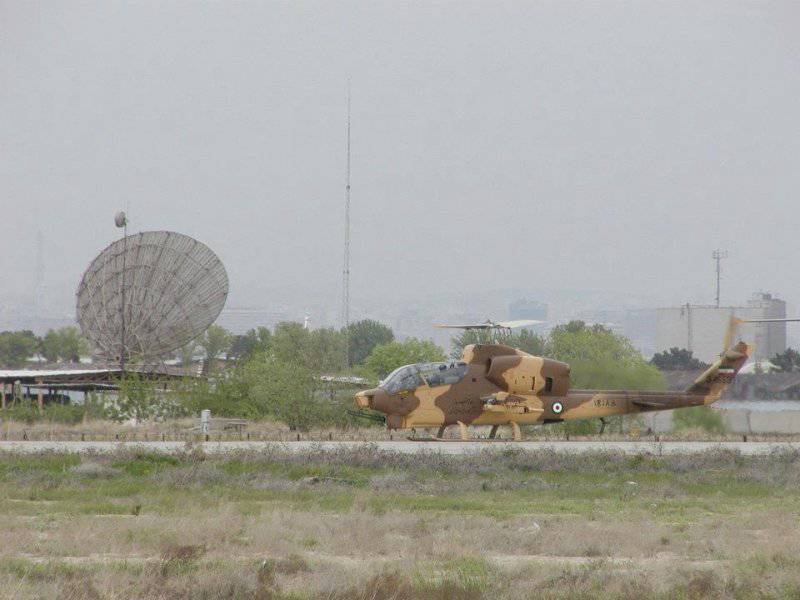 In the Iranian version, a semi-trailer is used to transport the station.

Also, Iran has a large number of mobile radar TM-ASR-1 \ Kashef-1 and Kashef-2, which created the organizations of the electronics industry of Iran. Since the middle of the 90-ies produced two-coordinate radar TM-ASR-1. The detection range of these radars is 150 km, and their appearance resembles the Chinese radar YLC-6. The deployment and collapse time of a station is 6-8 minutes with up to one hundred simultaneous targets. 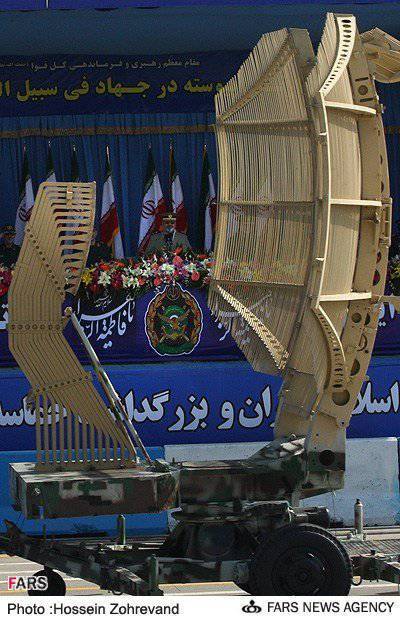 Recently, Iran has shown an option radar upgraded. It was named Kashef-2, another chassis, and a new folding antenna. 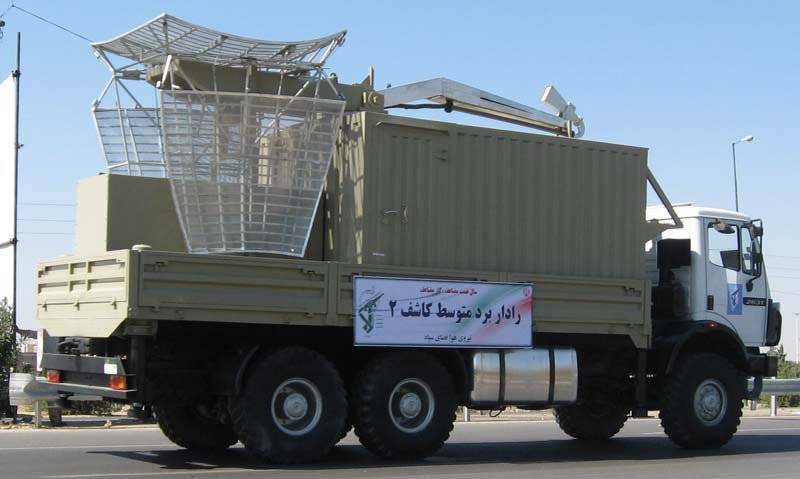 Also in service with Iranian air defenses there are mobile long-range radar systems operating in the meter range of local development. Their name is Matla ul-Fajr, and the manufacturer is the Organization of the electronics industry of Iran. Outwardly, they look like the old Soviet radar P-12. The first modifications of “Matla al-Fajr” began to be delivered at the beginning of the 2000-s. 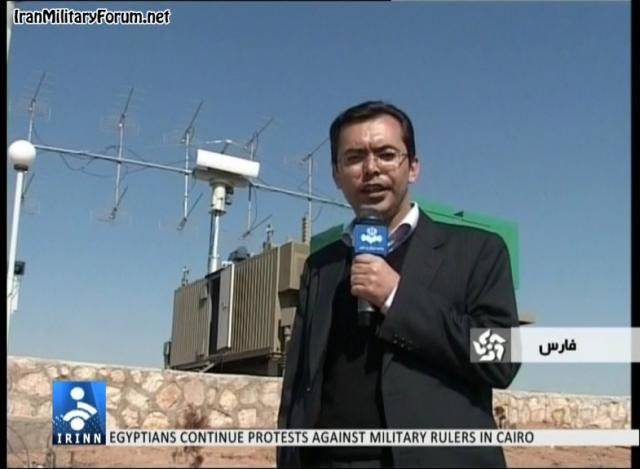 The main purpose of the radar data is to track large areas of airspace, detecting and accompanying various targets, including those that are hardly noticeable at a distance of up to 330 kilometers.

According to the Iranian Air Defense Command, these new radars have come to replace Western models (apparently American stationary radars AN / TPQ-88 \ 100), and they cover almost the entire territory of the Persian Gulf.

The organization of the Iranian electronics industry and the Isfahan University of Technology have developed a new radar meter range, which detects targets at distances up to 400 kilometers. In the media, they were called Matla ul-Fajr 2, but the official name may be different. 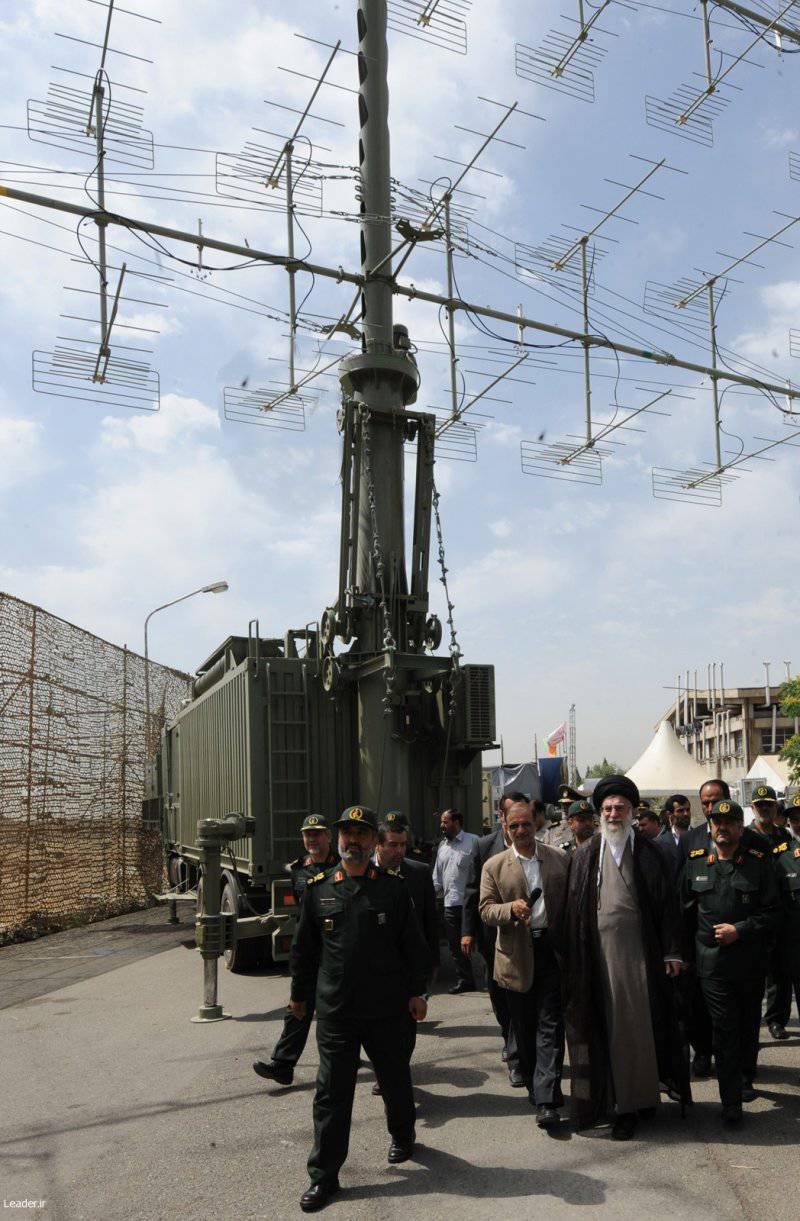 Radar Matla ul-Fajr-2 at the exhibition of the achievements of the Iranian military-industrial complex, which was visited by Iranian Rahbar Ayatollah Khamenei in 2011 year.

In the summer of 2011, the “Exhibition of Achievements of the Scientific and Defense Jihad of the Armed Forces” was held, at which a new radar with PAR was presented, supposedly called Najm 802. The appearance of this radar is similar to the Russian three-coordinate decimeter-range station "Gamma DE". 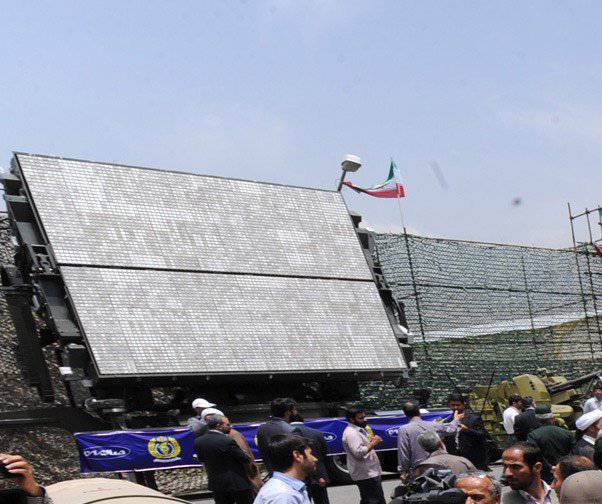 While there is no information about its entry into service, but most likely this radar is already being tested.

Iran has new electronic intelligence capabilities that can detect targets from their radar emissions. A few years ago, an exercise was held with the participation of the Russian radio electronic reconnaissance stations 1L122 Avtobaz. 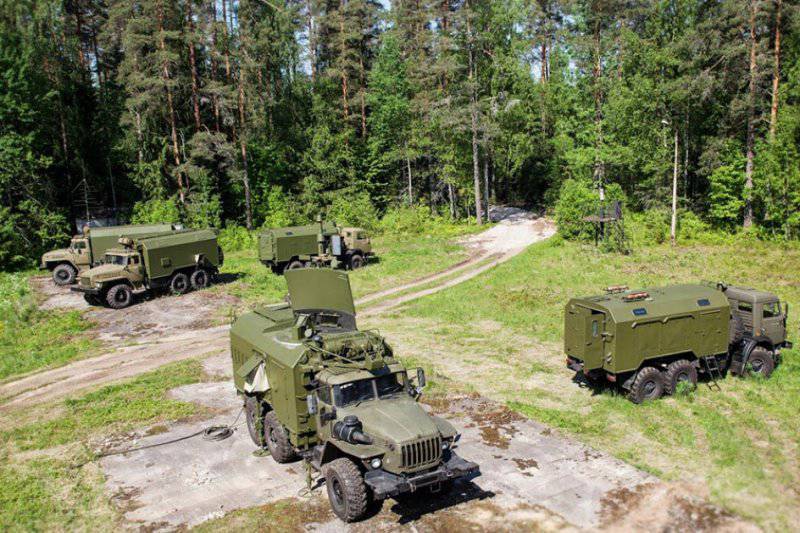 The main purpose of the reconnaissance complex is a passive search for emitting radars, including side-impulse radar, armored radar and low-altitude flight radar. The station gives out on the automated point the angular coordinates of all the radar stations, their class, number of the frequency range. 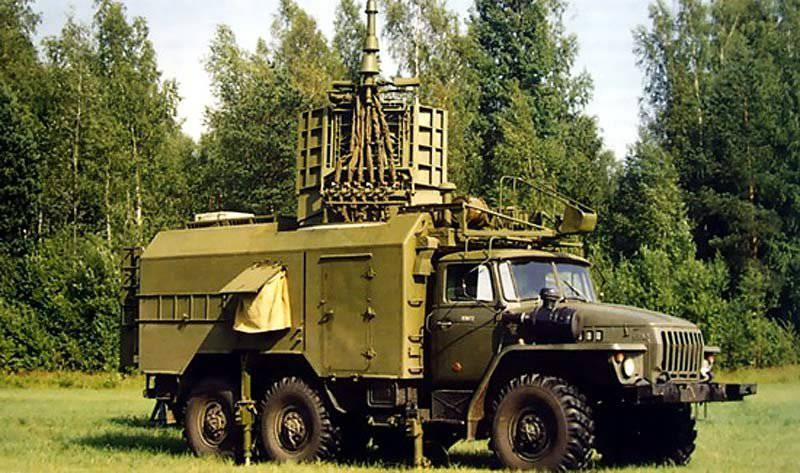 This complex provides a non-contact impact, which significantly reduces the capabilities of attack aircraft to detect and attack ground targets, and also distorts the readings of aviation radio altimeters, UAVs, cruise missiles, which can cause the failure of all electronic equipment.

It is possible that this complex took part in the forced landing of an American reconnaissance drone at the end of 2011.

The maximum exploration range of the complex is 150 kilometers, and the coagulation and deployment time is 25 minutes.

Currently, Iranian air defense and PTB are in the process of reorganization and re-equipment, they are not able to organize a continuous protection zone over the territory of the country, only important centers and regions hide behind. But significant progress has been made in this area, and considerable intellectual and material resources are being invested in the development of defenses against air attacks. Even now, Iran, if it cannot repel aggression, it will inflict serious losses on the attackers.