July 8 2013
42
In the course of the International Navy Salon last week in St. Petersburg, shipbuilders and ship systems manufacturers presented a number of new products. In particular, the Scientific and Production Enterprise "Start" for the first time openly showed its new development - the ship's anti-aircraft missile system "Shtil-1". In addition to “Start”, the Dolgoprudny NPP and MNIRE “Altair”, which are part of the “Almaz-Antey” concern, participated in the creation of the new air defense system.

The anti-aircraft missile system “Shtil-1” is primarily interesting for its architecture. The main element of the complex is a modular vertical launcher 3C90E.1. Thus, depending on the customer’s wishes, several launch modules can be installed on the ship, each of which can hold transport-launch containers (TLC) 12 with missiles and has dimensions 7,15 x 1,75 x 9,5 meters. To install the 3C90E.1 starter module, the volume inside the ship’s hull is about 10 meters deep. TPK are placed in modules in two rows of six. This arrangement of containers allows you to enter a sufficiently large number of missiles in a relatively small volume. The overall parameters of the new air defense system are described as follows. When upgrading the 7,4 project destroyer to the place of the M-956 “Uragan” missile system with a beam launcher, after minor modifications to the ship’s design, up to three modules “Stiel-22” with a common ammunition in 1 missiles can be placed. In the case of the old air defense system, only 36 rockets are placed in the cellar volume. This space saving is achieved due to the absence of missile feeding mechanisms for the beam launcher.

Another feature of the air defense system "Shtil-1", which distinguishes it favorably from the "Hurricane" is also a direct consequence of the vertical placement of missiles in the TPC. Thanks to this placement of ammunition, the new anti-aircraft complex is capable of launching rockets with a break of about two seconds. The launch of the second rocket is allowed after the first has left the ship at a distance of several tens of meters. The complexes with the beam launcher and the missile feeding system from the cellar take much longer to prepare for re-launch. 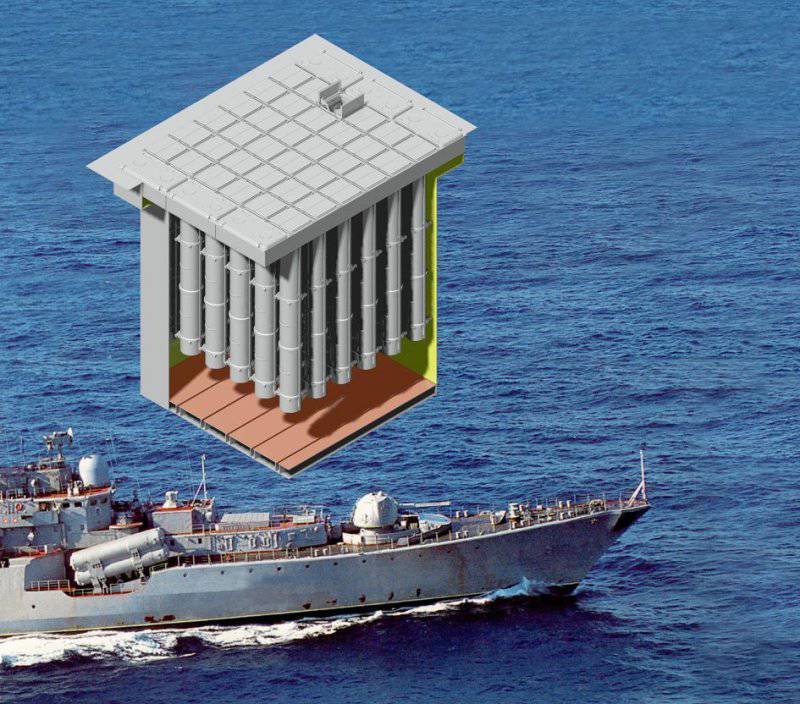 In the anti-aircraft complex “Shtil-1”, the 9M317ME guided missile is used, which is a further development of the Buk land-based air defense missile system. This is a single-stage rocket with a solid-fuel engine, having a length of 5,18 meter and a case diameter of not more than 360 millimeters. In the tail of the rocket there are steering wheels with a span of 820 mm. With a starting weight of about 580 kg, the 9М317МЭ anti-aircraft missile carries an 62-kilogram fragmentation warhead. On the trajectory, the ammunition accelerates to speeds of the order of 1500-1550 meters per second. The main difference between the 9М317МE missile and the previous Buk family anti-aircraft munitions is the launch method and a number of related design nuances. At the command of the anti-aircraft missile system operator using a powder charge, the TPC is fired at an altitude of about 10 meters above the ship’s deck. At this altitude, the rocket, using its own gas rudders, makes a turn in the direction of the target, after which it turns on the main engine and the guidance system.

According to some sources, the maximum range of destruction of the target by a rocket of the “Calm-1” complex reaches 50 kilometers, the maximum target speed is up to 830 m / s. The guidance system of the 9М317МЭ rocket is, by principle of operation, similar to the equipment of previous Buk family missiles. A ship-borne missile is equipped with a semi-active radar homing head and is aimed at a target with the help of a backlit radar signal reflected by it. There is information about the development of several algorithms for the homing head, designed to detect and defeat various types of targets. In this case, the type of target directly affects the maximum range and height of the lesion. For example, the “Shtil-M” air defense system is capable of hitting airplanes flying at altitudes of about 15 thousand meters, but for cruise missiles, the maximum height of destruction decreases by about a third. In addition, the range of the aircraft flying at low altitudes, about half the maximum possible. 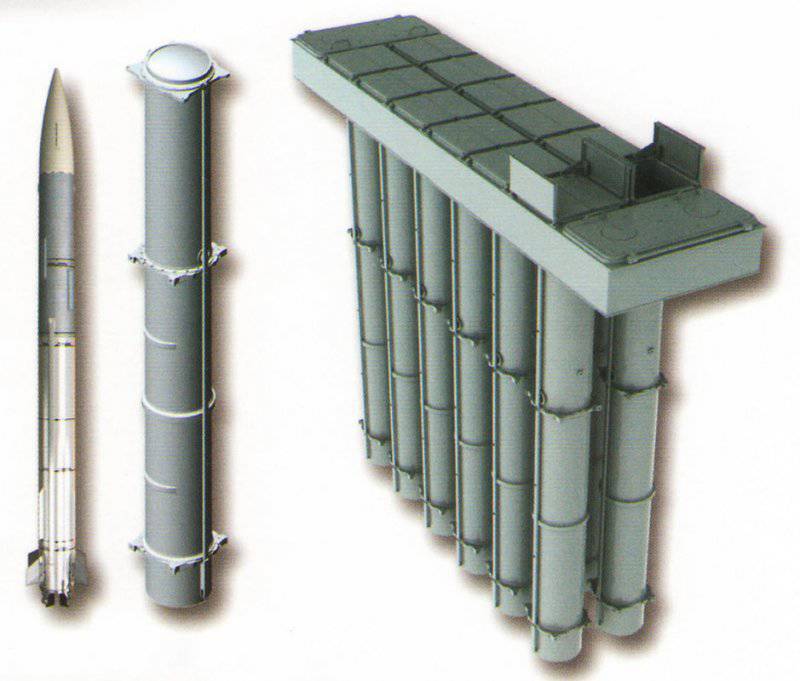 The anti-aircraft missile system “Shtil-1” incorporates missile launchers and a number of additional equipment. Own detection systems are missing. For these purposes, the new air defense system uses naval three-coordinate radar stations. The electronic equipment of the complex includes a computer system, a control panel and a set of radio transmitters for illumination of the target. Electronic equipment allows you to attack up to 12 targets simultaneously. In this case, as mentioned above, the interval between starts does not exceed a few seconds. Due to its architecture, the equipment of the anti-aircraft complex “Calm-1”, if necessary, can be installed on any suitable ship without major design modifications.

The “Shtil-1” air defense missile system is intended for installation on ships of various types with a displacement from 1500 tons. The modular structure of the vertical launcher allows you to mount it on a large number of ships of various projects. In addition, it is possible to install units in place of other anti-aircraft missile systems in the course of modernization and retrofitting of ships. It is expected that these features will give the new air defense system a great future. 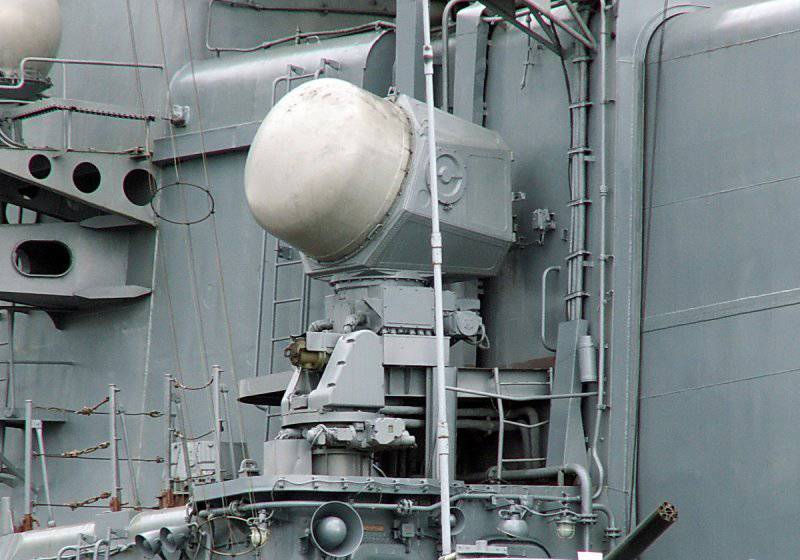 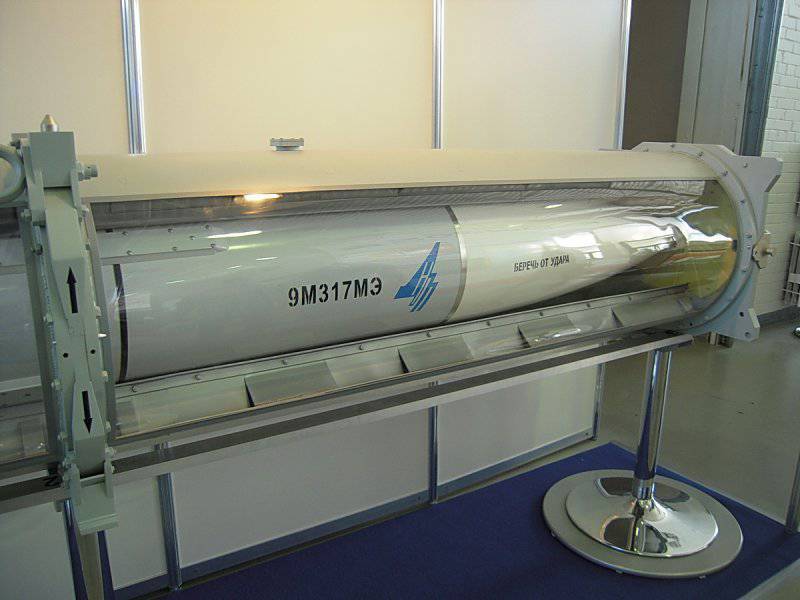 The warhead is a high-explosive fragmentation weighing 62kg, equipped with contact and non-contact fuses. The missile can be stored in the TPC without maintenance work until 15 years.

Ctrl Enter
Noticed oshЫbku Highlight text and press. Ctrl + Enter
We are
The danger of a complete replacement of the "Dirks" and "Daggers" with the new shipboard M-Tor and Wasps of the 21st centuryCoastal Warships: Modern Approach
42 comments
Information
Dear reader, to leave comments on the publication, you must to register.