Air Force of the Islamic Republic of Iran 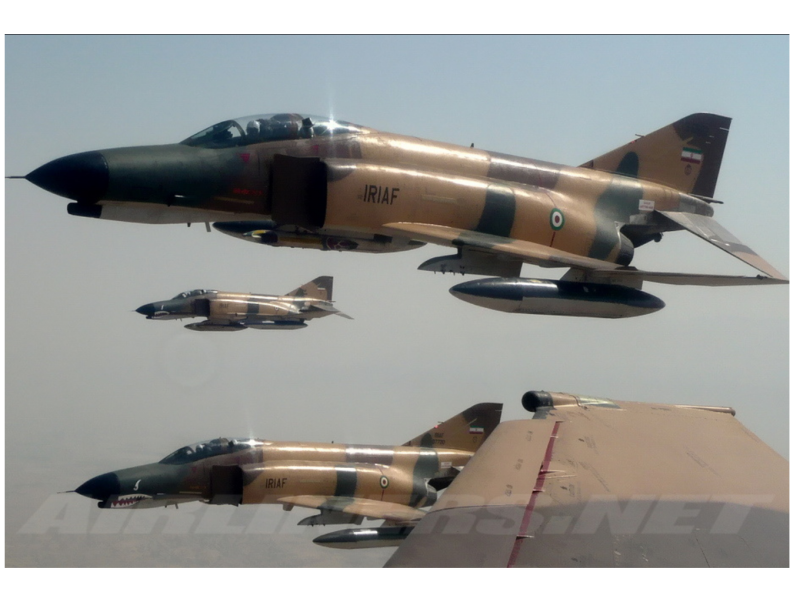 The Iranian air force is considered an independent type of armed forces, which also includes air defense forces. Also, their own air force has the corps of the guards of the Islamic Revolution (IRGC).

The air force has 12 airbases, including ten fighter and two transport. They serve as the base for 12 squadrons of transport and 25 combat aviation, 2 helicopter squadrons, about 10 aircraft and helicopter control and communications units, as well as 10 search and rescue units.

During the reign of Shah Mohammed Reza Pahlavi, who supported the United States - in the 70 of the last century - the Iranian air force was the most equipped in the Middle East. In particular, they were armed with X-NUMX F-79 aircraft, moreover, a contract was signed that provided for the supply of X-NUMX units of F-14. 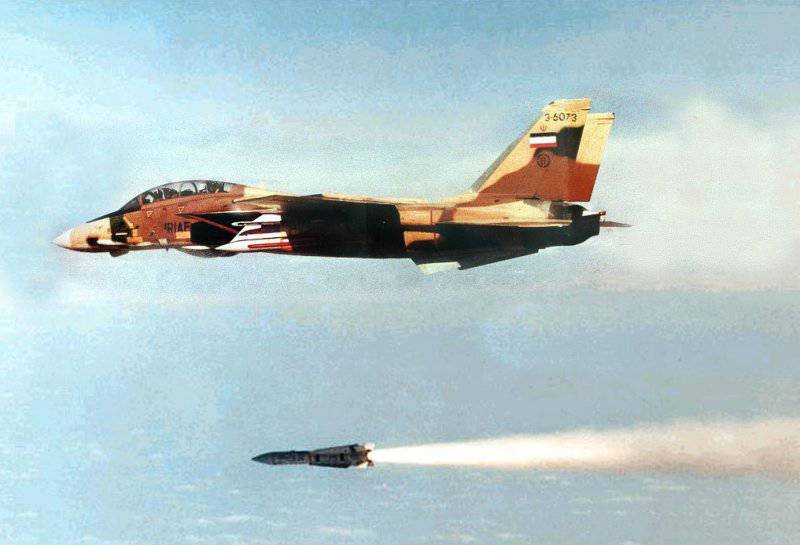 The Islamic revolution and the rupture of relations with America led Iranian aviation to decline. There was no supply of F-16, and soon the Air Force stopped receiving parts.

After the 1979 revolution, modern Iranian Air Forces were created on the basis of the Shah Air Forces, which immediately faced considerable difficulties. In particular, the United States imposed an embargo on the supply weaponsthat deprived the Iranian fleet of spare parts. At that moment, mainly American helicopters and aircraft were in service. In addition, the new government perceived former officers of the Shah’s army with suspicion, so many experienced pilots and commanders were repressed.

In any case, the Iranian air force played an important role in the early part of the Iran-Iraq war, which began on September 22 of the year 1980.

Attempts by Iraqi military to destroy enemy air units in the airfield territories failed. During the week after the outbreak of hostilities, Iranian aircraft (F-5 “Tiger II”, F-4 “Phantom II”, F-14 “Tomcat”) had to make many sorties to bomb a number of economic and military facilities in Iraq, including in Baghdad.

Iranian aviation caused significant damage to the Iraqi rear system, which significantly slowed the pace of the Iraqi army.

In April, the Iranian Air Force managed to conduct one of the most successful operations on 1981. During a raid on the territory of Western Iraq, several dozen enemy aircraft were destroyed at one of the airfields. However, by this time, the activity of the Air Force began to decline, and after 1982, they had almost no effect on the course of the hostilities. The units lacked spare parts, so the technicians were engaged in “cannibalization”, dismantling helicopters and airplanes. In turn, this has steadily reduced the number of vehicles ready for combat sorties. In 1983, Iranian pilots could lift about a hundred cars into the air. This deplorable situation persisted until the end of hostilities, although some secret arms transfers from the United States and Israel were carried out. 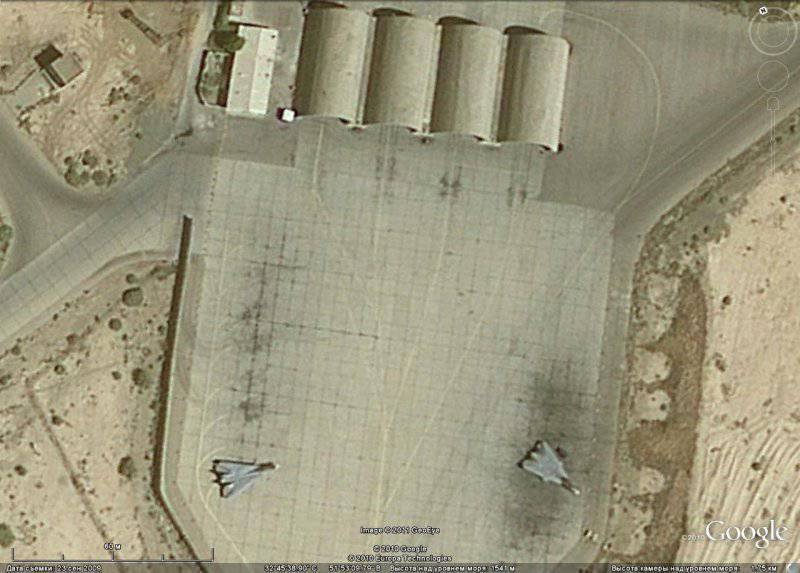 After the end of the Iran-Iraq war, attempts were made to replenish the fleet of combat aircraft. The purchase of 60 F-7М (the Chinese version of the MiG-21F) in China, however, could no longer be considered a modern weapon.

An unexpected replenishment happened at the beginning of 1991, when, during the fighting in the Persian Gulf, most of the aircraft of the Iraqi Air Force moved to Iran, trying to escape from the allied aviation. Iran did not want to return these aircraft, believing that this is a kind of reparation for the consequences of the eight-year war. Some of these aircraft became part of the Iranian Air Force. 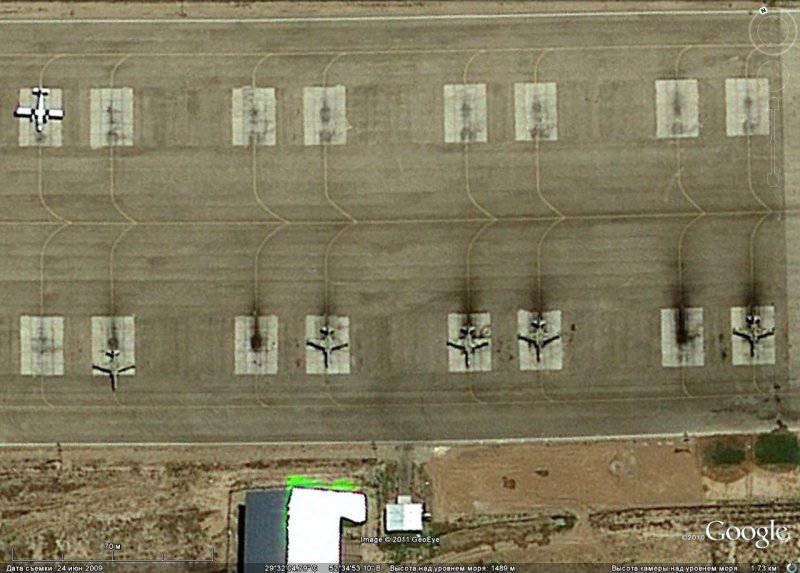 But the lack of an established service system and spare parts, as well as experienced pilots and technicians, did not allow most of the aircraft to become part of the Air Force. According to some information, 4 MiG-29, 10 “Mirage F.1”, 24 Su-24, 7 Su-25 were adopted. 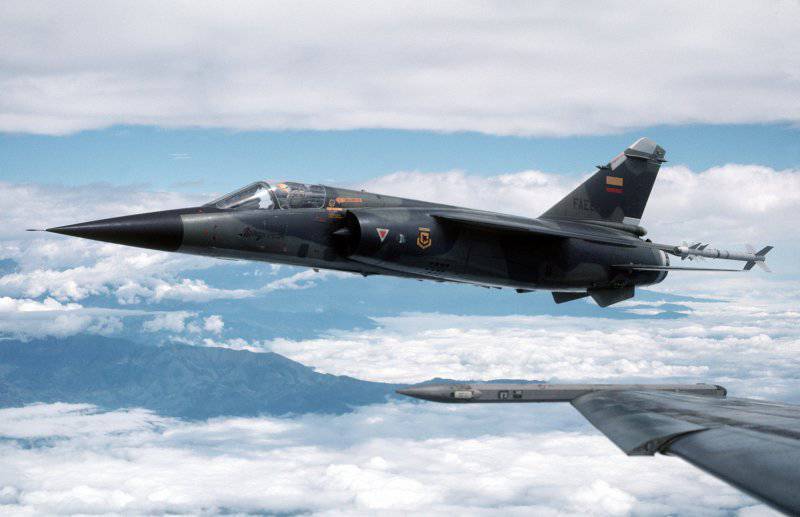 Since 80, China has been engaged in the supply of aircraft to Iran, and from 90, Russia and some other CIS countries have been added to it.

Therefore, now in the aviation fleet of the Iranian Air Force there are American, Soviet, Russian, Chinese, French and Ukrainian aircraft, as well as several of their own unique developments. 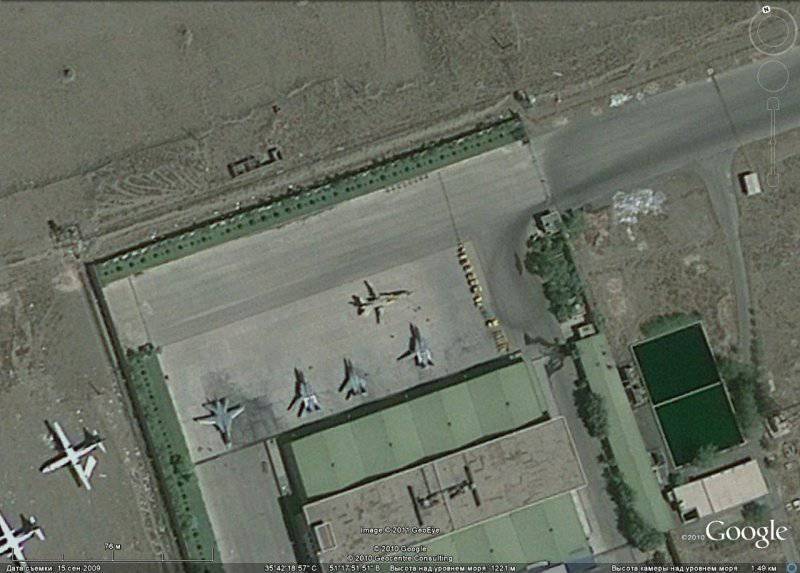 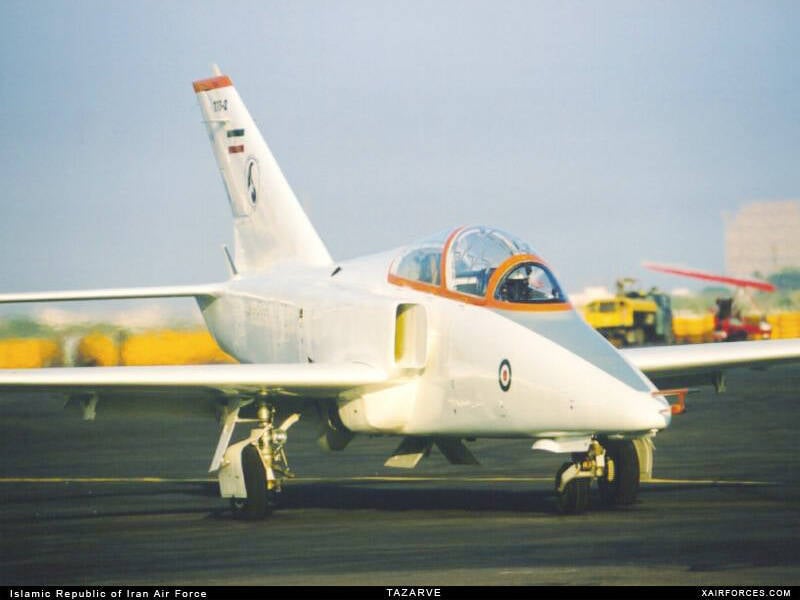 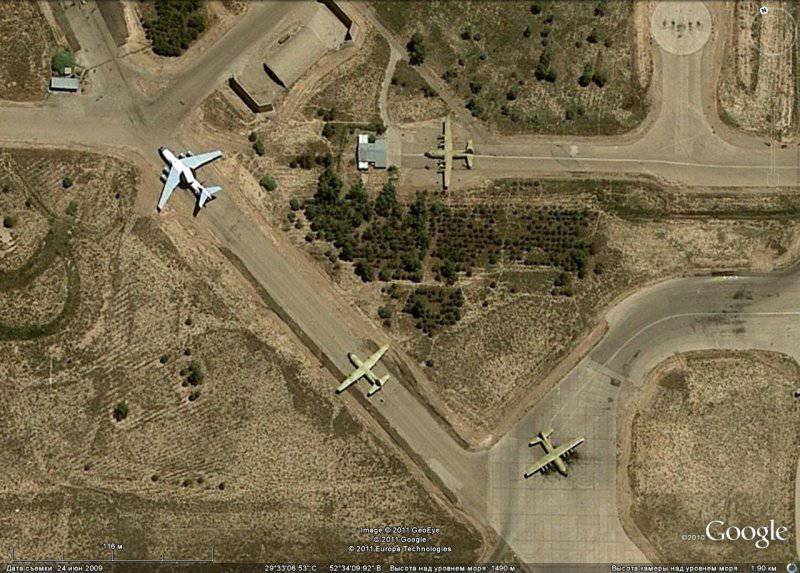 In addition, a large number of unmanned aerial vehicles are being produced on the territory of Iran, including drums. The heaviest of them is the Karrar UAV, capable of carrying a ton of payload. For reconnaissance operations used by the UAV Ababil. The Mohajer series of medium drone is used for reconnaissance and targeting laser ammunition. 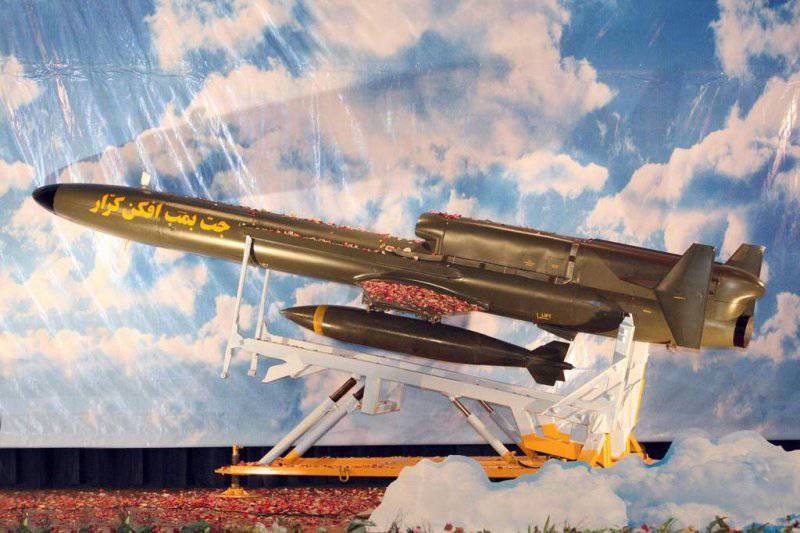 Note that Iran is actively developing and creating its own samples of combat aircraft.

The Iranian classification of fighters has some differences from the global, as the determining factor is the time of creation, and not certain features and characteristics.

The first generation is represented by the HESA Azarakhsh fighter, which was created in the 90's. The second generation is the Saeqeh fighter. At the same time, Saeqeh is a deeply modernized Azarakhsh. Both aircraft also show features of the Northrop F-5E of American production, which was shipped to Iran in the 70s. 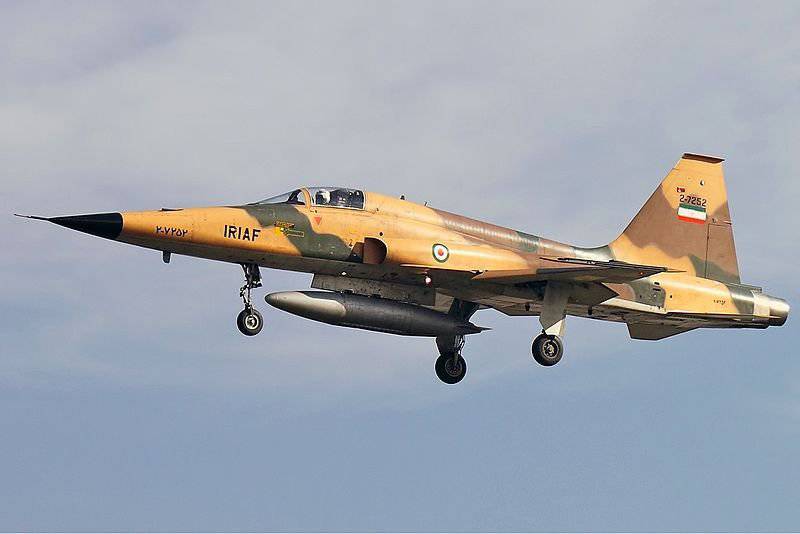 The development of the first fighter in Iran began in the second half of the 80-s. The aircraft was named "Lightning" - "Azarakhsh". Work on it was carried out in the company IAMI (Iran Aircraft Manufacturing Industrial, also known as HESA) together with the Shahid Sattari University and the specialists of the Iranian Air Force. The main reason for the start of their own development is the loss of the ability to acquire modern aviation equipment abroad, primarily in the United States. In 80-ies, Iranian designers have not yet gained the necessary experience, so the development of "Lightning" was delayed. The first prototype was lifted into the air only by 1997 year.

Azarakhsh is somewhat larger than the F-5E: 17.7 m length, wingspan - 9.2 m. The Iranian fighter received a wing area of ​​approximately 22 sq.m. Its maximum take-off weight is 18 tons with its own weight without a combat load of 8 tons.

Two Russian-made RD-33 turbojet engines are used as power units, the maximum thrust of which is 8300 kgf. In 2007, Iran signed a contract for the supply of fifty such engines for a total amount of 150 million dollars.

In the serial version of the crew consists of two people. Their jobs are one after another. Different sources contain different masses of the payload of the aircraft, as well as its weapons. This parameter ranges from 3500 to 4400 kilogram. The aircraft is equipped with a Russian radar H019ME "Topaz". 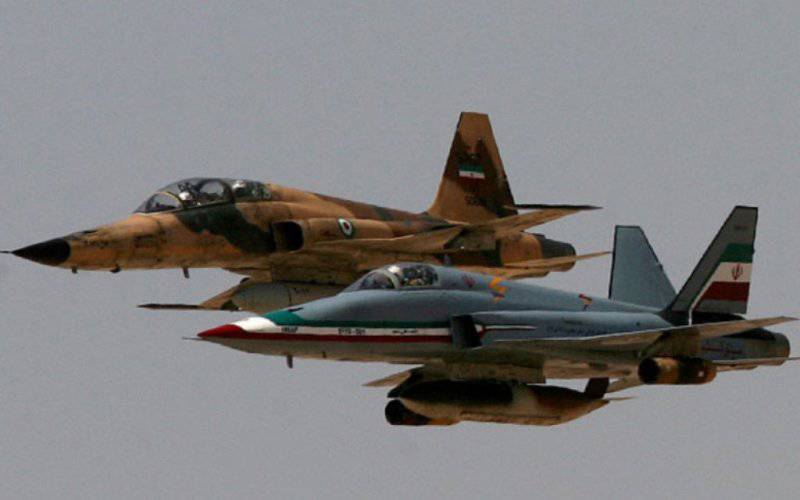 Since the first flight, about thirty Molniya aircraft have been launched, and their electronic equipment has been modernized several times. Airplanes of this type have significant differences from each other, which greatly complicates their maintenance.
By the time of test flights "Lightning" has already begun a deep modernization of the machine. The aircraft of the second generation was named “Lightning strike” - “Saeqeh”.

In 2001, information appeared about the construction of the first Saeqeh prototype, but it only went up to the sky in May 2004.

The main difference from the previous car - the aircraft became single. Major changes affected the tail section, which received new contours and a second keel. The refusal of the second crew member allowed to reduce take-off weight without changing the engines and avionics. The weight of an empty Saeqeh is 7800 kg, and the maximum take-off weight is 16800 kg. Flight and technical characteristics were also improved: the speed increased to 2050-2080 km / h, and the flight range increased to 1400 km.

The test program of the new aircraft became more successful, therefore, already in 2007, the pilots of the Iranian Air Force demonstrated new Lightning Strikes at the parade. And in September, 2007, they were officially adopted. 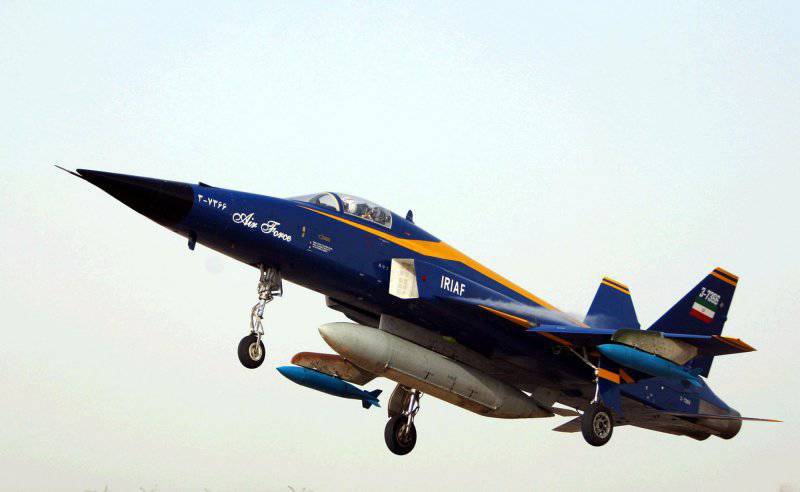 Over the next six years, about 30 of such aircraft were launched. But, against the background of large-scale write-offs of American aircraft, this is clearly not enough.

February 2 The 2013 of the year was presented a promising Qaher-313 fighter of Iranian production. This event was timed to commemorate the Islamic revolution that took place in 1979 year.

The Iranian military avidly talked about the great combat potential of the machine, which is not only almost imperceptible on radar, but also equipped with advanced onboard solutions in radio electronics. 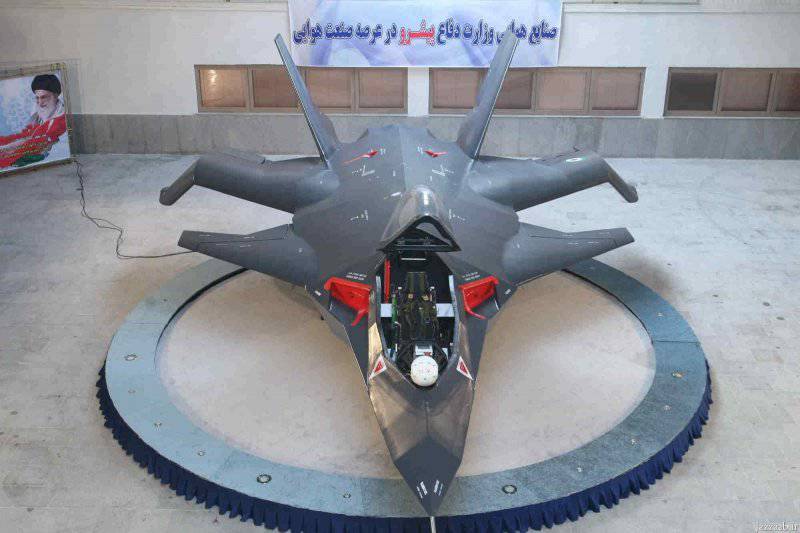 The main feature of the new aircraft is a small effective reflecting area, which makes it subtle for enemy radar installations. Iranian Defense Minister Ahmad Vahidi said that the properties of a fighter can effectively conduct combat operations at low altitudes. At the same time, according to the project manager of Qaher-313 Hassan Parvaneh, only Iranian components are used in the aircraft.

The general public presented the aircraft with a rather strange appearance. It has an integral layout, a “duck” scheme is also used, which implies excessive forward horizontal tail, a wing of a normal sweep, the tips of which are deflected downwards by 50-65 degrees, as well as the “ruined” keels. Appearance turned chopped, apparently, to reduce the visibility on the radar. Another engineering solution - besperepletny lantern. 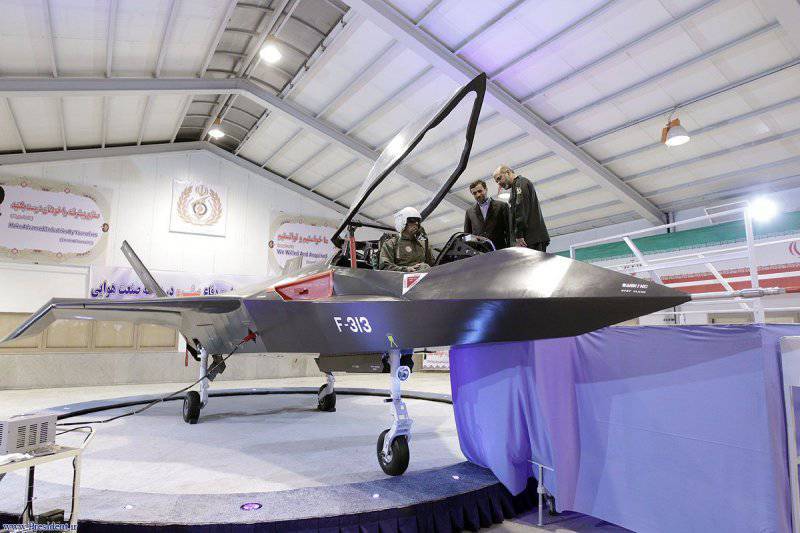 Vahidi noted that high-tech materials and advanced electronics were used in the construction of the aircraft. The machine can use Iranian-made high-precision ammunition. Another feature of the aircraft is the ability to take off and land from small runways.

However, even after the loud statements of the Iranian military, when you look at the plane shown on the Iranian TV channels and news agencies, you get the feeling that it is not able to take off. The fighter has such a small nose that it is not clear where the radar station could be located there. In the published pictures, you can see a primitive dashboard, which suggests that it was not even a prototype, but simply a layout.

It is worth noting that, in general, the technical solutions used to create them are quite interesting, but they still leave strange sensations.
The aircraft looks more like a large model than a full-fledged fighter. In addition, Iran has not received information on world technical developments for several decades now, and therefore doubts arise about the claims of breakthrough technologies by Iranian scientists. Iran practically does not have its own developed industry and scientific potential.

Apparently, the main purpose of such a demonstration is to raise the morale of ordinary people in Iran.

In the case of the start of full-scale clashes with the forces of the United States and allies, the Iranian Air Force will most likely fail to do anything significant. The relative small number, outdated equipment, the lack of the required number of modern means of destruction - all this will not allow aviation units to provide effective cover for troops and ground infrastructure, as well as attack US bases on the opposite shores of the Persian and Oman gulfs.

The situation could be corrected by procuring modern combat aircraft abroad. But to adjust deliveries from the USA or Europe is simply impossible.

The balance of forces in the region could change a few dozen modern Su-30MK2 aircraft with weapon sets. But after the disruption of the supply of C-300P airplanes to Iran, for which the contract was terminated under pressure from Israel and the United States, this option is hardly possible.

Ctrl Enter
Noticed a mistake Highlight text and press. Ctrl + Enter
We are
An-12 in AfghanistanMiG-21 in Afghanistan
33 comments
Information
Dear reader, to leave comments on the publication, you must to register.