Do-335 "Pfeil" - the fastest piston aircraft in history

July 5 2013
35
Do-335 - heavy German fighter, fighter-bomber from the Second World War, which is often referred to in various sources as Pfeil (Pfayl - it. Arrow). Do-335 "Pfeil" was the fastest piston aircraft in stories. This aircraft had more than a revolutionary design, although this arrangement using two tandemly located engines was not completely new. Until the end, the Wonnards in Germany managed to assemble all 37 of such aircraft, they did not take active part in the hostilities.


If it were possible to hold a competition for the most unusual aircraft designed during the Second World War, the Dornier Do-335 “Pfeil” would have excellent chances to take one of the prize places in it. Unlike most of its competitors, which, despite the advanced designs, did not have a noticeable combat value, the Do-335 was a very successful combat aircraft. The Do-335 Pfeil was one of the fastest piston fighters in history. aviation. If German designers were able to solve all the technical problems that the fighter pursued at all stages of its development and organize its mass production, then the Luftwaffe would have a machine of exceptional qualities that could effectively withstand any Allied aircraft. Therefore, there is nothing strange in the fact that after the end of World War II, the Allies were very active in testing the Do-335 aircraft that fell into their hands. But the rapid development of jet aircraft quickly enough made the Do-335 an irrelevant combat aircraft.

The design of this fighter was based on a tandem engine layout scheme, which K. Dornier patented as early as 1937 year. In accordance with the scheme of the famous German aircraft designer, in addition to the traditional front engine with a pulling propeller behind the cockpit, there was a second engine with an elongated shaft and a pusher propeller. The pushing screw was behind the tail.

The Do-335 “Pfeil” was a multi-purpose vehicle, it was planned to be used as a heavy day fighter, high-speed bomber (with a 500-1000 kg bomb load), a night fighter (single and double), a reconnaissance aircraft and a training vehicle. Do.335 was already the 3 variation on the use of 2 engines on the aircraft’s symmetry line — the rear engine actuated the tail rotor located behind the cross-shaped tail. Such an unusual position of the screw was not a novelty, it was used as early as 1911, by Tatín-Polhan in Aero-Torpil. But it is worth noting the fact that before the appearance of the Do-335, no one had yet applied such an arrangement of the rear screw together with the use of an ordinary pulling screw in the front, which actually ensured Strela its uniqueness among all other combat vehicles.

By the end of 1942, after the design was completed, Germany began preparations for the production of a new aircraft. By the time of the first flight of the Do-335-V1, which took place on October 26 1943, Dornier received an order for 14 prototype aircraft, pre-production 10 machines - Do-335a-0, 11 production aircraft - Do-335-1 in version single-seat fighter-bombers, as well as the 3's Do-335a-10 and -12 - two-seat training aircraft. After conducting a preliminary assessment of the manageability of the aircraft in Oberpapengofen, the first car was transferred to the test center in Rechlin, where they were to undergo official tests. Despite the fact that the plane was experiencing some "wobbling" during flight at high speeds, the pilots from Rechlin were delighted with the flight qualities of the Do-335 fighter. German pilots noted good maneuverability and especially the acceleration characteristics of the aircraft and the turning radius. Do-335 could fly with one working front or rear propeller. In the case of the nose motor shutdown, the speed of the aircraft still remained impressive - up to 557 km / h.

The Do-335 was a low-profile all-metal design. The wing of the aircraft was trapezoidal, the wing sweep on the leading edge was 13 °. The wing was equipped with one spar and working trim. Cylinders with compressed air and an armored accumulator were also placed in the wing of the aircraft. The aircraft had a cruciform tail with a stabilizer, with lower and upper keels. The design of the aircraft empennage was all-metal, with the exception of the front edges made of wood and included a radio station antenna. 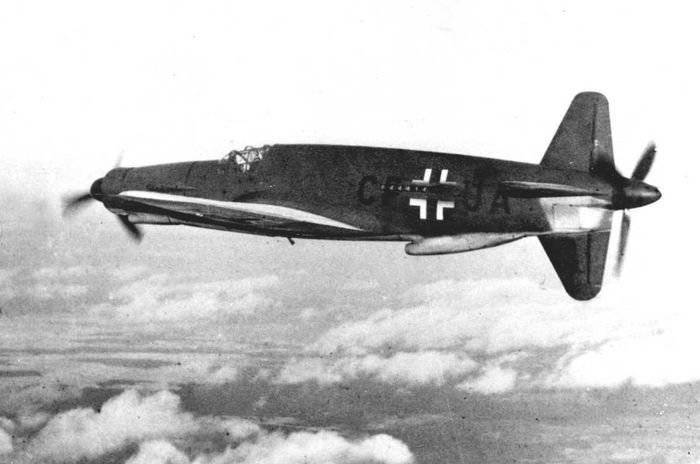 The Do-335 fighter's fuselage consisted of 4 parts: a cockpit with a compartment for cleaning the nose landing gear, a compartment with fuel tanks (in the two-seater version also a radio operator's cabin), a compartment of the rear engine installation and a tail section.

In the cockpit of the pilot, some of the instruments were located on the left and right instrument panels with a width of 300 mm. each. On the right panel was located the alarm panel of the work of the units of the motor units and the control panel of the radio station FuG-16. Also located here is a pilot emergency ejection lever. When bringing this lever into action, the top keel and rear propeller were fired, so that the pilot would not receive damage in a collision with them. On the left panel were located the control devices for the operation of the filler fuel pump with a shift lever to the rear and front engine. On the main instrument panel in front of the pilot, flight instruments were placed, which also provided the possibility of a blind flight.

A forward-downward view from the cockpit was provided at an angle of -5 ° to the horizontal; The view to the sides was good enough, since the cockpit was at the leading edge of the wing. In later versions of the fighter aircraft, the review was further enhanced by the use of cockpit blisters. The forward view, which was degraded by the curvature of the visor panels, was planned to be fixed in the future through the installation of flat panes. Behind the cockpit was a gas tank; its capacity in the double version was reduced due to the radio operator's cabin. Under the fuel tank was a bomb bay, in which the aircraft in the version of the night fighter (single or double) was placed additional fuel tank.

The metal wing of the trapezoid-shaped aircraft with rounded tips consisted of 2-parts. The approach to the butt-wing units was provided through special small-sized hatches. The main spar of the wing had a box section. On the leading edge of the wing of the Do-335 fighter, special knives were mounted for cutting the aerial barrage cables. At the leading edge of each of the two halves of the wing was a protected fuel tank with a length of 3 meters, which was installed in place through a special narrow long hatch located in the lower surface of the wing.

The cruciform tail of the aircraft was unusual. The stabilizer and the keel of the two-jet construction, the lower keel of the aircraft was equipped with a safety buffer, which was supplied with a shock absorber. The elevator controls are tough. In the emergency, the upper half of the vertical tail could be dropped (when the pilot was ejected from the cockpit). The landing gear was a tricycle, the nose landing gear was retracted to the front of the fuselage, back. And the wheels of the main chassis were retracted into the wing, but not completely. Therefore, the sash, closing the wheels of the main chassis, had punch. 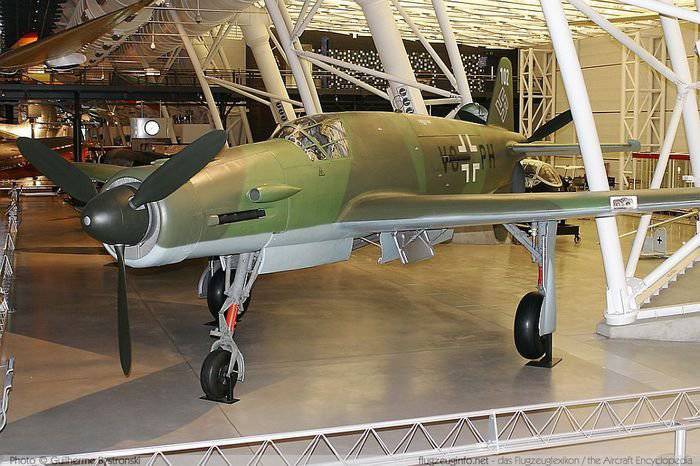 In September, 1944 in Germany managed to form a special part of Erprobungskommando 335, the main task of which was to conduct the Do-335 tests in combat conditions. Several Do-335A-0 aircraft and, possibly, Do-335A-1 were transferred to this part. The main task of the pilots was to develop tactics for the effective use of the aircraft in the role of a high-speed bomber, interceptor and reconnaissance aircraft. The commander of this squad was appointed captain Alfon Mayer. October 26 1944 of the year in the numerous anti-aircraft batteries of the Reich was sent a special order RLM, in which the anti-aircraft gunners warned of the appearance in the sky of a new German aircraft. In this order, the characteristic features of the new aircraft were revealed: the tandem arrangement of engines and the cruciform tail.

It is worth noting that the aircraft from the Erprobungskommando 335 did not so often come into direct contact with the allied aircraft. Only a few such cases have been noted. According to unconfirmed information in the autumn of 1944, one Do-335 aircraft was damaged by enemy fighters and made an emergency landing near Reims. Also confirmed the loss of one Do-335. 24 December 1944 of the year during the flight from Oberpfaffenhofen to Rechlin was lost Do-335А-08, the plane disappeared in the Donefeld area. The pilot of this car was killed, but the cause of the death of the aircraft remained unknown. It could be a meeting with the enemy's aircraft, and mechanical failure. Until the end of the war, the 2 pilot, whose fighters crashed in March and April 1945, became victims of the aircraft.

In the middle of April 1945, pilots of the Royal Air Force 3 th squadron, who flew Tempest fighters, were able to intercept the Pfeil Do-335 over the Elbe. The plane, which left them at high speed, was first discovered by French ace Pierre Klosterman. Later, pilots from the 325 th fighter group of the 15 th US Air Force, who flew the Mustang fighters, were able to detect it. In both these cases, the German car was able to easily break away from its pursuers. One of the Do-335 planes captured by the allies had signs of air victories on the casing, but it is very likely that these victories were won by the pilot even before he moved into the cockpit of this aircraft. 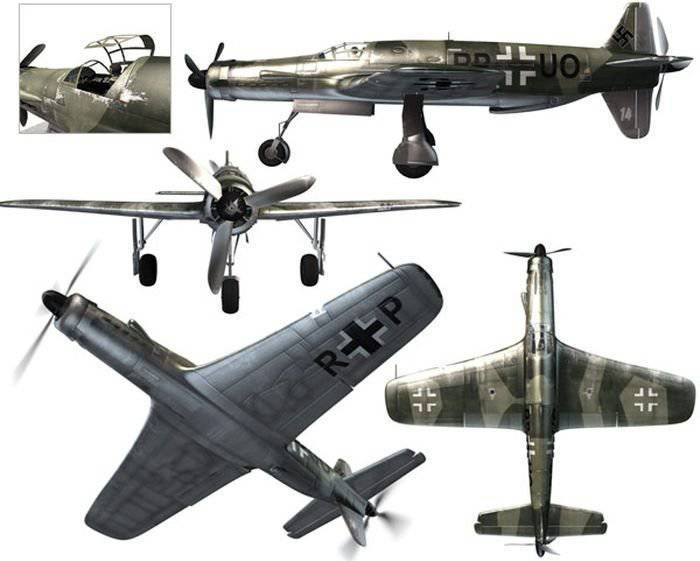 Flight technical characteristics of the Do-335-1: