July 4 2013
152
At the airport in the city of Nanchang, its first flight was made by the serial Chinese UBS - combat training aircraft JL-10 (Jiaolian-10), which previously appeared under the designation L-15. It is worth noting that this aircraft was created on the basis of the earliest drawings of the Russian Yak-130, and also used Ukrainian engines. Hongdu L-15 is a Chinese combat training aircraft created by Hongdu with the advice of the OKB Design Bureau. Yakovlev. The aircraft was designed to replace the outdated predecessor Hongdu JL-8. The new UBS is designed to train Chinese pilots for the latest Chinese Air Force fighters: Su-30, Chengdu J-10, Shenyang J-11 (copy Su-27) and Shenyang J-15 (copy Su-33).


The plane uses a fourfold redundant remote control system. In addition, it is implemented "glass cabin": in the cockpit is 6 multifunctional multi-colored displays (3 for each of the pilots). Also in the cockpit there is a collimator indicator. The dimensions of the car make it possible to place on it a modern radar with AFAR. The design of the L-15 25% was made of carbon composite materials, including flaps and tail. The estimated lifespan of the aircraft should be 10 thousand flight hours or 30 years of use. L-15 received a Ukrainian-made 2 turbojet AI-222-25F engine. The engines are equipped with an afterburner and modern onboard equipment, among other things, there is a digital engine control system.

Photos of the first production aircraft LJ-10 were published on the Chinese site CDJBY. In contrast to the previously demonstrated in public prototypes, the aircraft immediately stands out for its bright yellow color and the presence of the PLA Air Force distinctive sign on the fuselage. Earlier on the pages of the same resource, photographs of this aircraft were published in the air with explanations that the demonstration flight of the aircraft was made before the representatives of the delegation of the alleged African customer. According to some information, two African countries, Nigeria or Zambia, could order a new Chinese combat training aircraft, and a delegation of Chinese aircraft manufacturer Hongdu Aviation Industry Corporation (HAIG) recently visited Zambia. 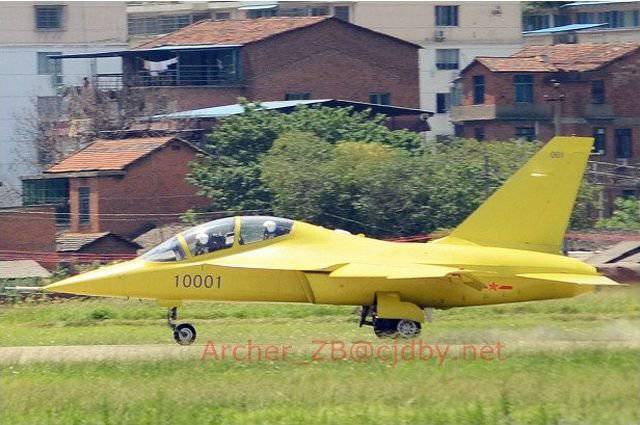 Representatives of Pakistan and Venezuela also announced their interest in acquiring UC L-15. Video recordings of the flight of the first serial L-15 combat training aircraft have not yet appeared on the expanses of the worldwide network, but the pilotage of this machine performed by its prototypes has been repeatedly demonstrated to the general public, including at well-known air shows.

According to the Chinese media, in recent years, the People's Republic of China was able to quietly receive large orders from Africa and Latin America for the supply of L-15 supersonic training aircraft. This message was voiced by Yang Liping, who is the chief economist at HAIG. At present, China occupies 75% of the global market for training aircraft, and TCB-type JL-8 is actively sold for export.

Back in 2012, the Chinese manufacturer was planning to supply one of 12’s foreign customers with this type of aircraft, and the importing country (or importers) was never named. The total cost of delivering an X-NUMX L-12 aircraft can be almost 15 million yuan, which can be approximately 960% of the company's total revenue (HAIG's total revenue in 54,79 amounted to 2011 billion yuan). However, the aircraft was not delivered in the 1,825 year. 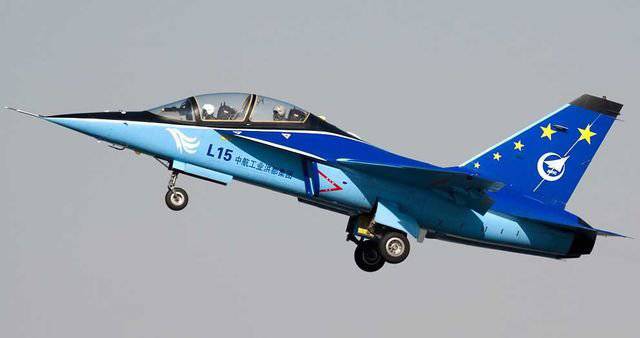 Yang Liping also told reporters that in the future, revenues from sales of combat training and training aircraft of all types will be 3 / 4 from all company revenues. Hongdu Aviation Industry Corporation intends to further increase the production of L-15 UBS, and also intends to take part in the release of Chinese-made C919 large passenger airliners and to produce some components for Boeing 747-8 aircraft in the framework of international cooperation.

As reported on the defense.pk forum, 29 June 2013, the first L-15 combat training aircraft was delivered to the first foreign customer (assuming that this is Zambia), at the same time, the PLA Air Force L-15 received the official designation JL-10 by replacing its predecessor JL-8. Due to this, the People's Republic of China joined a small “club” of states that produce supersonic combat-training aircraft belonging to a new generation. I am glad that among these countries there is Russia with the Yak-130, which is already in service with the Russian Air Force and the Algerian Air Force. In addition, South Korea - KAI T-50 has its own aircraft of this class. In addition, foreign orders were also received on the Alenia Aermacchi M-346 Italian combat training aircraft, which was built on the basis of the Yak-130. But a number of failures that befell the Italian car, including the plane crash in the 2011 year and in May the 2013 year, cast doubt on the realism of its serial production.

At the same time, the Russian Yak-130 was recently shown at the Le Bourget air show. This plane has already managed to order the Air Force of Belarus, Bangladesh, Vietnam and Syria. At the same time, the South Korean T-50 (not to be confused with the Russian 5 fighter-generation) want to get the Indonesian military, interest in this machine showed even in the United States. What are the prospects for the international arms market waiting for their Chinese counterpart? 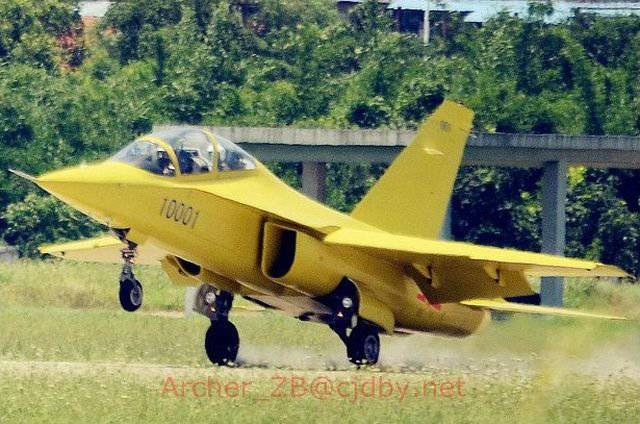 In the first place, this aircraft can hardly be called completely Chinese. In its external appearance, if desired, it is possible to consider similarities with the Russian Yak-130, and this similarity is not accidental: according to some information, in the early 2000-s, HAIG cooperated with the Yakovlev Design Bureau, and the Chinese engineers had access to Russian technical documentation. In addition, the LJ-10 aircraft is equipped with turbojet engines manufactured by Motor Sich Plant in Zaporizhia: these are practically the same AI-222-25, which are placed on the Yak-130, except for the fact that for the Russian UBS they are produced in Russia, and for the PLA Motor Sich supplies a version of the engine equipped with an afterburner.

The official flight performance of the LJ-10 training aircraft has not yet been disclosed. But according to The Military Today, it differs from the Yak-130 and T-50 planes with a lower maximum take-off weight (9,5 tons against 10,3 and 12,3 tons, respectively) and, presumably, significantly smaller radius of action (550 km. Against 1000 and 950 km. respectively).

Experts also note the fact that the Korean T-50 and Chinese LJ-10 have a maximum speed of more than Mach 1,4, while the creators of the Yak-130 intentionally refused to use a power plant with afterburners: a Russian aircraft can overcome the speed of sound, but it is not intended for long flights at supersonic speeds. At one time in an interview with the magazine "Aviation and Time "Arkady Gurtovoy, who is the deputy general director of the Yakovlev Design Bureau, noted that" in the process of training new pilots and the combat operation of a light combat training aircraft, supersonic speed plays a very insignificant role ", therefore, to reduce the cost of the aircraft, it was decided to limit its maximum speed to 1050 km / h 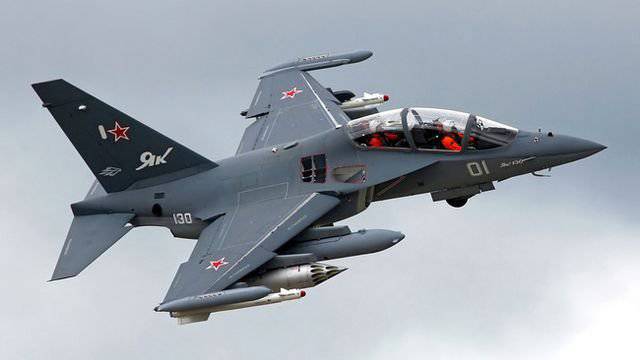 According to Arkady Gurtovy, Beijing deliberately “sped up” its LJ-10 at the request of the military, who wanted to see him as a full-fledged combat aircraft, but this approach is difficult to be considered reasonable. In any case, based on the Russian Yak-130, if necessary, you can also create a supersonic aircraft. This was stated not only by the representative of the Yakovlev Design Bureau, but also by the representatives of the Irkut Aircraft Building Corporation.

The prospects of the Chinese aircraft LJ-10 on the international arms market will determine only its final cost and convenience for its main function - the training of new pilots. Hongdu sees not only African states as main potential buyers, but also Pakistan, Venezuela, Egypt, Bolivia, Myanmar, and other countries that are already training their military pilots on Chinese training aircraft of the previous generation - JL-8.

Last year, the Chinese aircraft manufacturers said that they were able to create the cheapest plane in its class - its estimated cost was 10 million dollars. Thus, the JL-10 can be cheaper than the Korean T-50 (costs up to $ 30 million) and the Russian Yak-130 ($ 15 million). But with full confidence to talk about this price will be possible only after the start of deliveries of serial machines.

Ctrl Enter
Noticed oshЫbku Highlight text and press. Ctrl + Enter
We are
Chinese multipurpose fighter Chengdu J-10An-12 in Afghanistan
152 comments
Information
Dear reader, to leave comments on the publication, you must to register.