In 2008, the organization “Ugoimport SDPR” presented its project “Lazar BWT”. The new armored carrier was named in honor of Prince Lazar Khrebeljanovic, who ruled Serbia in the XIV century. Before starting the development of a new type of technology, the Serbian military and industrialists came to the conclusion that it was necessary to create their own project, since it could well influence the state of the country's industry, as well as improve its defense capability. In determining the appearance of the future armored personnel carrier, the engineers of SDPR's Import State decided to combine several recent trends in the field of light armored vehicles. It was assumed that the “Lazar BVT” could become the basis for several types of combat and auxiliary machines, as well as receive a set of protective measures inherent in MRAP technology. As a field of application of a promising BTR, patrols were seen in urban environments, as well as escort escorts. This had a great impact on the final look of the car. 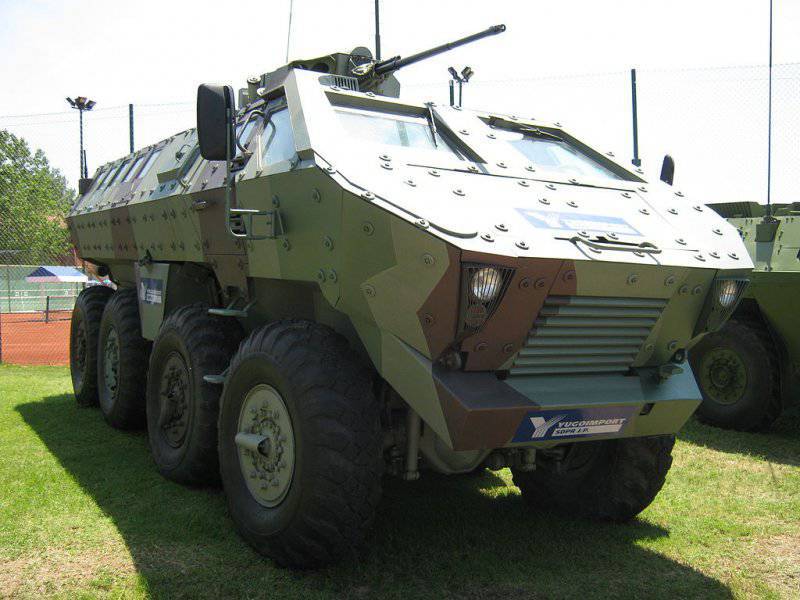 As the base for the new armored personnel carrier, the TAM-150 truck chassis was originally chosen. However, during the design work it became clear that the characteristics of such a running gear would be insufficient to meet the stated requirements. Chassis base truck significantly reworked. As a result, the Lazar BVT BTR received an eight-wheel all-wheel-drive chassis with hydraulic suspension.

On a deeply modernized truck chassis, an original armored body was installed with fairly good protection performance. The combat vehicle’s own armor provides level III protection according to the STANAG 4569 standard and withstands hitting the armor-piercing bullet of the NATO 7,62x51 cartridge. On the armored case, additional protection modules can be installed that correspond, as stated, to the fifth standard level (hit of an 25-mm armor-piercing projectile). The possibility of installing additional tools, such as anti-cumulation grids and dynamic protection systems, was also repeatedly mentioned. Their use under certain circumstances can protect the "Lazar BVT" and against anti-tank grenade launchers. The characteristic V-shaped bottom of the new combat vehicle provided protection for the crew and the assault force from the blast of a six-kilogram charge of TNT, which had been blown up under the wheel.

In front of the armored hull of the Lazar BVT armored personnel carrier is a 440 diesel engine with horsepower. This powerplant allows the 16-ton car to accelerate to the highway to 90 km / h and travel on one refueling to 600 kilometers. When installing a complete set of modules for additional booking, these figures are noticeably reduced, but this almost does not affect the overall capabilities of the machine, since additional panels are recommended for use in urban environments where high movement speed is almost not needed. 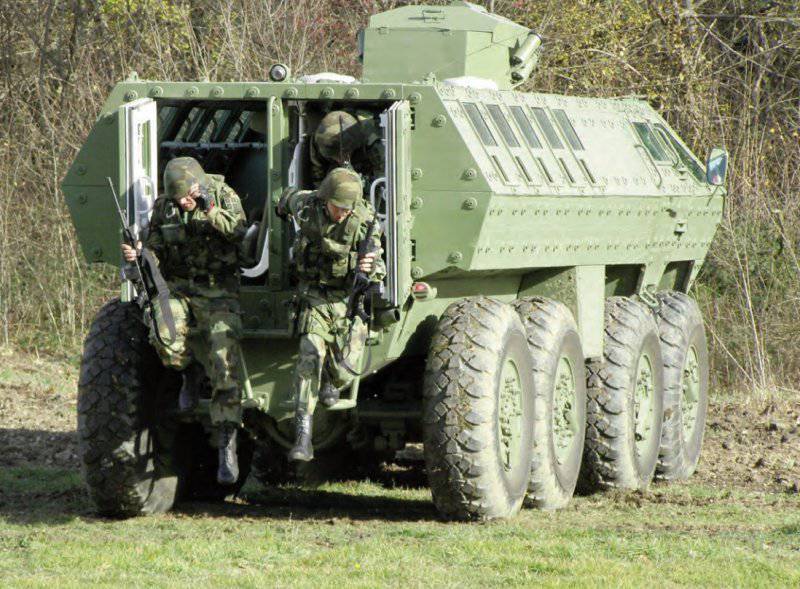 Immediately behind the engine are placed the jobs of the driver and the commander. To observe the terrain, the driver and commander have large front windows. Their bulletproof glass provides third-level protection for the NATO standard. To sit in an armored car and leave its commander and driver, both through the troop compartment, and through individual doors on the sides. The latter are located next to the seats and open forward. The level of protection of the doors corresponds to the indicators of the entire armored case, and the glass is slightly weaker than the frontal ones - level II in STANAG 4569. 12 windows of the troop compartment are made of a similar bulletproof glass: five on the sides and two on the rear doors.

Behind the department of management with the workplaces of the driver and commander on the Lazar BVT armored personnel carrier there is a volume intended for the installation of the combat module and the position of the gunner-operator of armaments. The proposed weapons options are mounted in a swivel turret and in some cases are equipped with a remote control. Machine guns of the 7,62 and 12,7 caliber of millimeters, 30-mm automatic grenade launcher, 20-mm automatic cannon or launcher for anti-tank missiles are offered as weapons of the armored personnel carrier. Smoke grenade launchers are also provided. 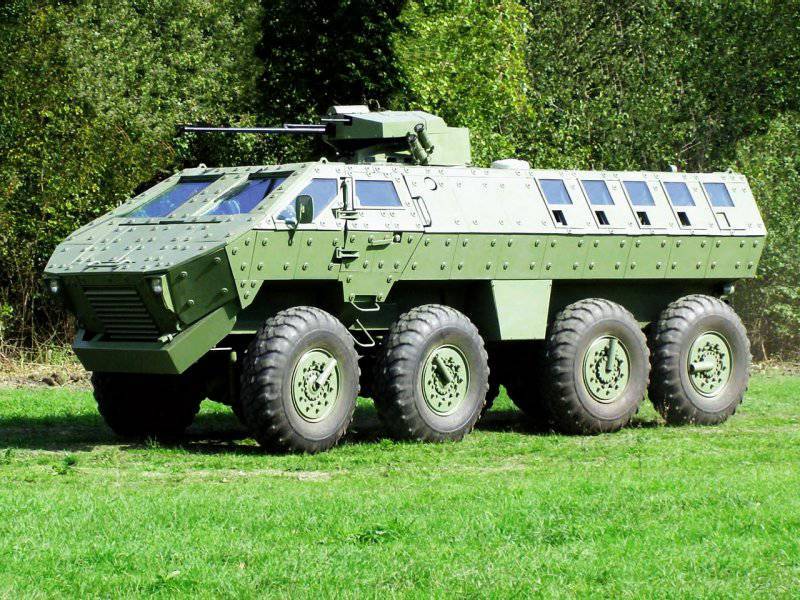 At the rear of the vehicle’s armored hull there is a large troop compartment, which occupies about half of the total length. It provides ten seats for the landing. An interesting feature of the armored personnel carrier "Lazar BVT" was their location: the fighters must sit in two rows, facing the sides. Such a layout of the troop compartment is not typical for armored vehicles of the MRAP class, but allows soldiers to fire from personal weapons through the embrasures in the sides. The loopholes covered by the flaps are located directly under the windows for observation. For landing and disembarking on the stern sheet of the armored hull there are two doors separated by a stand. Outside the case, under the door, there are footboards.

The Lazar BVT armored personnel carrier is equipped with communication and satellite navigation systems, a filter-ventilation unit and a number of other equipment. If necessary, the car can get a set of video surveillance for the terrain.

Serial construction of the first car line "Lazar" began in 2008 year, after which the Serbian armed forces received a number of such armored personnel carriers. Soon, Iraq expressed its desire to purchase these cars, but already in 2009, all negotiations ceased. According to some sources, last year Serbia sent several Lazar BVT armored personnel carriers to Bangladesh, but the exact number and amount of the contract is unknown.

Further development of the LAZAR BVT project eventually led to the emergence of the Lazar 2 prototype, which was demonstrated a few days ago at the Partner 2013 exhibition. Reportedly, the first model of the new armored personnel carrier was assembled at the recently opened Complex Battle System factory in the city of Velika Plana. In the future, probably the same company will be engaged in serial assembly. 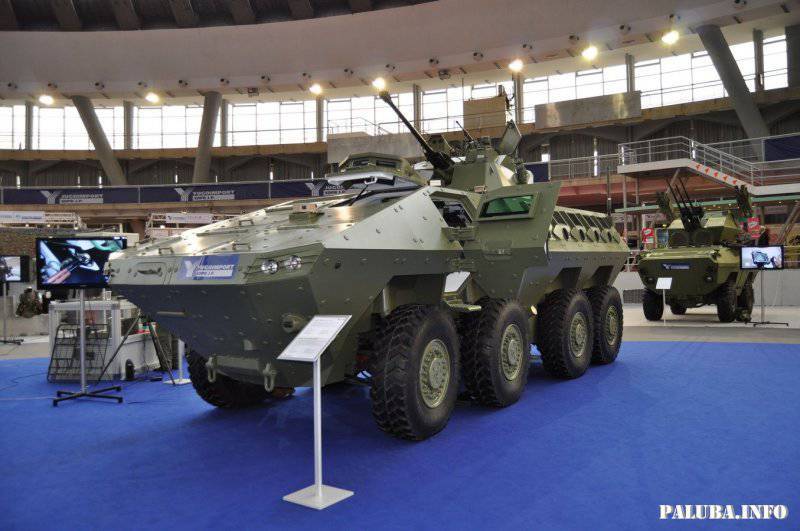 The general elements of the appearance and design of the new Lazar 2 armored personnel carrier basically correspond to the base vehicle. At the same time, the armored body of the updated version is several centimeters longer (its length is equal to 7400 mm) and much wider (2,75 m versus 2,4 m). The combat weight has also increased - now it is equal to 24 tons. In order to compensate for the increased weight, the engineers of the “UGOimport SDPR” had to equip an armored personnel carrier with a new engine, the 480 hp. Upgrading the power plant made it possible not only to maintain the driving performance at the same level, but also to slightly improve it. So, the Lazar 2 accelerates onto the highway to 95-100 kilometers per hour, and the cruising range has grown to 800 km. The capacity of the armored personnel carrier remained the same - its own crew of three people and ten paratroopers.

Tests of the first armored personnel carrier Lazar BVT showed that its protection under certain circumstances may be insufficient. For this reason, the Lazar 2 carries more powerful armor, corresponding to level IV of the STANAG 4569 standard. In addition, the head part of the machine has undergone significant refinement. Instead of an inclined frontal sheet with glass, a new plate with a greater thickness and with fewer technological holes is installed on the new armored personnel carrier. Now, instead of the driver's windshield, there is an armored hatch with observation devices. The same applies to the workplace commander.

The sample on display at the exhibition carried a new gun turret developed by Zastava. A combat module with an 30-mm automatic cannon, created by the same company, can be made both in the manned version and in the version with remote control. Also on the tower you can mount a machine gun caliber 7,62 millimeter and launcher for anti-tank missiles. The troop compartment of the combat vehicle did not undergo any significant changes, in addition to equipping the inner surface of the sides with anti-splinter podboy. Inside the troop compartment can still go ten fighters with weapons.

On the very first day of the Partner 2013 exhibition, Serbian Minister of Defense A. Vucic said that a contract had already been signed for the supply of three Lazar 2 armored personnel carriers to Pakistan. According to some sources, after this, the Pakistani military will acquire another dozen armored vehicles. It is also mentioned that Pakistan at one time took upon itself part of the financing of the development program of the new machine. As reported by the Serbian press, other third world countries are showing their interest in the new armored vehicle, but at the moment only one contract has been signed - with Pakistan. 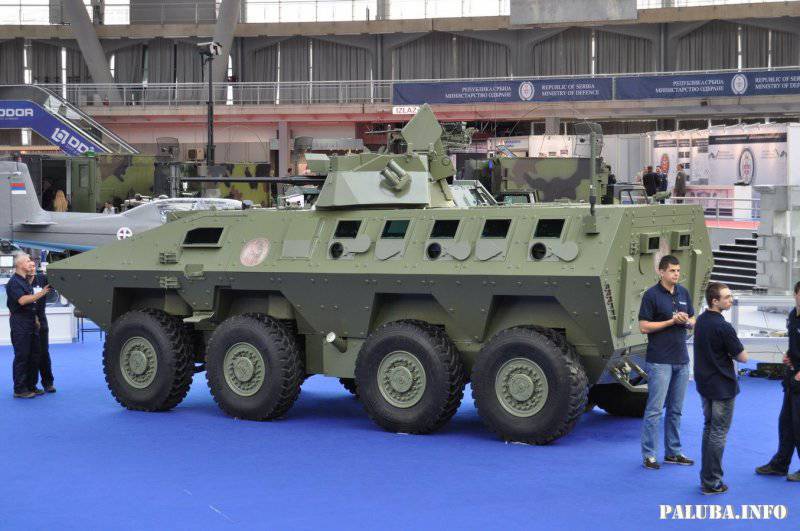 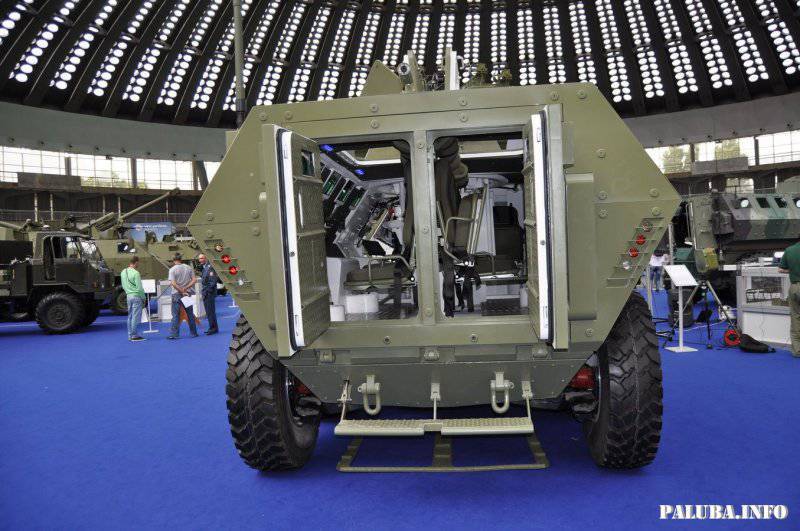 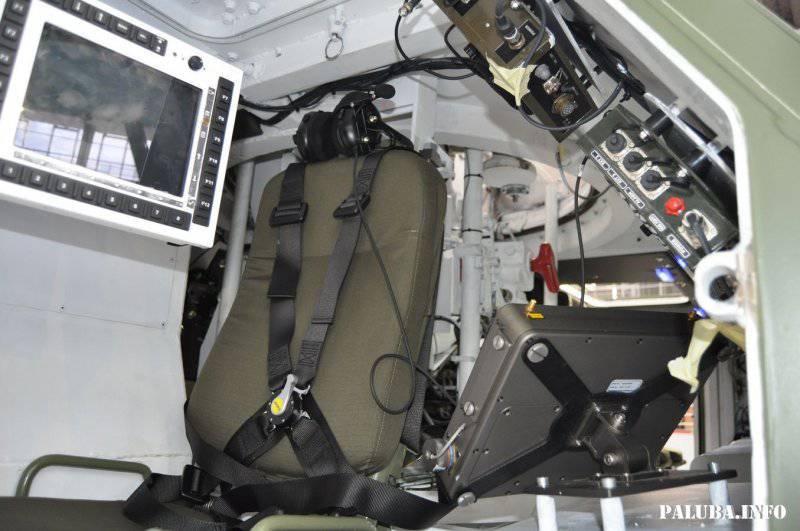 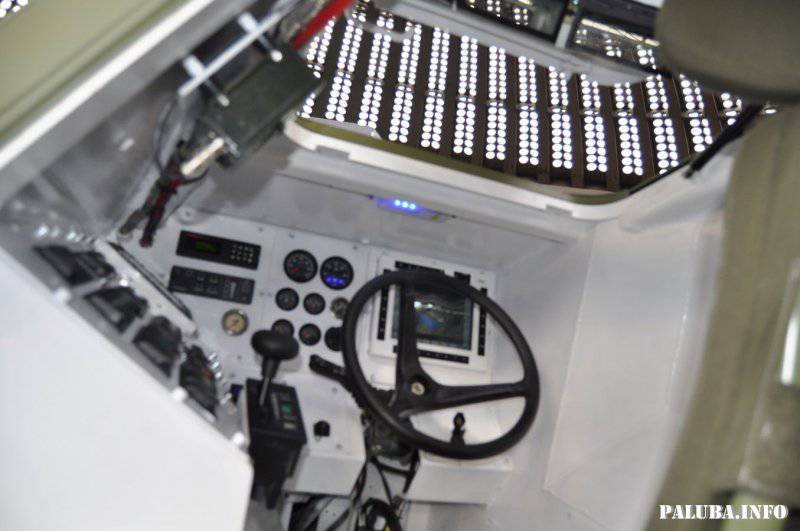 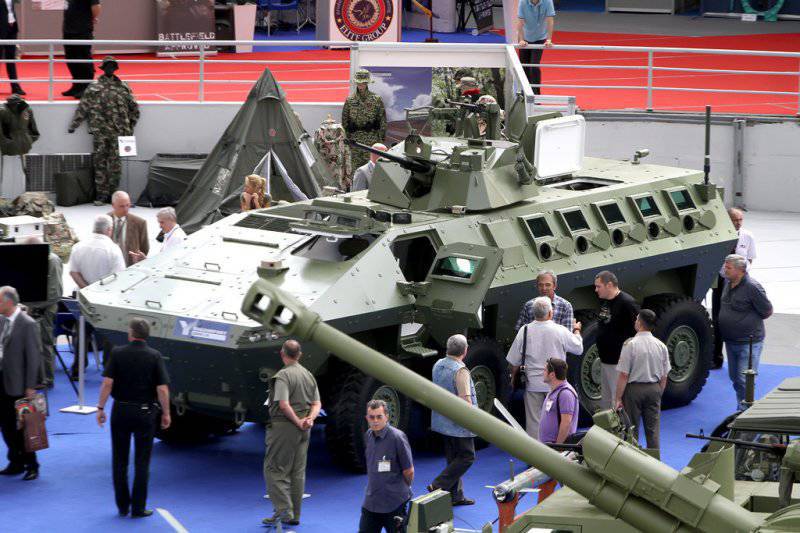 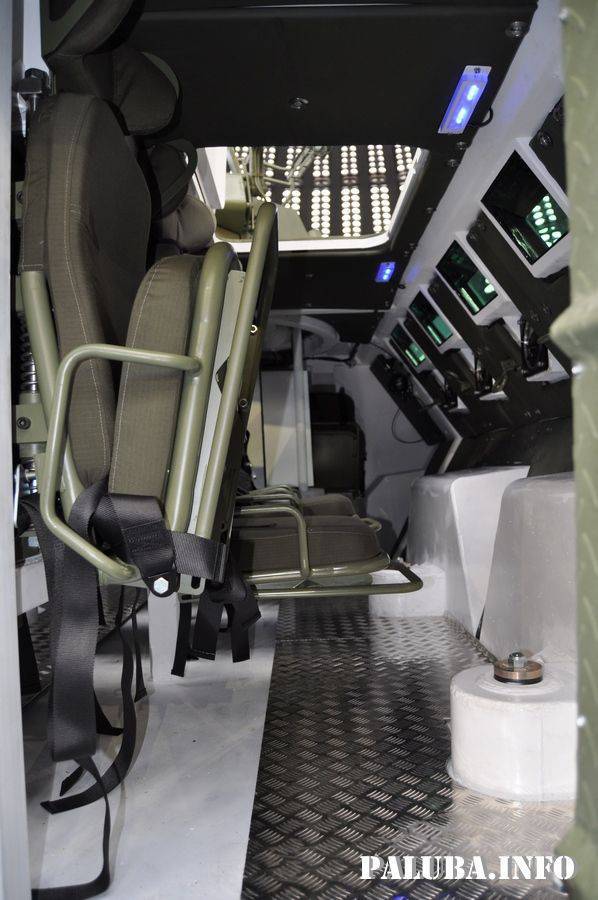 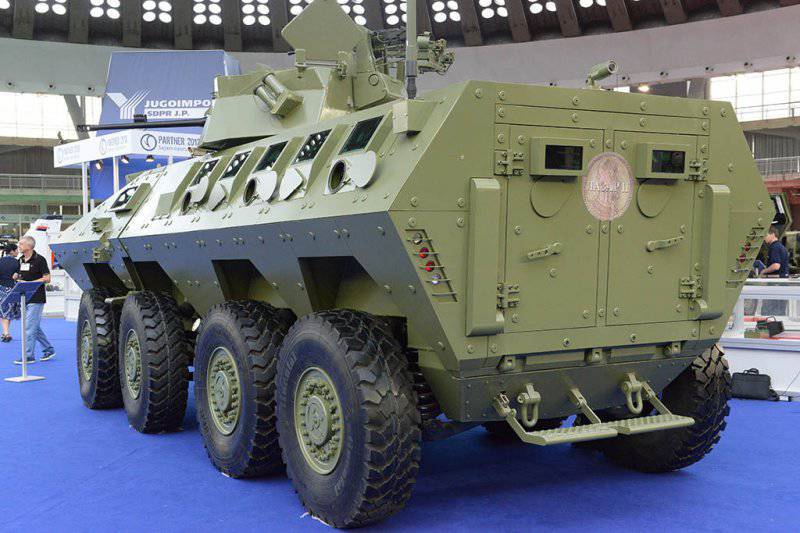 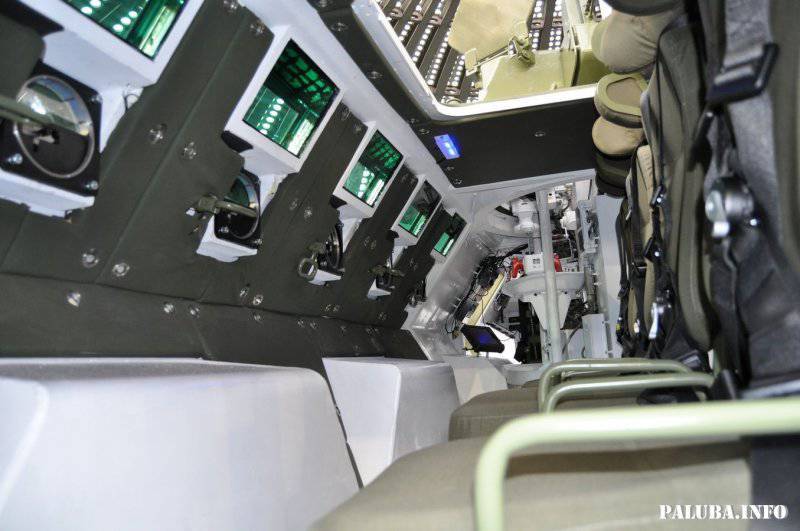