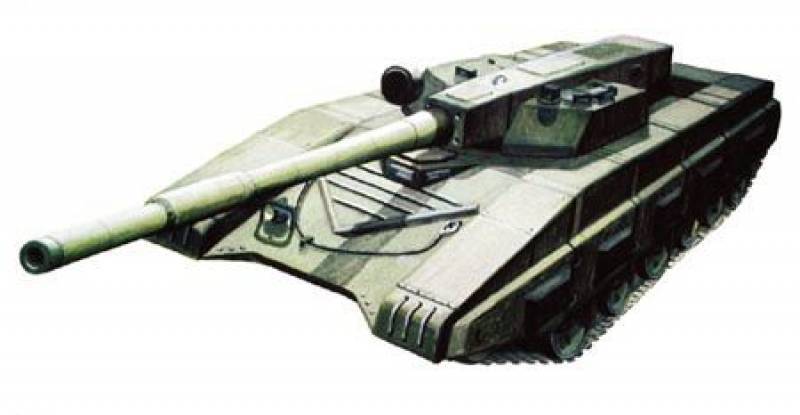 At the end of September this year at the XI International Exhibition of Arms, Military Equipment and Ammunition in Nizhny Tagil REA-2013, a closed display of a full-scale perspective model will be held tank "Armata". The developer of the tank is the Design Bureau of OJSC Uralvagonzavod. Design work has been ongoing since 2011. The planned deployment date is 2015.

The latest development of Uralvagonzavod (UVZ), the Armata tank, will not be presented at the upcoming exhibition in September in Nizhny Tagil due to the secrecy of this development. About this at a meeting in the government dedicated to the organization of this exhibition, told the news agencies the director general of the UVZ Oleg Sienko.

According to reports by representatives of the Russian Ministry of Defense, the Armata will weigh up to 50 tons, a running gear with six track rollers and a smooth-bore 125 mm caliber gun with remote control. The layout of the hull is classic - the nose compartment of the control, the central combat compartment and the aft engine-transmission compartment. The crew is located in the control compartment in a specially protected module, separated by an armored barrier from the uninhabited fighting compartment and the tower. The tank will be equipped with tandem dynamic protection of the new generation “Malachite” and the active protection complex “Afganit” with millimeter-wave radars.

Despite the novelty of the project of the new armored platform, “Almaty” has historical prototypes. 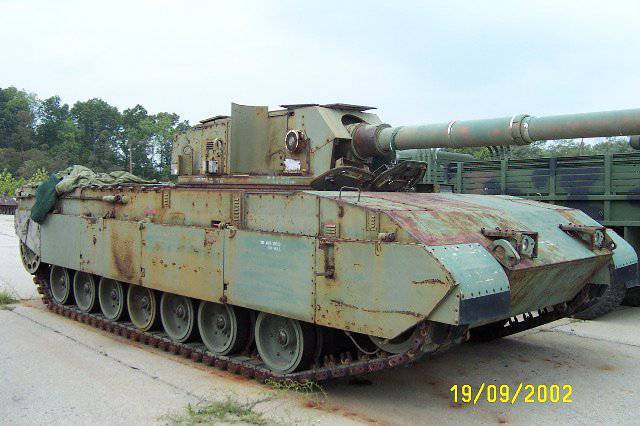 First of all, this is one of the variants of the experienced tank “Object 292”, developed at the Design Bureau of the Kirov Plant in the 1991 year. A crew of three was housed in an armored nasal module. As a weapon was used gun installed in the casemate tower above the uninhabited fighting compartment. The shots in the carousel loader were placed in a vertical position. In contrast to the Armata project, a pilot with seven pairs of road wheels and a rifled 152 caliber gun were used in an experimental tank. The estimated weight of the “292 Object” was on the order of 60 tons. 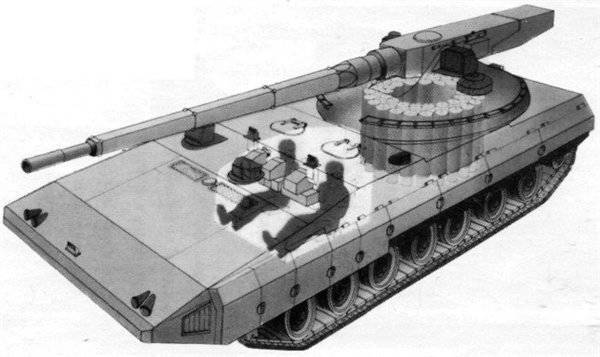 Secondarily, it is an experimental tank "Object 187", developed at the Design Bureau of Uralvagonzavod in the 1988 year. Unlike the base model T-72, it had an elongated body while maintaining the chassis design with six pairs of road wheels, which helped significantly increase the size of the control compartment, place the driver’s observation devices on the roof of the body and eliminate the weakened reservation zone in the upper frontal part.

The length of the hull without fenders was equal to the 7,2 meter, width - 2,17 meter. Overall width of the tank without side screens was 3,12 meters.
The main engine used was an X-shaped diesel engine A-85-2 with 1200 horsepower, which, together with the elongation of the track surface, increased the combat weight of the tank to 50 tons while maintaining a high level of power supply and relatively low ground pressure. Hydraulic volumetric transmission was used in the transmission. The caliber of a smooth-bore gun 2А66 was 125 mm, the shots in the carousel automatic loader were located in a horizontal position.

The only thing that is not represented in the sketch is the mounted modules of composite armor on either side of the tower’s casemate (according to the type of reservation of the turret of the Merkava Mk.4 tank). It seems that this is exactly what the future Armata tank will look like.

Unlike the general layout of the Armata, its armament and main equipment are not represented by prototypes, but by fully developed samples.
First of all, it is a diesel engine A-82-2 produced by the Chelyabinsk Tractor Plant. The X-shaped four-stroke water-cooled diesel engine under the title 2В began to be developed at the beginning of the 1970-s. Engine power varied from 300 HP (4 cylinder) to 1600 hp (16 cylinders). The latest 2B-16-2 engine in the version with lowered to 1200 hp capacity planned to install a new tank T-80. The 2В-16-2 engine was incorporated into a single monoblock - the MTU-2 engine and transmission unit, which consisted of a diesel engine, hydrodynamic transmission, electro-hydraulic control system, cooling system and air filters. Monoblock occupied volume in 3,6 cubic meters. During the T-80 maintainability check, a team of four was able to replace the candy bar in 65 minutes. 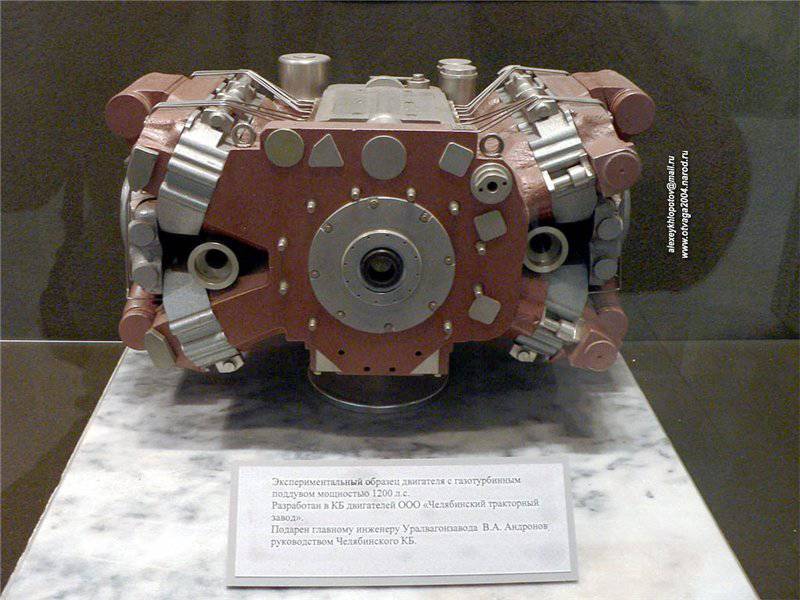 However, the leadership of the Soviet Armed Forces made a willful decision to launch a T-80 series with a gas turbine engine, which at that time seemed more promising.

In 1988, the 2В-16-2 diesel engine and the MTU-2 installation were recommended for serial production and used as part of an experimental 187 Object tank, after which all documentation went into the archive. In the 1990s, the Ministry of Defense of Russia attempted to preserve the family of X-shaped diesel engines. Chelyabinsk Tractor Plant ordered the modernization of a unified power plant. As a result, a unique 12-cylinder engine with a factory designation 12H360 (12ЧН15 / 16), equipped with gas turbine supercharging and intermediate air cooling, was created. Maximum engine power is 1500 HP at 2000 revolutions per minute and weight 1550 kg, Dimensions 12Н360 -: length 81,3 cm, width 130 cm, height 82 cm. 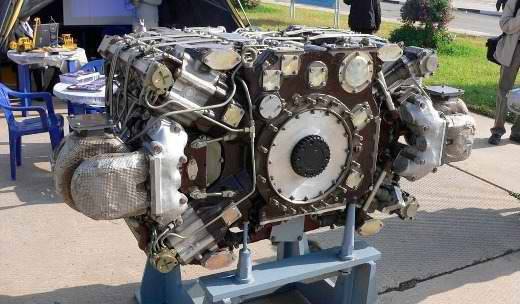 Special attention should be paid to the small length of the engine, for the first time in the practice of domestic tank building, allowing to place the fuel tank inside the engine compartment following the example of the Leopard 2 tank, completely eliminating the danger of fuel ignition in the habitable control compartment.
Also of considerable interest is the new 125-mm smoothbore gun of increased ballistics 2А82 developed by OJSC “Plant No. 9”. The gun has an elongated barrel and an enlarged charging chamber, which makes it possible to effectively use promising armor-piercing feathered sub-caliber shells of increased power with a uranium core of the “Lead-2” type. The muzzle energy of the gun is at the level of the muzzle energy of the 120-mm gun Rheinmetall L55, installed on the latest modification of the Abrams М1 А2 SEP tank.

Created for А282 new carousel automatic loader almost retained the dimensions of the former, used with the 2А46 gun in T-72 and T-90 tanks.
As the fire control system of the tank gun on the prototype of the Armata tank, the Kalina SSM (installed on the T-90MS tank) manufactured by the Belarusian JSC Peleng will be used, including the multispectral panoramic observation device of the Commander Falcon Eye and the combined aiming sight of the SOSNA-U PNM gunner, a digital ballistic computer and a set of sensors for firing conditions, providing a target range with a direct shot to 7 km at any time of the day in fog, dust and smoke conditions aves. 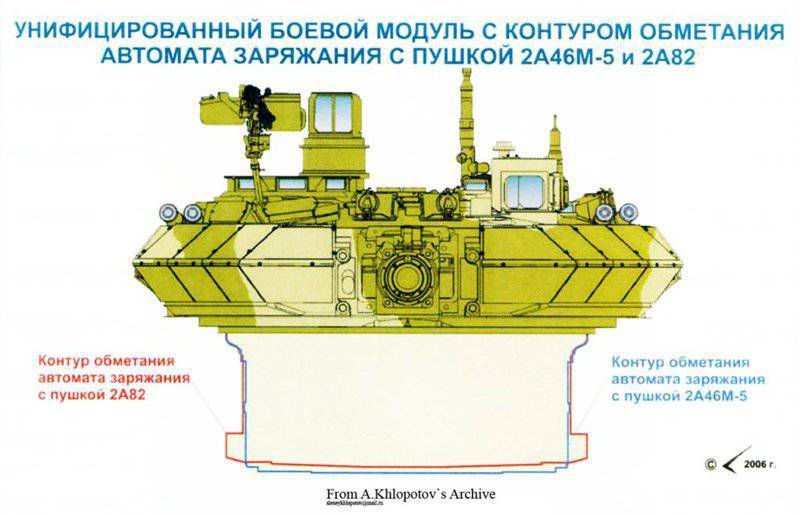 The Kalina SUO is integrated into the automated control system of the tank battalion. The equipment of the system for setting up aerosol and smoke screens and the automatic identification of "friend or foe" is connected to the MSA. Information exchange is carried out via a multiplex channel in accordance with the GOST R 52070-2003 protocol (the Russian equivalent of the American military standard MIL-STD-1553) in real time. 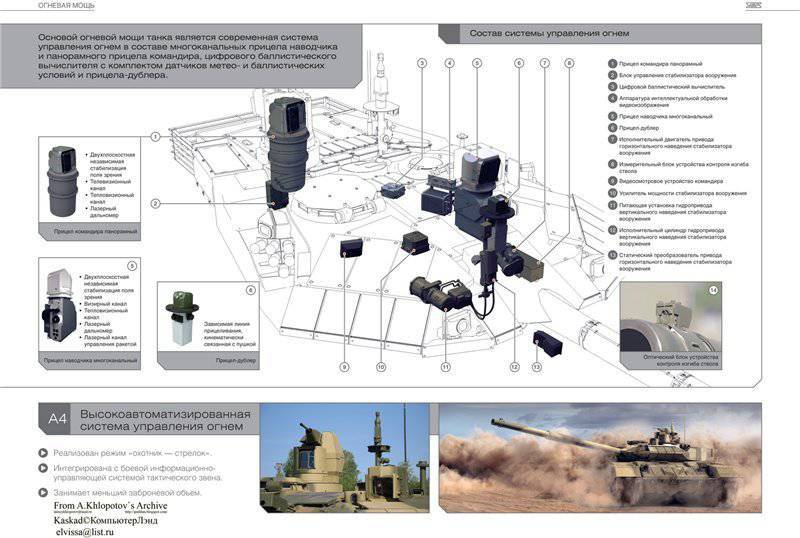 The most important difference between the Kalina SUO and previous domestic developments in this area is the ability to auto-follow the target after it is selected by the commander and captured by a computer system until the shot is fired (realization for one crew member of the combined hunter-gunner function). 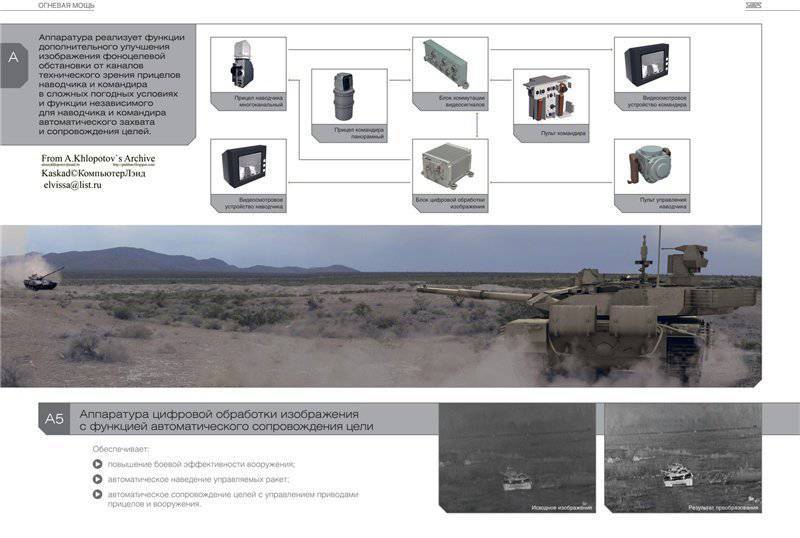 In addition, the presence of a large number of thermal imaging cameras connected to the SLA provides all crew members with a view from the tank in the vision mode. 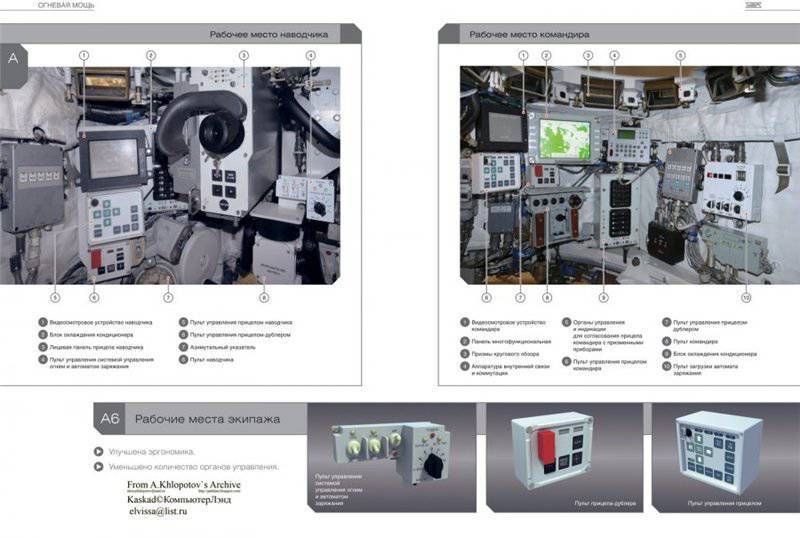 The number of the crew of the tank is one of the main parameters that determine the armor volume and, consequently, the degree of protection of the tank (the ratio of armor weight to the armor volume). Currently, the T-90 tank (11 cubic meter) is the leader in this parameter, the Abrams MXXUMX A1 SEP tank (2 cubic) has the average index, the Merkava Mk.18 tank (4 cubic) is in the last place. m). The degree of protection directly depends on the survival rate of the tank on the battlefield.

The use of an automatic loader on Soviet T-64, T-72 and T-80 tanks made it possible to abandon the presence of a loading crew. The transition to an uninhabited fighting compartment in combination with a target tracking machine allows you to additionally abandon the gunner, which will reduce the volume of the control compartment while building comprehensive protection for the crew’s armored capsule. The consequence of this should also be a change in the organizational and staffing of tank units (similar to aviation) by increasing the number of military personnel and equipment providing maintenance, repair and evacuation of tanks, as well as their supply of ammunition and fuel.

Another necessary solution should be the inclusion of the automated complex for searching and detecting targets, consisting of devices with radar, thermal imaging, laser and acoustic channels, using unmasking signs of targets (moving on the ground, natural radiation of heat, operation of laser and infrared instruments, flash and the sound of a shot, the noise of the engine and chassis). Such a complex will be able to process and transfer to the commander’s display the necessary information for making a decision on hitting the target, followed by automatic tracking of the target, loading the gun and aiming it at the target with all necessary amendments to the shooting conditions.

The source of information:
Yu.M. Apukhtin, A.I. Mazurenko, E.A. Morozov, PI Nazarenko. The problem of reducing the number of crews of the main tank. "Bulletin of armored vehicles", No. 6 for 1980,