Railgun: perspectives of a magnetofugal gun

28 2013 June
13
Did the Russian scientist Boris Semenovich Jacobi think in the 19th century? having invented a purely peaceful linear electric motor, that his invention in one and a half hundred years will be considered as the most promising weapon XXI century.


The linear electric motor was first used in military affairs as early as 1895 by an Austrian engineer, F. Geft, who suggested launching “spaceships” to the moon using an electromagnetic gun (railgun, as such guns are called abroad), which would accelerate the “projectile” to the required speed in the solenoid barrel. However, it did not go further than the idea, since with the development of technology at that time this project was not feasible. Norwegian K. Brickland, apparently, was the first to realize that such a cannon can be fired not only with space ships at the Moon, but also at targets on Earth. In 1901, he filed a patent

application for electromagnetic gun. Scandinavian 1915 was followed by Russian engineers N. Podolsky and M. Yampolsky, who offered the government a project of an ultra-long electromagnetic tool that could send a projectile to 300 km. However, the Artillery Committee of the Main Artillery Directorate of the Russian Army considered that the proposal was premature. And where to find a power station, which will always be near the instrument?

In 1916, French engineers Fachon and Willeple managed to design a working model of the gun, which accelerated the model of an 50 g projectile to speed in 200 m / s, but the work soon had to be curtailed - the creation of a full-sized instance turned out to be insanely expensive and complicated. 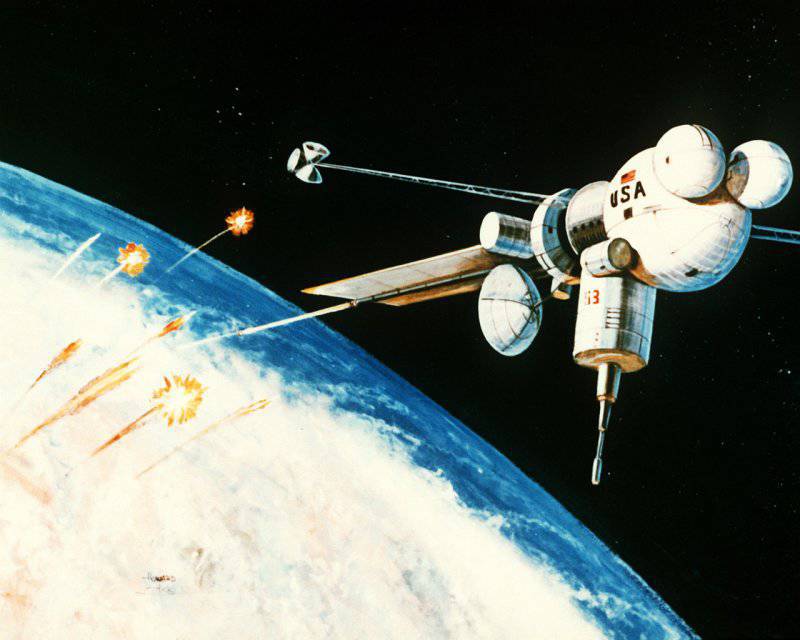 Today, the US military is considering the possibility of installing an electromagnetic gun on space near-earth apparatuses

“In order to further lengthen the gap, which should be accelerated, there is theoretically the possibility of constructing an annular tunnel consisting entirely of solenoids,” wrote German engineer Max Valle, who also took on the design of such a weapon, in 1935.

In such a tunnel it would be possible to force the grenade to turn until it acquires the necessary speed so that during the last treatment by rearranging the "arrow" to send it to the tunnel spur, leading on a tangent, which in this case would play the role of the upper end coiled in a ring electromagnetic gun. Of course, in this case, the air from the ring of solenoids would have to be pumped out, and the trunk process located at the tangent would have to be closed with an airtight cover. With a sufficiently large radius of curvature, there is a theoretical possibility of carrying out such a circular flight of a grenade. Practically, the difficulties lie mainly in the need to overcome the resulting enormous centrifugal force and the impracticability of the “turnout switch”, as a result of which this plan, attributed to the April issue of the French magazine “Je sais tout” (“I know everything”) for 1927. prominent French engineers Masu and Drouet, have to admit impracticable. "

However, this conclusion did not prevent the American inventor Virgel Rigsby in the early thirties to build two working electromagnetic machine guns. The first one received energy from a conventional car battery, and at the expense of 17 magnets, it accelerated bullets along the 33-inch barrel. From where he took the second current, it is not known, but he could spit out 44-caliber bullets (according to other data - 22-caliber) with a speed of 121 m / s. The plans of the inventor as a primary task was to increase this value to 914 m / s. The declared rate of fire was 600 rds / min, although for some reason the weapon at the demonstration fired at a rate of 7 rds / min. Apparently, the whole thing was in the insufficient power of the "batteries", because the idea of ​​a pu-lemeta-railgun did not find a single or any other design in the souls of the American military. 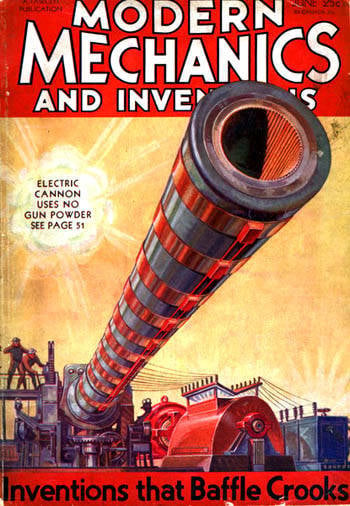 This seemed to be an electromagnetic gun in the middle of 20's. last century 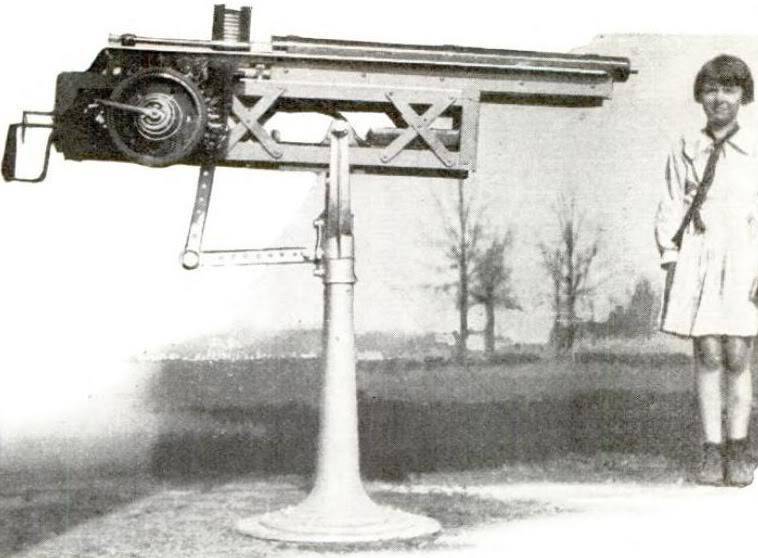 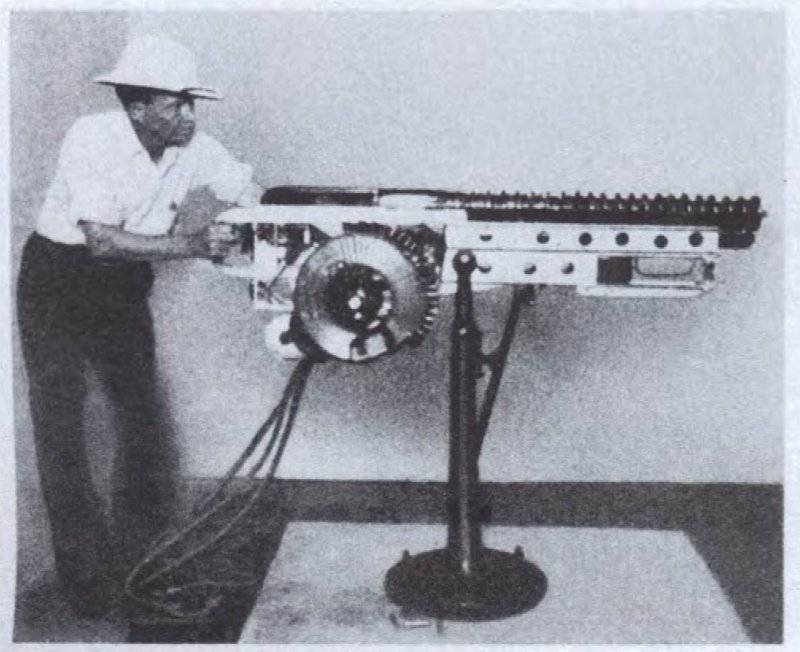 The second model of the electromagnetic machine gun Virgela Rigsby

Soon after the October Revolution, a magnetic bureau was created in Soviet Russia, which was engaged in the creation of an electric gun. At the Committee on Inventions, specialists of the Commission of Special Artillery Experiments (KOSARTOP) tested two samples at once: a magnetofugal (electromagnetic) alternating current gun and an electric gun with direct current. Soon, the Artillery Committee of the Main Artillery Directorate recommended that engineers “start designing electric DC power tools with a 3-inch field gun. There are many favorable circumstances for doing this. ” However, soon KOSARTOP was dissolved, and work on this topic was discontinued.

During the Second World War, engineers in Germany and Japan also worked on the creation of an electromagnetic gun according to the principle of a linear electric motor, in which the role of an anchor was assigned to a projectile. The greatest success was achieved by the German scientist I. Hensler, whose model was able to tell a small projectile the initial speed 1200 m / s. However, fortunately for the allies, neither the full-scale model, nor, especially, the production model of Hensler had time to create.

“Electric tools represent many benefits: long range, expressed in hundreds of kilometers; a shot almost without sound, without smoke and fire; the absence of transverse pressure during firing makes it possible to design an electric gun without a steel thick pipe, as in modern guns, - wrote in 1938 in his book “Russian artillery in world war” E.I. Barsukov. - When fired, the electric tool is not exposed to high temperatures and therefore can be durable; the live power of the projectile is greater than when firing a powder charge, since electromagnetic forces act throughout the mass of the projectile, and not just at its bottom, as happens when a powder charge is fired; rate of fire may be higher than that of ordinary guns, rollback - less. 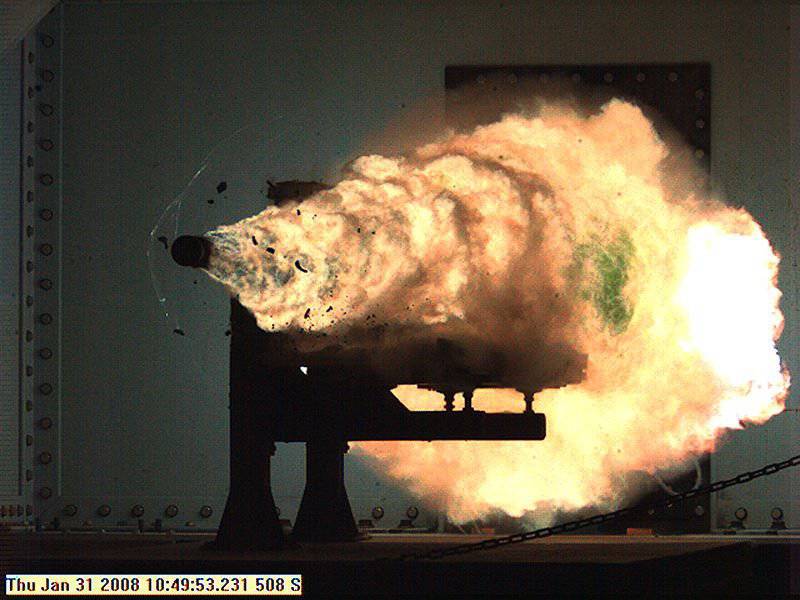 Flight of a projectile fired from an electromagnetic gun at the US Navy test site in Dahlgren, 2008 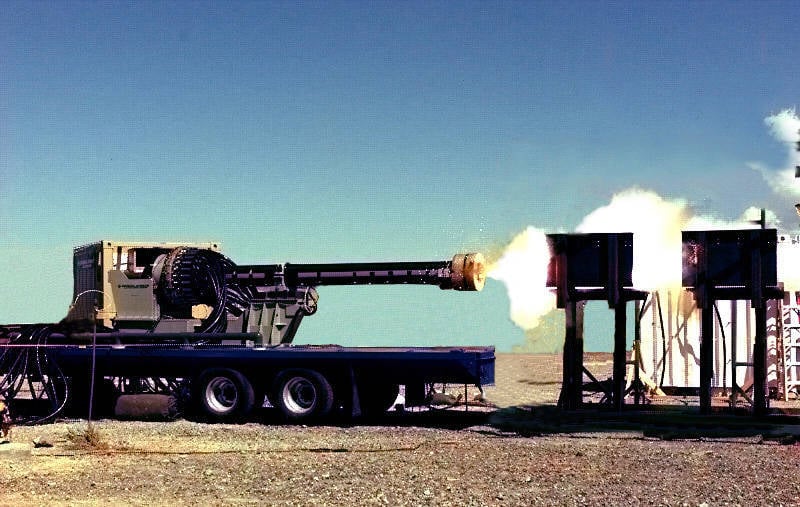 All this is true, and electric guns have only one, but a very significant drawback - they require the cost of millions of kilowatts of electricity just before each shot, for the accumulation of which you need a whole powerful power station.

Nevertheless, electric tools, especially those built on the principle of creating an in-the-barrel of a magnetic wave that carries a projectile, probably belong to the future. The range of these guns will depend on the power of the source of electricity and therefore can increase to a huge size, with very little wear tool. The flight range of the projectile will have to be adjusted by selecting the proper amperage. ” Well, it should be noted that E.I. Barsukov was quite right back in 1938.

Currently, designers have come close to equipping modern types of military equipment with electromagnetic guns. So, in the mid-90s. of the last century, General Dynamics Land Systems and the US Army’s armored directorate proposed several options for the further development of the main combat tank M1 Abrams. One of the main innovations was to be the installation of a reserved remote-controlled gun instead of a turret, which, along with the traditional smooth-bore gun, also includes automatic 25-mm and 35-mm electromagnetic guns, each of which has a muzzle energy of 30-40% higher than the same an indicator of conventional tank guns.

Moreover, on January 31, 2008 at the surface weapons research center fleet The U.S. Navy in Dahlgren, Wyoming, tested an electromagnetic gun, which has been under development since 2005. As a result, the kinetic energy of ammunition, dispersed to 21000 km / h (about 6 km / s) in 0,2 s, exceeded the estimated 10 MJ, and the range was 370-400 km. The gun will be equipped with a GPS corrector, which will not allow the projectile to deviate from the aiming point by more than 5 m. It should also be noted that the gun was tested only for a third of its rated power (32 MJ), and in the future it is planned to achieve a power of 64 MJ

However, such a powerful gun requires a large amount of electricity - the current required for the shot is 6 million amperes. Consequently, only a ship can serve as a suitable platform - for example, the advanced destroyer DDG-1000, equipped with a gas-turbine power plant with a capacity of 72 megawatts. Despite the fact that the intensive shooting (more than six shots per minute) due to power consumption threatens to lose speed in battle, American experts are confident that the electromagnetic weapon - the future. 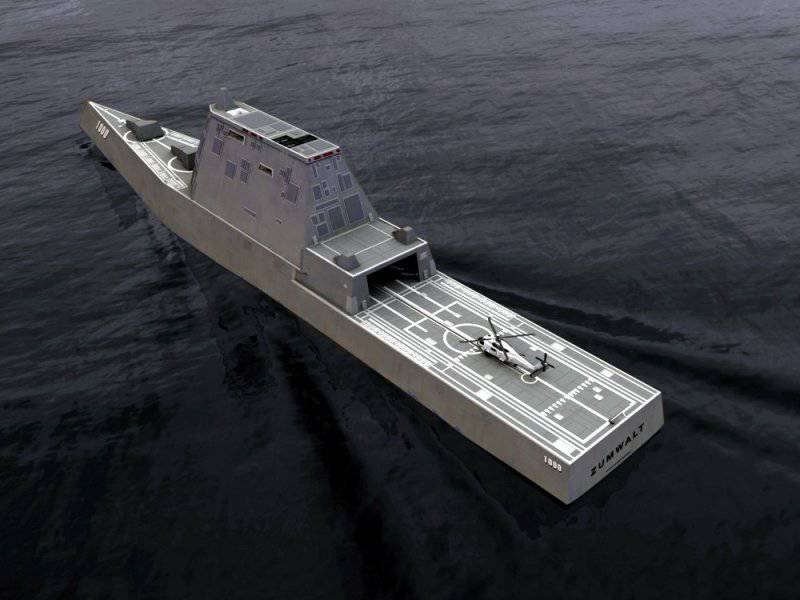 The prospective destroyer DDG-1000, equipped with a gas turbine power plant with a capacity of 72 megawatts, is considered the most likely carrier of an electromagnetic gun

Ctrl Enter
Noticed oshЫbku Highlight text and press. Ctrl + Enter
We are
Railgun predecessorsNASA: "How We Get Back To The Moon"
Military Reviewin Yandex News
Military Reviewin Google News
13 comments
Information
Dear reader, to leave comments on the publication, you must to register.