24 2013 June
36
As has been said repeatedly, manual firearms weapon at the moment it is in a dead end, and those options that are offered by the designers are either too expensive or not adapted to translate into a full-fledged reliable sample. As a result, at the moment designers are crumpled in place, continuing to develop ideas that have already been worked out. Directions in improving the characteristics of the most diverse. Some seek to make their weapons more accurate, others are lighter, others, like the others, are chasing other characteristics, in general, everyone does everything to make the weapon more efficient and reliable, sometimes forgetting common sense. But there are those who find simple and, most importantly, cheap solutions that can significantly improve the effectiveness of weapons, although the belief that such solutions will be useful on the battlefield, I personally have great doubts. Nevertheless, we will try to get acquainted with one of the simplest solutions, which, despite its obviousness, began to be mass-produced quite recently, although the idea itself has long been found. 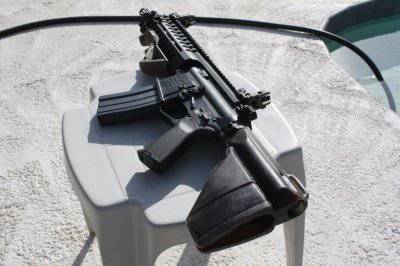 As you know, the most unpleasant phenomenon when firing is recoil, especially significantly affecting the efficiency of automatic fire. Fighting it all in different ways. One of the most fashionable solutions at the moment is a system with balanced automation, but, alas, the price for an ideally working sample is too high, and a cheap option cannot provide a long service time. The proposed solution not only provides less impact on the accuracy of fire, but also allows you to use a weapon using only one hand, however, it becomes occupied with a weapon and virtually useless, since it will be very difficult to get rid of the weapon.

But let's not beat around the bush, the solution turned out to be the replacement of the butt of shortened versions of the AR-15, and accordingly of the M-16, as well as other models of weapons built on the basis of these samples. Instead of a standard butt, a slightly different element is installed, consisting of two plastic plates, between which the forearm of the shooter should pass. Since the whole thing is fixed, the weapon will actually become a continuation of the hand, respectively, it is now possible to shoot with one arm extended without using the other, and the recoil will go into the shooter’s hand. Throwing the barrel when shooting is virtually eliminated, although it still needs to be done with effort, but for the civilian market, that is, for a single shooting with a practically-fledged rifle you can use it as a pistol. 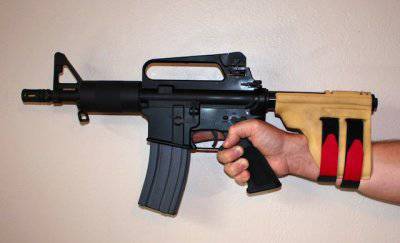 Of course, the idea of ​​such an articulation of a gunner with a weapon is interesting, but it personally reminds me of inventions by foreign directors, something like a machine gun instead of a stripper’s prosthetic leg (I don’t remember in which next delirium I saw such a solution). Like it or not, such an addition is not as good as it may seem. On the one hand, it is possible to fire using only one hand, on the other hand, this person actually loses this hand, so this is more a device for fun than for real combat use. Even if one of the hands of the fighter suffered, then he, as one of the movie characters, is unlikely to be able to tie the butt to his forearm to continue the fight, because in reality you also need to reload the weapon, and the pain significantly reduces the desire to fight, although someone like here it depends on the person.

In general, the solution to the problem of damping returns, or rather, its proper distribution, is simple, interesting, but useless, as it seems to me. 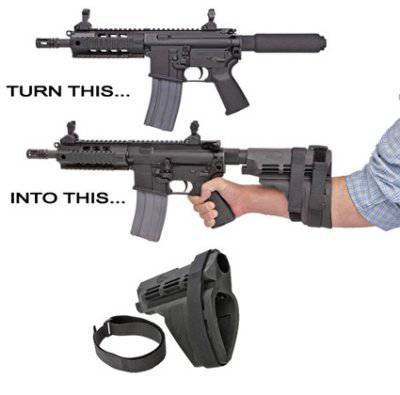