24 2013 June
7
Airplane DH.100 Vampire became the first single-engine jet fighter of Great Britain. The first prototype of the future aircraft flew in Hatfield 20 September 1943, just 16 months after the start of the detailed design of the machine. In 1946, the aircraft was adopted by the British Air Force and received the designation Vampire F.Mk 1. Later on, a version of the Vampire F.Mk 3 was created, which replaced the F.Mk 1 aircraft as part of the British Air Force.


Based on the Vampire F.Mk 3, an export version of the fighter was created - Canada and 85 Norway received the 4 aircraft. At the same time, the Australian company "de Havilland Aircraft Pty Ltd" licensed 80 fighters Vampire FB.Mk 30, equipped with a Rolls-Royce Nene engine of the Australian assembly. The aircraft in the version of the attack aircraft was equipped with a reinforced wing of a smaller span and went into a series under the designation Vampire FB.Mk 5. This version was well exported, the aircraft was delivered to Venezuela, Egypt, Iraq, Lebanon, New Zealand, Norway, Finland, France, Sweden. A number of fighter-bombers were also delivered to the South African and Indian air forces. Some countries, such as Italy, Switzerland and France, have acquired licenses for the production of these fighters.

The last single-seat fighter of this class, which was adopted by the British Air Force, was the Vampire FB.Mk 9 fighter, which was a variant of the FB.Mk 5 with pilot-cabin air conditioning for use in hot climates. This version of the fighter was delivered to Jordan, Ceylon (now Sri Lanka) and Rhodesia (Zimbabwe). By the time the machine was removed from production in December, more than 1953 single-seat Vampire fighter jets were launched in the UK in December. In total, the order of 1900 fighters was released (including 4400 in the UK). 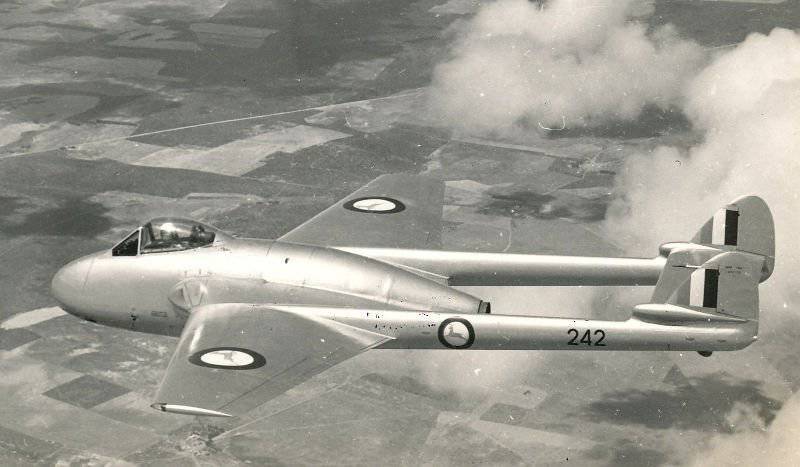 The design work on the new aircraft (conditional crab-spider cipher) and the development of jet engines for it took place simultaneously and were launched in the spring of 1942. His first flight fighter, designated DH.100 made 20 September 1943 of the year. After a series of tests, in the spring of the 1944 of the year at the English Electric factories (the native company was overloaded with other orders), preparations began for the serial production of the fighter. 13 on May 1944 of the year an order was issued for the construction of 120 fighters, but the first production car rose to the sky only 20 on April 1945 of the year. Few days remained before the victory in the Second World War, and “Vampire” was in combat operations - the aircraft received this name in the Royal Air Force — it did not take part.

Although after the end of World War II, military orders were canceled everywhere, the Vampire fighter did not affect it - on the contrary, in May 1945, the Ministry aviation increased the initial order to 300 cars. But the pace of aircraft production continued to remain low, so the first squadron (247th) was able to rearm in new fighters only by May 1946. These were “clean” cars in modification F.1. The first 40 fighters practically did not differ from the prototype - the same Dae Havilland Goblin jet engines (D.Gn.1) with a thrust of 1226 kgf, an unpressurized cockpit. Starting with the 41st engine, the engines — (D.GN.2, 1400 kgf) and the cockpit — changed, and the cockpit lantern changed from the 76th fighter — instead of the sliding part and headrest, a large sliding “drop” appeared on the plane.

Structurally, the DH.100 Vampire fighter is a midplane with a trapezoidal wing, two-beam tail and three-post landing gear with a nose wheel. The fuselage of the aircraft was formed from 2-x symmetrical halves, which docked with each other in the manufacturing process along the vertical plane. The nose of the aircraft had a wooden structure, and the center was all-metal. The cross set included a 3 power frame. The first frame possessed an armored partition, the front landing gear was attached to it on a special frame. The nose of the fighter was equipped with a quick-release panel, which facilitated access to the dashboard of the instrument panel and equipment. The second frame was also equipped with an armored partition wall and sidewalls of air intakes were attached to it. A firewall was mounted on the third frame. The power spars of the wing wings and the tubular frame of the engine were bolted to the 3 frame. 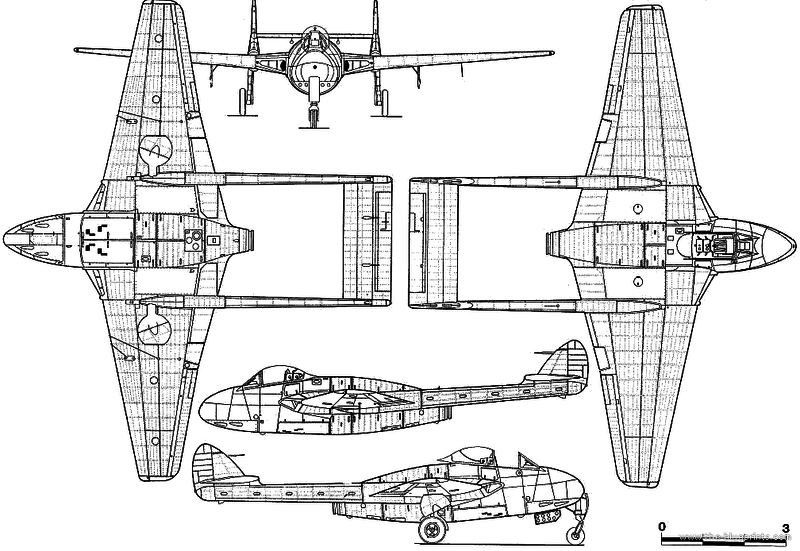 The cockpit is airtight, its charging was carried out from the engine compressor. The pilot is located in a metal chair with a cup under the parachute. The cockpit canopy consists of a sliding section and a visor. Cabin glazing - double-layer with an air cavity. Bulletproof glass was built into the canopy of the canopy. To combat the effects of windshield icing in the cockpit, there was a hand pump for feeding an alcohol mixture to the glass. Behind the pilot's cockpit, under the lantern, are the cartridge boxes and the radio station. Under the cockpit at the bottom of the fuselage were mounted 4-e 20-mm guns. In the area of ​​the engine were located 2 quick-release fairing and 4-e hinge flap, designed for its inspection.

The wing of the fighter has a pronounced contraction in terms of, as well as a decrease in the relative thickness from the root to the tips. The wing design is mainly used special aluminum alloy "Alcled". The longitudinal wing set includes the main and auxiliary spars, as well as stringers. The release of aerodynamic brakes can be made at flight speeds up to 800 km / h. In the root of the wing are the air intakes of the jet engine. Here are the air intakes for cooling the weapon compartment and the cockpit charging system.

The tail of the aircraft - two-keel, keels are interconnected stabilizer. On the left keel is a LDPE tube. The elevator has a servo equalizer. On the rudders are mounted compensators, which are pre-set on the ground and can not be adjusted during the flight. The chassis of the fighter is three-bearing, all of its racks are single-wheeled and are equipped with Lockeed air-oil shock absorbers. Front strut chassis self-orienting. The main wheels of the chassis are equipped with air-system brakes. In the air, the chassis is removed using a hydraulic drive. The main landing gear stacked in the wing on the scale, and the front desk - in the fuselage back. 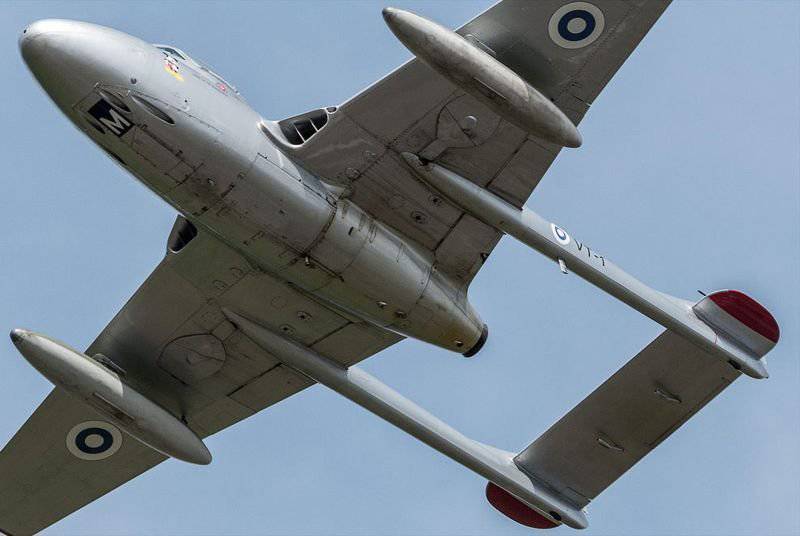 The fighter is equipped with TRG "Goblin", having a centrifugal compressor. In most of the fighters in the F.1 version, an engine with a 1400 kgf engine was installed. The design feature of the fighter was the absence of an extension pipe behind the nozzle. The fuel system of the DH.100 Vampire fighter consisted of 3-x fuel tanks: two wing on 241 l. and fuselage capacity 436 l. Fuel was supplied to the power plant by the main fuel pump, which operated with a drive from the engine. In addition, there was a booster pump equipped with an electric drive. The fuel in the fuel tanks was under air pressure, which was taken from the engine compressor.

The fighter’s radio equipment consisted of the R.3132 SRO transceiver and the TR.1934 radio station. Antenna - whip, mounted on the back of the fuselage. A G.45 movie camera was installed in the forward part of the aircraft behind a glass window. For the pilot, a set of oxygen equipment was provided: a cylinder Mk.5С, a device Mk.11 and a mask.

The DH.100 Vampire fighter is armed with an 4 20-mm Ispano MK.5 cannon. They are located in pairs along the sides in the lower part of the aircraft fuselage. Their compartment is heated by warm air, which is taken from the jet engine nozzle. The guns are powered by detachable metal bands of 2-x boxes. Each box, which is responsible for powering 2-x guns, holds 300 shells and is divided into 2 compartments of approximately equal size. Cartridges and links of belts are thrown out through special hatches from the bottom. Fire control - electric, reloading guns is carried out in manual mode and only at the airport with the help of a special device. 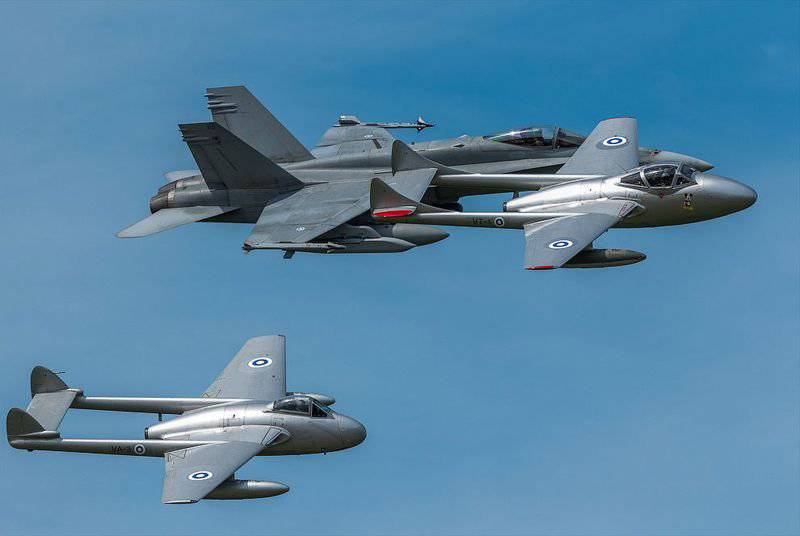 For shooting the pilot uses the gyroscopic sight of the Mk.5. Two trigger plates are located on the fighter's control stick and are covered with special caps, when reclining, the fuses are automatically turned off. In addition to gun armament, a fighter can carry up to 8 NAR with 25 or 60 head pounds (11 kg. Or 27 kg. Respectively). Uncontrolled rockets are suspended on special holders Mk.8 under the root of the wing in vertical pairs. Training aircraft and fighter-bombers were equipped with X. NUMX X-bomb bomb holders on the pylons, which were designed to hang bombs at 2 pounds (1 kg) or 500 pounds (227 kg). These holders are located under the wing consoles. Mechanical bomb wire release; he is responsible for dumping outboard fuel tanks.

The combat operation of single-handed vampire fighters in the Royal Air Force ended in 1955. However, by this time, the release of the double-seat version of the Vampire aircraft by T.11 (DH.115) was already arranged. This version was destined for many years of operation and widespread in the world. The glory of this model, perhaps, eclipsed all previous modifications of the fighter. The cabin of this training machine was designed for 2-x pilots, otherwise it was similar to the cabins of all previous versions of the fighter, but did not have a radar and had dual controls.

The role of the T.11 version can, perhaps, be compared only with the Soviet MiG-XNUMHUTI aircraft, thousands of 15-x and 50-fighter pilots received their training there. At the same time, the export list of supplies of training machines turned out to be wider than that of combat Vampires, in addition to the countries mentioned, they were used in Burma, Indonesia, Portugal, and Chile. The last English "Vampire" T.60 was retired only in 11 year. However, in other countries it continued to be used, often even as a combat aircraft. In addition to the British fighters, the only warred "Vampires" were the Egyptian aircraft, which in 1967 were not particularly successfully opposed by the Israeli Air Force. 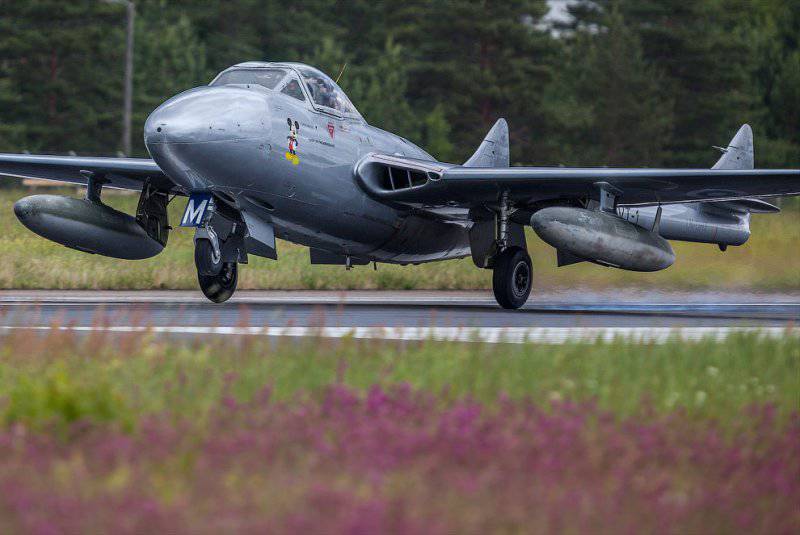 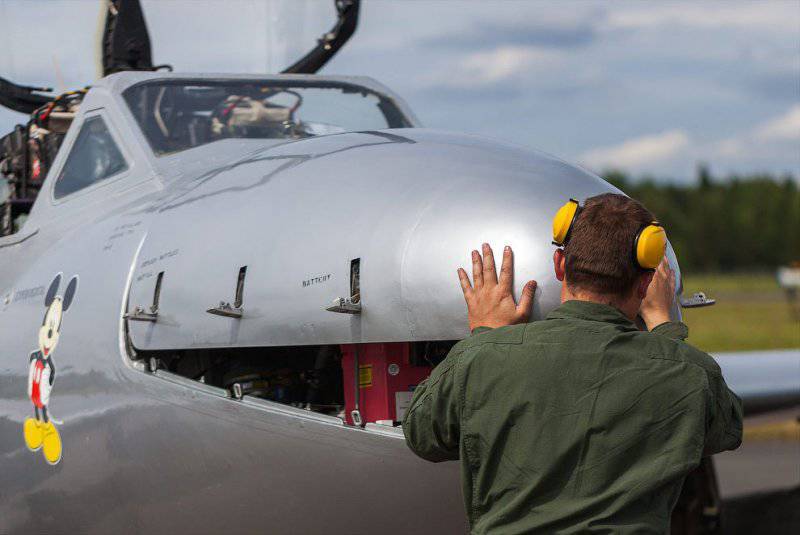 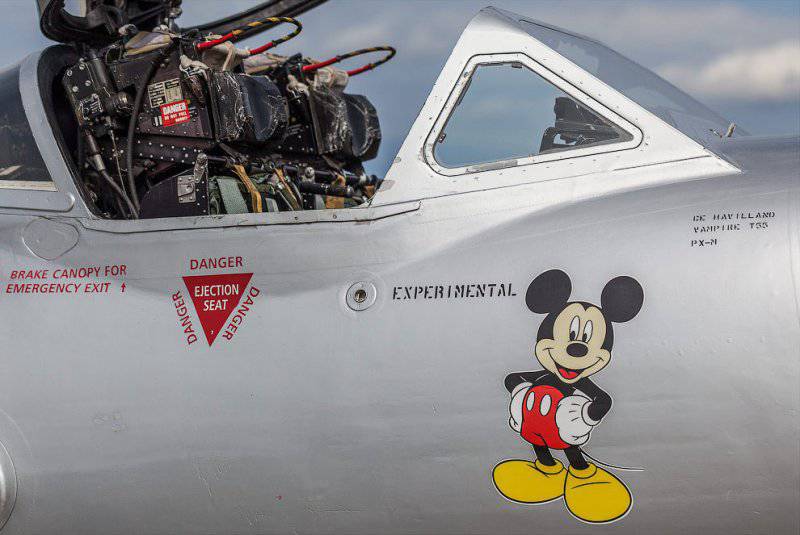 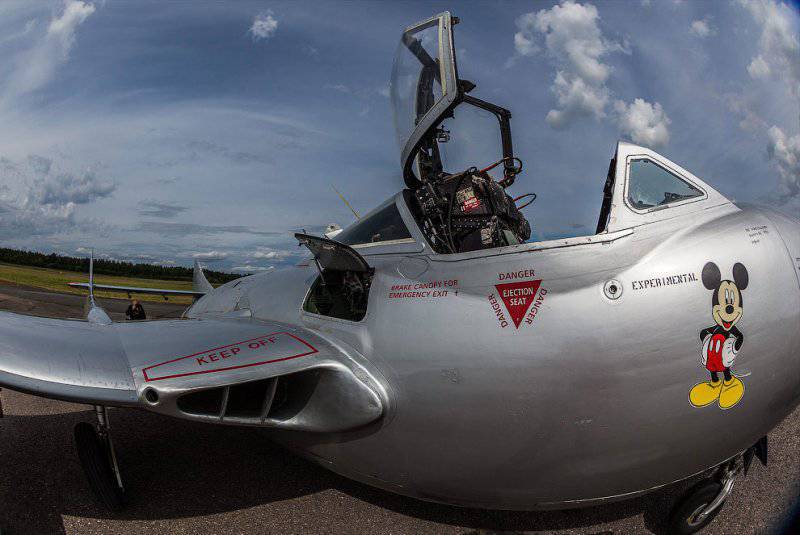 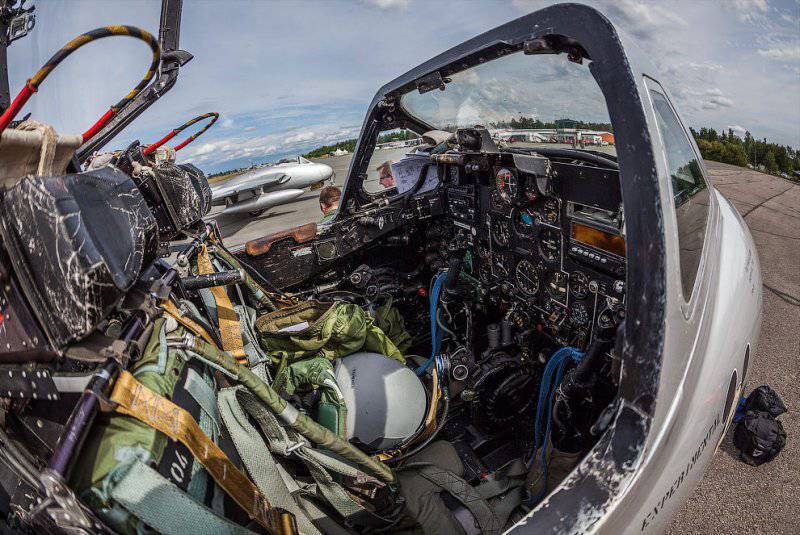 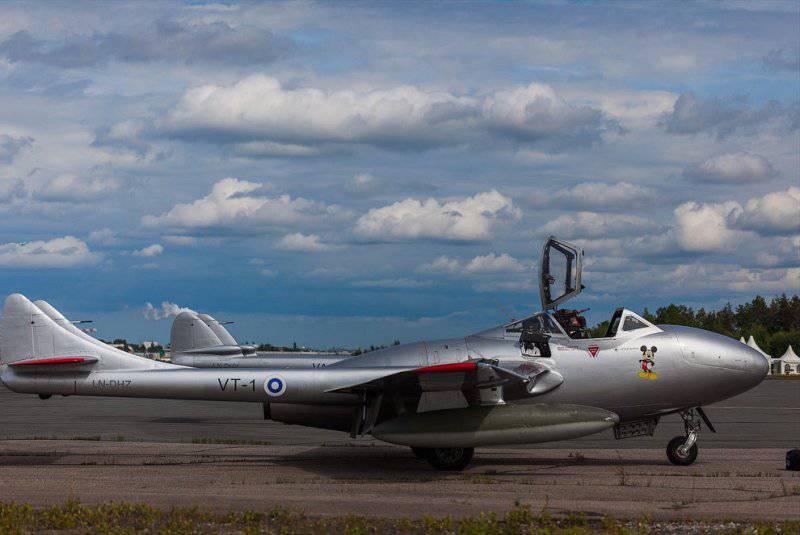 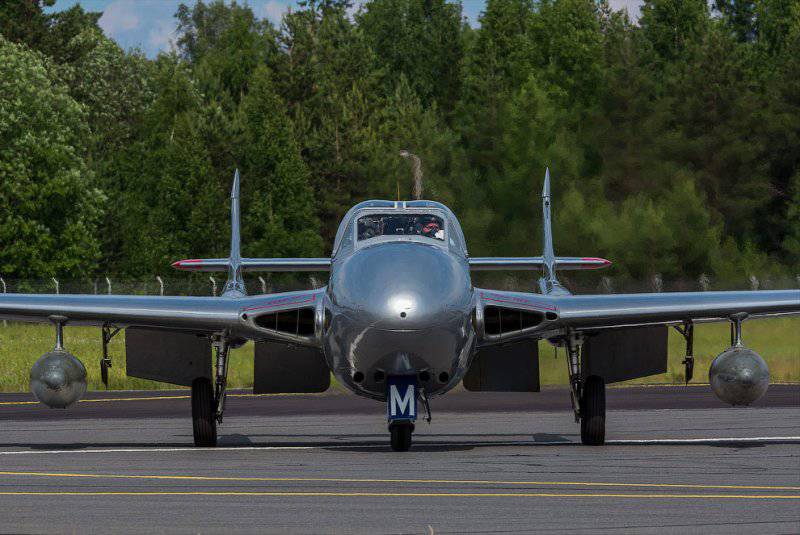 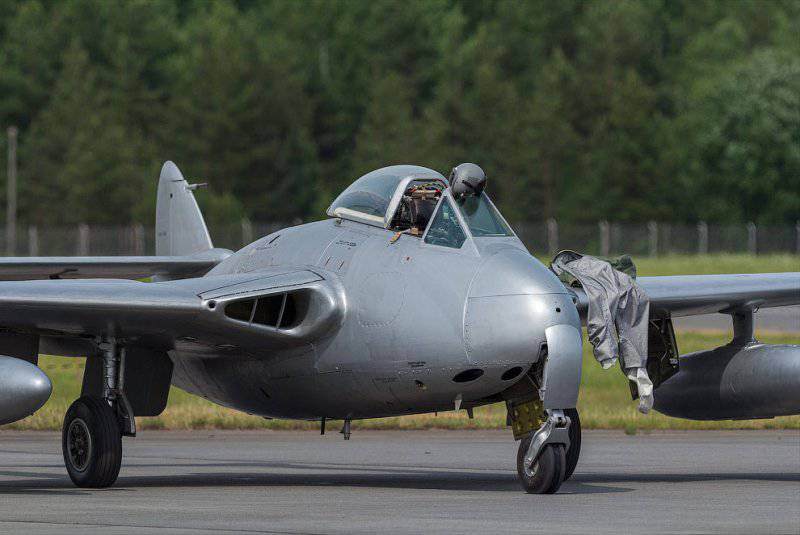 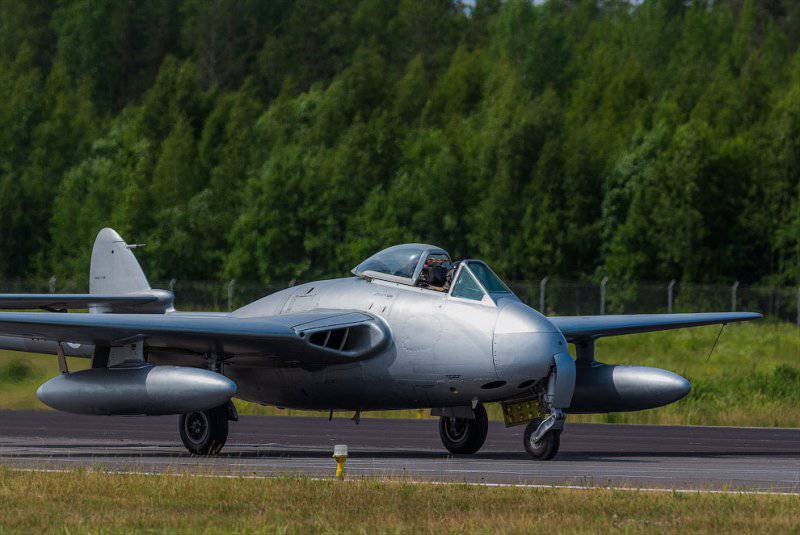 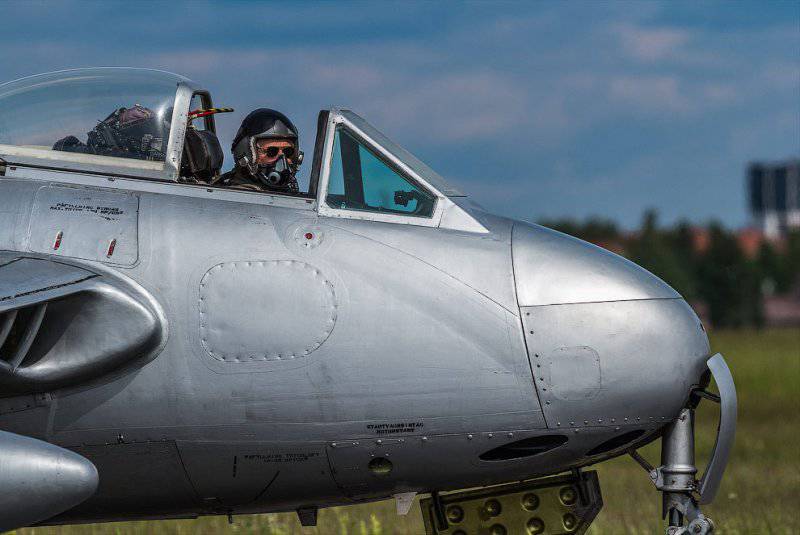 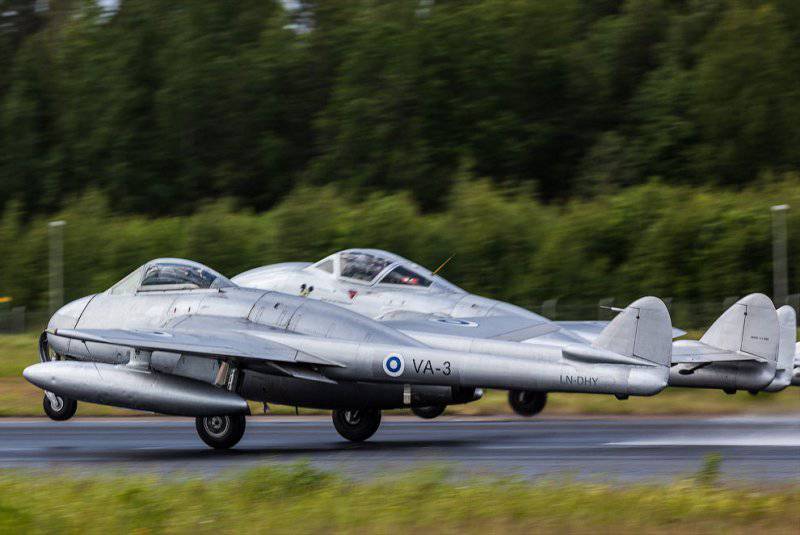 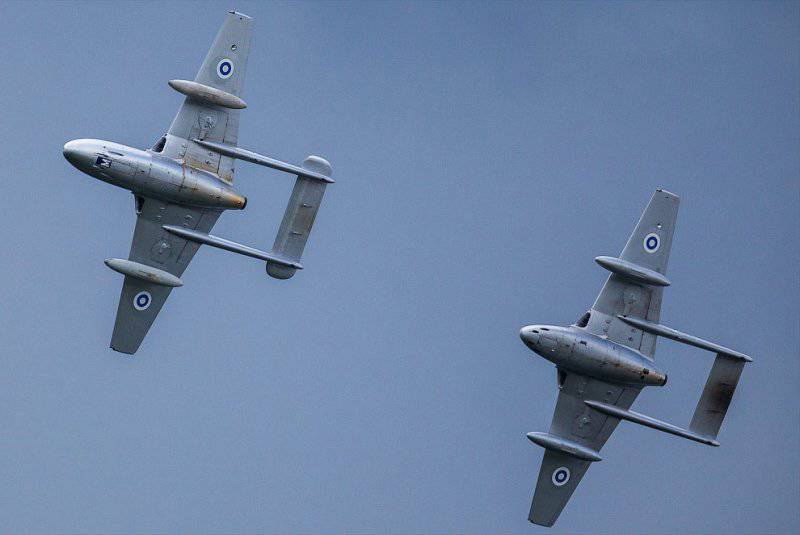