24 2013 June
7
By the fall of 1941, the German army was faced with problems regarding the use of armored vehicles. Available Tanks and assault guns worked well during constant offensives, but over time their characteristics became insufficient to carry out some tasks. Moving along foreign territory on the Eastern and North African fronts, the Germans more and more often came across a well-trained layered defense. The 75 mm guns of tanks and self-propelled guns ceased to cope with some fortifications, which is why the Wehrmacht needed new types of equipment with high firepower and sufficient mobility. 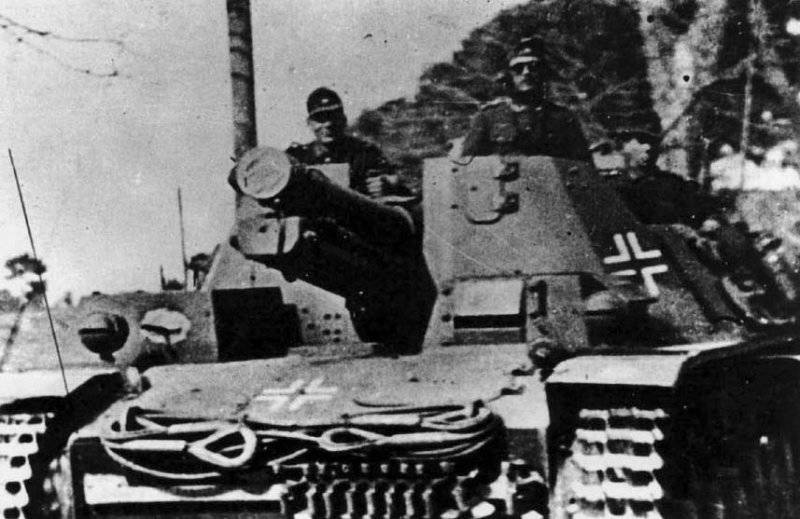 The troops had a small number of “assault tanks” 15 cm sIG 33 Sfl. auf Pz.KpfW.I Ausf B ohne Aufbau, also known as Sturmpanzer I Bison. However, these combat vehicles had not only high firepower, but also a lot of design flaws. For this reason, by the end of 41, the command of the German army was drawn up for the creation of a new self-propelled artillery unit, armed with an 150 caliber millimeter gun and without the disadvantages of the previous vehicle of similar purpose.

It is worth noting, the company Alkett still in 1940 year began research on this topic. The fact is that the PzKpfw I tank, which was already outdated by that time, was used as a base for self-propelled guns of the Sturmpanzer I. It was proposed to use the PzKpfw II tank chassis as a solution to the current problem. These tanks were a bit newer and more perfect than the previous ones, and besides, the troops had a sufficient number of them, which in the long term would have made it possible to quickly establish a massive retrofit in the ACS. In the summer of 40-th at the factory of the company "Alkett" collected the first copy of the promising self-propelled guns.

From the base tank removed the tower and part of the roof. In place of the cleaned units installed an open armored wheelhouse and devices for mounting the gun. As weapons for the new SAU, we chose the sIG 150 infantry howitzer tested on the previous "assault tank" 33-mm infantry howitzer. The power plant has not undergone any changes - its foundation was still the six-cylinder Maybach HL62TRM engine with 140 horsepower. By the autumn of 1940, the main work on fine-tuning this version of the ACS was completed and in October it was tested at the test site. As the firing showed, the PzKpfw II tank chassis was too weak for a powerful 150-mm gun. In addition, the cutting house self-propelled turned out not enough volume - the crew was difficult to work in it.

It took several months to correct the identified deficiencies. A new prototype came out of the workshop only in February 1941 of the year. After the upgrade, the design became much more complicated. Initially, Alkett engineers wanted to ensure the possibility of converting tanks into self-propelled guns in the conditions of combat workshops. But the improvement of the project noticeably complicated this process. First of all, the reason for this was the updated design of the armored hull. To enhance the chassis, we had to introduce an additional pair of road wheels into it, which led to an extension of the casing by approximately 700 mm (according to other data, at 600-650). In addition, remembering the awkward fighting compartment of the first prototype, the body was expanded to 320 mm. The design of the armored shell and some other small details were also changed. 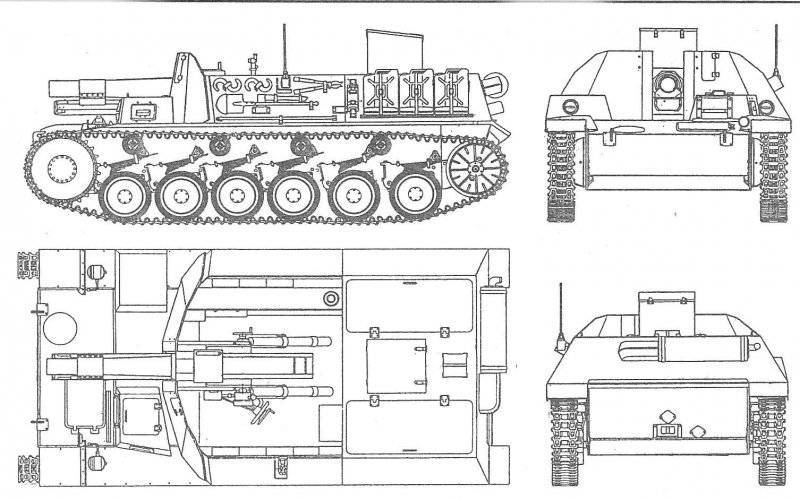 In February, 41 began construction of the first prototype of the updated self-propelled gun, but the work was completed only at the beginning of summer. SAU Sturmpanzer II had a combat mass of about 12 tons, but it was equipped with the old 140-strong engine. A relatively low armored cabin was mounted on the roof of the hull, in the front sheet of which there was a window for the sIG 33 gun. The thickness of the cutting armor varied from 30 mm in the frontal part to 5 mm on the sides and stern. For self-defense, ACS was equipped with one MG34 machine gun. The installation system of the gun made it possible to direct it horizontally within a sector of width 10 ° and, according to different sources, to 60-70 ° in a vertical plane. In the fighting compartment were jobs of three crew members. In the styling fit only 10 shells. Such a small ammunition was planned to compensate for the appropriate tactics of use.

Until the end of 1941, the German industry could not even produce a pre-production batch of 12 machines. By this time, only seven Sturmpanzer II self-propelled guns were ready, the other five were assembled in the next 42 year. The machine does not fully satisfy the customer. Large firepower allowed to effectively attack the technique and strengthen the enemy, but a weak booking accordingly affected the real capabilities of the machine. However, the pre-production lot was sent to the troops under the official designation 15cm sIG 33 auf Fahrgestell PzKpfw II. As a “testing ground” for military tests, North Africa was chosen, where self-propelled guns went in the early spring of 1942 as part of the 707 and 708 mouth of the heavy infantry artillery.

During operation in the African Corps, all claims to the new "assault tank" were confirmed. Weak booking did not allow to use it in some combat formations with tanks. In addition, in African conditions, the engine was extremely poor. All these disadvantages outweighed the advantages of a large-caliber gun. As a result, the inherent flaws of self-propelled guns in combination with the climate of North Africa led to the fact that by the end of 1942, only a few combat vehicles remained in the ranks. The rest of the Sturmpanzer II was idle due to the lack of spare parts or because it was impossible to recover. In this case, the entire ACS was used as a source of spare parts for equipment still suitable for operation. 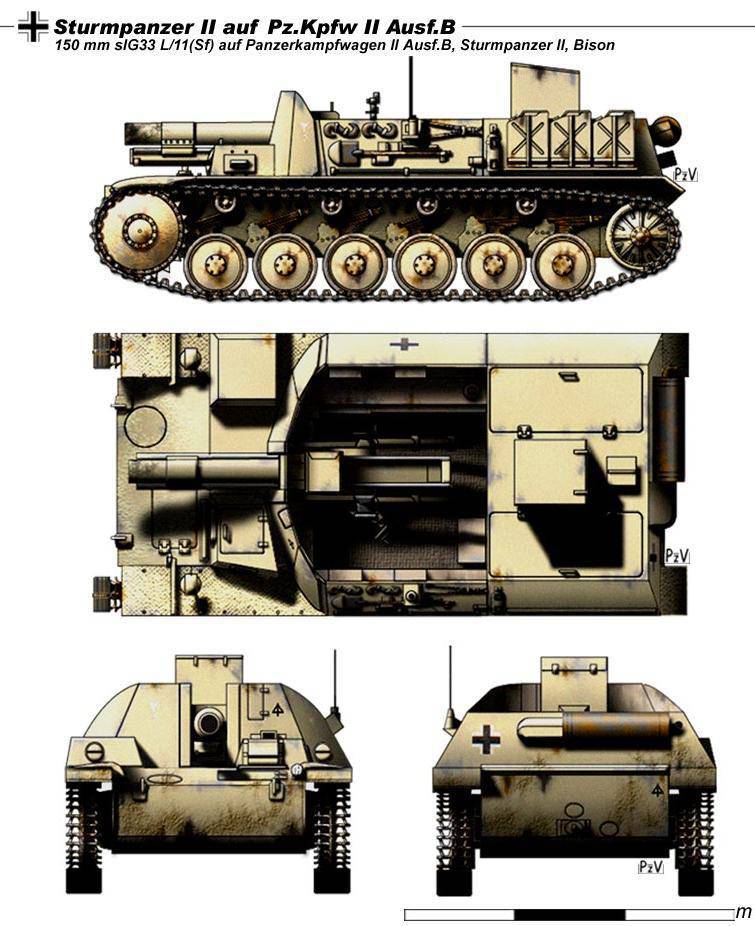 In May, the 1943 of the year, when the African corps capitulated, there was only one self-propelled gun on the move, which was taken by the British as a trophy. During the offensive, the British army managed to capture six more “assault tanks”, dismantled for parts. After making a pre-production batch of 12 SAU machines, the 15cm sIG 33 auf Fahrgestell PzKpfw II was not built or used. The results of its operation were taken into account in the following projects of similar equipment.

The further fate of one of the self-propelled guns captured by the British is interesting. After the end of the Second World War, one copy was transferred to Egypt. Most likely, it was the only self-propelled self-propelled gun left for the Germans, but there is a version about restoring several semi-disassembled cars. Regardless of the exact number, the fate of the captured Sturmpanzer II, replenished the fleet of vehicles of the Egyptian army, was unenviable. The last car was destroyed in 1948 year, during the Arab-Israeli war. 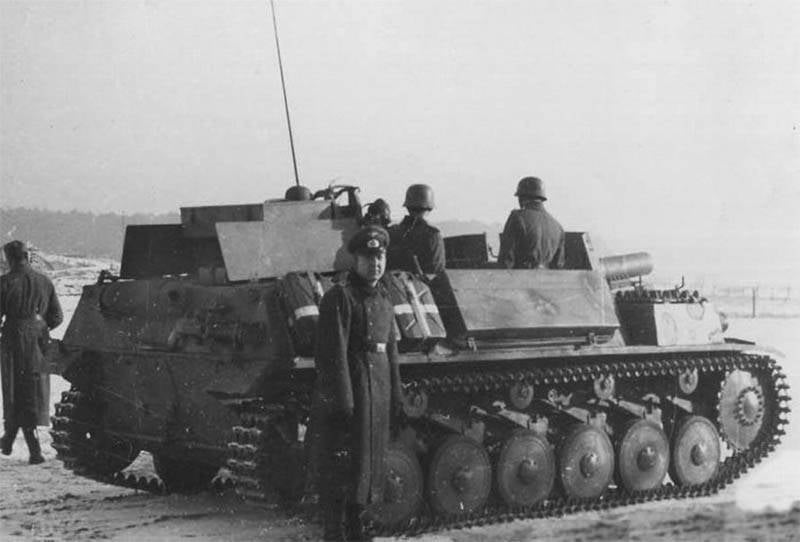 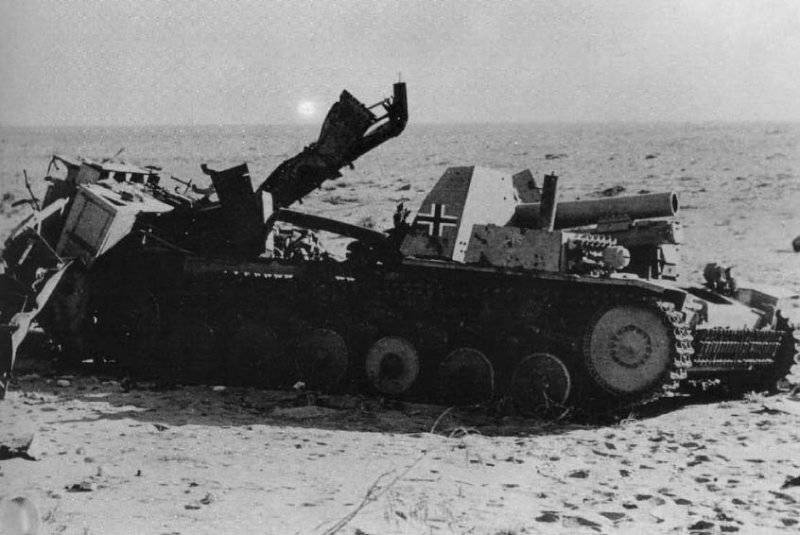 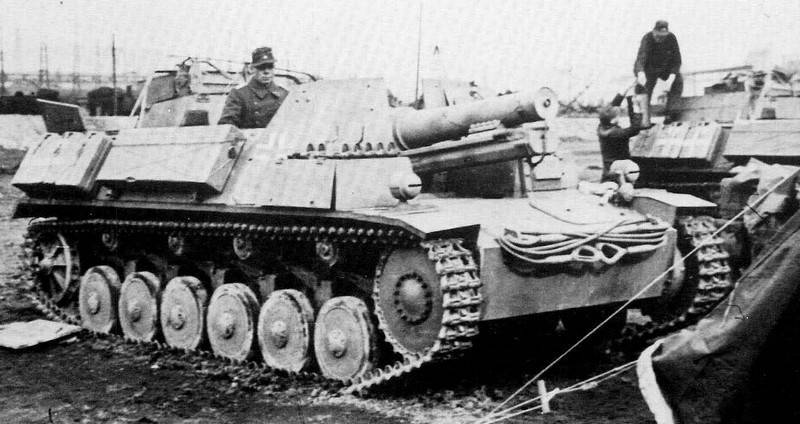 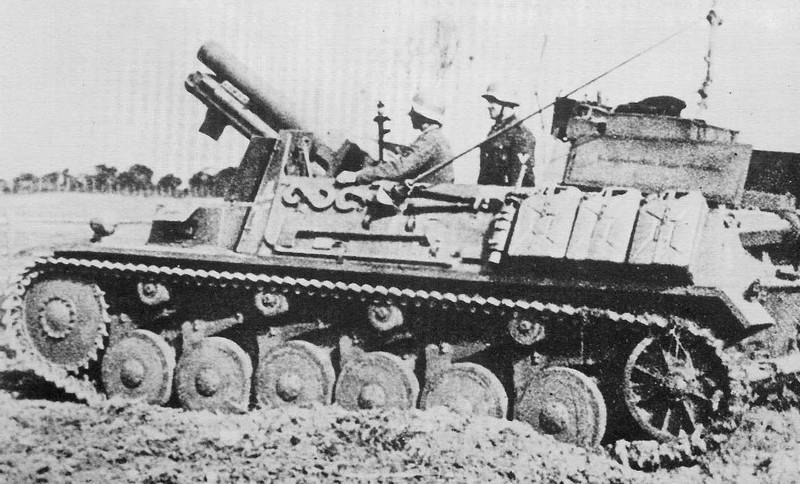 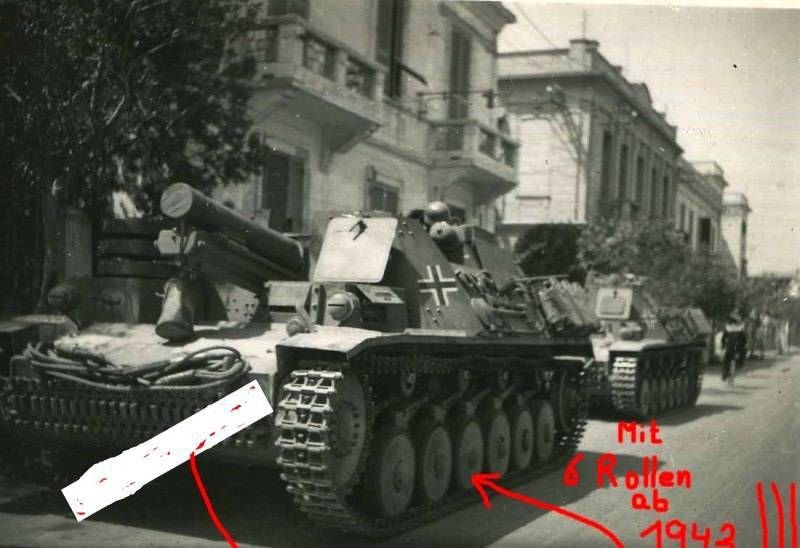 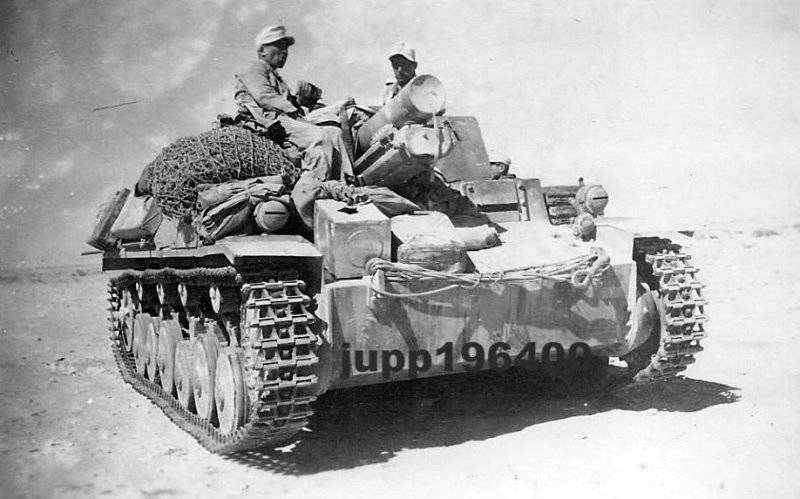