Trojan horse for the military industrial complex of Russia?

January 12 2011
5
What they talked about over the past years, it happened. Russia still acquires Mistral helicopter carriers from France, the amount of the transaction is estimated at 1,37 billion euros. This is not the first deal of Russia in the area of ​​military-technical cooperation with France, Russia has previously acquired from this country tank sights and various avionics, now discussing the purchase of a separate batch of sets of equipment for FELIN soldiers for GRU special forces. But it was the deal to acquire two Mistral helicopter carriers that became the largest in the whole stories modern Russia.

"Mistral" - a large warship with a displacement of 21 thousand tons and a length of 210 meters. The vessel is able to reach speeds of more than 18 knots (about 35 km / h), the cruising range is 37 thousand km. The helicopter carrier is capable of carrying heavy helicopters on board the 16. The total crew number of the vessel, including the crew serving the helicopters, is 390 people. In addition, the helicopter carrier is able to take on board up to 900 soldiers, 40 units of armored vehicles or 70 vehicles.

At present, disputes over the purchase of these ships from France are gaining momentum, the opinions of military experts are divided, and the voices of skeptics are heard more and more. Thus, the captain of the 1 rank, the first vice-president of the Academy of Geopolitical Problems Konstantin Sivkov made a sharp criticism of such a purchase. So that our readers would not be completely bored, we will not only provide expert comments, but also supplement them with our own data, which is at variance with its data and is widely available (hereafter, italicized in the text).

What goals can the Mistral fulfill in Russia?

The structure of the Russian Navy simply has no tasks that this ship could solve. Each vessel must be integrated into the armed forces system, in particular fleet, and perform well-defined tasks, which is why there is no need for Mistral. 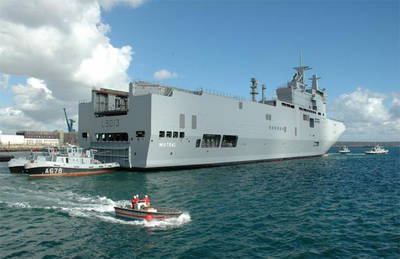 This ship is designed primarily for expeditionary operations with the transfer of troops on long distances. The French need this ship, they have their own interests in the same tropical Africa. These ships were built with an eye to supporting the country's ongoing colonial policies in third world countries.

And then the question arises, what colonies is Russia going to seize? Maybe landings in Latin America? The only direction in Russia where this ship could have been used is Georgian. But such a small Georgia’s attention is clearly redundant. In the event of a possible conflict with this small Caucasian country, this large and weakly-armed ship, intended for the transfer of assault forces to 1000 km. fits not the best way.

In this way, the expert easily walked around one more direction of using such vessels - the Kuril Islands and Sakhalin. It is there that the first ship of the Mistral class will have to go to the Pacific Fleet.

The Black Sea Fleet today already has 6 amphibious assault ships of the 775 and 1171 projects, which would have done their job perfectly well. Someone believes that the dignity of the Mistral is that it can carry helicopters on board the 16, but anti-submarine ships of the Moscow and Leningrad projects could carry 25 helicopters.

Here, the distinguished captain of the first rank suffered particularly strongly. Firstly, the landing craft of the 775 and 1171 projects belong to the generation of combat ships created as early as 1960-70-s. Secondly, their amphibious capabilities are very limited, for example, the first is able to take on board a reinforced company of marines or 225 paratroopers, all the armament of the ship are two twin 57 guns and systems of the Gradz MLRS to support the landing, remember about artillery armament, in the future it will be useful to you. The second BDK, larger and better armed, is able to take on board the 440 paratroopers and 20 tanks on board, again losing to the Mistral, despite the fact that the first ships of this series were built back in the 1966 year!

Next, the captain of the 1 rank compares the incomparable — an anti-submarine helicopter carrier with a universal landing ship dock that can perform 4 of different functions — a landing ship, a helicopter carrier, a floating command center, a floating hospital. I do not know where Konstantin Sivkov found the data on 25 helicopters on the ships of the Leningrad and Moscow projects, perhaps this information is still “classified” therefore all free sources indicate that such ships carried the X-YUMX Ka-14 helicopters mass of which are 25 tons! Mistral takes on the 7 heavy (16-ton) helicopters, in our case, these are Ka-12 and Ka-27 machines. In addition, he is able to take on light 52 light helicopters, which the captain for some reason is silent. But the most important thing is that the "Leningrad" and "Moscow" were withdrawn from the fleet in the middle of the 32's. 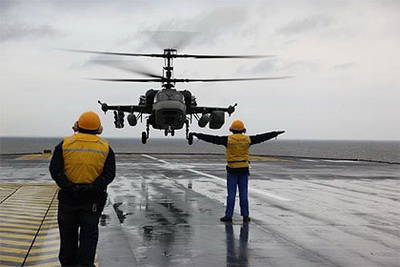 Landing Ka-52 helicopter on the deck of the "Mistral"

At the moment, the fleet does not have the necessary infrastructure to service such ships, therefore it will have to be built from scratch, which will require huge new costs of money.

When buying French ships, we are sending the appropriate signal to our former partners in military-technical cooperation that Russia has recognized the superiority of its rival in the arms market - France. Therefore, they can begin to stretch not to ours, but to the French arms, and this ship to perform for the military industrial complex of the country the function of the "Trojan Horse".

What innovations does the Mistral carry?

In the opinion of Konstantin Sivkov, the ship has one innovation - the aviation fuel supply pipeline passes in the area of ​​the galley! This thing is innovative, but not the fact that it is useful. In fact, the designers of the ship initially “programmed” it to the occurrence of fires.

By the way, Russia is acquiring Mistral helicopter carriers with all navigation and technological equipment, including combat navigation.

Buying ships of the Mistral class we find ourselves technologically tied to Western countries. A recent example of such an anchor is Venezuela. Until recently, this country bought American F-16 fighters. After relations between the countries deteriorated, Washington simply stopped supplies to the country. aviation components, and fighters quickly fell into disrepair.

An even more illustrative example of the operation was “Storm in the Desert” 1991 of the year, when one of the main reasons for losing Saddam was that Iraq had a large number of French and American air defense systems “Crotal”, “Hawk”, “Roland”, which before the start of the operation were eaten out of order by a team of satellites. Modern military equipment is created taking into account the installation of special programs into it, thanks to which the country of the manufacturer, if necessary, is able to disable it.

However, here is what you can read about the Iraqi air defenses during Operation Desert Storm. Iraq’s air defense was a rather formidable force, and for the most part consisted of Soviet-made weapons. On arms there 38 of S-75, 50 of S-125, 36 SAM "Cube" 23 SAM "Osa-M", about 1235 MPADS "Arrow-1-2M" and SAM "Arrow-10 CB" 302 MPADS Needle-1 and more 1000 of various artillery guns, as well as 18 of the Krotal air defense missile system and 40 of the Roland-2 air defense missile system. Probably their loss was significant, but it is clearly not catastrophic for the defense of the country. By the way, the losses of allied aviation during Operation Desert Storm amounted to 52 aircraft and 23 helicopters, and this is according to official data, which is probably why in the future the losses of aircraft in NATO began to keep quiet, so when the Yugoslav bombardment took place, only 2 officially recognized the losses machines.

How to evaluate the "Mistral" in the world

This ship is rated mostly negative. So it is estimated and American experts. Until now, no one country in the world except Russia bought such “troughs”, the question was considered by Australia, but in the end they refused to buy. Not least, they refused to buy this ship because of its low combat capabilities.

Argued that Australia refused to buy ships in France, as the country's leadership had a strong desire to produce them in their shipyards, this is why both countries could not agree.

Or take the ship's air defense system - it is very weak. In essence, it consists of only two anti-aircraft guns that are not capable of hitting even a single aerial target.

At a time to remember the ship project 775 armed already with two twin 57-mm guns, to the word "Mistral" has in addition to artillery 2 artillery anti-aircraft missiles with two guides, and what weapons to receive our ships can only guess. 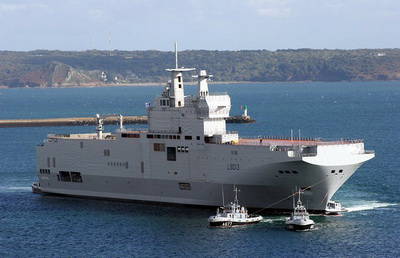 Mistral class ships are very bulky and easily hit, not only by aviation, but also by coastal forces and other enemy ships. Given the increased fire hazard, getting into the 1-2 ship bombs or projectiles can be fatal for a significant part of its landing force.

The installation of our sea air defense systems is problematic due to the layout of the ship, and the installation of more advanced systems will reduce the payload of the ship. There is another significant point, the ship was originally designed for operation in warm tropical waters, we have completely different climatic conditions, which will cause increased difficulties in operation and increase wear.

Does Russia know how to build "modern" ships?

Recently, all of us are trying to convince us that Russia is unable to produce modern ships - this is a lie. Russia is able to build first class ships and even heavy aircraft carrying cruisers. For some reason, such products are manufactured for India and China, the same aircraft carrier “Admiral Gorshkov” for Delhi.

The same aircraft carrying cruiser Admiral Gorshkov was laid in 1978 year! In the year 1987 was included in the fleet (built almost 10 years) transferred to the Indian Navy after a complete overhaul.

However, our military "reformer" believe that Russia is not able to produce a simpler ship class "Mistral". According to the calculations of our shipbuilders, the construction of such a ship in Russia would cost 150 million euros, rather than 1,37 billion for two ships. Thus, we are investing huge amounts of money in support of not our own, but the alien ship industry, as a result, not ours, but the French workers will be provided with work. All this suggests that with such a purchase of weapons, corruption schemes play an important role.