Military test drive: what are the decommissioned Urals and KAMAZ trucks capable of?

Auctions that sell military equipment are always of interest. But many people have a question: what are ZILs, “Urals” and KAMAZ trucks capable of doing? Now the military showed these cars in action. Well, the test drive was impressive! The correspondent of Onliner.by visited the Old Roads where this event was held and looked at the possibilities of the written-off military equipment.


The range of cars sold is large: ZIL, Ural, KAMAZ trucks, unpretentious KrAZ trucks and even tracked multi-purpose light armored MT-LB and MT-LBu tractors. Last, as it may seem at first glance, the place is only at the Minsk Vtorchermet plant in Gatovo - they look so scary. 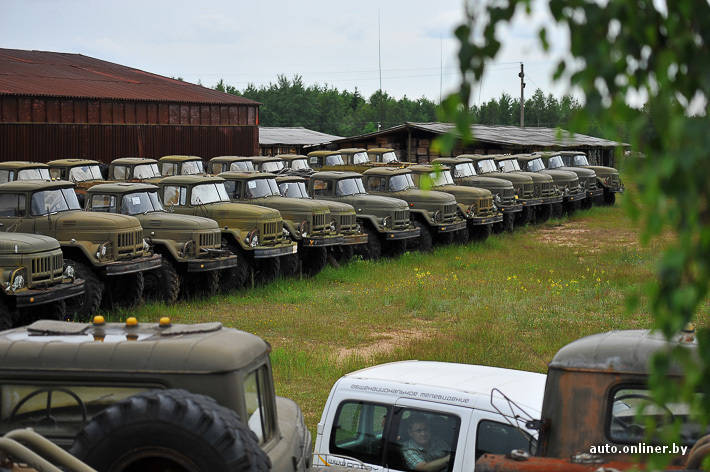 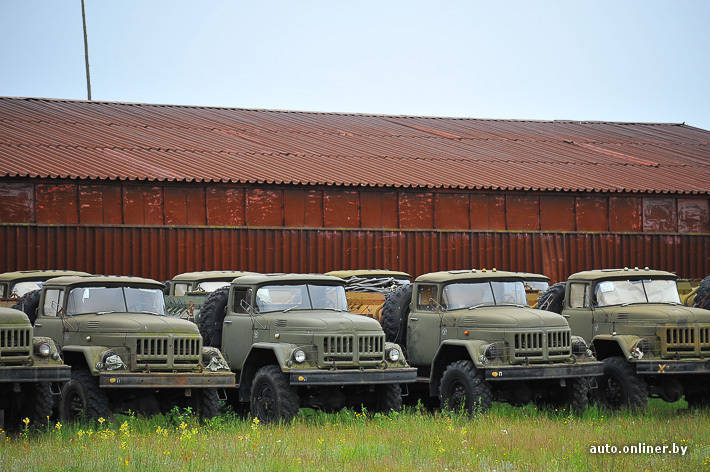 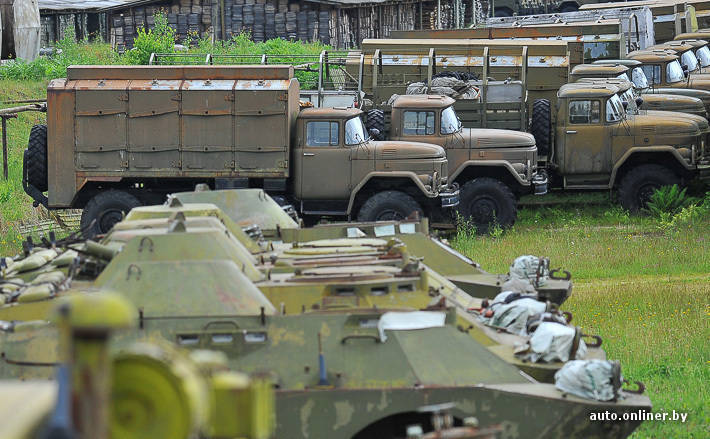 Peeling paint, rust stains on the body, and all militarized parts (hatches, towers, loopholes for rifle weapons) welded seams. But despite this, the tractor is in demand in Russia. Only during the last auction, about which we wrote earlier, nine such tracked vehicles were sold. They are bought mainly by hunters, fishermen and outdoor enthusiasts. True, for movement on public roads requires a special permit traffic police. 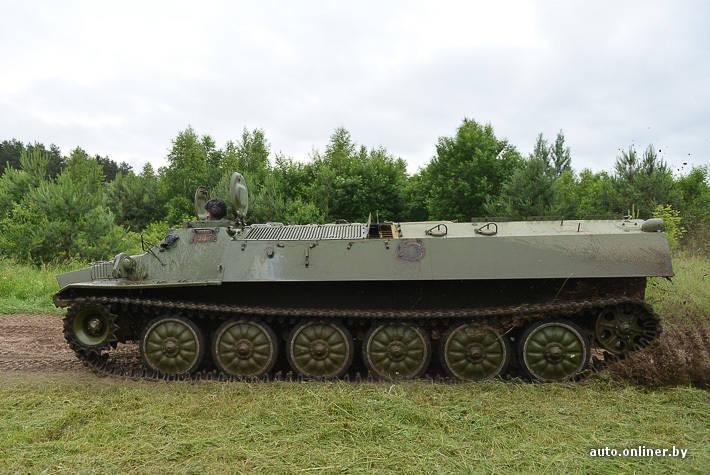 Possessing high maneuverability, even in remote taiga, a fairly economical tractor can reach speeds of up to 60 km / h. Agree, for an armored tracked vehicle, released in the second half of the last century, this is a pretty good indicator. 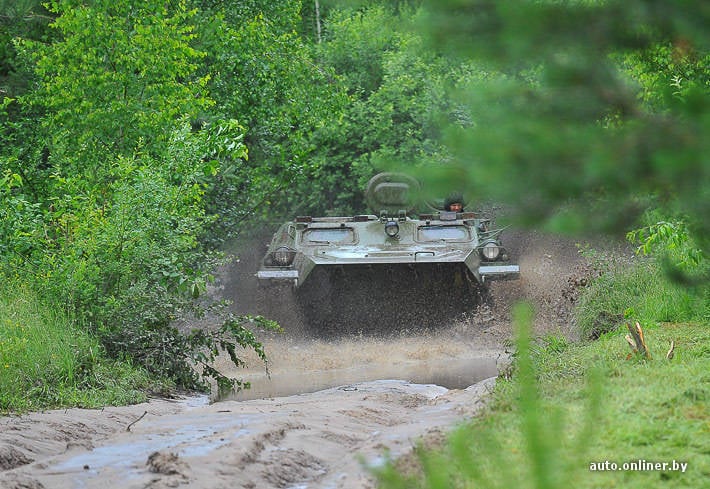 Of course, immediately after purchasing the MT-LB tractor, it is not necessary to drive into the dirt. Military vehicles have been standing in the open for several years and require the performance of a certain kind of work. As officers of the base in Old Roads told us, it is necessary to begin with the replacement of all rubber products, which due to age have lost their properties. Otherwise, there are no problems with these machines, they are quite reliable and relatively inexpensive to operate. 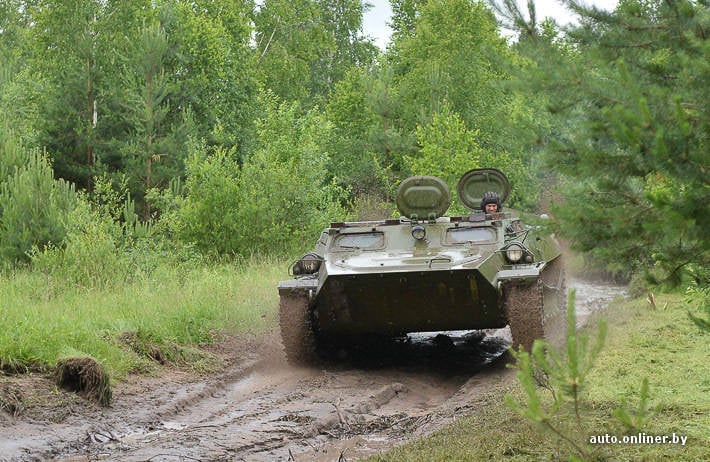 Especially for our readers, the military demonstrated the power of MT-LB, “mixing” the dirt in the nearby forest near them. Tractor easily coped with overcoming a small ford. 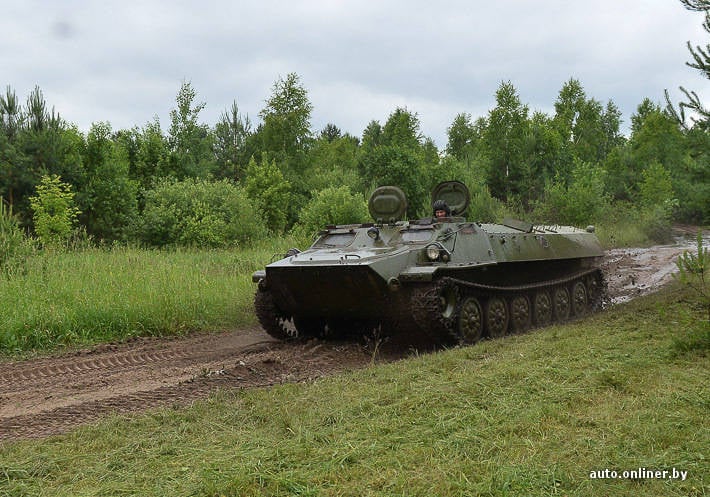 Then, the car overcame a section of the forest road at maximum speed. It seemed that the wet and dirty tractor was blown dry in an instant, and the branches of bushes and trees swept away all the dirt from its hull. 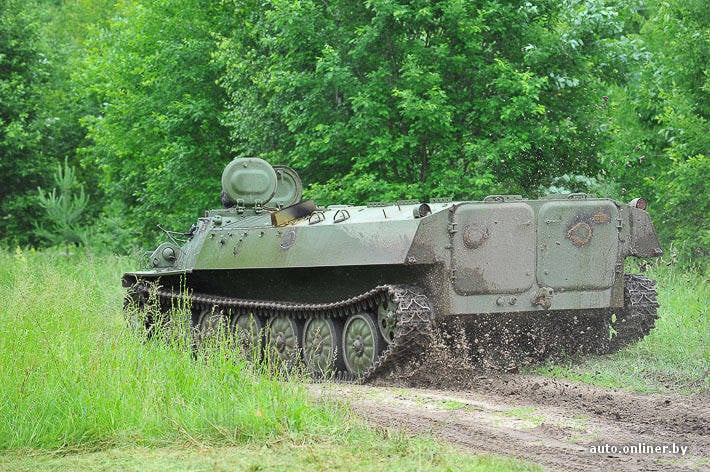 Following the MT-LB, wheeled vehicles drove along the same ditch. The KAMAZ car, which was allocated part of for testing, actually sold and will be put up at the next auction. The appearance of the equipment corresponds to the age and cost - a matt cabin, once brilliant, has rusty “bugs” on the body. However, if you do not pay attention to this moment (for the owner with hands it is not a problem to paint), then the car is in good condition. Rubber on the iron disks will serve more than one year, and all the other nuances are quite removable. 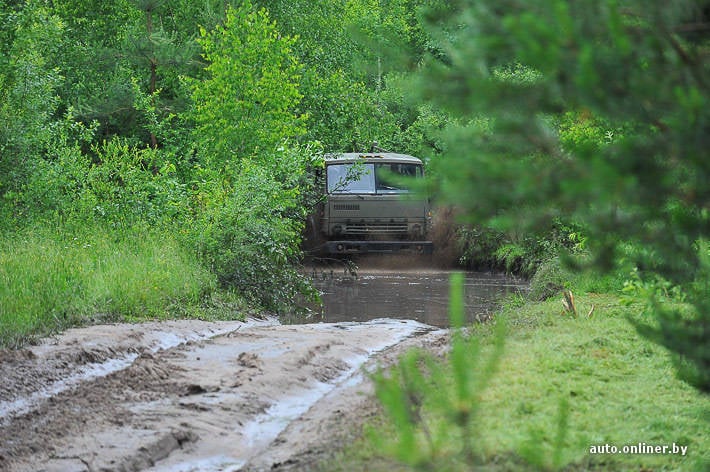 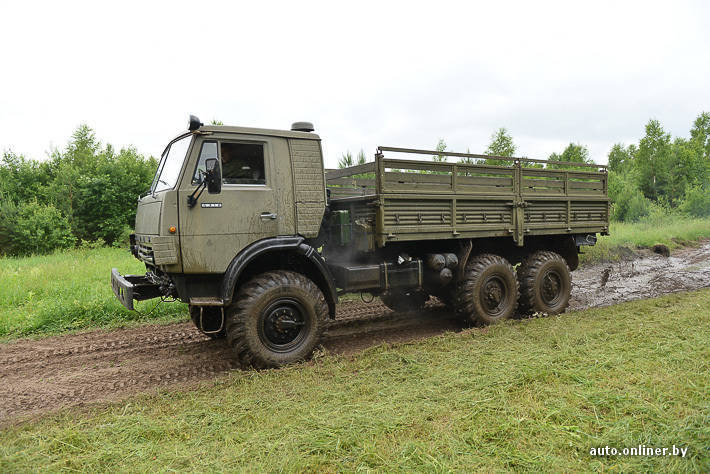 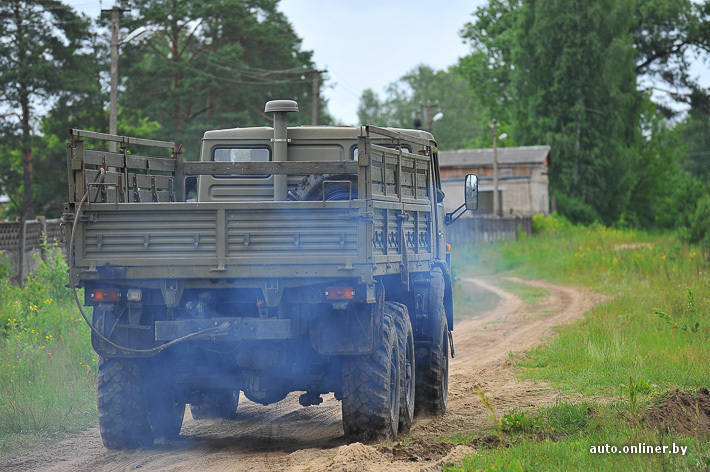 The officers of the unit are confident that this KAMAZ will definitely be bought at auction. For information, similar cars at recent auctions were sold at an initial price of 55 million Belarusian rubles. The final cost, as a rule, is higher than the initial value on 20 — 25%. 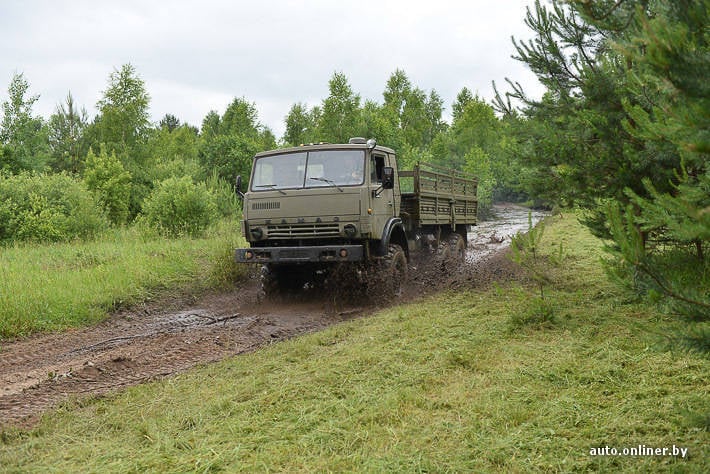 After KAMAZ disappeared into the thick of the forest, the military "Ural" left for the edge. The side truck towed three more (!) GAZ-66. From the side it seemed as if the boy was pulling toy cars on a string. 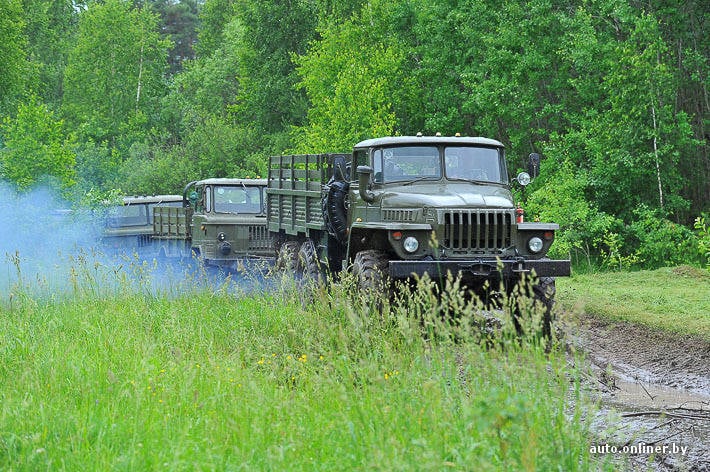 At some point, the metal cable is taut. It seemed that someone from the drivers of slave cars hit the brakes. Indeed, the military modeled the situation as if on one of the trucks after the brake pedal was pressed, the brake pads jammed. 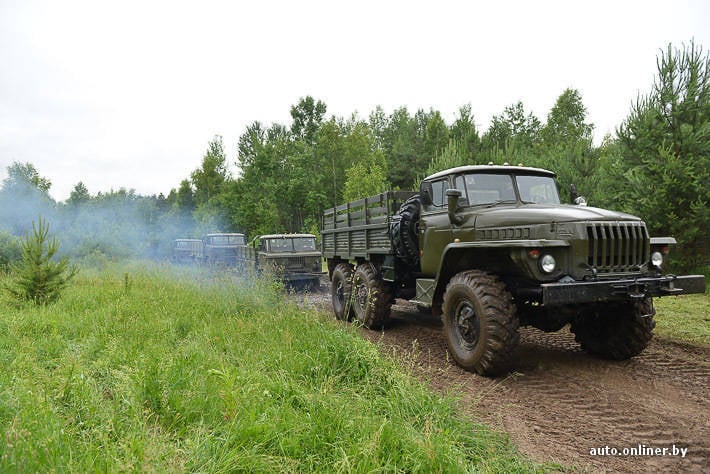 Throwing dirt out from under the massive wheels, the Ural began to “burrow” confidently with a roar. Another couple of minutes, and it is unlikely that the car itself could go to the "land". Now, when the wheels are up to the rims in the dirt, the only way to get out of it and pull the column out is to use a winch.
Stretching it to a distance of about ten meters, the driver hooked the first car. Turning on the working brakes, the “Ural” began to pull the winch cable with a uniform roar. Like cars of a train, cars started moving. A few minutes later, military trucks were released from the captivity of mud ... 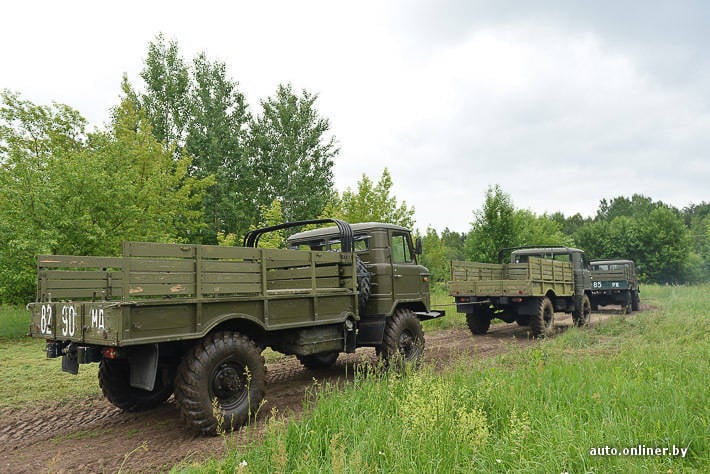 A little aside, on the outskirts of the forest, a mechanical vehicle repair shop was deployed. Next to it, in the field, the engine was repaired and welding was performed. The workshop does not even require electricity - it is completely autonomous. Similar workshops are currently being sold through the authorized organization of the RUE “Belspetskontrakt” and cost from 50 million Belarusian rubles. 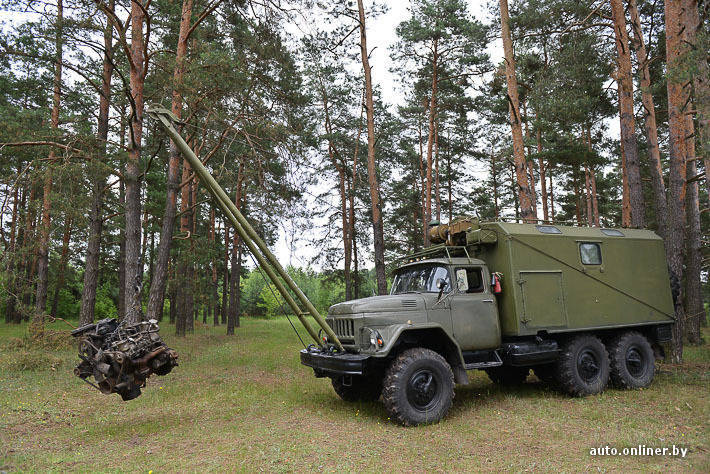 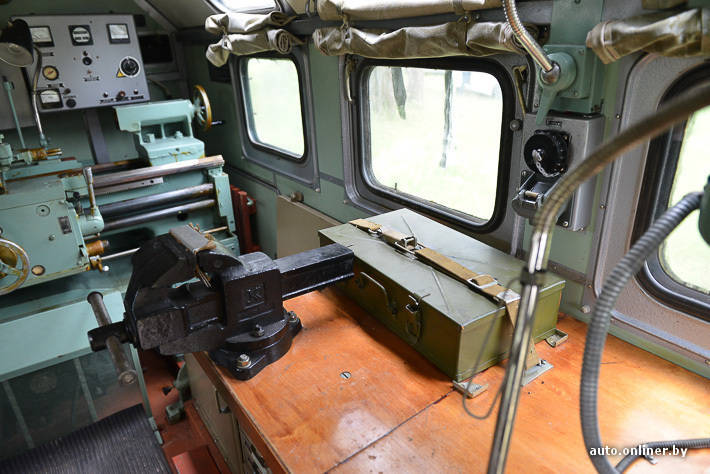 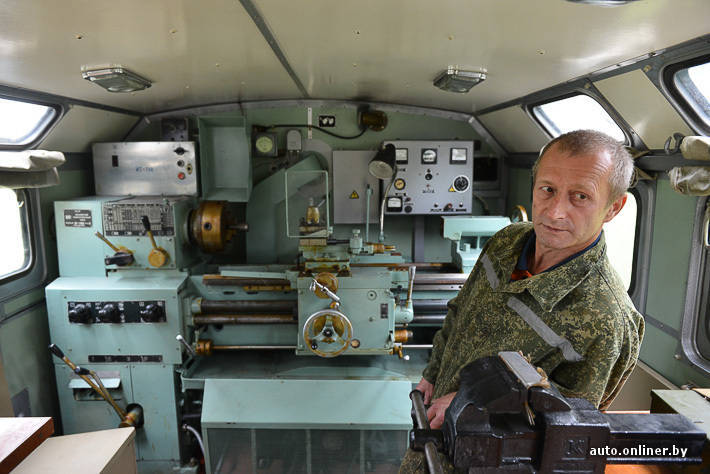 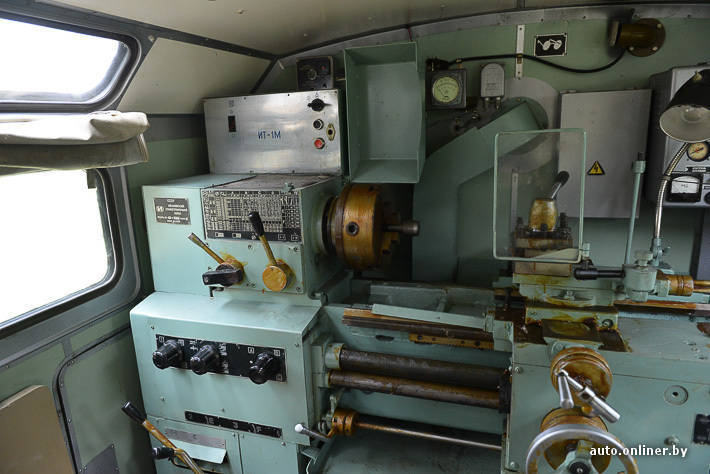 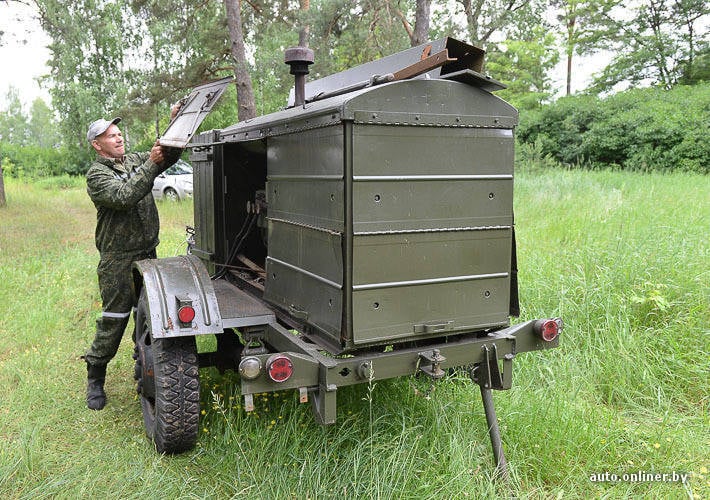 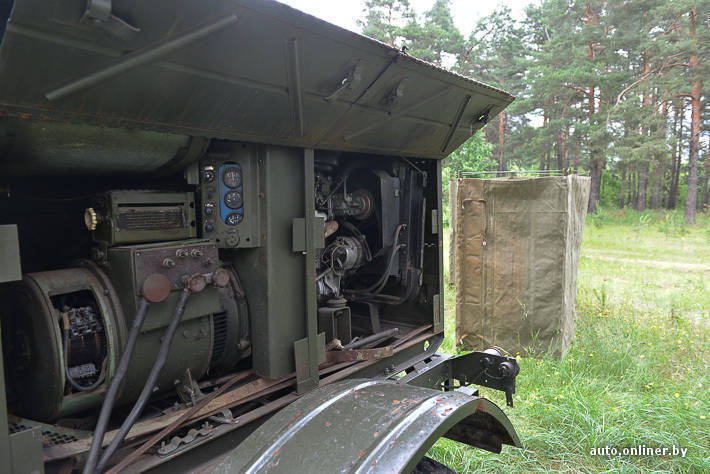 Then, the journalists were shown the work of the ARS-14 auto-pouring station. The petrol ZIL-131 with a barrel (2,7 tons) and a pump can now be reclassified as a fire engine. The use of APCs as a “fire” is not uncommon, as evidenced by the coloring of some cars in the territory: the percentages of 10 parked cars are painted red. 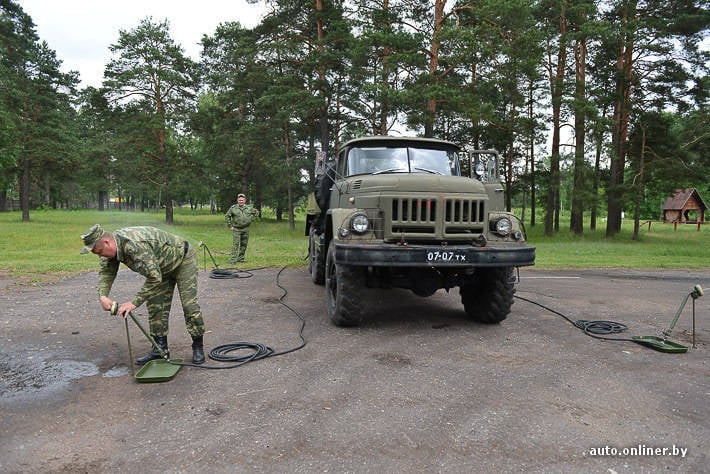 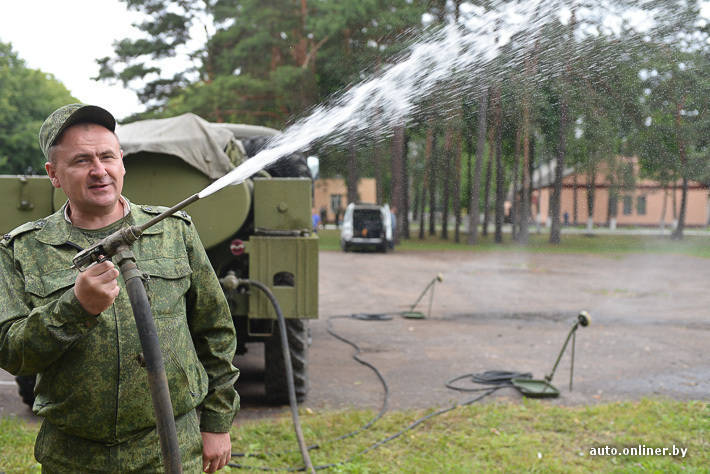 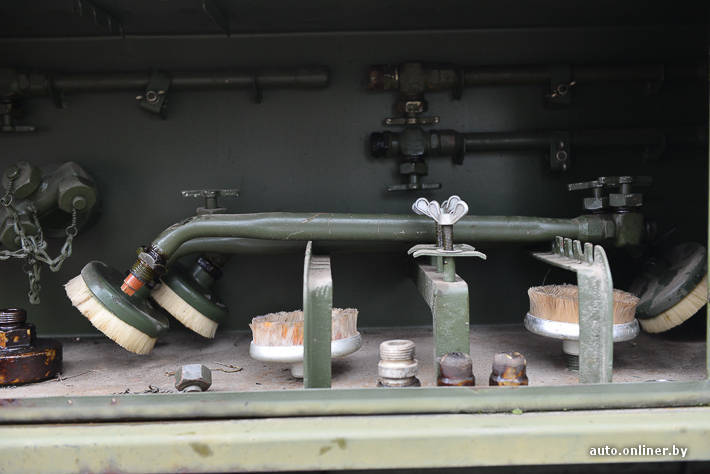 In addition, APC-14 is used to deliver water and other liquid substances. Oilmen acquire stations for the transport of liquid fuel, road builders - for washing roads. Our correspondent has found another use for this model of military equipment. By connecting a special gun to the filling hoses, which looks similar to the filling, you can perfectly wash the car. The pressure of the water allowed even mosquitoes and flies from the hood and license plate of the car! Domestic answer Karcher! 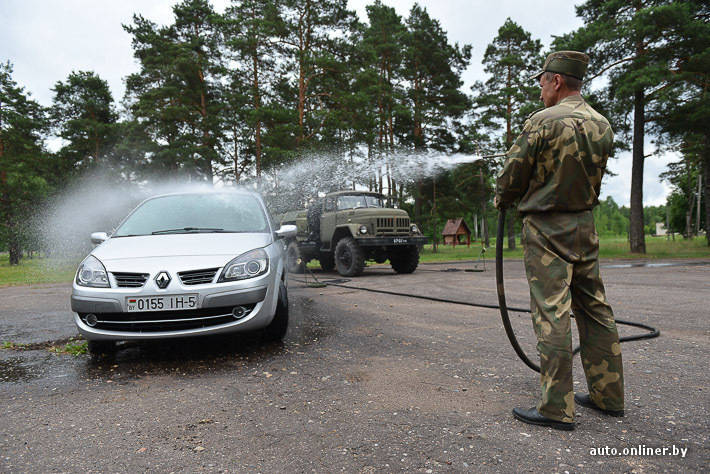 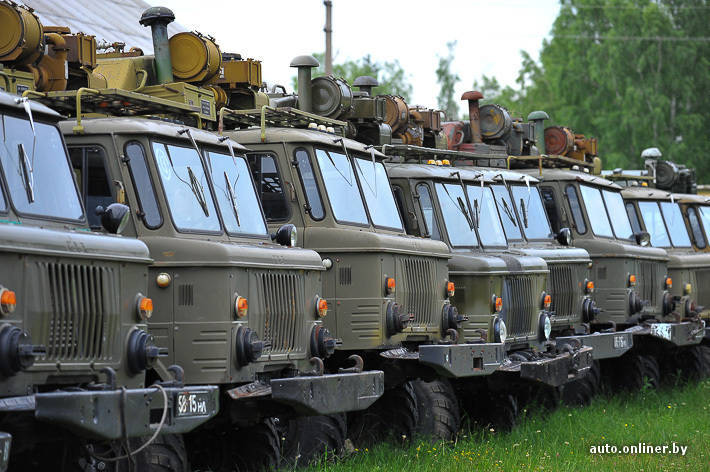 We thank for the help in the preparation of the report the military information agency "Vayar".

Ctrl Enter
Noticed oshЫbku Highlight text and press. Ctrl + Enter
We are
Test drive ASN-233-115 "Tiger": the car "polite people"Plantations "Carnations" and "Cornflowers". We found in the city a huge arsenal of artillery and small arms, including trophy
Military Reviewin Yandex News
Military Reviewin Google News
46 comments
Information
Dear reader, to leave comments on the publication, you must to register.