20 2013 June
24
The Russian Navy plans to include the unique rescue ship Igor Belousov. The ship will be handed over the fleet in 2014, the Interfax news agency reported, citing a representative of the Russian Ministry of Defense. In total, the search and rescue support of the Russian fleet in the period from 2013 to 2016 will be replenished immediately with 20 new special purpose ships. As the Ministry of Defense told reporters, by the end of this year 4 boats of integrated emergency and rescue support will be built under the project 23040 for the Russian Black Sea Fleet.


"Another 12 boats built on this project will be laid at the shipyards and accepted into the fleets in the 2014 and 2015 years," said a representative of the Russian Navy. In addition, the search and rescue forces of the Caspian Flotilla will receive a new rescue tugboat SB-45 built according to the 22870 project, and the Leningrad naval base will be replenished with the rescue tugboat Victor Konetsky built according to the 745mbbs project. In 2014, the Navy of the country will receive 2 tugboats of the 02980 project, which are able to perform various rescue operations: assist ships in distress, search, evacuate and rescue affected people, place them on board, extinguish fires on coastal and floating objects, carry out underwater engineering works.

The largest and most anticipated rescue vessel in the fleet is the ship “Igor Belousov”, which is being built according to the 21300 “Dolphin” project. The basis for the creation of a modern rescue ship, equipped with the necessary deep-water equipment, was the death of the Russian nuclear submarine Kursk in August 2000, which clearly demonstrated the critical situation of the existing rescue service of the Russian Navy. 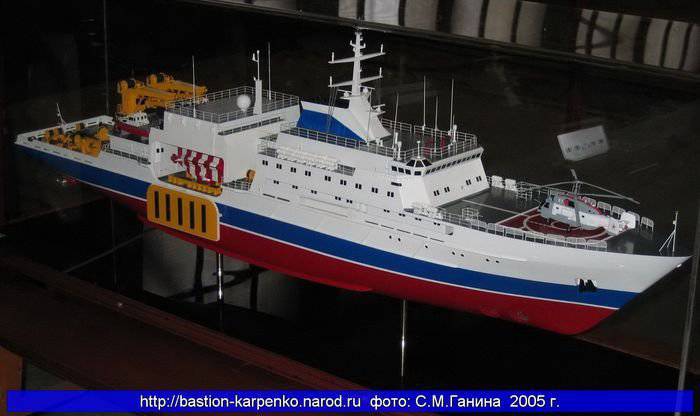 In the tender announced by the Ministry of Defense of the Russian Federation for the creation of a ship of the 21300 pr., Preference was given to the Admiralty Shipyards enterprise, in the slip which 24 of December 2005 of the year was laid a unique rescue ship Igor Belousov. The project itself was developed in JSC CMB "Almaz". The construction of such vessels in the USSR and Russia was not carried out for nearly 30 years. According to the plans of naval sailors, each fleet should be equipped with one similar ship. Presumably the first ship of the series will conduct service in the Northern Fleet, and the next ship will be transferred to the Pacific Fleet of Russia. It was originally planned that the ship would be ready in 4 of the year, but these plans did not come true because of the complexity of the project and the significant interruptions that were associated with non-rhythmic funding. A new contract for the completion of the rescue ship Pr. Dolphin was signed in November 2011 of the year, it provides for the transfer of the finished ship to the customer in 2014 year.

The complexity of this project lies in the fact that at the same time with the ship in the shipyards there is a construction of a deep-sea rescue device of the 18271 pr. Bester-1, which will have a working depth of more than 700 meters. The carrier of this deep-sea device should be "Igor Belousov." The case of the device is made of high-strength alloy, specially created in the Central Research Institute of Structural Materials "Prometheus". At present, the titanium rescue deepwater apparatus (MUH) of the 18271 project has been sent from the Admiralty Shipyards to Nizhny Novgorod for testing.

The SGA of the 18271 Ave. was originally designed as a further modernization of the SGA of the 18270 Ave. "Bester", which was made in the 1994 year and became the first mobile rescue device in Russia. For the first time, practical exercises on air and road transport of this unit (with the involvement of the An-124 aircraft) were successfully held back in the 1996 year. The development of this project, as well as 18270, 1855 and 18551 projects, was carried out by Lazurit Central Design Bureau, which has been developing special rescue equipment for submariners for half a century, working in close cooperation with leading institutes of the country's Navy. 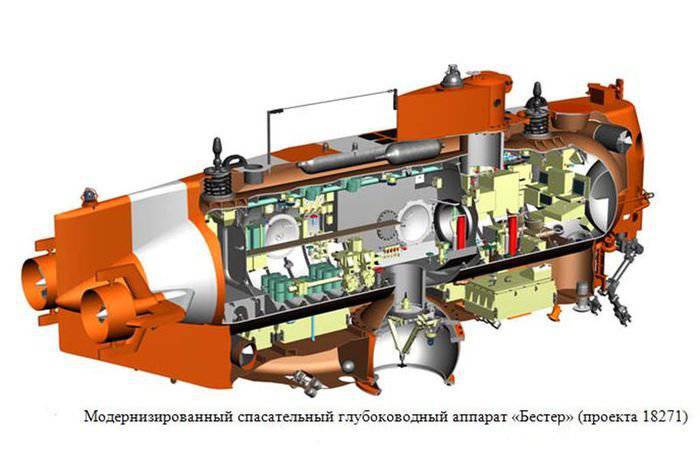 At present, Admiralty Shipyards, OJSC is building a new Bester-1 MCC, on which:

- mounted new electronic weapons, which are integrated into a single system;
- a life support system is used, which works reliably even with increased pressure in the rescue compartment; decompression of rescued submariners in the rescue compartment will be provided at the MUH (using the flow ventilation method);
- used high-performance "smart" working manipulators;
- reception of rescued submariners is guaranteed not only by the “dry”, but also by the “wet” method (at a depth of immersion to 60 meters).

In its specific characteristics (the number of tons of displacement on the 1 rescued), the modern Russian MUH is close to the new MUH Nemo, part of the NSRS rescue system used by the countries of the NATO bloc, but by the number of people rescued, the ability to stay on the current and depth of immersion is superior to the foreign equivalent.

The rescue vessel “Igor Belousov” is intended for rescue crews of emergency submarines in surface situations or lying on the ground, as well as supplying electricity, air, and rescue equipment to submarines and surface vessels. In addition, the ship can search and survey emergency facilities in a given area of ​​the world's oceans, including as part of international maritime rescue units. 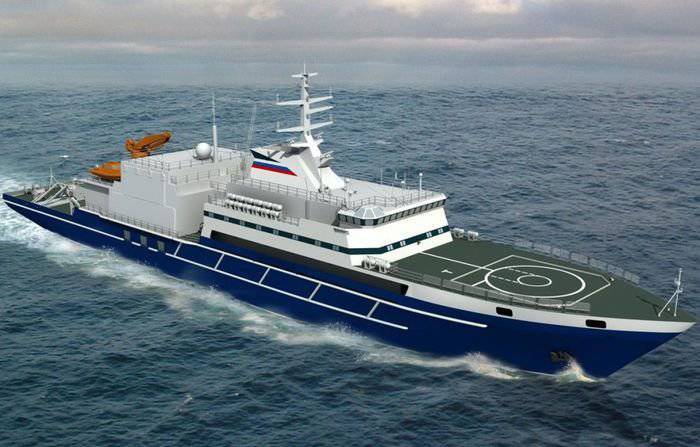 On the rescue ship "Igor Belousov" will be located a whole range of various rescue equipment:

- habitable and uninhabited deep-water remote-controlled underwater vehicles with working depths up to 700 meters;
- it is foreseen to equip the ship with remote-controlled underwater vehicles of the “Venom”, “Sea Tiger” or “Scorpio” types;
-Equipment of modern serial deep-sea diving complex of the Scottish company DIVEX, designed for work at depths up to 450 meters. For more than 30-year-old history DIVEX built and commissioned more than 100 various deep-sea diving systems;
- diving post for work at depths up to 60 meters;
- decompression complex for 60 rescued people;

The deep-sea apparatuses with which the rescue complex is equipped are able to dock with any type of submarine. Additionally, sea rescue vessels built on the 21300 Dolphin project will be able to solve tasks not directly related to rescue and search, for example, to take part in the development of the shelf, as well as to carry out other underwater technical works at a considerable depth. 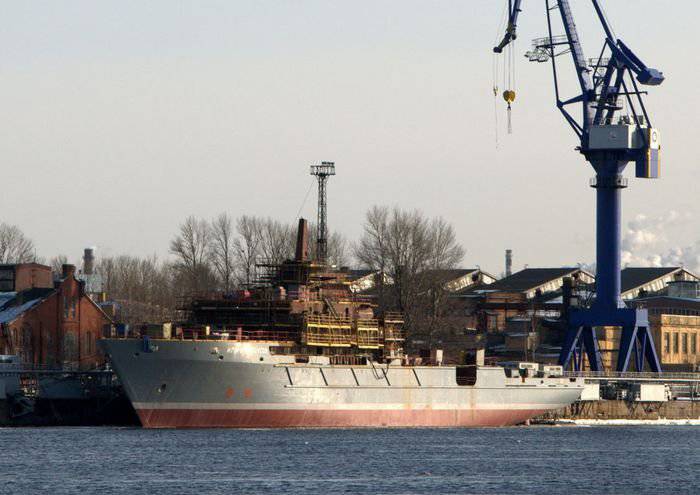 "Igor Belousov", April 2013 of the year
The commander-in-chief of the Russian Navy, Admiral Viktor Chirkov, called the launching of the vessel a significant event for the entire Navy. “Today we are completing work on creating the concept of a search and rescue system. We plan that a rescue ship that will be able to solve a fairly wide range of search and rescue tasks, including rescue crews of emergency submarines, will be included in each of the Russian fleets, ”Chirkov said. During the design work on the rescue vessel of the 21300 ave. By the designers of the Almaz Central Magnetic Design Bureau, the entire current world experience in creating rescue equipment was analyzed and processed.

Alexander Shlyahtenko, general director of JSC CMDB Almaz, called launching Igor Belousov a double holiday for shipbuilders. According to him, this rescue ship is twice the first - the first large joint project of the Admiralty Shipyards and Almaz and the first ship of this class being built for the Russian fleet. Shlyakhtenko hopes that this project will become basic, and on the basis of the lead ship will be created and built new vessels for the development of the depths of the sea.

The main characteristics of the rescue vessel are: the length of the waterline is 97,8 m., The width of the ship is 17,2 m., The depth of the vessel on the mid-section is 10,6 m; displacement - 5037 tons. Seaworthiness: to safely stay in the open sea - unlimited; by descent-recovery rescue deepwater apparatus - the excitement of the sea in 3-4 points; on the descent-ascent of the diving bell - the excitement of the sea 5 points. Full travel speed - 15 nodes; The cruising distance of the ship at an economic speed with a full supply of fuel is 3500 nautical miles. The crew of the ship - 96 people; spare seats on board for rescued people are 120 (of which 60 is in pressure chambers).