The present and future of the Bundeswehr 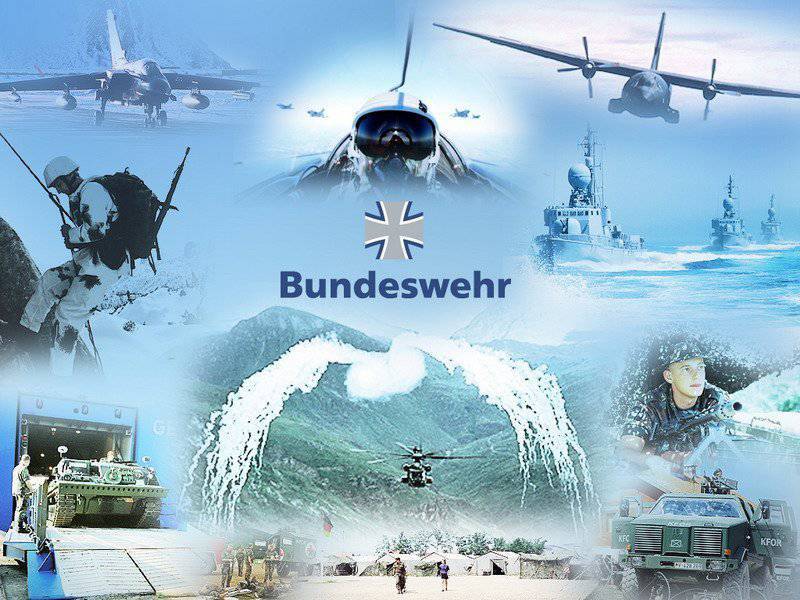 The economic crisis has not bypassed NATO's strike force in Europe - the Bundeswehr. The German army had to endure the unification of Germany, the reduction of military equipment and weapons, the abolition of universal military duties, the shortage of qualified military personnel. These circumstances led to significant changes in the German army. Today, according to analysts, the outpost of the North Atlantic bloc has become the leader of European pacifism and decay.

After the victory over German fascism, in 1949 a NATO military bloc was created. The Bundeswehr was at the forefront of confrontation with the countries of the Soviet bloc and was the main strike force of NATO. On the territory of western Germany, powerful groupings of military units of Great Britain, Canada, the USA, France, Belgium and the Netherlands were deployed. All combat units were combined in two directions - the ground forces and aviation army.

The unification of Germany in 1990 led to the strengthening of the military power of the Bundeswehr. The German army was armed at that time with about 7 thousand tanks, 9 thousand armored personnel carriers and infantry fighting vehicles, 5 thousand guns and mortars, a thousand combat aircraft. Germany also had equipment from other NATO countries: about 7,5 thousand tanks, 7 thousand infantry fighting vehicles and armored personnel carriers, 3,2 thousand artillery systems and more than 300 aircraft. Most of these weapons belonged to the American military contingent.

But all this was in the past. The German air armies and most of the land armies have already been disbanded. Military groups of Holland, France, Canada and Belgium have long been withdrawn from the territory of Germany. Three years later, the British military grouping would follow their example. The Americans had already withdrawn virtually all of their armed units — two tank brigades (without tanks) and 100 aircraft remained on German territory.

The Bundeswehr significantly reduced its own weapons - first sold off the military equipment of the former GDR, and then its own, and, moreover, fairly modern. The German government, throwing a large amount of decommissioned weapons onto the foreign market, simultaneously reduced the volume of government orders to its military-industrial complex, which put it in a very difficult position.

Despite the reduction of the military power of the Bundeswehr, German military pilots took part in the NATO operation in the Balkans, the Bundeswehr military group was transferred to Afghanistan, the German military was part of the peacekeeping forces stationed in Africa. The participation of German armed groups in military conflicts in the territories of other countries revealed negative trends occurring within the German army. Perhaps the consequences of these circumstances was the accelerated departure of the Germans from Afghanistan, non-participation in the Libyan operation of NATO, as well as the lack of desire to intervene in the Syrian conflict. Despite all the internal problems of the German army, it still remains the largest Western European army. But today it has already lost the status of the main striking force of the North Atlantic bloc in Europe.

Due to the current situation, Germany was forced to urgently begin to transform its armed forces. Reforming is carried out in three main areas: rejection of military conscription, reduction in the number of military units, and significant savings in the defense budget.

And although, in the military department itself, the opinions of specialists on the question of ways of reforming are far from unified, the Minister of Defense believes that it is necessary to implement the decisions already taken. The military leadership faces a very difficult task - not only to preserve the German armed forces, but also to prepare them for the performance of complex combat tasks in the new political and economic conditions.

New Minister of Defense of Germany, de Mezier, has to create a new German army in the absence of sufficient funding, a change not for the better in the demographic situation in the country, a lack of support for some influential political parties and an imbalance in the work of the administrative structures of the armed forces. German military experts believe that the structure of the Bundeswehr does not correspond to the modern level. As the experience of reforming the previous years has shown, selective adjustment of individual structural units is no longer acceptable - a comprehensive radical reform is required.

The measures taken by the leadership of the German military command to transform the army, for the most part, are based on the report of the inspector general of the Bundeswehr. The decision of the Federal authorities to reduce the military budget for 8 billion euros, as well as the decision of the Cabinet of Ministers to reduce the personnel of the armed forces to 185 thousand: 170 thousand should be personnel soldiers, contract soldiers 15 thousand volunteers made it very difficult. The reduction also affected the staff serving the army - twenty thousand civil servants were fired.

In the early stages of reform, the leaders of the Free Democratic Party, who insisted on the abolition of conscription service, had to accept a temporary compromise solution with opponents of this idea by the CDU / CSU Alliance: as a result, the conscription service life was reduced to six months instead of the previous nine. Many military experts have dubbed this decision as “trainee service”. The military leadership hoped that many recruits after completing their term of service would subsequently voluntarily remain in the army under contract. And indeed, about 8-mi thousands of recruits remain to serve further under the contract. But at the same time, ten thousand military personnel were engaged exclusively in the preparation of draftees. Since this recruitment practice did not lead to the desired result, at 2011, the German military command abolished the mandatory call-up for military service from 1 in July of the same year. At the same time, with the adoption of the law on the termination of conscription, voluntary military service was introduced by law with a contract duration from 12 to 23 months. It is assumed that about 15 thousands of volunteers will appear in the German army, who together with the contract soldiers and military personnel will form the personnel of the German armed forces. But this solution is quite difficult to implement. The military command understands that the recruitment to the "volunteer" part of the German army can be failed due to the lack of the necessary number of people willing to serve on the proposed conditions. In addition, the annual rotation of seventeen thousand military personnel and contract servicemen is also necessary. The labor market will not be able to provide the military with such a large number of professionals in conditions of tough competition with private companies. German legislators have not yet made a decision to ensure the attractiveness of military service, although such a program, consisting of their 82 points, has already been prepared by the military department.

As a result of such unhurried legislative action for several years now, the German army has been experiencing an acute shortage of specialists, including doctors and engineers. More than seven thousand posts in the army for a long time remain vacant. The Bundeswehr requires all military specialists to, above all, be professional in their field, withstand enormous workloads, have diplomatic skills, innovative thinking, be able to adapt to a dynamic environment, have the skill to analyze the situation and consciously make decisions about military service, understanding the existing risks of military professions. Since the German armed forces are involved in operations outside their own country, military personnel are required to respect intercultural and linguistic competence, as well as respect for ethical and balanced attitudes towards the indigenous population.

Bundeswehr military officials are well aware of the fact that the army will be forced to defend the country's security at the domestic level. And, therefore, the military will perform police functions. In this case, the soldier will need to perform not only the functions of a fighter, but also a diplomat, a social worker and a police officer. In order for the military department to obtain such specialists, it will take the authorities' efforts to increase the attractiveness of military service, as a promising place for career and professional growth.

But any reform requires the allocation of significant funds, especially such large-scale as the transformation of the armed forces of the most influential country in Western Europe.

The availability of sustainable funding is necessary, first of all, to attract qualified personnel from among the youth. Otherwise, the Bundeswehr will not cope with the task and the implementation of the reform will be impossible. Thus, the abolition of the call has already put the German military command in front of a problem in the fight against private business to bring into service a high-quality and professional workforce.

But as events have shown, it was precisely financing that became the Achilles' heel of the process of reforming the German armed forces. The military reformers are compelled, under the conditions of constant cuts in military spending, to develop a new compact structure of the German army, but with the obligatory condition that the possibility of a rapid response to situations related to defense and the security of the country remains. In addition, Germany is obliged to fulfill its obligations to NATO and the European Union.

The experience of the German military command and the results of the implementation of military reform by Germany provide food for thought, comparison and analysis in connection with the ongoing changes in the field of military construction in the Russian Federation. Unlike Russia, where the military leadership’s intention for military reform is still unknown, the German military can reasonably express their opinion on the activities being carried out and prove with conviction the necessity of every step of the transformations. It is not yet known whether the Bundestag will be able to carry out the decisions taken. But, after all, rarely transformations take place without unforeseen difficulties. In any case, the German military leadership will be able to make adjustments to their plans, depending on the situation. The ill-considered populism and political irresponsibility of the country's leadership can play a negative role in the process of Germany’s new military development. After all, even now, when the reform process is launched, it is clear that the combat capability and security of the country have been sacrificed for the fulfillment of another goal - financial savings. Such an approach could lead the army to lose its functionality and the inability to fulfill its duty to the people of the country and the European Union.

The experience of military transformation in Germany is valuable enough for the Russian military leadership. It would be a serious mistake to accept them unconditionally as a role model. But comparison, understanding foreign experience can serve the benefit of Russia in implementing the process of reforming the Russian armed forces.

Ctrl Enter
Noticed oshЫbku Highlight text and press. Ctrl + Enter
We are
New propaganda center of the BundeswehrBundeswehr without illusions
51 comment
Information
Dear reader, to leave comments on the publication, you must to register.