Russia with drones will not be late? 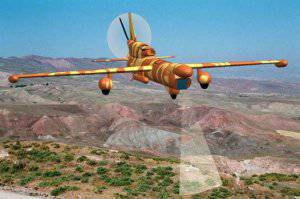 This year, the Russian Ministry of Defense will test several Russian-made unmanned aerial vehicles (UAVs) in trial operation mode. In total, next year it is planned to purchase about 10 complexes of the Orlan-10 complexes, as well as for the 20-25 samples of the Aileron-10, Swallows and Navigator-2 models.

The program of preliminary tests of the UAV "Eleron-10" (T-10), belonging to the class of small UAVs, ended a year ago. Flight speed range BLAH, 140 - 180 km / h, flight altitude - from 100 to 1000 m, flight duration - 6 hours, take-off weight 12 kg, wingspan - 2,2 m. The device starts using a pneumatic catapult, landing takes place on a parachute. The complex made in the Kazan company "Eniks" is intended for the solution of problems of air reconnaissance and observation. On the unmanned aerial vehicle the possibility of installing jamming equipment, repeaters, other equipment is provided.

The multipurpose Orlan 10 UAV complex developed by the Special Technology Center company is also primarily intended for solving reconnaissance tasks. The unmanned vehicle included in the complex has a take-off weight of up to 11,5 kg and a wingspan of about 2,4 m. The UAV can fly for up to 4 hours at a distance of up to 50 km from the ground control station. The complex allows simultaneous control of up to 4 BLA. In this case, any UAV can work as a repeater for the rest. The complex “Gunner-2” can have four types of UAVs of various weights, from 2 to 20 kg, with a range of information transmission within the direct range of 5 to 70 km. In the tables, the flight altitude is no more than 3.000 meters, the cruising speed is 50 km / h, and the maximum is 150-160. Finally, the “Swallow” of the Izhevsk company ZALA AERO has an 2 flight duration of an hour, an altitude of 3,6 km, a wingspan, a take-off weight of 4,5 kg and a speed of up to 165 km / h.

Russian President Dmitry Medvedev explained this turn to a domestic manufacturer as follows: “We had certain problems with unmanned aerial vehicles, we had to make a decision on the purchase of a number of foreign samples. As a result, the quality of our UAVs has improved significantly, because our manufacturers are afraid of losing this market. ”

The head of state noted that it was necessary to “not guarantee the cash backing, namely the identification of the most prepared producers as a result of competitive order placement”.

In general, plans to equip the Russian Air Force with drones look quite impressive. According to the Air Force Commander-in-Chief, Lieutenant General Igor Sadofiev, by 2020 it is planned to purchase 1,5 aircraft and modernize more than 400 aircraft and helicopters. And the number of unmanned aviation systems in the Air Force should account for 30% of all military aviation. Plus, in the Ground Forces, according to the staffing table, each brigade of the "new look" should have 16 tactical unmanned aerial vehicles (UAVs).

On the other hand, the Russian army in the issue of the equipment of the UAV is quite well behind the world leaders. For comparison, according to the 30-year plan for the development of the Air Force, developed by the Pentagon, in the next three decades, the number of drones in service with the United States should increase fourfold. Currently, the US military uses about 6,8 thousand of different types of UAVs. In turn, at the recent air show in Zhuhai, China presented more than 25 UAVs of its own production. In this case, the first unit was presented by China at the same air show just four years ago.

“Now it's hard to believe, but in the 50-80 years, it was our country that was the leader in the production of unmanned aircraft. Initially, these were remotely controlled targets with subsonic and supersonic speeds for Soviet fighter aircraft, at which our aces sharpened their combat skills, - says one of the reports of Rosoboroneksprtorta - Then reconnaissance unmanned aircraft appeared. Helicopter-type UAVs and systems based on tethered aerostats were developed. Since 1970-s began research work in the field of combat vehicles, as well as unmanned aircraft with high altitude and duration of flight, designed for long-term reconnaissance and use as part of reconnaissance and attack systems ... "However, at that time, these areas did not receive development. And at the height of the Cold War, the Soviet aviation industry was loaded with orders for the production of manned combat aircraft.

In the current situation, we are not talking about leadership in the field of drones. So far it is vitally important for the army not to lose the race.