13 2013 June
37
In June, 2013 marks exactly 50 years since the adoption of the famous sniper rifle by designer Yevgeny Dragunov - SVD to the Soviet Army. Work on the modernization of the system and testing of the new model in the framework of the design and development work on the “Warrior” project is planned to be completed in November this year. In the course of the modernization, the SVD should receive an updated trunk, as well as an additional Picatinny rail on the cover of the receiver, designed for the installation of a modern “body kit”. Also, the rifle will receive a folding telescopic bipod and a butt with adjustable ergonomics, said chief designer of the NGO Izhmash Vladimir Zlobin told reporters. As a result of the upcoming modernization, the sniper rifle will have to significantly improve its accuracy and accuracy characteristics.


In addition to work on the improvement and modernization of SVD, Izhevsk designers are working on the creation of fundamentally new sniper armament complexes, which should become worthy representatives of the enterprise in the 21st century. Work on the creation of a self-loading sniper rifle, intended for army snipers, was started in Izhevsk in the distant 1958 year and was assigned to Evgeny Dragunov. Thanks to serious knowledge in the field of small arms weaponsAs well as the experience of designing small arms and sports skills, Dragunov managed to create the most heaped and reliable self-loading rifle for army snipers.

In June, the 1963 of the SVD was adopted by the Soviet Army. Over the full 50 years of its existence, this rifle has gained worldwide recognition and widespread distribution - today, the SVD is used in army units of more than 30 states. Experts believe that the SVD is the best sniper weapon of the twentieth century. For many years after adopting a rifle into service, it remained one of the most secret types of small arms in the USSR; in the west, the first samples of this rifle could be obtained only during the war in Afghanistan. 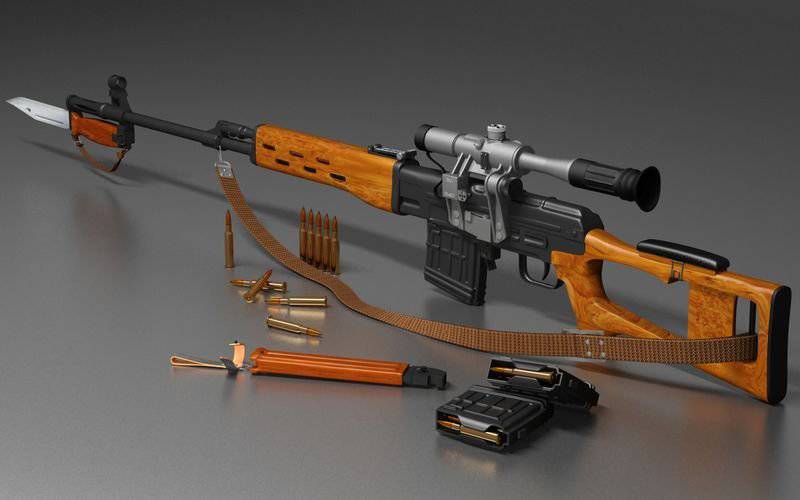 The SVD is a semi-automatic rifle, the mechanism of which uses the energy of powder gases, which are discharged from the hole in the barrel bore. Locking is done by turning the shutter, as on the legendary AK, but not on the 2, but on the 3 side stops. This makes locking the barrel more reliable and positively affects the accuracy of fire. At the same time, when creating a sniper rifle, Evgeny Dragunov had to face a number of mutually exclusive requirements. On the one hand, the rifle had to ensure high accuracy of fire, and on the other hand, strict requirements were placed on it for reliability, which led to an increase in the gaps between the parts of the rifle, which in turn had a bad effect on accuracy. However, the compromise found during the development became a guarantee that from the beginning of the 60s of the last century to the present day, the combat capabilities of the SVD remain at the level of the best self-loading rifles in the world.

A well-trained shooter is able to conduct aimed fire at a distance of up to 500 meters, and the accuracy of shooting at the same time reaches 1,04 angular minutes. With the SVD sniper cartridge in their hands, the shooter is able to hit the following types of targets at the first shot: head - 300 m., Chest figure - 500 m., Waist figure - 600 m., Running man - 800 m. Standard Sight PSO-1 is calculated firing at a distance of up to 1300 meters, but at such a range you can effectively shoot only at group targets or disturb fire.

It is worth noting that the SVD is not a sniper rifle in the traditional sense. Its main purpose is to increase the range of effective fire of the motorized infantry unit to 600 meters, to provide soldiers with the necessary rifle support (suppression of firing points, etc.). Therefore, this rifle had no reason to have the range and accuracy of traditional sniper rifles. Its place is a place in the composition of ordinary motorized rifle units, rather than special units. 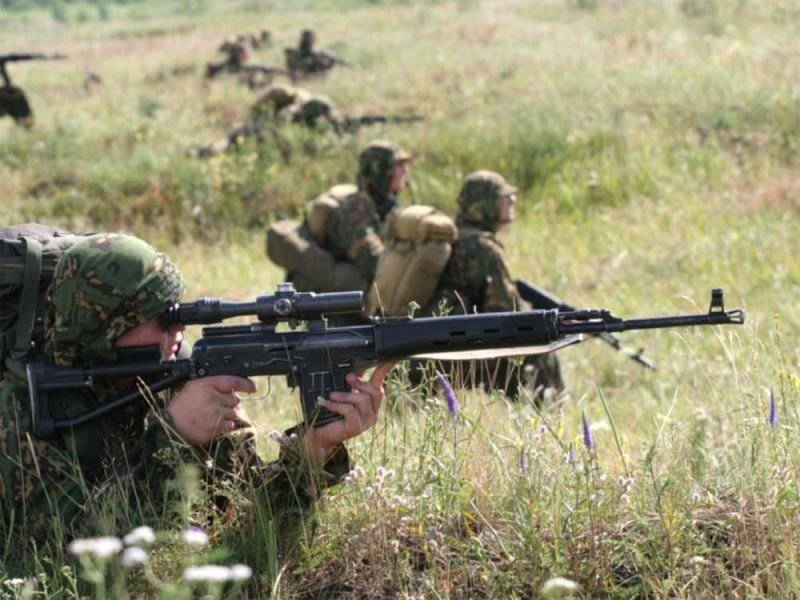 Creation and principle of operation

The Dragunov sniper rifle (SVD) was adopted by the USSR Army in 1963 after a design team led by Evgeny Dragunov won a tender for the development of a self-loading sniper rifle for the army that started in 1958. In addition to Dragunov himself, such famous designers as Barinov, Konstantinov and Kalashnikov took part in the competition. The latter represented a sniper rifle at the competition, which was developed on the basis of the AKM, converted for firing rifle cartridges. At the same time, the CB-58 rifle, which was represented by the hereditary gunsmith Dragunov, was the best in accuracy and accuracy. Later, on the basis of this rifle, taking into account the wishes of the members of the commission, the world-famous SVD rifle was created.

Especially for the new rifle was developed sniper cartridge, equipped with a bullet with a steel core, while the SVD can use the entire range of domestic ammunition caliber 7,62x54 mm. In the standard version, it is equipped with a PSO-1 sight. It was created in 1963 year specifically for this rifle and at that time was the most technically advanced optical device, which was manufactured in large quantities by the Soviet industry. Its design feature was a very successful aiming grid, which allowed the sniper to quickly determine the distance to the target and take the necessary horizontal corrections during firing without rotating the flywheels.

SVD can also fire cartridges with expansive JSP and JHP bullets. In this case, the fire from a rifle is conducted by single shots. The firing of ammunition for shooting is carried out from a box magazine for 10 cartridges. A flame arrester equipped with 5 th longitudinal slots is installed on the muzzle of the barrel, which masks the shot during night combat operations and also protects the barrel from contamination. The presence of a gas regulator on the rifle to change the rollback speeds of moving parts has a positive effect on the reliability of the weapon. 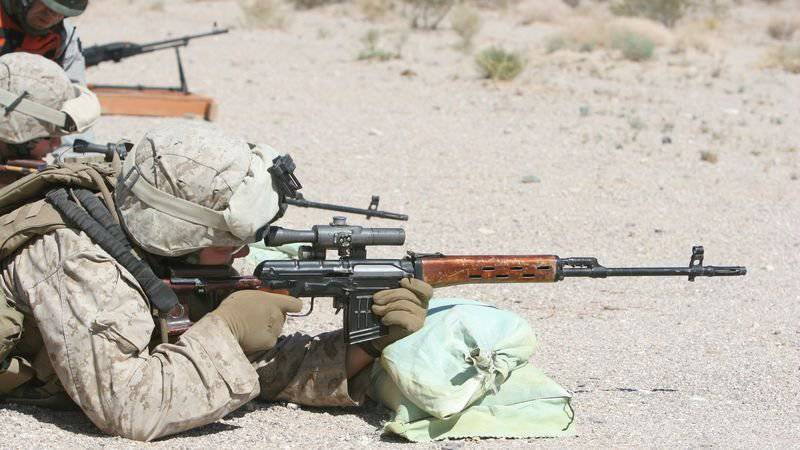 Distinctive features of this sniper rifle are the butt of a skeletal structure, the location of the fuse and the stamped receiver. Unlike the absolute majority of sniper rifles in the world, the SVD was also equipped with a bayonet. During the Afghan campaign there was a need to create a folding modification of the rifle for the assault and motorized infantry, and Evgeny Dragunov creates a version of the SIDS, which differs by a shortened barrel - 590 mm., Shortened by a flame arrester and a strong metal butt that folded on the right side.

Automatic sniper rifle acts by removing powder gases through a special hole in the wall of the barrel. The barrel is locked by turning the bolt counterclockwise. Unlike the famous AK (the locking takes place on the 2 combat stop by turning the bolt clockwise), the patrol rammer is used as the 3 combat stop, which allows you to increase the combat area by the same angle of rotation and the same transverse dimensions stops. The presence of 1,5-x support surfaces ensures a stable position of the shutter, which in turn helps to increase the accuracy of fire.

At the moment of firing, part of the powder gases that follow the bullet rushes through a special venting hole in the barrel wall into the gas chamber, after which it presses against the front wall of the gas piston and throws it out with pushing, and with the piston and the slide frame into the rear position. At the moment the bolt carrier retracts the bolt opens the barrel bore, at this moment the sleeve is removed from the chamber and ejected from the receiver outside, and the bolt carrier compresses the return spring and cocks the trigger (puts it on the self-timer platoon).

Under the action of the return mechanism, the slide frame with the bolt returns to the front position, while the bolt sends the new cartridge from the magazine to the chamber and closes the barrel bore, while the slide frame removes the self-release sear from the cockpit of the self-trigger cock. The bolt is locked by turning it to the left and placing the bolt lugs in special cuts in the receiver.

In order to make another shot is required to release the trigger and click on it again. After the trigger is released, the thrust moves forward and its hook picks up on the sear; when the trigger is pressed, the hook hook turns the sear and disconnects it with the hammer of the trigger. The trigger, making a turn on its axis under the influence of the mainspring, strikes the firing pin, and he, in turn, moves forward and puncture the primer and the subsequent ignition of the cartridge. Shot occurs.

At the moment of firing by the last cartridge, when the shutter comes back, the magazine feeder raises up the shutter stop, the shutter rests against it and the slide frame is fixed in the rear position. This is a signal to the shooter in order to recharge the sniper rifle.

According to the majority of military experts, the SVD was very well designed ergonomically: the weapon is balanced, gives the shooter full confidence, and is easily maintained when conducting aimed fire. Compared with ordinary shop sniper rifles, the practical rate of which is at the level of 5 shots per minute, SVD, according to experts, allows you to ensure the rate of fire up to 30 targeted shots per minute. The Dragunov sniper rifle has been widely used in almost all combat operations that were carried out first by the Soviet and then Russian armies since the rifle was adopted. During this time, the SVD has shown itself to be exceptionally easy to use and reliable small arms.