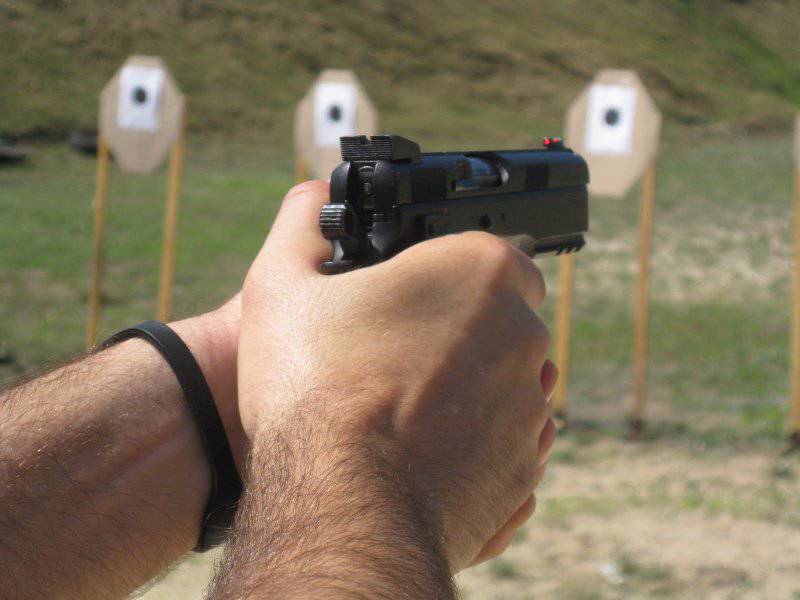 The Federal Security Service (FSB) is the most powerful special service of the Russian Federation. From 2003, the Border Guard Service of Russia has been transferred to the FSB. The task of the FSB is to ensure the security of the country, society, the state and each individual. The FSB is a federal executive body directly subordinate to the President of the Russian Federation. The FSB carries out its work in several areas: intelligence and counterintelligence activities, the fight against crime.

This year, the twentieth anniversary of the Grad division of the St. Petersburg Department of the Federal Security Service of Russia is celebrated. Therefore, not by chance, but as a sign of respect for his colleagues, the next FSB practical shooting championship weapons was held at the end of April 2013, in the village of Sertoletovo, located near St. Petersburg.

Championships, with the participation of officers of the combat units of the Russian special forces are held several times a year. It is always quite difficult for participants to perform the tasks of the organizers of the competition - after all, they have to work out combat techniques, in full protective gear and with military weapons. Experts prepare tasks for participants so that they can not only show their skills and professionalism, but also gain new experience in combat operations. Each trifle in the performance of tasks is important, because the experience gained can save, in a real situation, more than one human life.

The fact that the special forces of the FSB of Russia often organize such championships speaks of the importance of such training and competitive events. For example, in 2013, five such championships have already been held. All participants in the competitions of special-purpose combat groups recognize that this type of competitive training enables each unit to learn well-coordinated group work in combat operations, improve their professional level, exchange best practices with their colleagues, and improve their mastery of military weapons.

The organizers of the championships always strive to achieve in order to bring the conditions and complexity of the performance of competitive tasks closer to the real ones. The weapons used in competitions are the most modern: from pistols and rifles to grenade launchers. As the experience of conducting combat competitive training shows, participants prefer foreign types of weapons: American, German. Special Forces consider it more reliable, versatile and practical. Each of the participants should demonstrate their ability to handle these types of weapons as successfully as possible.

As a rule, participants demonstrate their skills in various types of exercises. Moreover, the goal of each competition is not only to show the skills of each fighter, but also the ability to effectively interact in a group.

The subjects are required to make concrete decisions in the shortest possible time. The championship rules provide for instructions before the start of the competition and discussion with the team members about the best ways to complete the tasks. To perform the exercises in any championship is not enough good fire training, requires good memory and attention. The most important task is always an exercise to free hostages in a vehicle. As a rule, the group receives an introductory task a few seconds before the start of the test assault. It is required to very quickly identify the people who took hostages among the passengers and destroy them. The rules of execution are very strict - when they are taken hostage, the participant is disqualified.

This year, the organizers of the championships have changed the rules of competitions of previous years. The main focus was not on assessing the individual skills of each participant, but on the skill of acting in a team. For approaching competitors to real conditions, the competition is held not only during the day, but also at night. Not many can pass all tests.

Most often, fighters from the Vympel and Alpha divisions become leaders of the spetsnaz squad championships. But this does not mean that fighters from territorial divisions are less professional. For example, this year the special forces officers from Nizhny Novgorod and Krasnodar proved themselves to be well tested.

The organizers of the spring championship tried another novelty - a civilian team consisting of masters of sports and champions in practical shooting participated in the competition. This allowed the military and civilian experts to exchange new methods of handling weapons, to test the new equipment, to test together new types of weapons.

But the special forces fighters participate not only in the all-Russian competitions. For example, the team of the Alpha division took part in the open world championship among special divisions in 2011 and won, beating even the hosts of the championship - the Americans. Alfovtsy in the 11 fighters won the first place in the overall standings, receiving the title of the best team. In the sniper shooting competition, the Alpha Special Forces ranked second.

Personally-team shooting competitions with a machine gun among the special purpose units of the FSB, dedicated to the memory of Colonel A.V. Volosnikova. The aim of these competitions is to improve the fire training, the exchange of best practices with the best shooters, as well as to stimulate the development of military-applied sports.

Conclusions that experts make after the completion of each competition, help to plan the further combat training of special forces units of Russia. Fighting units, like air, need combat training as close as possible to the actual combat situation.

But the real exam special forces will pass the life itself, which will test their professionalism in the course of real combat operations.

Ctrl Enter
Noticed oshЫbku Highlight text and press. Ctrl + Enter
We are
"Army Games". Masters ABT. Part 2. The trick versus professionalismMilitary doctrine of the Russian Federation
13 comments
Information
Dear reader, to leave comments on the publication, you must to register.