13 2013 June
43
I think that everyone knows about the M16, since it is very often opposed to the Kalashnikov assault rifle. It's no secret that the main problem of the M16 as a mass weapons is an automation system, which took a very long time to achieve acceptable results. Maybe not everyone, but many also know that the M16 is a very close relative of AR-15, you can't call a twin, and an equally close relative of AR-10, but this is not the whole family of weapons. We will talk about one of the samples, which is also related to these machines, in this article, namely about AR-18, also known as “Widowed”.

A weapon with such a loud name could well be an emergency replacement for the M16, as it had a lot of advantages, the main of which was an automation system with removal of powder gases from the barrel with a short piston stroke, and not a direct impact on the slide frame. It should be noted separately that the weapon even competed with the M16 for adoption by the US Army and successfully passed all the tests, but preference was given to the Koltovskaya M16 and, it seems to me, in vain. After the US Army refused this model of the right to manufacture it, they decided to sell it to another company, but again nobody was interested in the weapon, although it had no obvious shortcomings. Only Japanese company NOWA became interested in AR-18, as a result of the right to manufacture and modernize it was sold to her. But the Japanese company did not produce weapons for long, just a little more than 4 thousands of weapons were produced. It seems like they forgot about the weapon, but the British company Sterling became interested in AR-18, which subsequently produced the most of these weapons and continues to manufacture them now.

Personally, it is completely incomprehensible to me why this model of weapon did not receive the attention of the military; in reliability, the simplicity of production of the AR-18 considerably surpasses the first M16, namely, the designers sought to do so. The main goal in the design of weapons was to create a model capable of competing with the Kalashnikov assault rifle at the cost of production (meaning not the first "golden" AKs with a fully milled receiver), while not inferior to it in reliability. And the designers managed to achieve this goal. The weapon was designed so that its production could be adjusted anywhere, with a minimum equipment base, and this is a huge plus for any weapon. It was decided to abandon light alloys, as a result, the production became simpler, but the weight of the device increased, which apparently caused the loss of the M16 competition. All the details and even the butt had a simplified form and could be easily made of wood in the absence of plastic and so on. 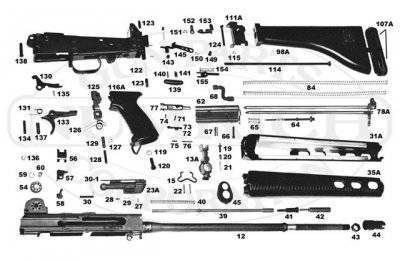 The weight of the weapon could reach 3 kilograms, which, in my opinion, quite a bit. The length of the barrel machine was 457 millimeters, the total length of the weapon is 965 millimeters with the butt folded and 738 millimeters with the folded. It feeds weapons from detachable box magazines with a capacity of 20, 30 or 40 5,56x45 ammo, the rate of fire of 700-800 per minute. The main scope is dioptic, but it can also be installed differently, including riflescopes. Officially, there are 4 weapons models: AR-18 - the basic version of the device; AR-180 - deprived of the ability to conduct automatic fire; The AR-18S - the barrel was shortened to 257 millimeters and the AR180B - updated 2002 model of the year with a fixed butt, with a plastic lower part of the receiver and a trigger mechanism from the AR-15.

Naturally, it is easy to say that there are few good weapons, we need the facts of their successful use in military operations and they exist. Of course, they are not so large in view of the fact that weapons are not widely spread, but they exist. The most important of them is the use of weapons in the Irish Republican Army, where the apparatus and got its nickname "Widowed" and quite deserved, well, how many widows left this weapon can not exactly count, but not enough. You can, of course, say that this was a move of intimidation, and that there were no elementary weapons, but nevertheless, AR-18 is an excellent model that was completely ignored. But do not forget that this weapon was the basis for many other more common samples.