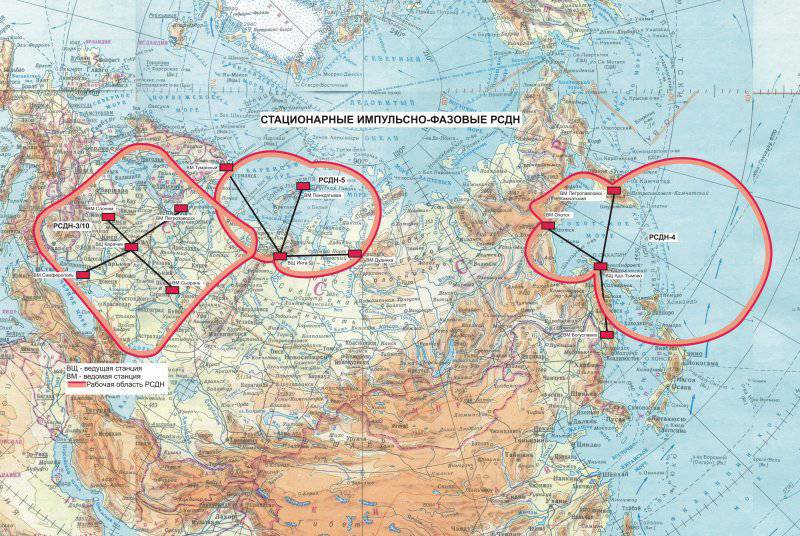 In order to ensure traffic safety in air, land and sea transport, as well as solving a number of special tasks on the basis of Government decrees, a long-range radionavigation support system (DRNO) was created in the Soviet Union.
DRNO is designed to create conditions for combat use aviation in theaters of operations, operational directions and in military-geographical areas, as well as aircraft navigation during all types of flights.

The main objectives of DRNO are:
ensuring the resolution of combat missions by aviation in the tactical, operational and strategic depth of the enemy;
ensuring the solution of combat training tasks by aviation associations, formations and units;
providing flights of aircraft on the best routes, over the orientation-free terrain, waters of the seas and oceans;
flight safety of aircraft.
The use of long-range radio navigation equipment provides the following tasks for aircraft aviation:
the use of aviation weapons;
landing;
air reconnaissance;
overcoming the enemy's air defense zone;
interaction with ground forces and forces fleet.

Currently, the main means of the DRNO Aviation of the Armed Forces of the Russian Federation are radio engineering systems for long-range navigation (RSDN). RSDN are designed to determine the location of moving objects at any time of the day and year with unlimited bandwidth in a given area of ​​coverage.

The high efficiency of these systems has been confirmed by more than 30 years of experience in their operation, including in conditions of local armed conflicts in Afghanistan and the North Caucasus, where in conditions of mountainous and non-oriented terrain RSDN were often the only means of correcting flight-navigation complexes for solving problems air navigation and combat use.

The structure of the ground station RSDN includes:
control and synchronization equipment;
radio transmitting device with power from 0.65-3.0 million Watts (per pulse);
common industrial equipment (autonomous diesel power plant with 600-1000 kW power, air conditioning, communications, etc.);
the center of service of uniform time of high accuracy - SEV VT. It is equipped with a complex of equipment that creates, stores and broadcasts to the transmitting device for emitting temporary second marks on the air. The basis of CEB VT is the atomic frequency standard, which generates highly stable electromagnetic oscillations with relative instability 1х10-12. Time keepers form time sequences: seconds, minutes. five minutes, etc. The time stamps of the station are “tied” to the national time scale. These signals are used when launching spacecraft, in navigation, geology, geodesy, etc.

The first long-range radio engineering system, in the former USSR, RSDN-3 / 10, was created after the modernization of the RNS Meridian and Normal. It was commissioned as part of the Air Force at the beginning of the 70 of the last century.

The RSDN-3 / 10 includes 5 distant radio navigation stations (DRN): three stations are located on the territory of the Russian Federation (the settlement of Karachev, the settlement of Petrozavodsk, the settlement of Syzran), one station in Belarus (n P. Slonim) and one station on the territory of Ukraine (settlement Simferopol).
After the collapse of the USSR, the RSDN-3 / 10 operates in accordance with the intergovernmental Agreement on Long-Range Radio Navigation Support in the Commonwealth of Independent States of 12 in March 1993. According to Article 2 of this Agreement, its participants recognized the need to preserve the radio navigation systems operating in their territory, as well as the existing order of their activities.

The analogue of the domestic VDN (Chaika) abroad is the Loran-C radio navigation system (RNS) (USA).

Beginning of 90's last century was marked by the rapid development of satellite navigation systems (SNA). Global Positioning System (Navstar GPS) was created in the USA. In the Soviet Union, the global navigation satellite system (GLONASS) called "Hurricane" was widely developed. SNA was distinguished by high accuracy in determining the coordinates of moving objects (dozens, and in some cases, units of meters), the creation of a global radio navigation field, the possibility of obtaining three-dimensional coordinates on board a moving object. RSDN parameters were more modest: the accuracy was 0,2-2,0 km., They had a limited working area. For example, the working area of ​​the European RSDN-3 / 10: the water area of ​​the Barents Sea - the water area of ​​the Black Sea and the Ural Mountains - Germany. The SNA, thanks to its unique parameters, created the impression that the time of the ground RSDN has passed. However, after the tests of the SNA for noise immunity and stability of work, disappointing results were obtained. The fact is that in determining the location of objects in the SNA noise-like signals are used. Suppress such a signal in the area of ​​aviation does not represent a great technical complexity. It seemed that the output in the integrated use of these two types of navigation: European experts went down this path. They created the Eurofix control and correction technology, a system for sharing RSDN and SNA. We go our own way. And so, in the area of ​​the village of Taymylyr, a unique structure was destroyed, transmitting an antenna of 460 height m. Almost the Ostankino tower beyond the Arctic Circle. Instruments and equipment are simply abandoned. The creation of an exploded object was spent 175,2 million (Soviet) rubles.

As it became known, the subsoil of the Arctic Ocean is fraught with enormous reserves of natural resources. One can foresee the struggle of the polar states (and not only them) for these riches. It is clear that navigational aids in this region will play a decisive role in the future. Therefore, means of radio navigation support in the Arctic region should be maintained.