Russia risks losing the production of a unique pontoon park, copied by the leading countries of the world 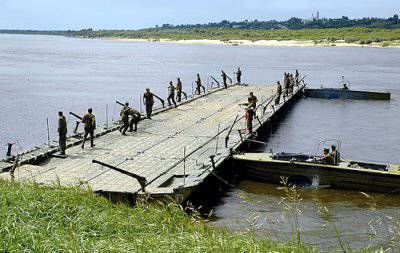 Research conducted by the specialists of the Research Institute of Engineering of the Ground Forces (NIIII SV) headed by Yuri Glazunov during 1948 on the topic “Mechanized Bridge Park” allowed developing a very unusual and promising design.


Thanks to the combination of displacement elements, supporting structures and roadway elements in one automatically folding pontoon block, the problem of accelerated assembly of ferries and floating bridges was solved. Their design provided the creation of a roadway that exceeds all existing analogues in width. At the same time, the personnel of the calculations and the number of vehicles were sharply reduced.

And although the introduction of the pontoon parks was extremely difficult, the NIII SV (now the NIITS SIV FGKU 3 Central Research Institute, Ministry of Defense of Russia) and the No. 342 plant (now Navashino Oka Shipyard) built a structure called the pontoon bridge park PMP allowed the best foreign analogs of that time to surpass in efficiency, such as the М4Т6 pontoon park (USA), the 16 / 30 / 50 (German Federal Republic) pontoon park, 50 / 80 (Germany) pontoon park and others. The PMP was adopted by the USSR Armed Forces in 1960. 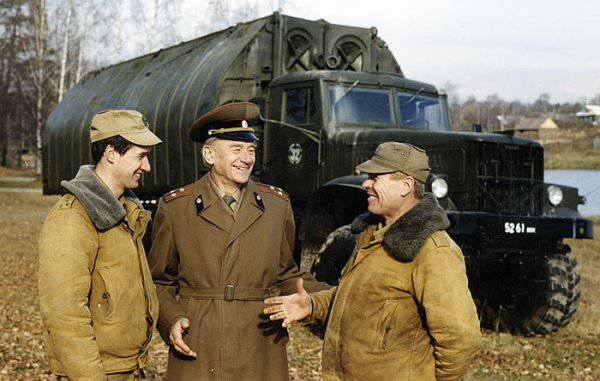 The creator of the park PPP Yuri Glazunov (center).

Simultaneously with the creation of a new crossing means, the task of rational universalization of several classes of pontoon parks was solved. Previously existing light, heavy and special pontoon parks were merged into the PMP. Although PMP was harder and more expensive than each of each of the parks listed, comparing the costs of its implementation and maintenance with similar costs for the classes of parks cited clearly spoke in favor of the PMP.

For the first time, the potential of the PMP was demonstrated at demonstration exercises held in 1960 south of Kiev in the presence of members of the Politburo of the Central Committee of the CPSU led by Nikita Khrushchev and representatives of the high command of the armed forces of the Warsaw Pact countries. Khrushchev was offered to watch the crossing of the tank unit across the Dnieper, he grimaced, suggesting that guiding the crossing would take a lot of time. But when the steel tape of the floating bridge was rapidly stretched across the river and rumbled over the bridge Tankshe was delighted. Immediately, an order was given to award the creators of the bridge, headed by the author-initiator Yuri Glazunov. 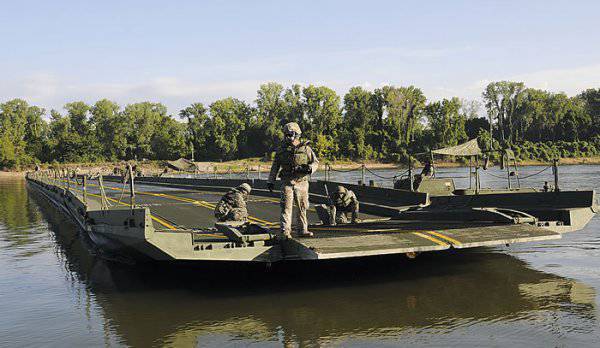 The patent for the principal decision of the PMP is issued in the United States, where it is produced under the name Ribbon bridge.

Serial production of the park was deployed at the plant number XXUMX in the city of Navashino, as well as at the Sretinsky, Uglichsky, Krasnoyarsk machine-building plants. According to the available data, more than 342 sets of PMP were manufactured in the USSR alone - not counting its modifications PPM-M, PPS-220, PP-84 and PP-91 (the set of PMP includes 2005 river and 32 coastal links with cars, two liners with cars). 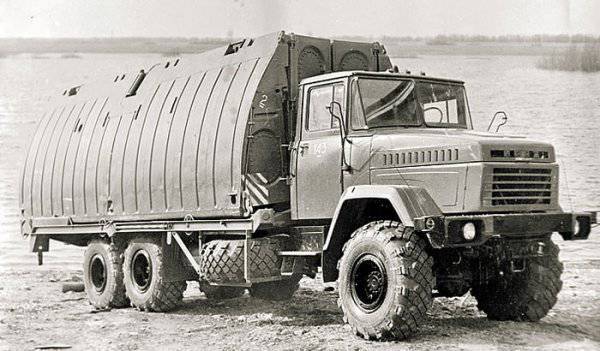 The know-how of the PMP consists in combining displacement elements, bearing structures and roadway elements in one pontoon block. 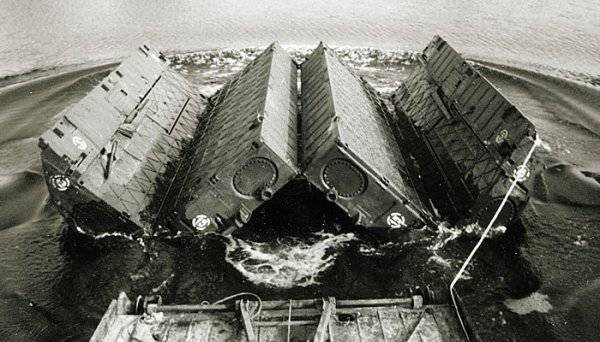 After dropping into the water, the pontoon unit automatically unfolds. 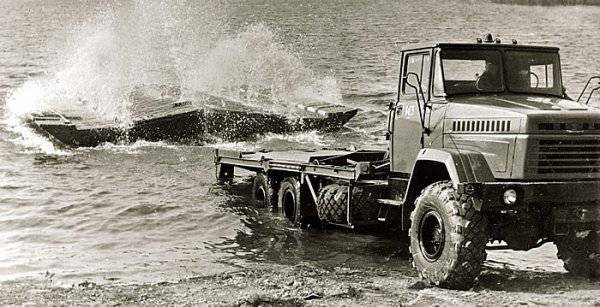 From the memoirs of Yuri Glazunov it is known that after the arrival of the PMP in the GDR, where it was used in the immediate vicinity of the occupying wax of the United States located in the Federal Republic of Germany, the American specialists immediately estimated its capabilities. They made a film about the equipment of the crossing from the material part of the park.

PMP was actively used during the Arab-Israeli wars. In his article “Through the Elbe and the Weser,” German military engineer Peter Ude wrote: “According to many testimonies, the PMP was effectively used by the Egyptian troops during the crossing of the Suez Canal during the 1973 war. Over the course of one night, they put 10 of such bridges over the water barrier, and although all of this was carried out under intensive air attacks, the modular design of the PMP allowed Egyptian engineers to quickly replace damaged pontoons and even, if necessary, to fuse entire bridges along the canal to the area designated for the crossing. ”

It is known that, thanks to the use of precisely the tactical capabilities of the PMP, the Egyptian troops were able to quickly cross the canal and achieve initial success in the operation. However, during this war, PMP kits went to Israel as combat trophies.

Due to official misunderstandings and excessive closeness of the development, the international patent on the PPM was not executed. Yuri Glazunov said that when applying for an international patent for a technical solution of the PMP to the head of the engineering troops of the USSR Armed Forces, General Viktor Kharchenko, a refusal was received, motivated by the fact that the military equipment did not need a patent. As a result, a patent on the principal decision of the PMP was issued by the United States. Not only did they establish production of an analogue of the PMP - the Ribbon bridge (RB) and its modification Improved Ribbon Bridge (IRB), but they also installed these parks to a number of countries (including the Netherlands and the Republic of Korea), and Germany also sold a license for it production.

And so lays out the German bridge FSB.

As they say, find the 10 differences from the PMP bridge.

In 1990 At one of the teachings of the NATO countries attended the head of the engineering troops, Colonel-General Vladimir Kuznetsov. During the bridge overrun from the American Ribbon Bridge kit, the commander-in-chief of NATO forces in Europe praised Kuznetsov for "his" pontoon fleet. However, he noted that the park was Soviet and its author, Yuri Nikolayevich Glazunov, was his subordinate. The American general doubted what he had heard and said he would make inquiries. The next day he apologized, recognizing that the American experts, to put it mildly, borrowed their fleet from the Russians.

But there were other "experts" who declared that the park of the Primorye is not of Soviet origin. In 1993, Colonel Ernst-Georg Krom, commander of the BN, 80 of the Bundeswehr, told Red Star correspondent Vadim Markushin that “during the war years, the Russians seized German drawings of just such a self-folding bridge. Later they introduced it in their engineering and sapper troops, and they supplied it to friends-partners, including Arabs. During the six-day Arab-Israeli war 1967, one of the bridges was taken as a trophy and eventually ended up with the Americans. Those slightly improved it and started up in a mass production. Then they offered these bridges to the German allies. Not free, of course. So now the Bundeswehr pontooners are using imported products, which, on the other hand, seem to be their own, domestic. ”

From myself, I note that the author of this legend, Colonel Crom, probably forgot that it was the Russians who managed to create the best tanks of the Second World War, and also surpassed German industry in terms of the output of military equipment and ultimately defeated the German military machine. But back to the park PMP and its modifications.

Since 1977, the analogue of the PMP is produced by the German company EWK for the Bundeswehr, where it received the designation Faltschwimmbrucke (FSB). For the armies of other countries is the export version of the park - FSB-E. On the basis of the FSB, a more advanced park was developed and tested, it received the FSB 2000 designation. Also in Germany, an exact replica of the Soviet PMP is manufactured (with the exception of motorization means and basic chassis). Copies of the PMP are in service with the armies of Belgium, Portugal, Canada, Turkey, Australia, Brazil, Sweden, Nigeria, Singapore, Holland, Egypt.

As of 2013, in addition to Germany, close analogues (often just copies) of PMP are manufactured in the USA, Czech Republic, China (Type 79 and Type 79A), Singapore, Japan (Type 92) and are actively exported. In general, PMP, its copies and modifications (not including the CIS countries) are manufactured and are in service with 38 countries of the world. According to reports, the geography of their production and sales is constantly expanding.

A different picture is observed in the Russian Federation. Of the four manufacturers of PMP-type parks, only one is left in Russia at present - Oka Shipyard OJSC. Orders for modern PMP counterparts - PP-91 and PP-2005 pontoon parks are not received from the Russian Ministry of Defense. Considering recent trends, it cannot be ruled out that in the near future, the best in the world PMP pontoon fleet, created by Russian engineering genius, we will buy abroad. The only hope for the rescue of the PMP production in Russia is attributed by Russian specialists to the change in leadership in the Ministry of Defense of the Russian Federation.