Frigate "Freedom": an application for success


VPC weekly published materials related to the coastal zone warship development program (BKPZ) LCS (Littoral Combat Ship), in particular in No. 8 for 2012 year. The US Navy has just started accepting and testing new Freedom BKPZs, but in fact the marketing campaign has already begun.

The 9 International Maritime Defense Exhibition and Conference IMDEKS EUSHA-2013 (IMDEX ASIA), which took place in Singapore from 14 to 16 in May, was attended by 15 warships from nine countries. The number of ships on display at the Changi naval base included patrols, frigates, corvettes and destroyers from Australia, France, India, Indonesia, the Republic of Korea, Malaysia, Singapore, Thailand and the United States. For the first time at the international show, the leading American BKPZ Freedom, created by Lockheed Martin according to the LCS-1 concept, was demonstrated.

If we consider that in November 2012 at the Euronaval-2012 naval salon, Lockheed Martin for the first time demonstrated the LCS multi-purpose BKPZ model for foreign customers, the first demonstration of its Freedom ship at the Singapore showroom can be considered the beginning marketing campaign to promote the concept of LCS on the world market. 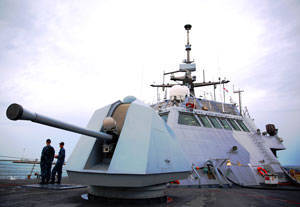 LCS is a new generation of US Navy surface ships that can operate on the high seas, but are adapted to carry out a wide range of combat missions in the coastal zone. Among the main functions of LCS patrol, protection fleet from the attack of small surface ships, the fight against low-noise submarines, mine action, reconnaissance, support for the operations of special operations forces. Due to the fact that the ships are designed using a modular concept, each of them can be redesigned to fulfill any of these missions in a short time. The construction of LCS ships is carried out by two main contractors for two alternative projects. The LCS-1 series is created for the US Navy by Lockheed Martin, the LCS-2 is created by Ostal USA.

The lead ship of the LCS-1 Freedom (Freedom) series is not only demonstrated in Singapore to countries of the Asia-Pacific region, but will remain there for eight months, operating in the area of ​​responsibility of the US Navy's 7 fleet. According to the US Navy, the ship’s participation is planned not only in the IMDEX EUSHA saloon, but also in CARAT (Cooperation Afloat and Readiness and Training) exercises in Southeast Asia together with regional armed forces, as well as in SEACAT (Southeast Asia) exercises. Cooperation and Training).

On board there is currently an enhanced crew of 91 people, including 19 specialists to perform tasks against surface ships, as well as aviation unit of the 73rd attack helicopter squadron HSM-73 (Helicopter Maritime Strike Squadron 73). However, the base crew has 40 people, to which are added the calculations of combat modules and the composition of the wing. In total, only 75 people can be based on the ship, which is associated with increased automation of on-board systems and the need to reduce operating costs.

Freedom LCS-1 was developed by Lockheed Martin and belongs to the frigate class. It is a single-hull semi-gliding ship with a steel hull and an aluminum superstructure. Structural protection is local, the superstructure and elements of weapons are made using stealth technology. Crew protection provided against weapons mass destruction. LCS-1 was laid out at the Marinette Marine shipyard in 2004, launched at the end of September on 2006, put into trial operation in 2008, and is armed with the US Navy with 2011. The second ship LCS-3 was laid in 2009 year and delivered in 2012. The third LCS-5 was laid down in 2011, LCS-7 is also being built, construction contracts for LCS-9 and LCS-11 have been issued.

The cost of the first LCS-1 type frigates exceeds 500 million dollars, but according to the decision of the US Congress the price of subsequent ships is limited to 460 millions. It was supposed to build up to 2030 for 12 billions of dollars of 60 frigates of the selected LCS variant (LCS-1 or LCS-2), but the crisis and rising cost led to a reduction of the program to 52 ships.

The length is 115,3, the width is 17,5, the draft is 3,9 meters, the total displacement is about 3089 tons. The ship is equipped with a combined four-shaft diesel-gas turbine power plant with a total power of 113 thousand horsepower with four jet propulsion, which allows the LCS-1 to reach speeds of up to 45 nodes and make transitions to a range of 3500 nautical miles at a speed of 18 nodes.

Two anti-submarine MH-60B / F helicopters or one MH-60B / F helicopter and two or three carrier-based unmanned aerial vehicles (UAV) can be based. The LCS-1 armament includes the 57-mm Mk.110 gun, a self-defense system against SeaRAM anti-ship missiles with RIM-116 missiles, created on the basis of the 20-mm Mk-15 Mod.31 anti-ship missile system Mk-XNUMX Mod. anti-submarine version, robotic boats for search and destruction of mines, as well as protection from small fleet vessels. The ships will be able to receive and transmit tactical information within the network structure to other ships, aircraft and submarines of the US Navy.

It is possible to consider as placing in the aft end of promising LCS type ships a special lift-slip or a small dock-chamber for launching and receiving the ship’s craft on the move and with sufficiently developed waves. In the LCS project, another very efficient modularity technology is implemented. This technology was developed in the middle of 70 by the German company Blohm und Voss AG. She received the name MECO (Mehrzweek Kombinationschiff - multipurpose combined ship). This technology involves the design of various versions of the ship platform (1000 – 4000 tons) and the manufacture of all weapon systems, the main power plant and other systems in the form of standard functional modules (FM); installation of these FM in the prepared cells; ease of replacing modules with outdated weapons with new FM. Having developed a certain number of types of FM, you can not make them in advance, and store only the technical documentation, which ensures rapid design of various options for the ship in accordance with the requirements of the customer.

Later this technology was developed during the creation of the LCS program ships. The essential difference of this technology from the previous one is that FM for various purposes can be installed at the basing point, which allows you to quickly change the functional purpose of the ship. Combat kits and corresponding personnel are combined into combat modules (BM). The first BMs were developed for solving the problems of anti-mine, anti-ship, anti-landing and anti-submarine defense.