7 2013 June
21
Eurocopter, known in the aviation world, presented its new single-rotor Eurocopter EC130 Т2 helicopter in Russia and Ukraine as part of the demo tour. The novelty has demonstrated its improved technical characteristics to the public. The helicopter was shown in various cities from Moscow to Voronezh, as well as in Kiev, Dnepropetrovsk, Zhytomyr and Odessa. In Moscow, the helicopter was presented to the general public on May 16 as part of the HeliRussia 2013 International Helicopter Industry Exhibition.


More than 2 weeks, 20 specialists, among whom were technicians, pilots, experts in the field aviation and just lovers of helicopter technology, could test the EC130 T2 in flight every day. At the same time, the car received mostly positive reviews, and helicopter passengers were delighted with its level of comfort and flight performance.

During the demonstration flights, Eurocopter test pilot Olivier Jance performed aerobatics in the air. According to the pilot, it is during the execution of quite complex maneuvers that the reliability, safety and comfort of the model can be assessed, as well as the power reserve available to the helicopter. The Eurocopter Vostok CEO Laurence Rigolini noted that customers literally fall in love with the Eurocopter EC130 T2 helicopter. The company is confident in its success in Russia and the CIS countries. This model appeared in the domestic market at the beginning of 2012, since then the company has already received more than 70 confirmed orders for this helicopter. 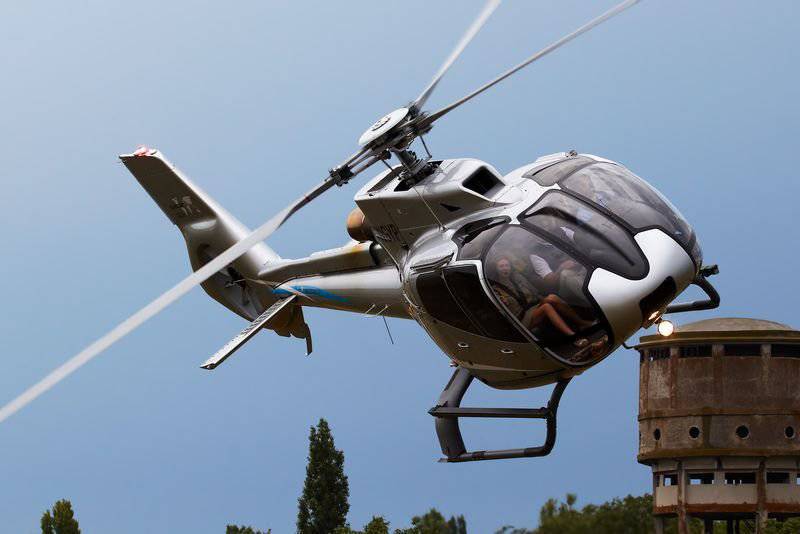 Products of a European manufacturer today are represented in the park of almost all major commercial operators in the country. It was the Eurocopter helicopters that became the first helicopters manufactured in Western countries, which were delivered to the regions for work in energy companies, police, emergency medical care, as well as in other state institutions. Good flight-technical parameters of these helicopters meet the requirements of Russian customers, which allows the Eurocopter Vostok company to occupy a leading position in the market of Russia and the CIS countries. Laurence Rigolini notes that the success of the company is also confirmed by the growth of orders, so in 2012, the number of orders increased by 35% compared to 2011 in the year, and the number of shipments increased by 25%.

The EC130 T2 helicopter first flew in the 2011 year. According to the manufacturer, this helicopter was based on the EC130 model, but more than 70% of the helicopter structure was upgraded. As a result, it was possible to raise the operational characteristics and level of comfort of the car in comparison with all the predecessors represented in the family of lightweight single-engine helicopters of the company. 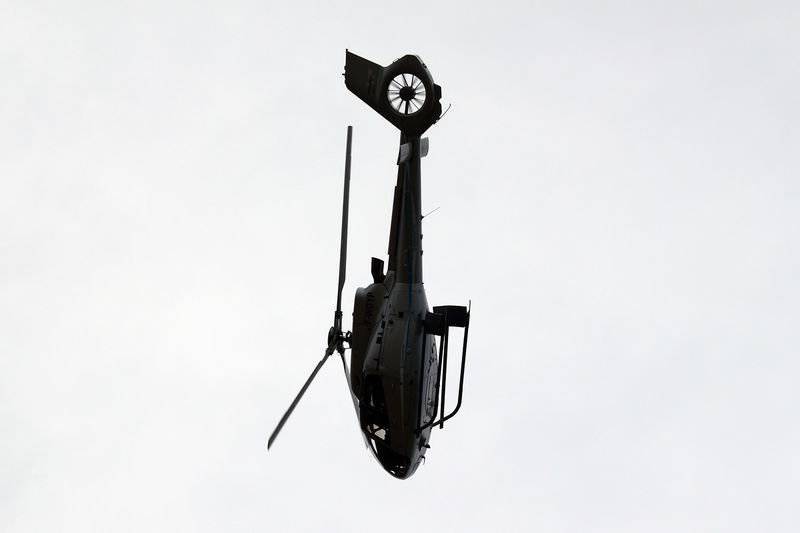 Eurocopter EC130 T2 is a light single-engine multifunctional helicopter that is capable of solving a wide range of tasks, including commercial and VIP transportation, aerial work, air tourism, the provision of emergency medical care (provided with equipment by a special medical module), law enforcement, monitoring , video and photography and much more.

First of all, the modernization of the helicopter touched its engine. On the EC130 T2 helicopter, the more powerful Arriel 2D turboshaft engine, which is manufactured by Turbomeca, is installed, and the helicopter received a new modified main gearbox. The power of this engine is 950 HP Thanks to the installation of a new, more powerful engine, the take-off weight of the helicopter increased to 2500 kg, and with a load on the external sling - 3040 kg. The speed of the helicopter increased by 10 nodes (18 km / h). In addition, the vibration control system was significantly improved, the ventilation system, air distribution and anti-fogging system underwent a complete update. Significant changes have occurred in the car.

The interior layout of the Eurocopter EC130 T2 helicopter was redesigned, the cockpit floor became completely level (previously it was planned to perform an elevation under the rear seats in the cockpit). The pilots were provided with a refreshed avionics complex, the cockpit ergonomics were significantly improved. In the passenger cabin, new energy-absorbing seats were installed, with a good balance of passengers in flight. In addition, it has become much easier to carry out maintenance of the air conditioning system and electrical equipment of the helicopter. 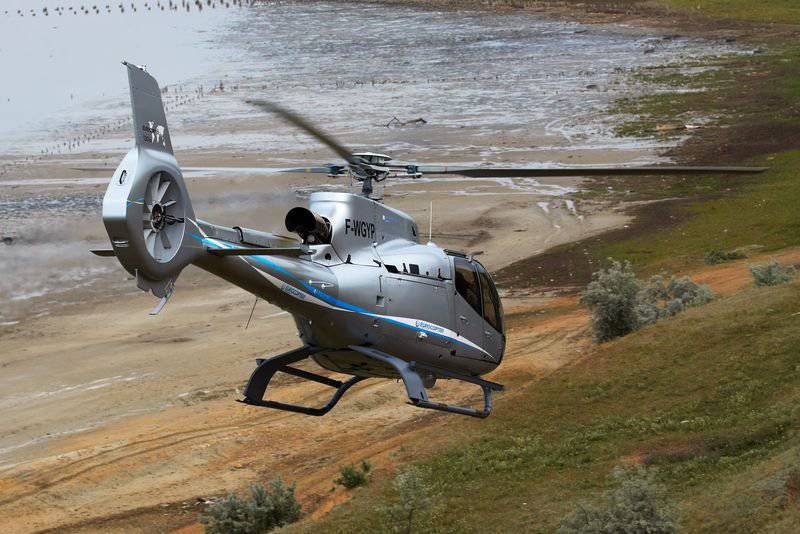 The EC130 T2 helicopter is distinguished by the widest passenger cabin among the helicopters of its class. In the executive version, it can accommodate 6 passengers and 1 pilots. The internal ergonomics of the passenger compartment is well thought out, the helicopter cabin has excellent visibility. The use of modern materials and technologies allowed to create a safe, reliable and comfortable helicopter for business people. High passenger safety is the responsibility of the new digital engine control system (FADEC), as well as a separate backup control unit that automatically controls the engine in the event of a complete failure of the 2-x digital FADEC channels.

Helicopter EC130 T2 is recognized as one of the quietest cars in its class, largely due to the introduction of an active anti-vibration system. Composite materials are widely used in the construction of this helicopter, which made it possible to significantly lighten the weight of the vehicle, as well as reliably protect the fuselage of the helicopter from corrosion, and therefore reduce operating costs. On the EC130 T2, a tailpiece screw of the Fenestron type is mounted, which is a unique development of a European company. The tail screw is placed in a special annular tunnel, which protects the screw from the ingress of foreign objects and leads to a decrease in noise and vibration. The noise level of the Eurocopter EC130 T2 helicopter is within the framework of strict air travel rules over the territory of the US Grand Canyon National Park, which is important for tour operators.

Among the additional options of the new helicopter, you can highlight the new generation of powerful air conditioning, two sliding passenger doors on both sides of the cab, tinted panoramic windshield and energy-absorbing design of seats. At the same time, a unique air-conditioning system appeared on board, which has climate control and separate work areas, the temperature is quite effectively regulated, and the air is actively distributed. The settings of this system are intuitively clear to many people due to the similarity of work with modern automotive air conditioners. 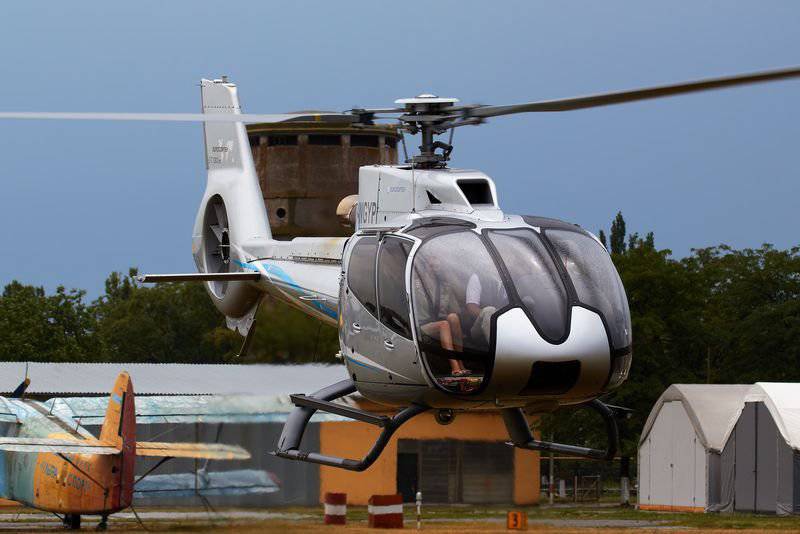 The new EC130 T2 helicopter is designed to operate in all weather and climatic conditions, and thanks to a set of changes in design, operational and flight performance, as well as a very high level of comfort, it remains the only machine in its class designed to solve any problems. The main advantages of the helicopter - reliability, efficiency, spaciousness and excellent visibility.

Ctrl Enter
Noticed oshЫbku Highlight text and press. Ctrl + Enter
We are
An-12 in AfghanistanAccording to the results of HeliRussia-2012
Military Reviewin Yandex News
Military Reviewin Google News
21 comment
Information
Dear reader, to leave comments on the publication, you must sign in.