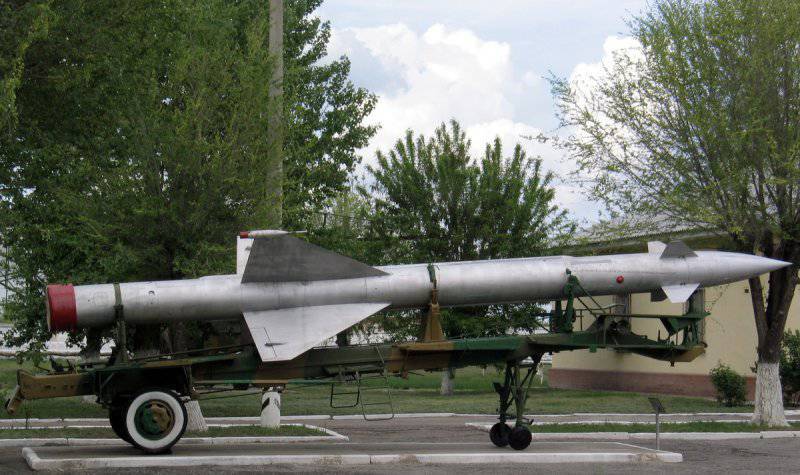 Post-war transition to aviation The use of jet engines has led to qualitative changes in the confrontation of air attack and air defense systems. The sharp increase in speed and maximum flight altitude of reconnaissance aircraft and bombers reduced the effectiveness of anti-aircraft artillery to almost zero. At the end of the 40s of the XX century, the Soviet Union needed a comprehensive defense of Moscow from possible massive air attacks. So, the country began implementing one of the most complex and expensive projects at that time to create an air defense missile system controlled by a radar network. The decision to create this system was made in August 1950.

The organization of work on the Berkut system was entrusted to the Third Main Directorate (TSU) under the USSR Council of Ministers. She was supervised by L.P. Beria.
The task of developing the system was assigned to Moscow's KB-1, headed by Deputy Minister of Weapons K. M. Gerasimov and chief designers S. L. Beria (son of L. P. Beria) and P. N. Kuksenko. Deputy Chief Designer was A. Raspletin. At the same time, OKB-301, headed by S. Lavochkin, was entrusted with the development of B-300 single-stage missiles, and already in June 1951, test launches of B-300 missiles were conducted.

The radar station of the sector review 10-centimeter range has been assigned the index B-200. The complex of structures with radar B-200 in the design documentation received the name CRH (central guidance radar), in the troop documentation - RTC (radio engineering center). Each station, having twenty firing channels, was to provide simultaneous observation of twenty targets and direct up to twenty missiles at them. 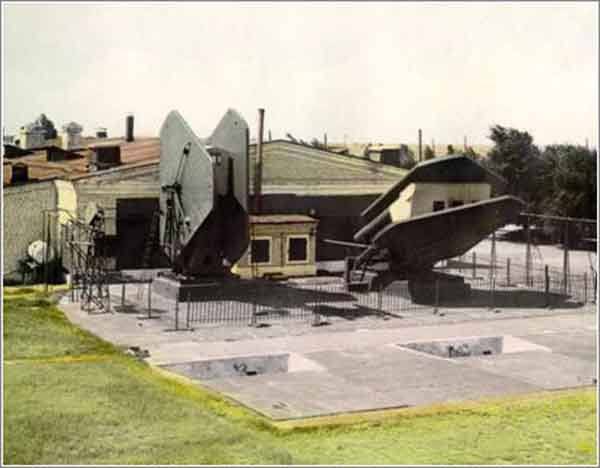 20 September 1952 of the prototype B-200 was sent to the Kapustin Yar firing range for firing tests with B-300 missiles. 25 May 1953goda a Tu-4 target aircraft was shot down by a guided missile for the first time.

In the 1953 year, at the insistence of a group of military men who indicated the excessive complexity of operating the system and its low efficiency, comparative tests of anti-aircraft artillery and the Berkut system were conducted. Only after these comparative firing of the gunners did the last doubts about the effectiveness of the anti-aircraft guided missile weapons. 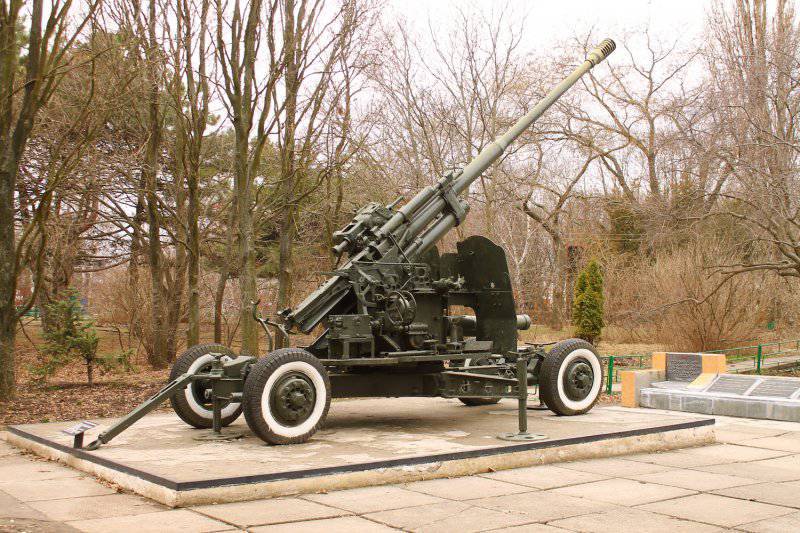 In accordance with Stalin's instructions, Moscow’s air defense system should have been able to repel a massive raid by enemy aircraft with participation of up to 1200 aircraft. Calculations showed that this would require 56 multichannel anti-aircraft missile systems with radar sector surveys and launchers of missiles located on two rings. On the inner ring, at a distance of 45-50 kilometers from the center of Moscow, it was planned to place the 22 complex, on the outer ring, at a distance of 85-90 kilometers, the 34 complex. The complexes should be located at a distance of 12-15 kilometers from each other, so that the sector of fire of each of them overlaps the sectors of the complexes to the left and right, creating a solid field of destruction. 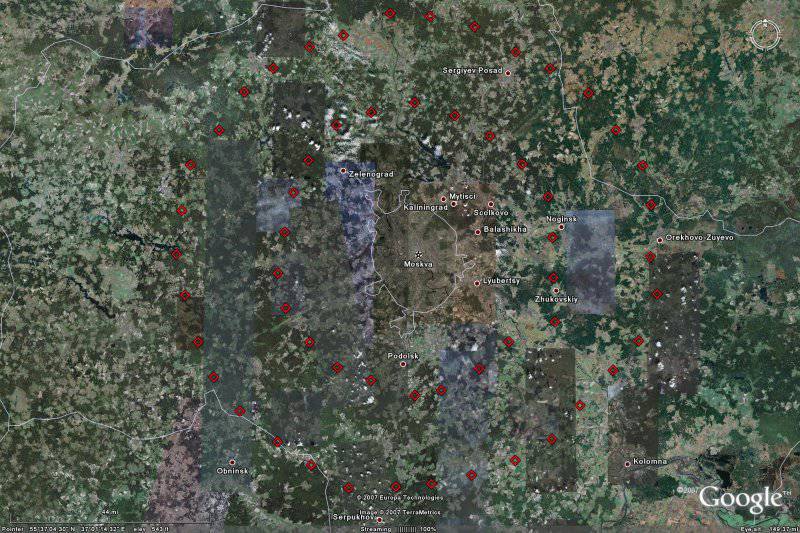 Positions of the C-25 air defense system around Moscow

Later, the areas of responsibility of all C-25 regiments were divided into four equal sectors, each of which contained 14 anti-aircraft missile regiments of the near and far echelons. Each 14 regiment formed the body.
Four corps made up a special purpose 1 Army. 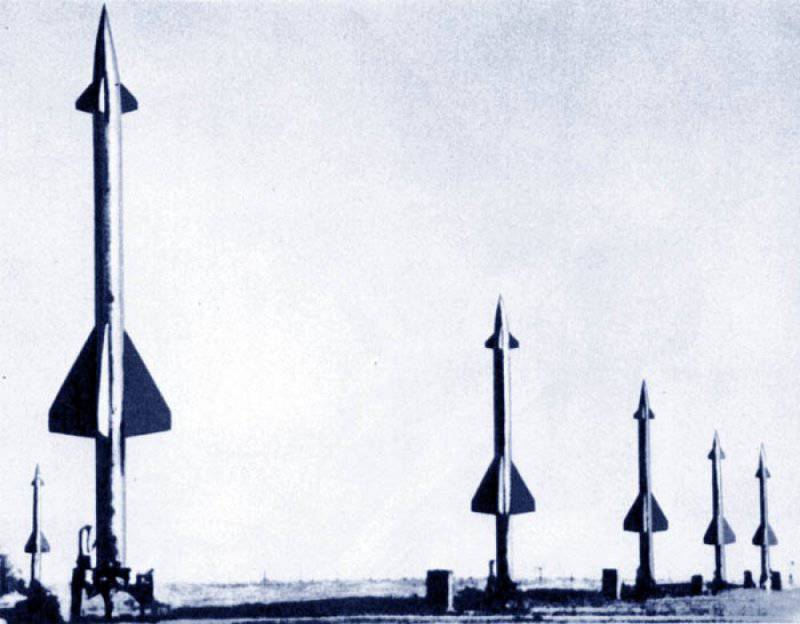 Serial missile samples were tested in the 1954 year, and simultaneous interception of 20 targets was made.
7 May 1955, the C-25 system was adopted by a decree of the Central Committee of the CPSU and the USSR Council of Ministers. Becoming, therefore, the first adopted in service in the USSR and the first operational-strategic air defense system in the world, the first multi-channel air defense system with vertically launching missiles.
Thanks largely to the construction of the capital concrete structures of the C-25 complexes, the Moscow ring road appeared.

The B-300 rocket used in the С-25 SAM, one-stage, with LRE, vertical launch. Made under the "duck" scheme, the rudders were placed in the forward part of the hull in two mutually perpendicular planes, in front of two wings. The launch weight of the rocket was about 3500 kg. LPRE - 9000kg. The warhead of high-explosive fragmentation type was undermined automatically by the command of the RV and hit the enemy's aircraft from a distance to 75 m. The rocket was escorted by a signal from the onboard radio response. The command method of missile targeting was used.

The starting (starting) table - a metal frame with a conical flame diffuser and a device for leveling, was mounted on a concrete base. The rocket was mounted on the launch pad in a vertical position with the help of four clamps located on the bottom cut around the rocket engine nozzle. The power supply on board the rocket during inspections and pre-launch preparation was supplied by cable through a quick-release onboard connector. Prior to the start of the 60, the B-300 rocket was repeatedly upgraded. The changes mainly concerned the engine with the fuel supply system and the warhead. A large amount of work was done at OKB-301 to ensure the long-term storage of rockets in the refilled state, including means of protection against aggressive components of the fuel, so that the missiles could remain on duty for a long time. During the long-term operation of the C-25 system and its modifications, 205, 207, 217, 219 rockets of various variants were developed and used, developed by the OKB-301 and Burevestn ICD. 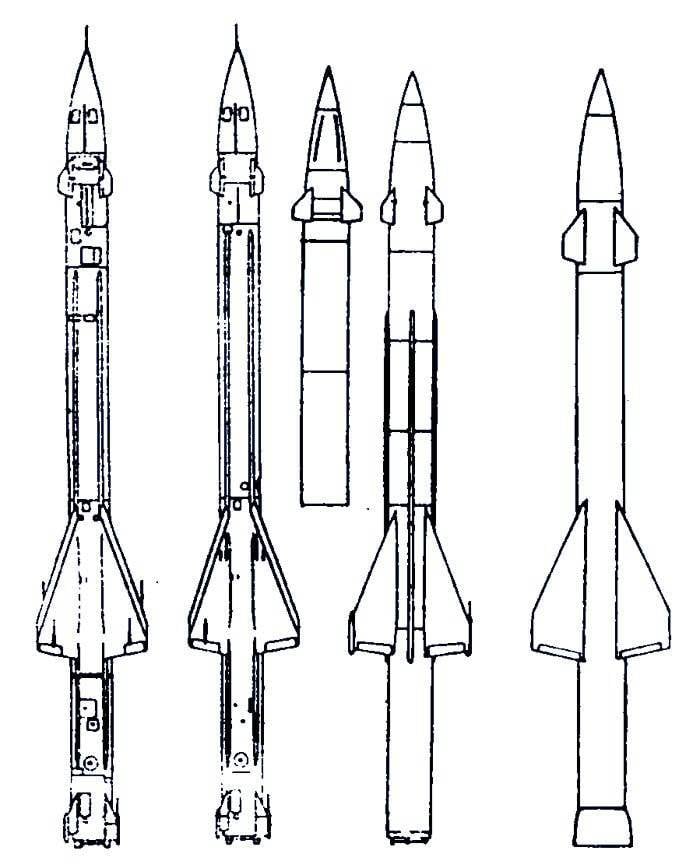 In the middle of 60-x, the Moscow air defense system C-25 was upgraded and received the designation C-25M. Missile targeting equipment and calculating devices of a modified version of the B-200 station were performed purely electronic without the use of electromechanical elements.
For the upgraded C-25M, 217M missiles were developed.
In connection with the growth of the LRE (up to 16-20 tons), it was necessary to strengthen the launching tables and ground start-up devices. 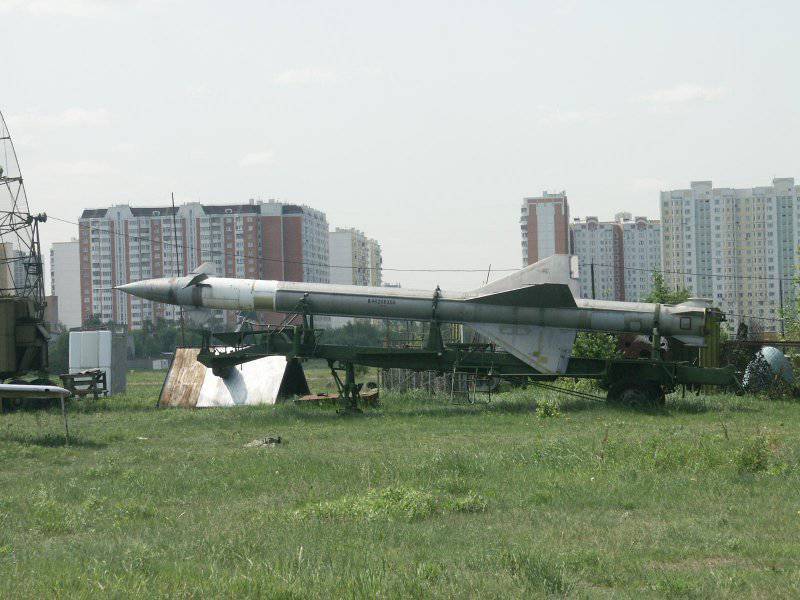 The layout of the 217M SAM was very different from its predecessors. The hull became somewhat longer, the aerodynamic “duck” scheme was reborn into a “triplane”: an additional cruciform tail appeared in the tail section, the wings and front steering wheels were modified.

At the end of the 50s, the possibility of using special (nuclear) combat units as an alternative to conventional warheads was considered.
It should be noted that in those years, almost all classes of guided and unguided rockets, from ballistic missiles to air-to-air missiles, attempted to implement the same. Not without such experiments with the B-300 family of missiles. As possible targets, group targets and high-altitude aircraft flying on the “ceilings” of more than 23 km were considered. The rocket was in service.
At the turn of the 50-x and 60-s at the Kapustin Yar proving ground, real tests of the C-25 air defense system with a ZUR equipped with a nuclear warhead were conducted. During the launch, two radio-controlled targets flying at a distance of 2 km were destroyed. from each other at an altitude of about 10 km.


The C-25 system stood on the defenses of Moscow for more than 30 years, and, fortunately, did not participate in the hostilities.