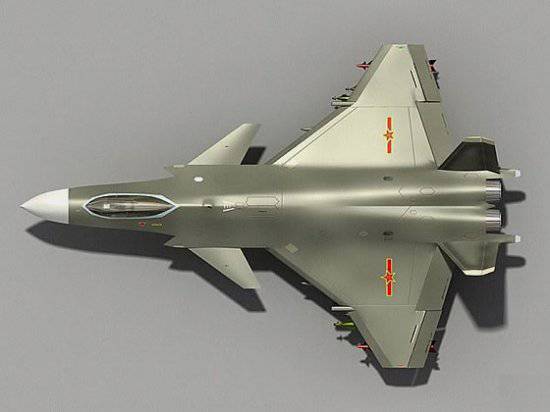 Several Chinese defense forums posted images of the new fighter. The photographs show the combat aircraft, the structural elements of which resemble both the fifth-generation American fighter F-22 and the Russian T-50 PAK FA.

The fighter was designed using stealth technology and equipped with front horizontal tail.

Currently, defense analysts disagree on whether the photos are fake, made in a graphical editor, or whether this is a fifth-generation fighter really created under strict secrecy, known by several designations - J-20, J-14 or J-XX.

Causes a question and a source of receiving photos. It is possible that their appearance is a targeted “information leakage” initiated by the Chinese special services, since harsh punishment is provided for disclosing secret information in the PRC.

According to Aviation Week, even if the images are genuine, the creation of a prototype and even the start of taxi tests should not be a matter of great concern. Based on the evaluation of the implementation of similar programs in the US and Russia, China will need considerable time to finalize the prototype to the production version. So, the American F-22 made the first flight in the 1990 year, and was adopted for use later 15 years.

It is necessary to take into account the fact that the creation of engines for combat aircraft imported from abroad remains a serious problem for the Chinese aviation industry. Own engines, which can be used to equip a fifth generation fighter prototype, are currently unavailable at Beijing.

At the same time, China is making active efforts to eliminate the backlog in the field of aircraft engine building. Overcoming serious technical problems, Shenyang Engin Group started mass production of the WS-10A engine with 12-13 tons. At the same time, Chengdu Engin Groups was developing the WS-15 engine with more than 15 tons. At the end of the year, 2009 reported that China is selling the 18 t engine design program, which can be comparable to the Pratt & Whitney F135 power plant, which is equipped with F-35. In August, 2009 of the Year, “Janes”, citing Ukrainian sources, reported that Motor Sich plans to work with China on a program to create an engine with an 15 ton.