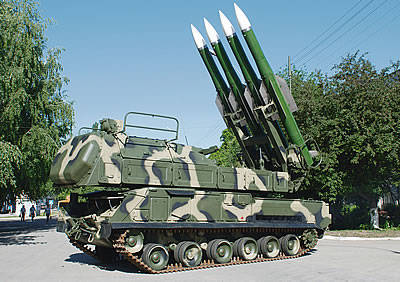 In the shooting at Kapustin Yar in September, the Buk-M2E anti-aircraft missile system (ZRK) demonstrated 100-percent performance. He was hit by five targets with five shots. This was announced by the press secretary of the commander of the North Caucasian Military District Lieutenant Colonel Andrei Bobrun. The shooting was conducted by an anti-aircraft missile brigade, the first to be armed with the Buk-MXNUME air defense system in the Russian army.

The complex strikes any aerodynamic targets, including tactical and strategic maneuvering aircraft aviation, fire support helicopters, including hovering ones, an extensive range of missile targets: tactical ballistic, anti-radar, winged. SAM can also attack surface targets (class destroyer and missile boat). It provides firing of ground-based radio contrast targets both in an interference-free environment and in conditions of intense radio interference.

The complex used modern phased antenna arrays with an effective command method of phase control, allowing you to simultaneously track and hit up to 24 targets with a minimum time interval. The presence in the ZRK of the radar of illumination and guidance of the RPN 9C36E with the antenna post rising to the height 21 and m ensures the defeat of targets flying at low and extremely low altitudes, in conditions of wooded and rough terrain. Placing combat vehicles on high-speed self-propelled tracked chassis makes it possible to deploy and roll out SAMs in no more than 5 minutes. It takes only 20 seconds to switch positions with equipment turned on. All this testifies to the high mobility of the complex.

Modern hardware and software implementation of noise protection channels ensures the reliable functioning of the combat equipment of the complex under conditions of intense noise barrage noise up to 1000 W / MHz.

The possibility of day-to-day operation of the main combat equipment of the complex - SOU 9А317Е in the mode of an optical-electronic system, implemented on the basis of sub-matrix thermal imaging and CCD-matrix television channels, significantly increases the noise immunity and survivability of the air defense system.

The high efficiency of the complex has been repeatedly confirmed by multiple successful shooting tests at ranges of the Russian Federation and foreign customers in conditions as close as possible to the combat ones. The Buk-М2Е anti-aircraft missile system is one of the best medium-range air defense systems in the world. It enjoys ever-increasing demand in the global arms market. 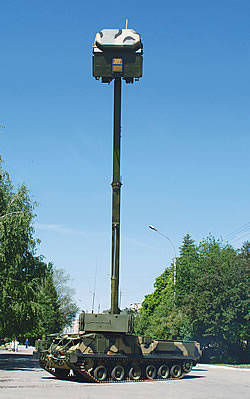 Another product manufactured by UMP, the Tunguska anti-aircraft self-propelled gun (ZSU), also gets a second wind. It was developed in the 80s. XX century. The lead developer is the State Unitary Enterprise “Instrument Engineering Design Bureau (KBP). ZSU is designed for air defense of motorized rifle and tank units of troops in all types of their combat operations. ZSU provides detection, identification of nationality, tracking and destruction of air targets: tactical aircraft, helicopters, including hovering, cruise missiles, remotely piloted aircraft when working from a place, in motion and from short stops, as well as the destruction of ground and surface targets and targets dropped by parachutes. For the first time, the ZSU has achieved a combination of two types of weapons (rocket and cannon) with a single radar and instrument complex.

Many years of experience in operating the ZSU “Tunguska”, ZSU “Tunguska-M” and its further modifications showed that they have insufficient noise immunity when firing missile weapons at targets using optical interference. In addition, they are not equipped with automated equipment for receiving and implementing target designation from a higher command post, which reduces the effectiveness of the combat use of the ZSU battery with a massive enemy raid.

To eliminate these shortcomings, the Tunguska-M ZSU was modernized. As a result, in the 2003, an anti-aircraft self-propelled unit “Tunguska-M1” (ZSU 2C6М1) appeared with significantly improved combat performance.

The use of a new missile with a pulsed optical transponder and the modernization of its control equipment made it possible to significantly increase the noise immunity and increase the probability of hitting targets operating under the cover of optical interference. Equipping the missile with a radar non-contact fuse with a range of operation up to 5 m significantly increased the effectiveness of the ZSU in the fight against small-sized targets. Now the target destruction range has increased from 8000 to 10000. And the introduction of automated reception and processing equipment for external target designation from the command post of the PRNU type (9С80) has significantly increased the effectiveness of the combat use of ZSU with massive raids. The modernization of the digital computer system ZSU on the basis of the new calculator has expanded the functionality of the central computer system in solving combat and control tasks, has increased the accuracy of solving problems.

The gunner’s “unloading” system provides automatic, high-speed, two-coordinate tracking of the target with an optical sight. This greatly simplifies the process of target tracking by the gunner, while at the same time increasing the tracking accuracy. This reduces the dependence of the effectiveness of the combat use of the optical channel on the level of professional training of the gunner.

The upgraded radar system ensures the reception and implementation of external target designation data, the operation of the gunner’s “unloading” system. Improved reliability of equipment, improved technical and operational characteristics.

The use of a more powerful gas-turbine engine with a doubled resource increased the power of the ZSU power system and reduced the power drawdown when working with the included weapon targeting hydraulic drives.

Currently, work is underway to increase the altitude of the ZSU radar to 6 km (instead of 3,5 km) and to introduce television and thermal channels with automatic tracking, which will ensure the presence of a passive target tracking channel and the daily use of rocket weapons.

ZSU "Tunguska-M1" firing from the spot and in motion. According to the effectiveness of the protection of the military units covered by it on the march and stationary objects from air attack weapons flying at low altitudes, it has no analogues in the world. 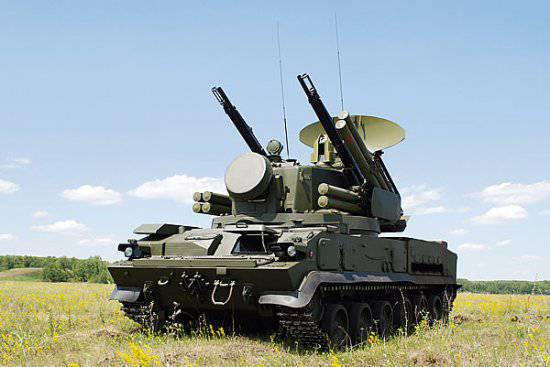