1 2013 June
45
The “trawl” was named the mine-stretch mine clearance system developed in the student's design bureau at the “Shooting-cannon armament” department of Tula State University. Its main advantage is that with this effective, simple and cheap device you can quickly equip any joint stock company, thus equipping each soldier with a “trawl”. 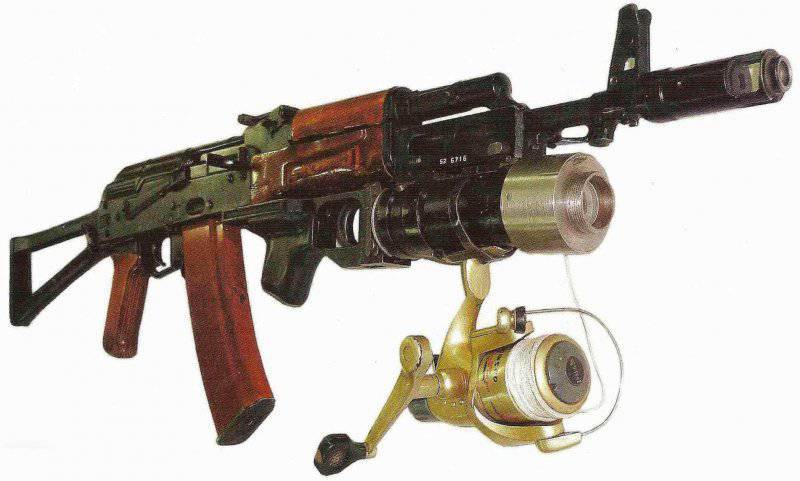 Currently, the Russian army uses kits for manual demining of the KR-I, KR-O, KR-95, KR-97 Blesna. However, they are quite complex, require special training, and there is not every motorized rifle unit. In addition, they have a number of specific drawbacks, which can be shown by the example of a four-legged cat for trawling from the CR-I kit. It is characterized, in particular, by the low reliability of trawling stretch marks and mines with tension sensors of the target, and especially mines like POM-2. When trawling under conditions of bushes and light forest, there are quite frequent cases of complete or partial cat getting stuck, which leads to its loss or to the formation of untested areas due to the cat "jumping". In addition, the range of her hand throwing does not exceed 14-18 m.

In the framework of the “Regional Research Laboratory of Schoolchildren and Students” at Tula State University, in the student design bureau (SLE) at the department of “Shooting and Cannon Armament” (SST) they decided to create a simple, cheap, effective and accessible device for each soldier. stretch marks.

After the initial study, it was decided to focus on two versions of the device, which was called the “Tral”. Both designs are designed to remove stretch marks at distances up to 100 m using standard AK.

The principle of mine clearance consists in throwing a certain range of a demining device and further attracting it (trawling) to yourself. In the process of pulling up the demining device, gliding along the ground, will tear all the stretch marks in its path, causing the detonation of all the installed mines. The result is a completely safe passage through mined areas.

The difference between the two devices is that one uses the grenade launcher GP-25 or GP-30 for throwing the demining element, and the second - the energy of the standard automatic bullet. In both versions, a zero-inertia reel is used for the pull-up.

In the first version, the trawl missile element can be either a regular profiled metal bar or a rather complex structure with a weight up to 350 g. VOG-25P. An inertialess coil is mounted on the barrel itself (with a large distance it is possible to install a motorized coil). On it is wound a thin metal cable with a diameter of 30 mm that withstands tension up to 25 kg. The device works something like this. The fighter points the barrel toward the intended trawling at the required angle (the angle depends on the desired throwing distance) and pulls the trigger of the grenade launcher. There is a shot, a grenade passes through the barrel and picks up a pig with a muzzle cut. Since at the moment of contact the VOG-0,1P has a small initial speed, and the structure of the pig follows the contour of the head part of the shot, then there is a smooth touch with the demining device. VOG-78P delivers the disc to the working distance. After she landed, the fighter using the inertia-free coil pulls the missile to itself. He, gliding on the ground, when meeting with a banner, tears it off at the expense of its mass and cable tension.

Kalashnikov assault rifle with the installation "Tral", which uses a regular sub-barrel rocket launcher to throw a demining element 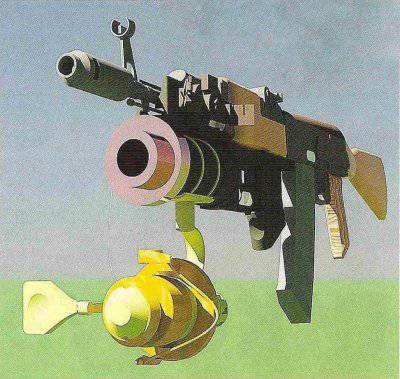 General view of the AK equipped with the device "Tral"

VOG-25P and throwing device in flight 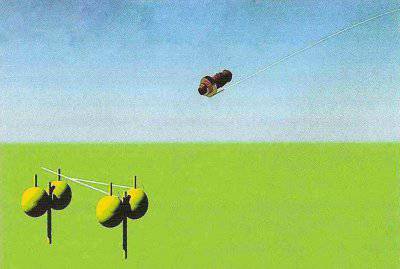 Approach of a pig with VOG-25P to a mine trap

The calculations showed that a regular shot of the VOG-25P has enough energy to cast a very large trawller in terms of weight and dimensions. Therefore, it is quite possible to mount a removable unit with an electromagnetic wave generator inside the throwing element to undermine the masked mines. In this case, the system "Tral" will be a universal means of mine clearance.

Today in SLE continues to improve the device "Tral". In particular, an option for the elimination of anti-personnel mines is being developed. In the cast element, which is a removable cylinder, there is a network for the propagation of electromagnetic waves. To open the grid when hitting the ground, hollow cylinders are used (resembling a foldable antenna from a radio receiver) containing a spring. The opening of the membrane occurs under pressure from the antenna.

In the second version of the “Tral” device, the throwing of the cat onto the place of the intended placement of the stretch marks is supposed to be carried out with the help of a shot from the combat patron of AK-74. To do this, the cat, with the help of a special modular device, is placed directly in front of the barrel. After the bullet leaves the bore, it enters the cat's internal cavity, picks it up and pulls it forward. To increase the distance of the throwing of a sapper cat, the cord is placed directly on the outer surface of the cat, with the possibility of successive descent of cord sections when it is thrown.

Due to this placement of the cord in the process of movement, the inhibiting inertial effect on the cat from the side of the initially resting sections of the cord that are sequentially drawn into motion is eliminated.

Both modifications of the device "Tral" allow the removal of stretch marks at a distance exceeding the cat's range of throwing manually, which allows you to save the lives of fighters, and is a reliable, reusable, and most importantly - inexpensive device.

AK with the system "Tral" of two types: with a reflux of a demining element using a grenade launcher and using a standard assault rifle cartridge 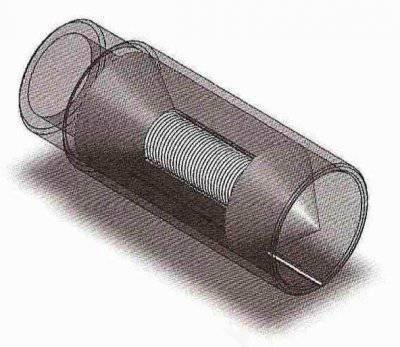 The appearance of the trawl 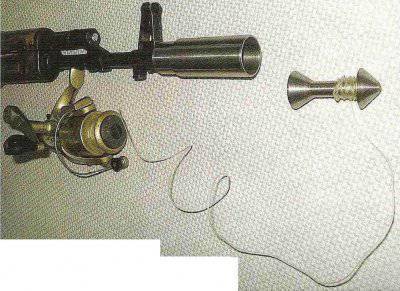 An example of undermining stretching, using the trawl