28 May 2013
9
In previous articles, three Bulgarian-made pistols were considered. This article proposes to complete the series, talking about another version of the short-barreled weapons a native of Bulgaria, especially since he has a direct relationship to the Bulgarian version of High Power, as it is, in fact, its further development, well, or a copy of one of the options. In general, we can consider this weapon in different ways, but I propose to look at this model of the pistol as the result of the development of the weapon case in Bulgaria. This is an Arcus pistol with the designation 98DA and its various variants. 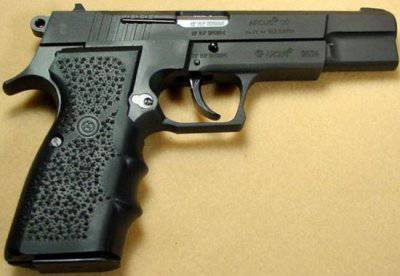 As is clear from the name of the weapon, this is the further development of the Arcus 94, to which a double-action firing mechanism was added, which was good for the weapon. Also, the automatic firing pin safety device was added, which does not allow the weapon to shoot if the trigger is not pressed. If we take external changes, the upper part of the housing-bolt has become more rounded, and the so-called “beaver tail” has appeared on the back side of the frame. The base model was fed from a magazine with a capacity of 15 cartridges, had a weight of 950 grams, a length of 203 millimeters with a barrel length of 118,5 millimeters.

In addition to this sample, a compact version was created a bit later, although the reduction in dimensions was insignificant. This gun received another letter in the title, namely "C". The total length of the weapon has decreased to 186 millimeters, barrel length to 101,5 millimeters. The height of the weapon was also less, because the store began to hold 13 cartridges. The weight of the weapon decreased by just 50 grams. For the civilian market, both models of weapons are available with magazines with a capacity of 10 cartridges. 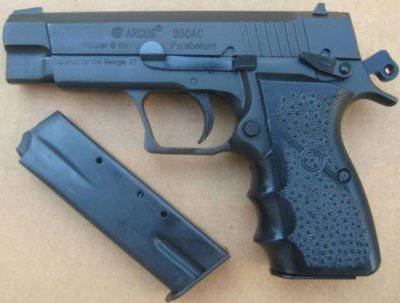 The layout of the controls and their shape completely repeat the previous pattern, as well as the 94 model, the Arcus 98 can be equipped with a two-way fuse switch, but in its basic version it has only a switch on the left side of the weapon. Considering that the weapon was supplied not only to the army and police of Bulgaria, where, by the way, it is in service, but also for the civilian market, the execution of the pistol can be very diverse, we should pay attention to the fact that the company went towards the potential buyer and could Order weapons with a stainless steel frame or a chrome-shiny toy in advance; artistic decoration was also available. In general, "every whim for your money."

Automation weapons naturally remained the same - the automation system with a short barrel and locking the barrel bore due to the protrusions on the barrel, entering the grooves on the inner surface of the housing-bolt. 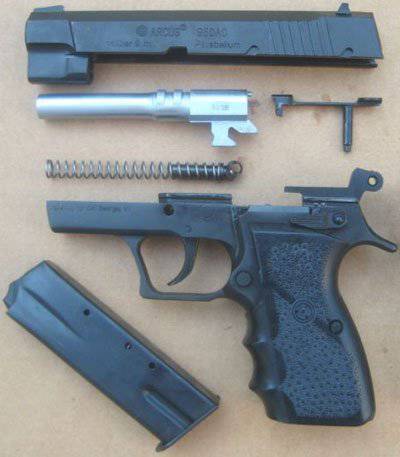 In its normal position, the barrel and the casing of the bolt are engaged with each other, but as soon as a shot occurs, the powder gases not only pushed the bullet along the barrel, but also forced the barrel and bolt to move back, as they also pressed on the sleeve that was supported by the bolt. As a result, the barrel and bolt moved together backwards, since the barrel had a tide under the chamber, which had a figure cut, through which the axis of the slide gate lever passed, the breech block was lowered. Accordingly, the protrusions above the outer side of the barrel came out of the coupling with the casing-bolt. As a result, the barrel stopped, and the shutter casing moved back, removing the cartridge case and cocking the trigger. On the way back of the casing-bolt, a new cartridge was sent, the bolt rested against the chamber and pushed the barrel. Conversely, due to the interaction of the axis of the bolt lag lever and the figure cutout in the tide under the chamber, the breech breech rose and the protrusions on the barrel entered into engagement with the gate casing. In general, inside the weapon nothing has changed except USM.

In general, the weapon has established itself as a reliable and unpretentious sample, easy to maintain and accurate enough for a short-barreled sample. As proof of this, one can mention the fact that the gun is in service with the army and the police of Bulgaria, and also enjoys a fairly large popularity in the civilian arms market. It remains only to wait for the further development of this weapon, although it seems that there is nothing better to improve, except to make the barrel adhesion to the casing - a lock for the window for ejection of spent cartridges in order to simplify production, but the gain will be insignificant. 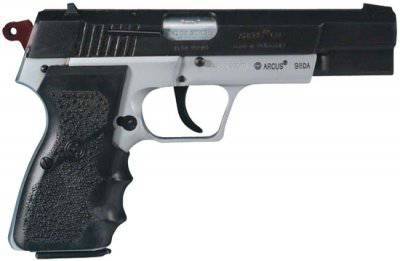