American project of a supersonic bomber with nuclear engines

24 May 2013
16
Nuclear euphoria of the fifties of the last century gave rise to a lot of bold ideas. It was proposed to use the energy of fission of the atomic nucleus in all areas of science and technology, or even in everyday life. Aircraft designers also did not leave her unattended. The great efficiency of nuclear reactors in theory made it possible to achieve incredible flight characteristics: new aircraft with atomic engines could fly at high speeds and overcome up to several hundred thousand miles at a single gas station. However, all these advantages of nuclear energy were more than compensated by minuses. Reactor, including aviation, it was necessary to equip a whole range of protective equipment so that it did not pose a danger to the crew and maintenance personnel. In addition, the question of the optimal system of a nuclear jet engine remained open. 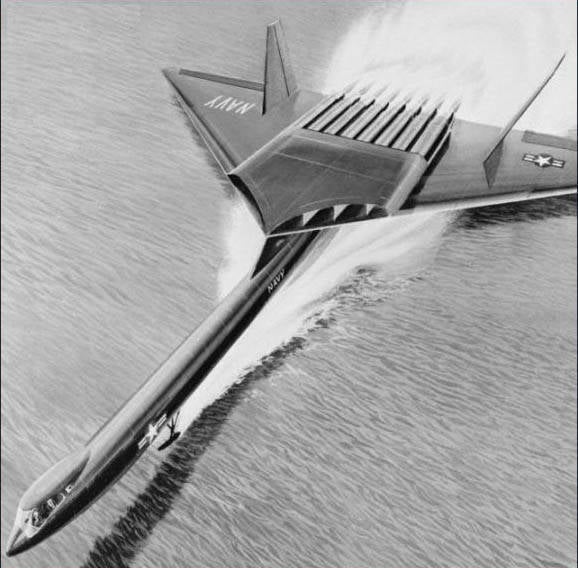 Around the mid-fifties, American nuclear scientists and aircraft designers decided on the range of problems that need to be solved for the successful construction of a serviceable aircraft with a nuclear power plant. The main problem that prevented the creation of a full-fledged atomic-powered aircraft was the radiation hazard. Acceptable reactor protection was too big and heavy to allow aircraft of that time to lift it. The dimensions of the reactor led to a host of other problems, both technical and operational.

Among others, over the problem of the appearance of a practically applicable atomol worked for the firm Northrop Aircraft. Already in the 1956-57 years there they developed their views on such a technique and identified the main features of such an aircraft. Apparently, the Northrop company understood that the aircraft, with all its advantages, remains too difficult to manufacture and operate, and therefore it is not necessary to hide the main ideas of its appearance under the vultures of secrecy. So, in April, 1957, the magazine Popular Mechanics published an interview with several scientists and Northrop employees who were involved in determining the appearance of the atomizer. In addition, this topic was subsequently repeatedly raised by other publications.

A group of engineers at Northrop, which was headed by nuclear technology specialist Lee A. Olinger, worked on developing the look of a promising aircraft, solved technical problems as they arrived and applied the simplest and most obvious solutions. So, the main problem of all the aircraft - the unacceptably large size and weight of the power plant with a nuclear reactor - was tried to be solved by simply increasing the size of the aircraft. Firstly, it would help to optimally manage the internal volumes of the aircraft, and secondly, in this case it was possible to spread the cockpit and the reactor as much as possible.

With an aircraft length of at least 60-70 meters, two main layouts could be applied. The first implied the standard placement of the cockpit in the nose of the fuselage and the reactor located in its tail section. The second idea was to install a reactor in the nose of the aircraft. The cabin in this case was to be located on the keel. This design was much more complicated and therefore it was considered solely as an alternative.

The purpose of the work of the group Olinger was not just to determine the appearance of a promising atomizer, but to create a preliminary project of a certain supersonic strategic bomber. In addition, it was planned to assess the possibility of developing and building a passenger or transport aircraft with high flight data. All this was taken into account when developing the shape of the base bomber and significantly influenced its design.

Thus, the requirements for speed led to the fact that the projected hypothetical aircraft received a triangular wing, located in the rear of the fuselage. The tailless scheme was considered the most promising in terms of layout. It allowed the reactor to be moved as far as possible from the cabin located in the nose of the aircraft, and thereby improve the working conditions of the crew. Nuclear turbojets were supposed to be placed in a single package over the wing. On the upper surface of the wing provided two keels. In one version of the project, in order to improve flight performance, the wing was connected to the fuselage using a long and powerful pylon.

The greatest questions were caused by the nuclear power plant. The experimental designs of reactors available in the mid-fifties, the size of which theoretically made it possible to install them on airplanes, did not meet the weight requirements. An acceptable level of protection could be provided only by a multi-layer construction made from metals, concrete and plastic weighing about 200 tons. Naturally, this was too much even for a large and heavy aircraft with an estimated weight of not more than 220-230 tons. Therefore, aircraft designers had to hope for the early emergence of less heavy protective equipment with sufficient characteristics.

Another controversial point was the engines. Most of the "concept-art" of a promising atomizer depicts aircraft with eight jet engines. For objective reasons, namely, due to the lack of ready-made nuclear turbojet engines, Northrop engineers considered two options for the power plant, with open and closed-cycle motors. They differed from each other in that in an engine of the first type, with an open cycle, the atmospheric air after the compressor had to go straight to the reactor core, where it was heated, and then redirected to the turbine. In a closed-cycle engine, the air should not have left the channel and heated from the heat exchanger in the flow with the coolant circulating in it from the reactor circuit.

Both schemes were very complex and at the same time posed a danger to the environment. An open-cycle engine in which the outside air was in contact with the core elements would leave behind a radioactive trace. The closed cycle was less dangerous, but the transfer of sufficient energy from the reactor to the heat exchanger was quite a challenge. It must be remembered that the American designers began to work on the creation of nuclear jet engines for aircraft in the late forties. However, for more than ten years they have not been able to build a workable engine suitable for installation on at least an experimental aircraft. For this reason, the Olinger team had to operate only with certain hypothetical figures and the promised parameters of the engines being created.

Based on the characteristics declared by the developers of the engine, the engineers at Northrop determined the approximate flight data of the aircraft. According to their calculations, the bomber could accelerate to a speed three times the speed of sound. As for the flight range, this parameter was limited only by the capabilities of the crew. In theory, it was even possible to equip a bomber with a domestic unit with rest rooms, a kitchen, and a bathroom. In this case, the plane could be several crews working in shifts. However, this would be possible only with the use of powerful protection. Otherwise, the flight duration should not exceed 18-20 hours. Calculations showed that at one refueling with nuclear fuel such an aircraft could fly no less than 100 thousand miles.

Regardless of the scheme and type of the finished engine or flight characteristics, the new aircraft was large and heavy. In addition, it was supposed to equip the triangular wing with specific aerodynamic qualities. Thus, a nuclear strategic bomber needed a particularly long runway. The construction of such an object promised huge costs, because of which only a few new airfields could “gnaw” a solid hole in the military budget. In addition, the military could not quickly build a wide network of such airfields, which is why promising bombers risked remaining tied to just a few bases.

The problem of basing was suggested to be solved in a rather simple but original way. Ground airfields were supposed to be left only for transport aircraft or not to build them at all. Strategic bombers, in turn, were to serve on coastal bases and take off from the water. To this end, the Olger group introduced a ski landing gear into the appearance of the atomol, adapted for taking off and landing on the water. If necessary, the bomber could probably be equipped with a wheeled chassis, but it was intended to use only the surface of the water as a runway.

In an interview for Popular Mechanics magazine L.A. Olinger estimated the timing of the creation of the first prototype in 3-10 years. Thus, by the end of the sixties, Northrop could start creating a full-scale project of a strategic supersonic bomber with nuclear turbojet engines. However, the potential customer of such technology considered otherwise. All the work of the fifties in the field of nuclear engines for aircraft yielded almost no result. It was possible to master a number of new technologies, but the intended result was not, as there were no full-fledged prerequisites for it.

In 1961, JF won the presidential election. Kennedy, who immediately showed interest in promising projects in the field of aviation. Among other things, documents on the projects of nuclear aircraft engines lay on his desk, from which it followed that the costs of the programs were growing, and the result was still far away. In addition, by this time there appeared ballistic missiles capable of replacing strategic bombers. Kennedy ordered to close all projects related to nuclear turbojet engines and do less fantastic, but more promising things. As a result, the hypothetical aircraft, the appearance of which involved the staff of Northrop Aircraft, was left without engines. Further work in this direction was recognized as unpromising and the project was closed. The most ambitious project of the atomol remained at the stage of development of the image.


Based on:
http://secretprojects.co.uk/
http://air-and-space.com/
http://raigap.livejournal.com/
A Round Table Conference Looks At The Atomic Airplane. Popular Mechanics, #4 1957